Now that I had the chain and the design seemed to work well I started to investigate how I would manufacture these parts in larger quantities. 3d printed treads would never be cost effective and breaking chain by hand wouldn't be either. I was at the point in the product where I had a proof of concept and needed to think about taking it to the next level. I needed to think about designing for manufacturing. I wanted to keep the design as cost effective as possible and that means really understanding the manufacturing process. Parts that are designed with a good understanding of how they will be made, end up being cheaper.

Since the roller chain is an off the shelf component there is little design for manufacturing that I could do with it. Cost will come down to what I can get from a supplier, and if they will sell the parts in the manner I want.

However, the tread will most likely be injection molded. So I took a look at the design and I uploaded the model to protomolds website for a quick check. They have a nice auto-quoting system that will give you a ballpark cost and is really good at comparing design changes. It also will highlight areas of your model that need draft angles or will result in sink marks or warping. I have made a few injection molded parts, but I am far from an expert at it. So getting this kind of feedback is really helpful.

I dont often order parts from protomold because the cost is typically to high for my low volume projects, and high volume things I tend to find a cheaper supplier if you look around. Another issues is that protomold will not do any overmolding. For this part I had intended to injection mold around a threaded stud. I started to look at the cost of these studs and I just could not find a supplier that could sell them cheap enough. I think the best I could find was around $0.30 a stud. Which means that I have $0.60 in each tread piece. The other problem was that for 35 chain the threaded stud would match the holes in the chain well. But for the other sizes of chain I could not find a threaded stud that matched as well.

I also didn't like the idea that my design would not be scaleable. I really want a design that could work for all standard size chain. So I went back to the drawing board and thought that I could maybe find a dowel pin with snap ring grooves at each end. This is sometimes called a headless pin, or headless pin with grooves. Below is a photo of one.

I thought that this would be a good option because it could be cheaper than a threaded stud, and snap rings would be much cheaper than nylock nuts. They would require a special tool to install but that might not be bad. So I started to look around for these and even called a few places to ask them about it. I could not find anyone that made a pin that would work for my need. I even found a few places that specialize in making this kind of pin and asked them to quote a custom pin for me. But they said it was too small for what they did.

Next I sent out the quote to a few companies that have a Swiss Style Lathe. These are special lathes that work on parts that the length is many times the diameter of the parts. I got a few quotes back at around $1.30 a pin. Even in large quantities this was not gonna work.

I was kinda bummed and set the project down for a few days. I was not sure it was even feasible any more. Between the cost of the chain, the pins, and injection molding the project was turning out to be way too expensive. I had even emailed about 10 chain suppliers and 8 of them said they could not supply the chain as parts. The remaining two gave me a quote that was 10 times more expensive than the assembled chain. At this point it looked like I was gonna have to build a robot to break the chain and based on breaking it by hand that was gonna be a bit of work.

I thought the project was dead. I could build a set for myself if I wanted, but it would never be a viable product. I just was so surprised by some of the quotes. When I was thinking about the design the injection molding seemed like the highest cost item. The pins and chain should be dirt cheap, but everything I was finding was the opposite of that.

I talked with a friend and he mentioned that I should check out Alibaba. I had seen the site before but always kinda ignored it because the shipping form china was way too high and you would need to order very large quantities to make it happen. But I decided to take a look and get some quotes. I was blown away with the responsiveness and the prices. I got responses from the companies in less than 24 hours asking for more details and production prints. In less than two days I had quotes that put the project back on track. At this stage I was mostly focusing on budgetary quotes. So I used the best guess for dimensions and didn't add any tighter tolerances. I just wanted to know is it even possible to make this. I found a potential supplier in China for the pins and the unassembled chian.

I then took another look at my design and realized that while snap rings were a good idea, I was reinventing the wheel a little bit. Roller chain already has something like this. It is called a master link and used to connect the chain. I realized that if I designed my pins to match those of the master link clips I could use those instead. Now the assembly is familiar to people who have worked with chain, does not require a special tool, and uses another off the shelf part. I also did a little work modeling up a special inner plate that would add horns to the tread for the bogie wheels. The horn is still a work in progress. Below are some pictures that show the new design. 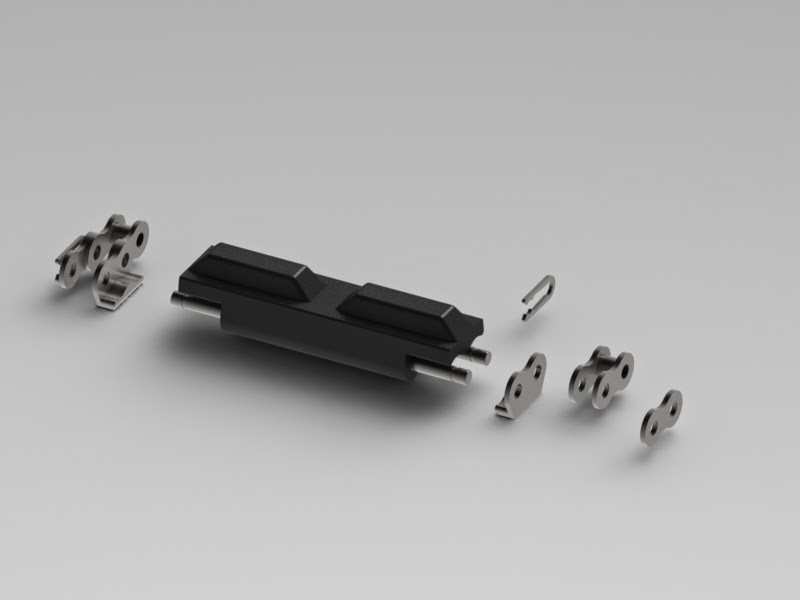 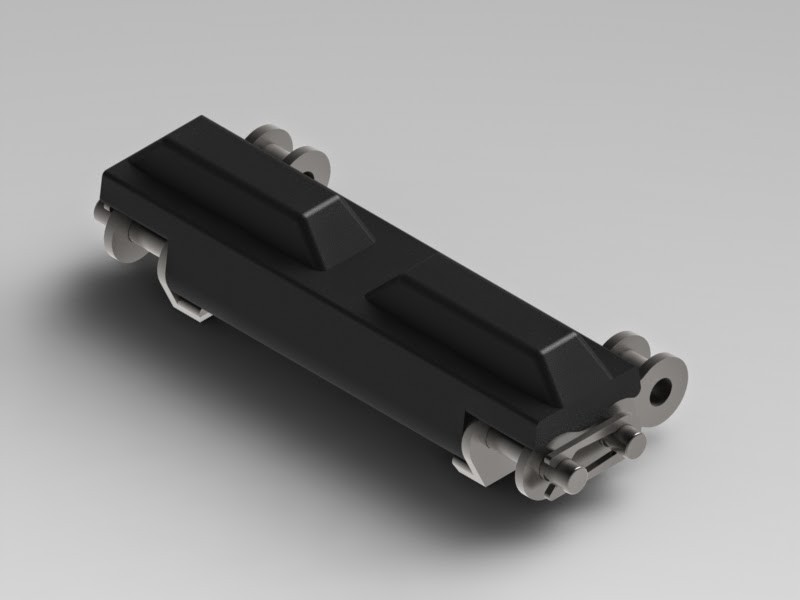 That is my plan. I am working on a prototype tank now to drive around and show it off. Cant wait to publish a video of that.

Thanks for the comment. The project started out as me designing something for myself, and kinda spiraled out of control. But it is fun and hopefully I can turn it into a product in the near future. That is if there is a market for it. Not sure anyone else cares about modular tank tracks like I do. lol

who knows, show off what you can do with them and give people ideas.

i love shit like this, nice description of the design process.  Tryinng to make something that is viable for production is much harder than it looks.