I have been quite busy with making track and trying to grow this business. I have received 10 orders in the past 45 days, which add up to over 1200 tracks. This has been quite a big increase from the first 50 that I made for my own use. I was aware that if this started to take off I would need to be able to scale up my production. Before I offered to sell any of these I had a rough plan for how I could keep up production while managing the costs. I tried to identify where the bottle necks would be and have an idea of how to solve the problems before I got to them. One of those problems was working with the resin.

The resin comes in two sizes. Pint bottles and 1 gallon buckets. Weighing out the resin without spilling takes some practice and is difficult. In order to do this in a production environment I needed something better. My standard approach to this type of problem is to look at what the commercial solution is. This is not a new problem and someone else solved it already.

I am a huge fan of this company Nordson EFD. They make awesome products and I have used them for my day job. The products are high quality and they sales team were very helpful. The standard solution for dispensing resin is a Fluid Reservoir like this one.

It is a simple pressure vessel, with a regulator built into the top and two connections. One connection is for air to go in and pressurize the vessel, the other connects to a tube that goes to the bottom of the tank for the fluid to come out. Simple enough. The only catch is that one of these things costs around $1200 or more. Since I am working with a two part resin that would mean that I need two of them. Sadly my company is not earning enough money for that. But it did give me an idea of what I should be striving for. This is the top of the line system. So it is a good thing to try and emulate.

My first idea was to use a garden sprayer. I removed the sprayer and connected it to some clear hose and a ball valve. This worked quite well. The garden sprayers only cost about $20 each. So for about $50 I had a decent set up. 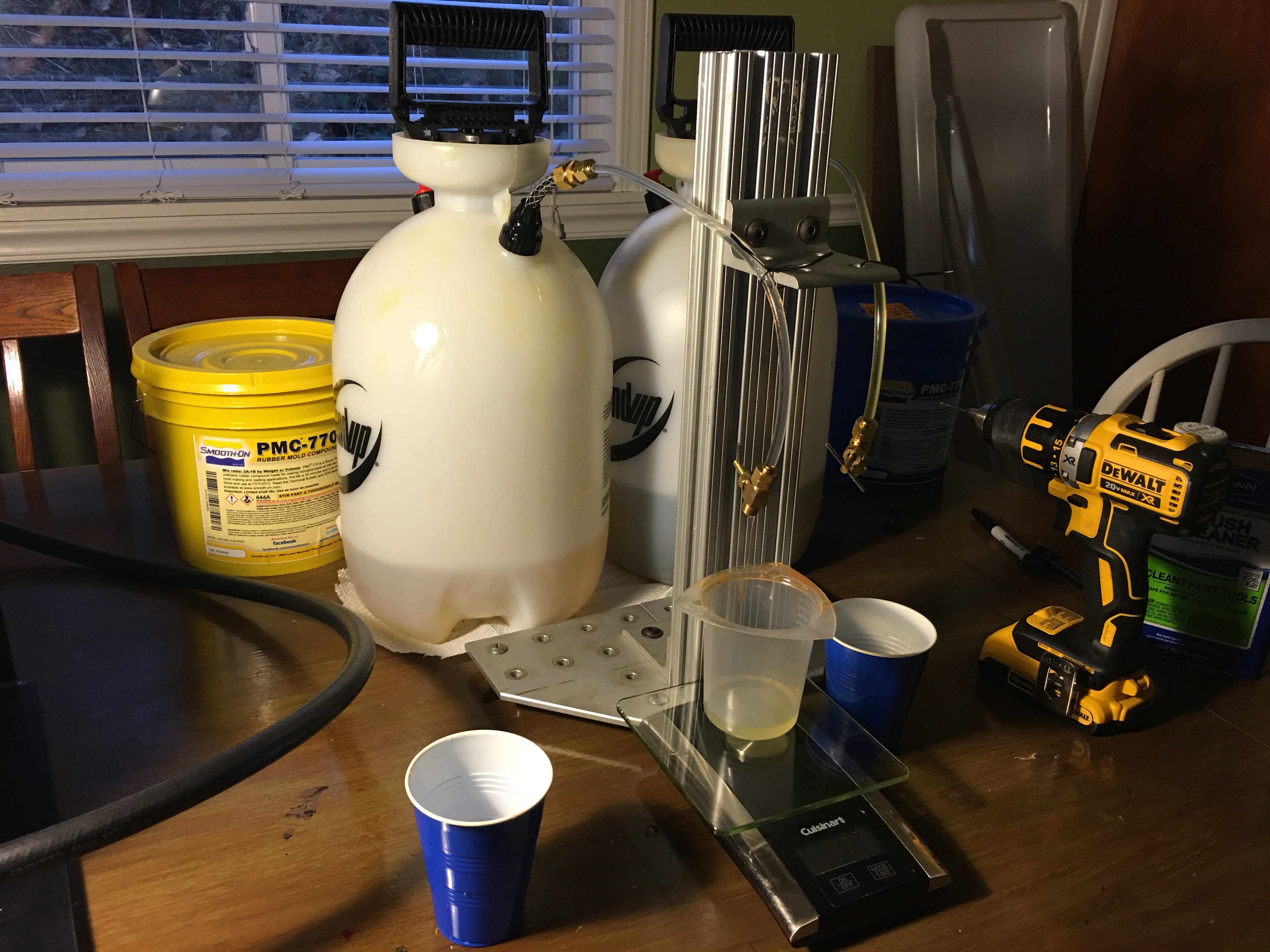 But there were a few problems. The first was I made a mess from the beginning. I got too eager and did not have tight enough connections and spilled resin a lot. The second was that the tube that goes inside the sprayer is quite small. It had about 1/16" ID. This makes sense for spraying very thin fluids like weed killer, but the resin was thick. So while it worked, it was slow. I tried modifying it a little to increase the size of this tube, but in the end there was only so much I was willing to do. I did not want to waste too much money or time trying to turn this into a better system. Another problem was that you had to pump it up by hand. This get old really quick. But this setup taught me a lot.

So while this worked and allowed me to make several hundred parts. It was time for something better. This is my current solution to the problem, and I am quite proud of it. 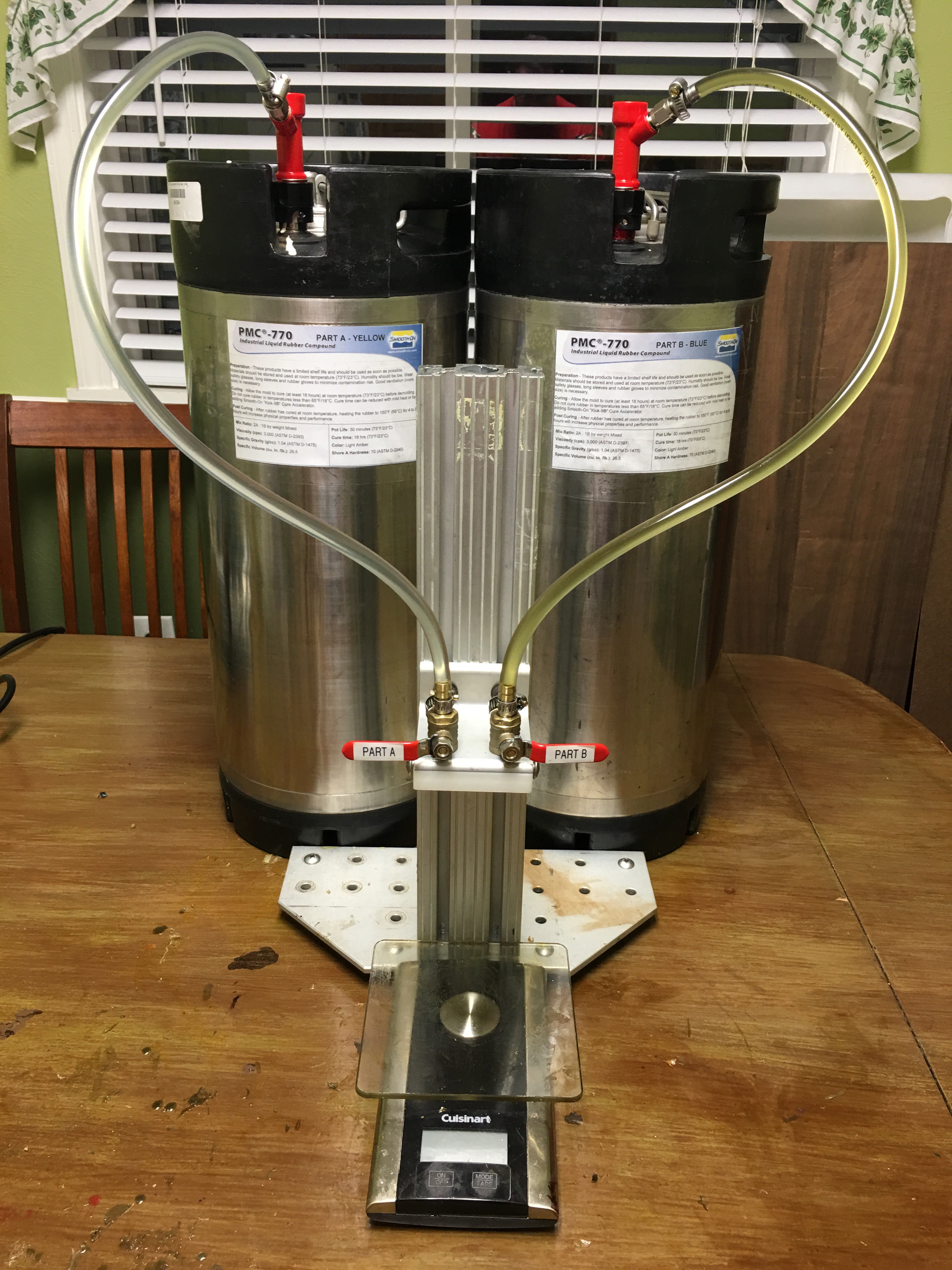 I have two friends who brew beer and they suggested I look at Cornelius Kegs. These are often used for home brewing of beer or dispensing soda in a restaurant and they worked great. These are 5 gallon versions, but they also come in 3 gallon versions. The 5 gallon ones are quite common place and I bought used ones to save money. I got these two from Adventures in Homebrewing.

Before I ordered them I compared them in every respect to the commercial solution.

All in all they seemed to be quite similar. The commercial version is shorter and fatter, with a lid that is fully removable. This makes it easier to clean and also might make it possible to put the resin in without removing it from the shipping container. For me this would not be an option because I could not fit 2 gallons of resin in it. The corny keg on the other hand could hold two full batches of resin at a time. This would be 4 gallons of resin in one, and 2 gallons in the other. (2:1 ratio resin). The smaller opening does make it harder to clean. But hopefully I wont have to clean it ever, and worst case I can buy a new one.

One other issue with the corny keg is you can not draw a vacuum on them. The lid is designed in such a way that the pressure seals it. So I can not vacuum degas the resin in the kegs. Well not yet anyway. I think I have a easy solution to fix that down the road. 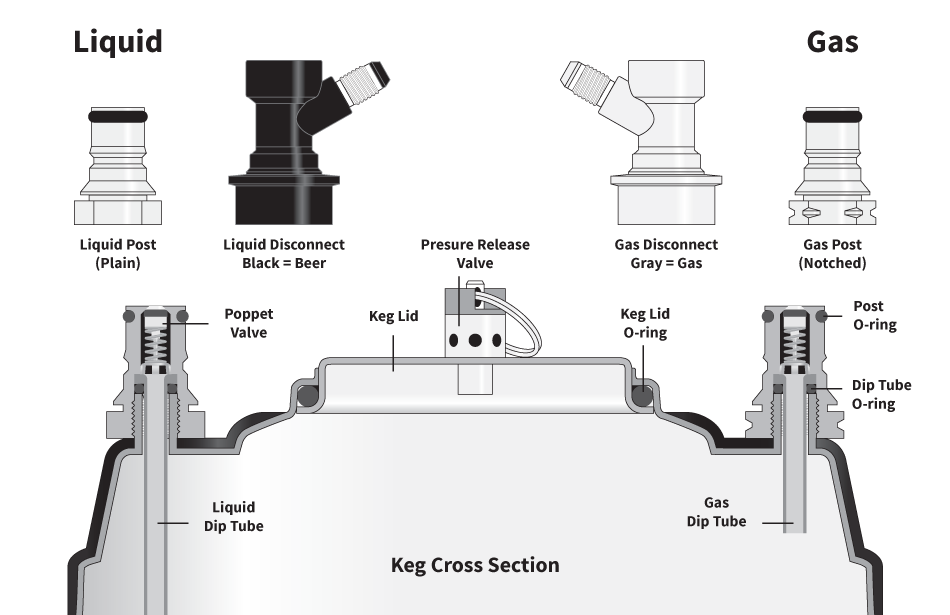 Another concern was the way the kegs dispense the fluid. The keg posts have a part called a poppet. This is basically a pin with an o ring held in place by a spring. The keg disconnects lock on and press down this pin. This is similar to the valve on car tires. And allows you to remove the hoses from the keg without depressurizing it. I was not sure if the poppet would cause a problem. The resin is quite thick and anything in the way could restrict the flow. But they do sell a conversion part to removed this and replace it with a standard 1/4" male pipe thread. I figured I would give the default design a shot and if it didn't work I would replace it.

I ordered two sets of these disconnects that came with barb fittings. This made it quite easy to connect the keg liquid side to my previous ball valve based dispensers. For the gas side the disconnect has a male flare fitting, which happens to be the same size as the flare fitting on my vacuum degassing chamber. When I ordered the hoses I got a three pack which is common for A/C recharging equipment. I used a few fittings to make a compressed air quick disconnect to male flare fitting adaptor. So using that I was able to connect my air compressor to the kegs gas side. It worked quite well and because I was using the keg disconnect I only needed on to presurize both kegs.

I pressurized the kegs to 35 psi and they seem to dispense the resin quite nicely. All in all I think this is a really good system for working with large amounts of resin. The parts are all inexpensive, commonly available and replacement parts are easy to find. I would be interested in anyone comments or ideas for improvement.

awesome project/approach, i really appreciate the thought process....but... this $350 commercial option may be a good solution for you http://www.michaelengineering.com/Pumps/Manual/ (-:

Maybe you could add a ring with a rubber seal on the bottom, such that when you pull a vacuum on it it would seal the other way? something like this?https://onedrive.live.com/redir?resid=A0BA2C9B67B2DC8A!2048&authkey=!AKRkbtDZaybthKk&v=3&ithint=photo%2cjpg

Yep, that was basically my idea. I would just have to make a second lid basically. I don't think it would be too hard, but honestly so far I have not needed to degas the resin in the kegs. I mix it in small batches and degas it in the vacuum degas chamber I made. Thanks for the advice.

That is another good idea. I had not seen those before, but it is basically the same thing as the $1200 version. I was surprised that the keg system flows the resin as well as it does. As my company grows and I get more orders I think being able to store 5 gallons of resin at a time will be nice. Honestly, this stuff is messy and a pain in the butt if you dont control it. Being able to weigh it out without spilling any, has made my life so much better.

nice idea, will have to keep this in mind next time I need a pressure tank.  They also make vessels for paint spraying that are cheap and could be similarly retrofitted.  http://www.harborfreight.com/2-1-2-half-gallon-pressure-paint-tank-66839.html