The nice thing about technological progress is that even once innovative technologies are considered outdated at some point. And outdated technology is cheap technology. So it comes that one can buy the first generation of digital xray image sensors on ebay from time to time for just 100-200€. This isn't particularly cheap, however these things were sold for ~20k€ once.

When I bought my first DigiPan back in January 2018 I didn't know anything about it. There is close to no information about these sensors on the Internet, not even the sensor resolution or the interface. All I knew was that when you shine xray light on it, some sort of images has to come out of it as this thing was used (and probably still is) for dental xrays. And as it was sold with a PCI card I felt rather confident that I would be able to render this thing useful. This is about how I got it running and what you can use it for.

Before I got the DigiPan delivered, I did some research on the internet and was rather disappointed to find nothing about this sensors at all. However I contacted a guy on a medical support forum that seemed to know about Trophy devices. As it turned out this guy had all the documents I could have wished, including pinouts and confidential powerpoint presentations. Without his help I probably wouldn't have come so far yet.

First challenge was to get the DigiPan powered. The only connection is a 8-pin DIN plug on a ~20cm long cable. Both power and data goes through this connector.

Here is the pinout of a similar type of DigiPan as mine, pinout is identical for both:

Unfortunately RS422 is only a specification of the physical layer, not the actual protocol. So it was still unclear how this thing sends out image data. However, RS422 is a mono-directional interface and there is no second RX channel. This means the panel can only send out data, it can't receive anything from the computer. This is nice, as this means it doesn't require any magical initialization commands or settings transmitted to it to operate normal. It works standalone, which makes it perfect for further reverse engineering

With this information I was able to power my DigiPan once I received it. Applying the 5V is enough to get the digital circuitry running. In fact there is a relais inside that only lowers the CCD and analog circuitry during exposure.

From the support manual I knew that the DigiPan sends out a test image at powerup. It is a greysgale gradient with the resolution of a typical x-ray scan.

First goal was to capture this image and display it. However, first we have to understand how this sensor actually works:

The actual CCD sensor has a resolution of 1244 x 61 pixels. While today's image sensors use a 2D image sensor with the size of the required area (up to 200 x 200mm, which is basically a whole silicon wafer as a single image sensor), this DigiPan sensor has to be slided during exposure. It is basically a 1D sensor that has to be moved to generate 2D images. From what I know, this also means maximum image witdh is unlimited as the data isn't buffered, but streamed out during exposure.

But wait, why does the sensor has 61 pixels in x direction then?

X-rays are rather weak, especially in medical context. So to get well exposed images, long exposure times are necessary. This isn't a problem for stationary 2D image sensors, but as this thing moves, long integration times would cause motion blur.

In order to achieve both high sensitivity and fast movement Trophy uses a trick called time delay integration (TDI). This works by having multiple (61) rows of elements which each shift their partial measurements to the adjacent row synchronously with the motion of the image across the array of elements. 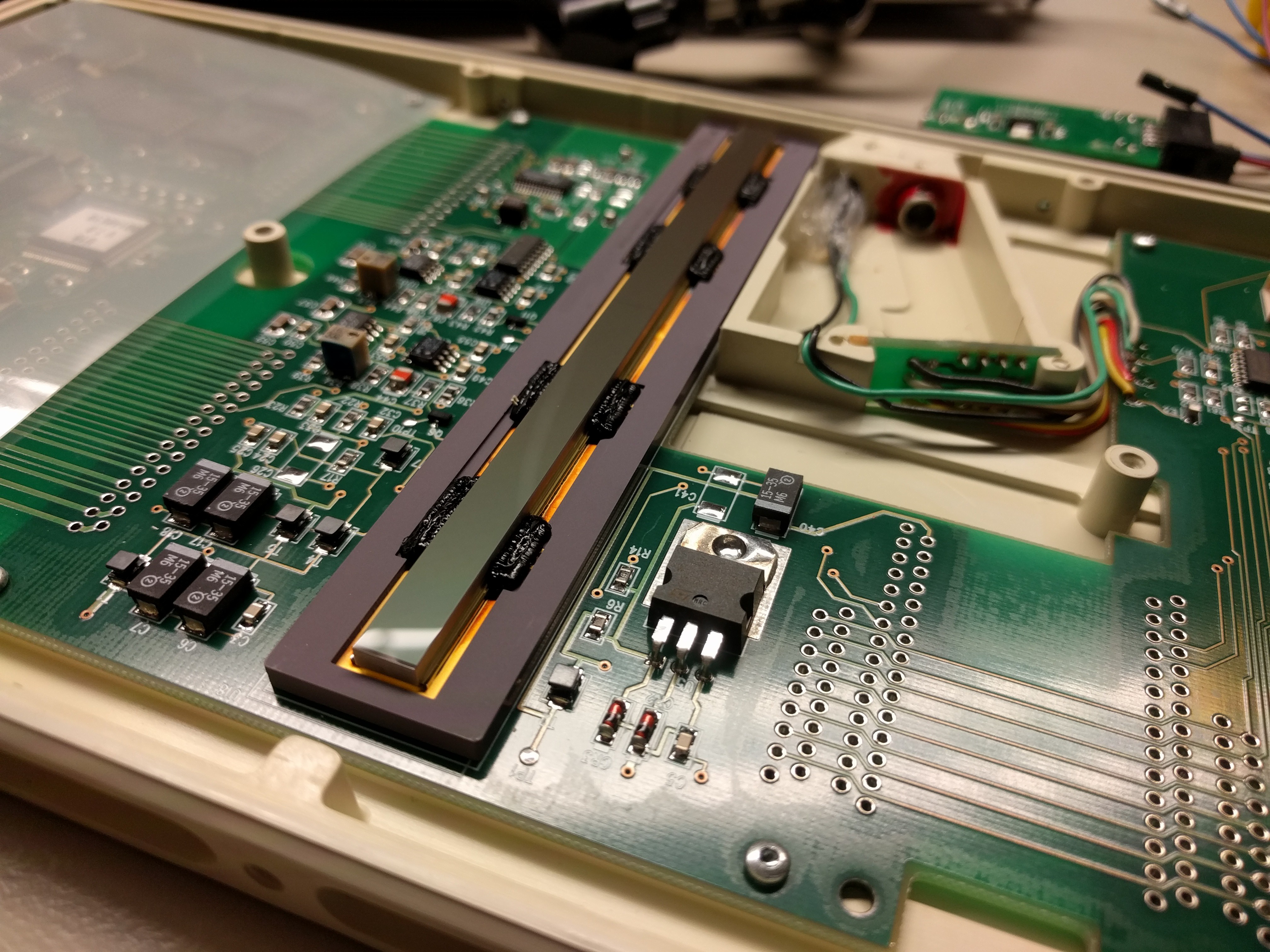 Here you can see the data sent out by the DigiPan at powerup. Sampled with a Saleae China clone at 24MSa/s and PulseView:

Some measuring revealed a bit rate of ~7.9MHz. The crystal next to the cpu on the DigiPan pcb has 16MHz, so it's 8MHz. The protocol contains one Start bit and no Stop bit.

The actual data is 12bit + 1 control bit that seems to be always 1. The 12 bit data is the actual ADC reading of each pixel. Data is streamed out pixel by pixel, line by line, 1244x 13 bit data packets per CCD line.

This is very similar to genuine UART, however UART usually has baud rates of 9600-115200 and 8 data bits + 1 stop bit. Sigrok-cli already has an UART decoder, however only for these standard values....

Does your sensor output any data when moved without any x-rays? I get the grayscale image at startup and hear the relay for the +-15V click when it starts moving in the right direction. But there's no output on the RS-422 lines. Is it broken or does it need to see x-rays to start sending? (I tried it without the metal cover, but maybe the scintillator crystal doesn't transmit enough visible light.)

EDIT: Okay, I read your last post...it needs to see x-rays. That gives me hope, that the sensor is not broken :)

I'd rather use one of the 2D sensors, but the only one I got from ebay thats not completely broken has a cracked sensor and scintillator and only half the area is usable :-(

On a related topic: Where'd you get your sweet microfocus source? I've been searching for one of those for ages -.-

This sensor have 61 pixel not because its old but because it's used in dental tomography - tube unit and detector are sniping around patient head and make all tooth image. https://en.wikipedia.org/wiki/Panoramic_radiograph

I like your project, I was thinking when I read the part where you mentioned the linear encoder. Is it possible it need that barcode lines read on the ccd, because it is absolute encoder, so the cpld is calcating the positios, and it is triggering the ccd. I think the ccd is not velocity controlled it is actually position controlled. In case the mechine loses power, after the power restored, the encoder still know where it is. It is my theary sorry, If it is not the case.

I saw a simmilar setup, Where is a head with Mini ccd inside and it is reading a linear barcode. It is called renishaw resolute.

No it is not an absolute encoder, it's purpose is to determine the velocity and direction the panel is moving.

hope you have your lead underwear on ---

All safety precautions are complied with, also have a dosimeter for direct radiation warnings.

Very cool! Would love one of these for verifying BGA placement on PCBs. Glad to see it's within reach should I ever come around to it :)

That is why we bought these, but its pixel pitch is not quite fine enought. However, we are working on reverse engineering a better sensor. :)

Hackaday Prize 2019
Based on a large (60mm) linear CCD I want to build a digital back for a medium format camera. A Teensy 3.6 will be used as main electronics.
Project Owner Contributor