A Breakout board for Atmel's SAMD20/D21 Series Microcontroller

The project here on http://hackaday.io was created after I had finished (ish) the 32-pin variant of the breakout board. It is compatible with both the SAM D20 and D21 lines from Atmel, using the D20E / D21E variants (E corresponds to the 32-pin variants).

The PCB uses the reference designs in the datasheet for the SAM D21, which was checked against the SAM D20 datasheet to make sure there were no major conflicts. The D21 has full speed USB 2.0 Host and Device, so there is also a USB footprint, with some supporting components (Micro USB Socket, ESD protection diodes, and a filter for the cable shield).

I've crammed as much as I could onto the PCB, with the intention of only populating the footprints that are necessary for each application. Below is the schematic broken down into its relevant parts, with a brief explanation. 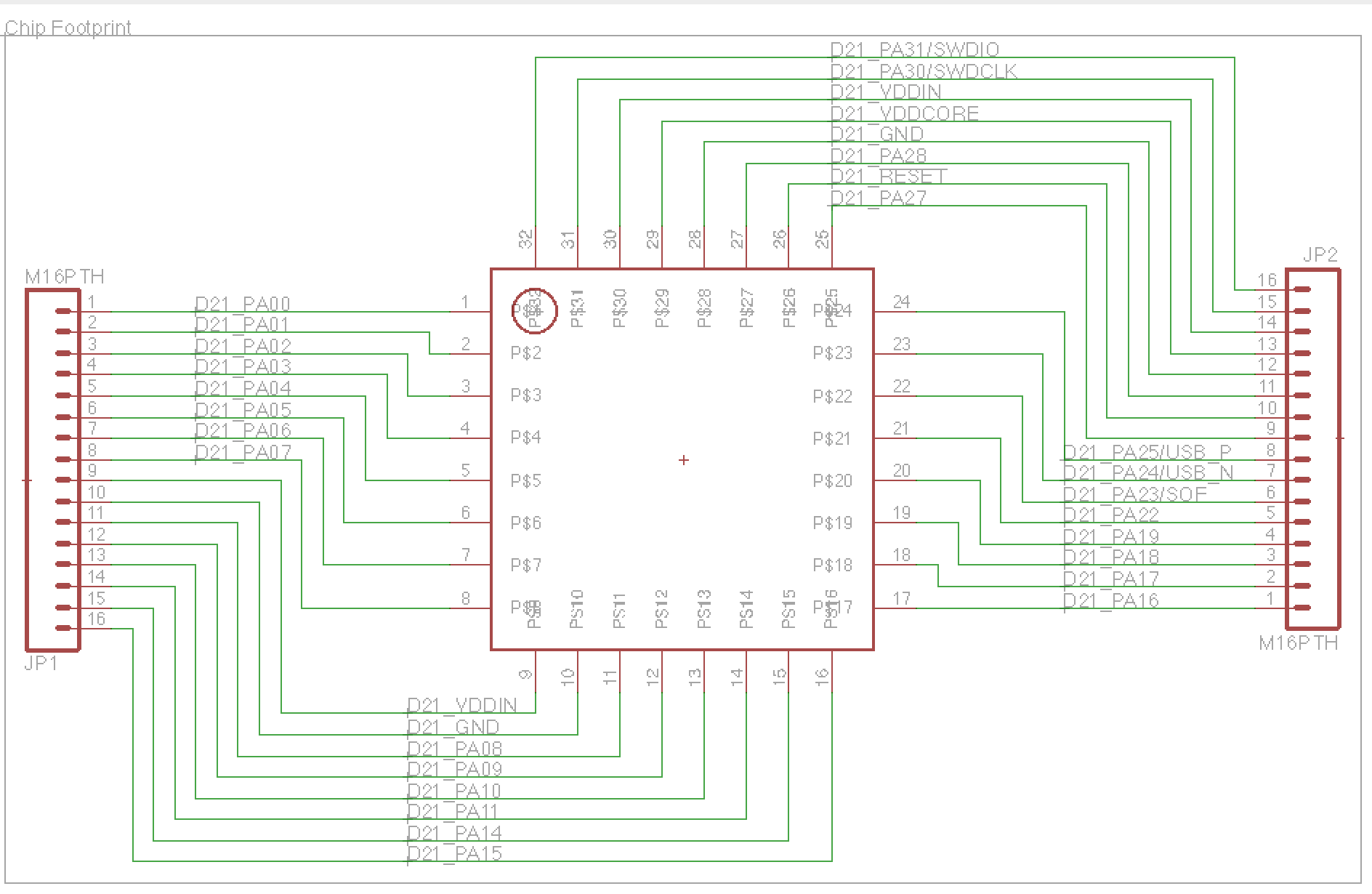 The 32-pin footprint, with all of the pins connected to the two 16-pin breakout headers. These are standard 0.1" pitch headers, with one on each side of the board. All of the nets are named and labelled.

Standard parts for most microcontrollers. These help smooth out the power lines. 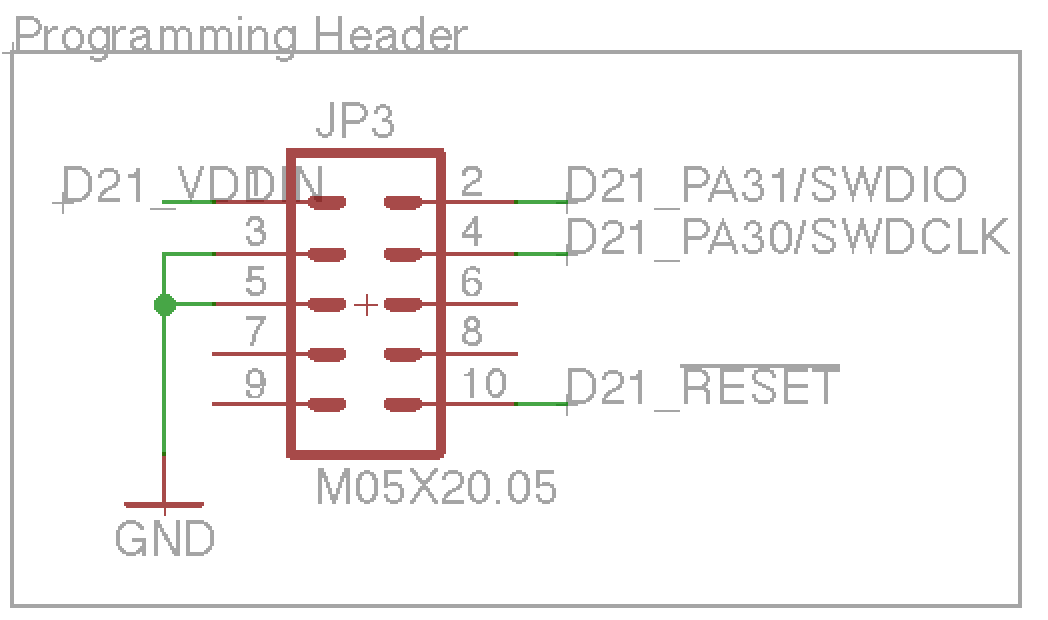 Unlike the ever popular Arduino, these chips do not have a nice bootloader pre-programmed in (The D21 does have an example USB bootloader in Atmel Studio 6, but you'll still need to program it onto the chip!). The pins are 0.05" pitch, as per the standard Cortex Debug Connector. The pin headers for these are a little expensive, so I plan to make a breakout board (gotta love the breakout boards!) so I can connect the programmer to pogo pins, and then just use the pads on the board. 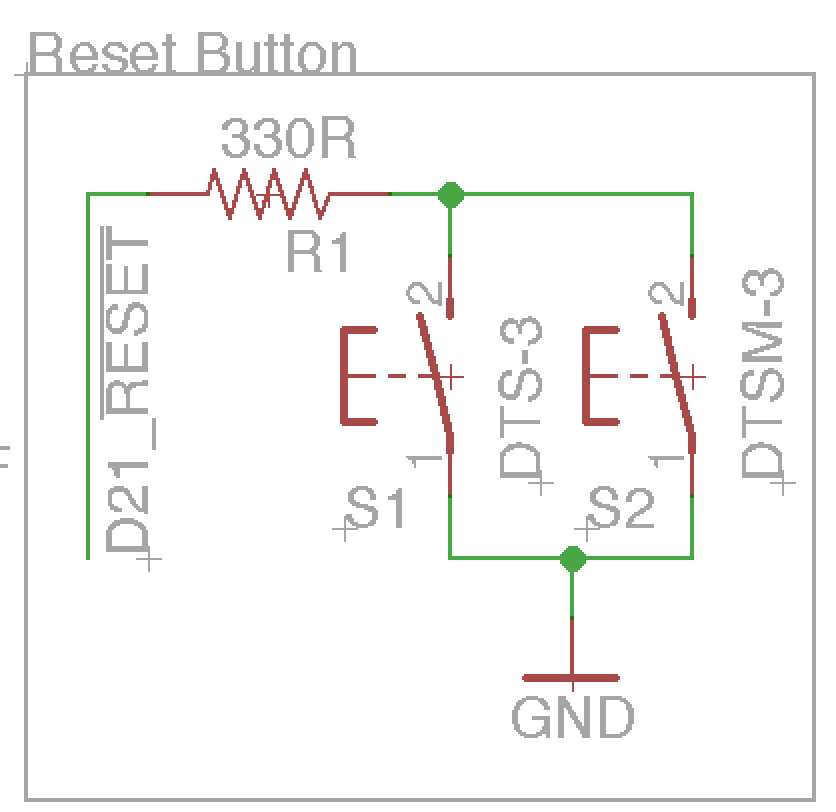 Into the optional parts! Sometimes, power-cycling a board can be a little tough, especially if you're doing a lot of resets during development. For that need, comes the very popular reset button! The usual 6mmx6mm tactile switch was far too large to fit on my PCB, and my usual distributer (Farnell UK) seem to have a sparse range of thinner switches; as a result, there are two footprints, one for a surface mount DTSM-3, and one for a DTS-3 through hole variant. The footprints are on top of each other on the PCB, to minimise the space usage. 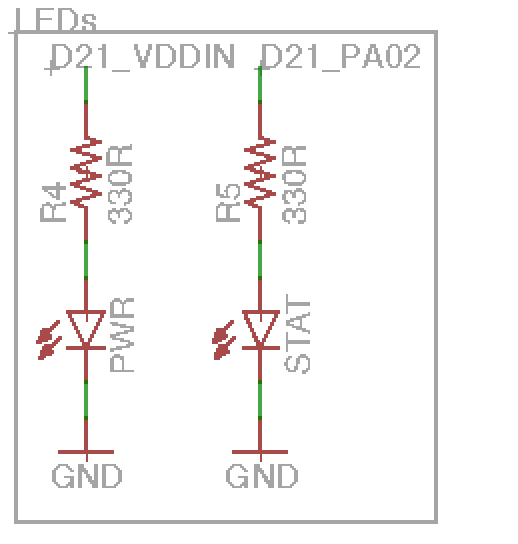 Two LEDs here; one for power, and one connected to an IO line on the microcontroller. The power LED is directly connected to the VDD line on the microcontroller. The resistor values here are just placeholders, they'll need recalculating depending on the specific LEDs that are used, and the voltage the board is powered at (usually 3.3V, though 1.8V would be common too). 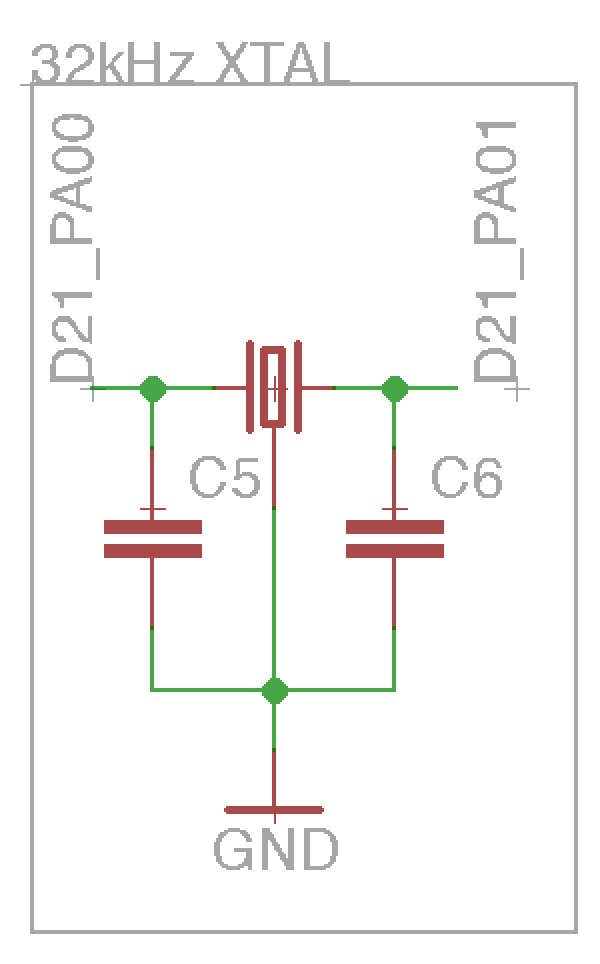 The usual oscillator pins do not have a footprint for the crystal, as the SAM D20/D21 range has a good onboard oscillator that (through clock multiplying magic) can clock the microcontroller at 48MHz. However, there are separate pins for a 32.768kHz oscillator, and I quite like the idea of RTC capability; therefore, there is a lovely footprint for that on the PCB instead. The capacitors don't have a given value, as it will vary dependent on the specific oscillator chosen. 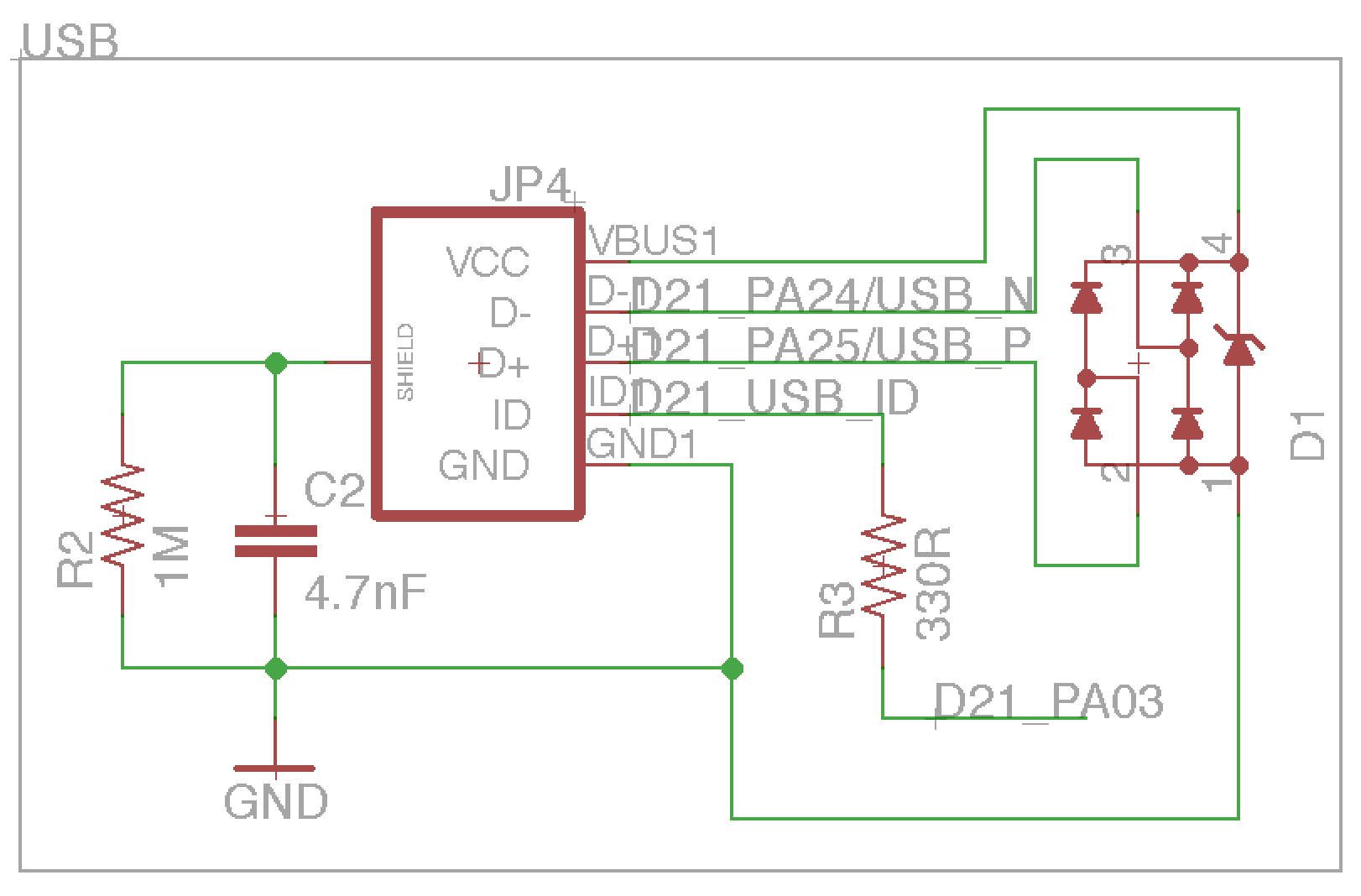 The SAM D21 has full speed USB 2.0, both device and host! To use this capability, the board has a micro USB connector. The D+ and D- (Data lines) have a TVS (transient voltage suppressor) on it for ESD protection. This is an extra measure, and the diodes inside this package are all in parallel with the signal, so this can be left unpopulated and the USB will still work. The shielding on the USB acts as a large antenna, so R2 and C2 act as a filter before it's connected to ground. The values for this come straight from the SAM D21 datasheet, but these components can either be omitted, or bridged with a 0R resistor if you would like the shield grounded. R3 on the USB ID line is used to limit the current through the 5V line to the 3.3V tolerant pins; again the value for this is straight from the SAM D21 datasheet.

Whilst the SAM D20 doesn't have USB, that doesn't mean it wouldn't benefit from a USB connector! USB provides a lovely 5V (ish...) supply. In this case, only the connector would be necessary, though the shield filter may be a good idea. 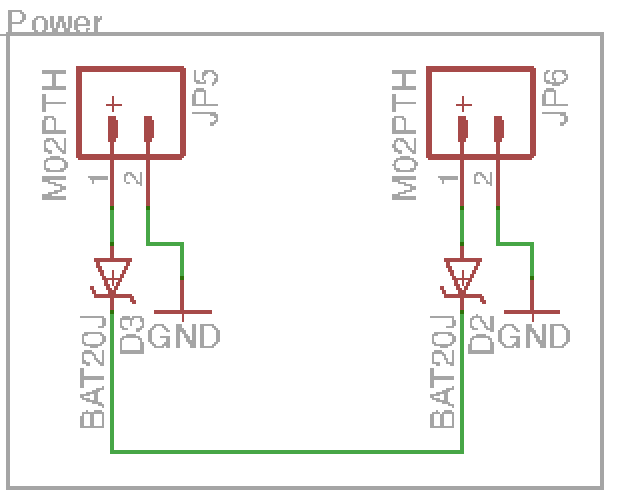 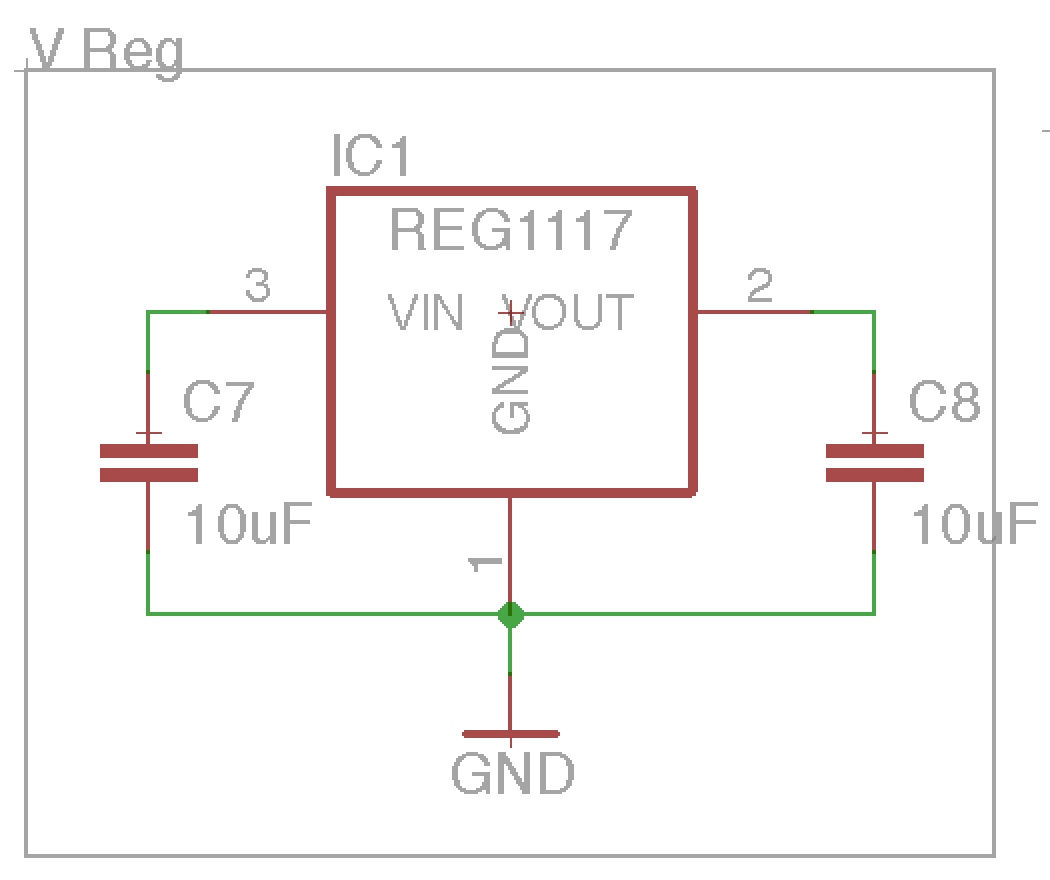 When I get a little more time, I'll add a post about the PCB layout.

Any questions, just add a comment or send me a message!

question 2 , i did not see the inductor recomended in the datasheet , or the ferrite bead as they call it , can it do just fine without it?

this is great. I  ordered some SAMD20's and they are just sitting there waiting for a breakout board. And i will  moste definitely be using these schematics .  Question ; The number 1 pin of the programmer , does that have to go to VDDIN or just power? I think it measures the voltage at the chip right? otherwise it could just go to the power rail