Hey everyone, I'm very happy to announce support for the BeagleBone Black today!

As per custom, here is the BBB rev 3 displaying itself with VGATonic! 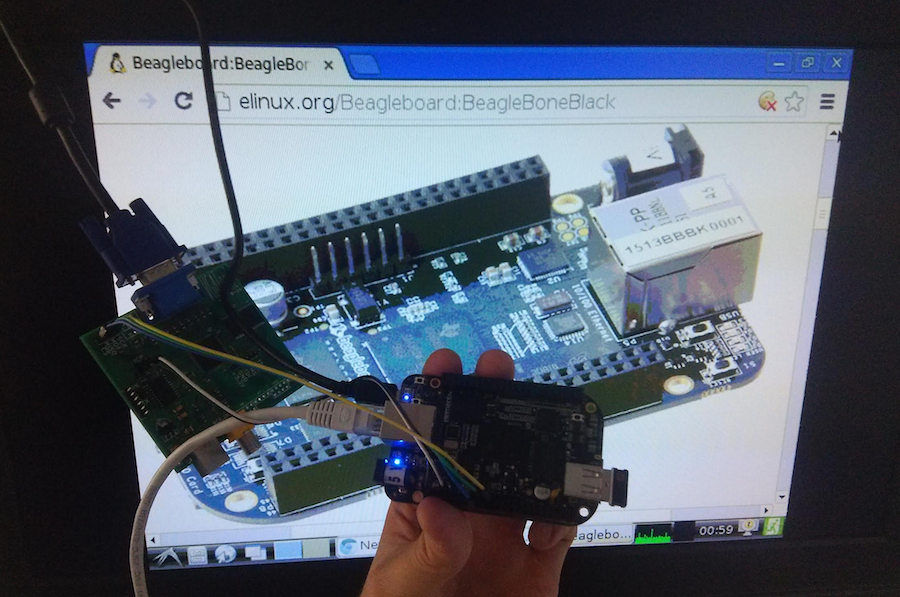 Unfortunately, we had a few difficulties in getting VGATonic to run on the BBB (an initially frustrating yet ultimately successful experience!).

First, SPI DMA seems to be broken, which is a major issue with the BBB since the SPI driver in the kernel automatically does DMA when over 160 bytes are sent (we send 307,200 for 640x480x8bpp mode...). I'm using a 3.8.xx kernel and had some issues upgrading due to missing scripts, however it does appear this bug cropped up again even in recent kernels. I'll revisit it when there is a fix, though, since I would like to squeeze out maximum performance on the popular BBB, and I think it was working at some point in the 3.14.* kernels. (Please ping me if you see an update or know more!)

It was an easy enough workaround, though: write 159 bytes at a time, maximum. VGATonic's main driver needed an update to support this, but it does seem a useful feature (it looks like the Edison will need something similar). Here are the gory details of how that function works now. It should be relatively self-explanatory, but let me know if you would like more explanation:

In theory, the BBB is an excellent candidate for VGATonic since it can support 48 MHz SPI. That's a nice 19.5 Frames Per Second worst case for 640x480x8bpp (and over 60 for most other modes!). Unfortunately, due to SPI overhead due to the small transfers and not using DMA, most functions are closer to 7-10 FPS (Dropping to 320x240 on the BBB looks excellent though, and often maxes out the 60Hz refresh!). Here's an example of what I mean, where mouse movements can drive SPI to take up 50% of the CPU: 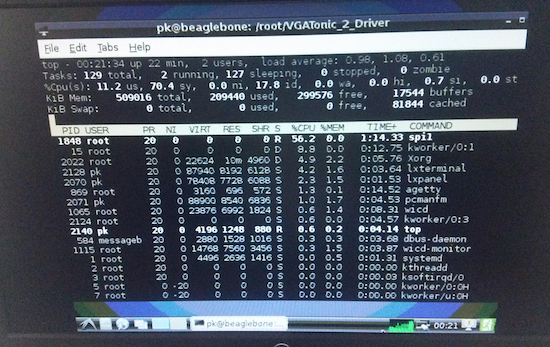 I will say this, though - it's very usable even with the 159 Byte sends - a credit to a nice platform! I'm happy to update the driver when the SPI issue is fixed - or if I can find a kernel where it is patched already. But, for now, this is a great start - let me know if you get it working!