Using an android phone and an arduino, my kids can open the garage door at home without an external keypad

I have a house with a 3 car garage. It isn't huge, there are two doors, one small, and one large. I know on the large side we can't put our two cars in, and open the car doors. There are still two doors, each with their own openers. The remote controls in the cars work great, but you need two, if you want to open both doors. Yes, I know they sell learning controls that will open both, but what about when you just want to open the door when not in the car? I have tools and such in the garage, and sometimes I need something, and the car may be in the garage. 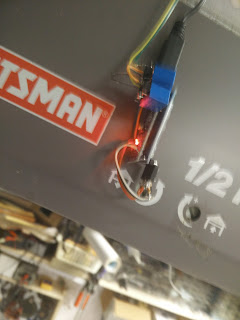 I always have my phone in my pocket. Is there a way to have the phone talk to the opener? Not the stock openers, only a special opener. Well I have a bunch of Arduino stuff, and a phone that talks bluetooth, can they be connected? Well, sure they can. Again I experimented using the ArduDroid an Arduino Mega and a Bluetooth shield. Nothing to it, that all worked great. Then I moved on to a 6 pin HC-05 module and the mega, and that worked as well. The HC-05 isn't any bigger than a Arduino Nano, so I tried that. That worked as well.

Once I had all the Arduino hardware working, it was time to do something quick with the Android. The ArduDriod has an OK interface, but I wanted something that looked like it belong. I didn't want to do a full blown app, so I looked at my options. I ended up choosing App Inventor. It is probably as much work as writing an app, since I had a lot to learn, but I was able to learn the app inventor and as a result I have an app that will open and close the garage. 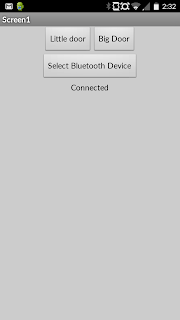 There are 3 buttons and a label. The buttons cause the relay corresponding to the door labeled to close for about a second.

I updated the GUI, so it isn't just "Big Door", "Little Door" and made the app a little more robust. It remembers the last Bluetooth device, so pairing is a little more automatic. The change to the GUI allows users to click on the door they want open, and it opens. Someday, I may put in sensors so the GUI could show the current state of the doors (so when I go to bed, I can look, and know if I left any doors open). The app inventor project is at this link. 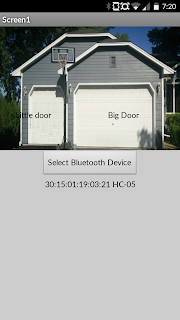 I re-did the wiring in the garage as well. I used to have a spiderweb in the ceiling with droopy wires from the access door to the openers. Who ever installed the openers or the wiring must have run out of staples, and there were like 3 for the two openers. Now all the wiring goes through the attic, with the central wiring on a barrier strip.

The sketch I didn't change, but I noticed I didn't upload that either. I'll give that a go as well. The sketch isn't doing anything really complex. It is still based on ardudroid.

The relays are connected to the Arduino using an NPN transistor. One relay each on pins 7 and 8. The power supply is my old Motorola Razr charger (mini USB). The HC05 is connected using the TX and RX serial pins, so they need to be disconnected if connecting to the USB port to program the Arduino. Also Have a look at the Ardudriod page for the resistors and 3.3V connection. (Don't try 5V and don't forget the resistor on the RX pin). Remember the module is receiving on RX but sending to the TX pin.

There have been a few things I don't like about it, but overall it is serving it's purpose. Pairing basic HC05 modules with and Arduino isn't as quick or automatic as I'd like it to be. Of course, sometimes the signal is going through an aluminium door on the way to the module, so I can't blame anything but circumstances.

Internet of Things in 5 minutes