This project shows how to use the MLX90621 16x4 IR sensor array from the Raspberry Pi to add basic thermal imaging to your pi for under $100. It is a part of my ongoing project to build a general purpose electromagnetic scanner (prototype picture on left).

This Project is provided under the MIT license, enjoy ;-)

The MLX90620 and MLX 90621 are 16x4 remote temperature sensors. Both operate via I2C. The MLX sensors are very affordable and work well. The only drawback is that the sensors are designed for 'production line' so their 16x4 aspect ratio is not ideal. You can see in the picture of the thermo-data overlaying the camera image that we get a 'strip' of temperature data that runs either horizontally or vertically across the middle of the image depending on orientation.

Aside from this one drawback, they are pretty awesome little sensors. They will work from 3.3V but prefer a bit lower voltage. So it's prudent to connect a small rectifier diode in series with th positive power (a 1n4001 works nicely.) Other than that, wiring is the same as any I2C device-

You'll also need to make sure that i2c is enabled for your Raspberry Pi. (A pretty good guide on that is here- http://www.raspberrypi-spy.co.uk/2014/11/enabling-the-i2c-interface-on-the-raspberry-pi/)

Finally you'll need to enable the pi camera if you wish to run the 'mlxview' example that's included with the mlx90621 user space driver.

(If that command is not found do 'sudo apt-get install i2c-tools'.) 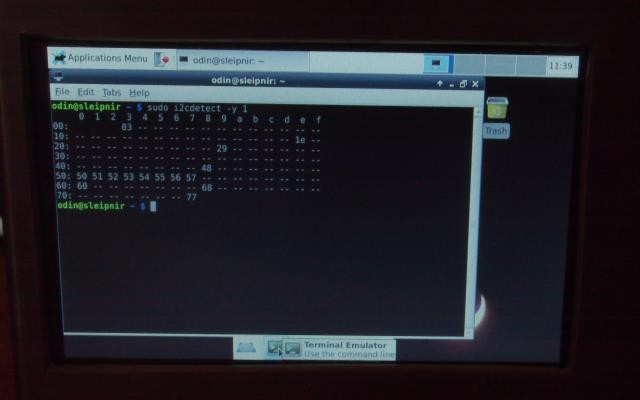 Once you can see the MLX90621 with 'i2cdetect' you can download and install the mlxd code from github.

The mlxview.py application is an example app that grabs the thermopile data and attempts to superimpose it over the feed from the raspicam. It has a few python prerequisites. So if you want to run it first do -

(There may be other prerequisites I'm unaware of because I already had them installed. But those are the big ones...)

Here's a short video of the mlxview.py demo in action-

I keep getting MLX9062x init failed

Hi, l need to interface raspberry pi 3 with mlx90640 and picamera, does anyone try this, can help me? Thank you

Hi, i have the problem that i can see the live picture from the picam but without overlaying the thermal image from the MLX90621.
i get
'pi@raspberrypi:~/mlxd $ python mlxview.py
/usr/lib/python2.7/dist-packages/skimage/util/dtype.py:107: UserWarning: Possible precision loss when converting from float64 to uint8
"%s to %s" % (dtypeobj_in, dtypeobj))
^CTraceback (most recent call last):
File "mlxview.py", line 90, in
fifo = open('/var/run/mlx90621.sock', 'r')
KeyboardInterrupt'
then.
Can anybody help me please?

Update: Following does not work

I have checked in fixes at https://github.com/svtechie/mlxd

Update: Code is available at https://github.com/svtechie/mlxd

Hey Charles, I'm seeing exactly the same issue as John. I have tried to debug it but not sure what's wrong. Any suggestion?

I'm using an MLX90621 and I can't seem to get this to work. I get detection of the MLX90621, but when running mlxd I get the init, but no temp. Seems this is what a lot of folks are seeing as well. Any thoughts?

John, I am seeing same issue. Were you able to resolve it?

John, I have fixed the issue on my end. Going through remaining code.

Your pins are reversed in your main description above. It caught me up for an hour.

everything fine also but i also get the message: "Ta = nan C nan F", anyone has the solution?

Hey Kenneth, were you able to resolve this issue?

I have fixed the issue on my end. Going through remaining code. Will update!

Quick question.   Do you think it is possible to work with multiple MLX90621 sensors on the Raspberry PI?   Possibly leverage 4 sensors into the mix, rather than a single sensor?

Sorry for the delay responding. Verify that you have I2C enabled, i2ctools installed, and that the device is visible when you run 'sudo i2cdetect -y 1'. (If you see all dashes in that grid, your sensor may be mis-wired.) See the I2c portion of this page - https://learn.sparkfun.com/tutorials/raspberry-pi-spi-and-i2c-tutorial

Anybody knows where to get these sensors in the UK ?

okay, I have solved the problem.

Hello, I also got the "command not found" problem and your suggestion to daihael did not work for me. Please help

Its working fine. But i have a problem with output while run the sudo mlxd & comment and its output is "Ta = nan C nan F". is this error or just an output

now i have a problem with the output. i get the message: "Ta = nan C nan F"

Did you get any solution for this output message??

is it just the command "sudo mlxd &" and what for is this command actually ?

mlxd is the driver daemon. It needs to run as root (hence the 'sudo' at the front...) It sounds like mlxd is not in your PATH or the current directory. Try the full path to the daemon. - i.e. : 'sudo /full_path/to/mlxd &'

Sorry for the slow reply. Sounds like your issues are hardware related. First make sure you are only supplying the MLX with ~2.7V by placing an 1n4001 diode in series with the power supply... Next double check your SCL/SDA lines. (If one is grounded out then ALL of the addresses will show as active in i2cdetect... If they are reversed or not connected, then nothing will show up.) Also make sure you've got i2c enabled on your Pi both in raspi-config and in /boot/config.txt (and /etc/modules)

Once you have i2c working the daemon should (hopefully) be able to connect.

Also double check against the datasheet to make sure it's wired correctly.