Working to kick start the robot revolution. It is coming, and the Kasei Initiative will play an important role.

For the Hackaday Prize, my chosen problems to attempt to solve are a need for companionship by just about everybody and the expense of companion robots. The ultimate goal is, as the description says, to bring in a new age- an age where robots are intelligent and both humans and robots can live in harmony:

“There was a time when humanity faced the universe alone and without a friend. Now he has creatures to help him; stronger creatures than himself, more faithful, more useful, and absolutely devoted to him. Mankind is no longer alone. Have you ever thought of it that way?”

My community? Humanity and robot kind is my community, and I am determined to be a leader in this glorious revolution that will make the world a better place for everyone. 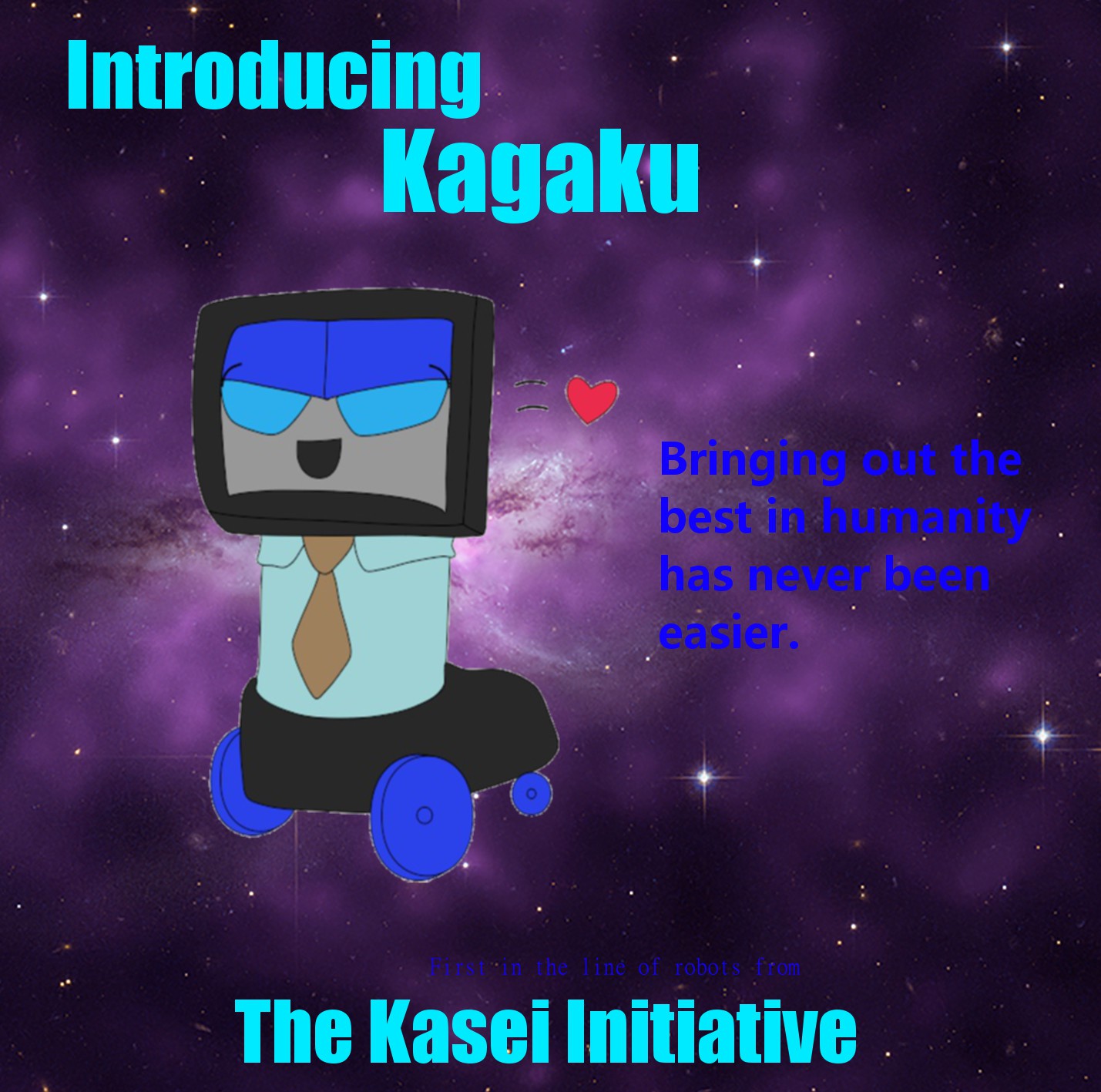 (Productized artist's rendering. Background image from nasa.gov: http://www.nasa.gov/mission_pages/chandra/multimedia/ngc6240.html NASA does not sponsor or endorse the Kasei Initiative and I am not affiliated with them in any way.)

Since children are more likely to take to friendly, remote-controlled companion robots than adolescents or the older generation generally would, Kagaku, being the first in the upcoming line of robots in the Kasei Initiative, will be geared primarily towards children. Software features (a special thanks to my mumsy for brainstorming some great ideas) would include:

- Basic reminders that can be put in

- Emotional support with an interface that lets the user tell the robot how he/she is feeling (try to cheer the user up, remind user to take a break, etc.)

- Help child with bedtime routine (programmed potentially by parents, w/ GUI or keyboard input; "It's bedtime!", "Did you put on your pajamas?", "Did you brush your teeth?", "Would you like to hear a bedtime story?", etc.)

- Remind user to do homework, after school functions ("I believe there is a snack waiting for you in the kitchen!")

Because of its affordability, a Kasei Initiative robot could be in many households all over the world, and, if a partnership can be acquired later on, a charity fund to send some to those in economically crippled areas. The possibilities are endless!

Other robots in the Kasei Initiative line could include companions for the elderly, companions in a hospital setting, and other robots custom tailored for different uses, such as mental health issue support. For now, though, we're going to focus on Kagaku with some of the features above.

How this will alleviate problems stated in the description:

1. Refer to the quote in the description from the book "I, Robot" for the companionship/loneliness portion. I think it sums the solution up better than I can.

2. Most commercial robots are several hundreds to thousands of dollars. Using inexpensive hardware that's open for everybody to use, household supplies and other inexpensive materials, a companion robot can be made within the $100 to $200 range, potentially even less if you know where to look. 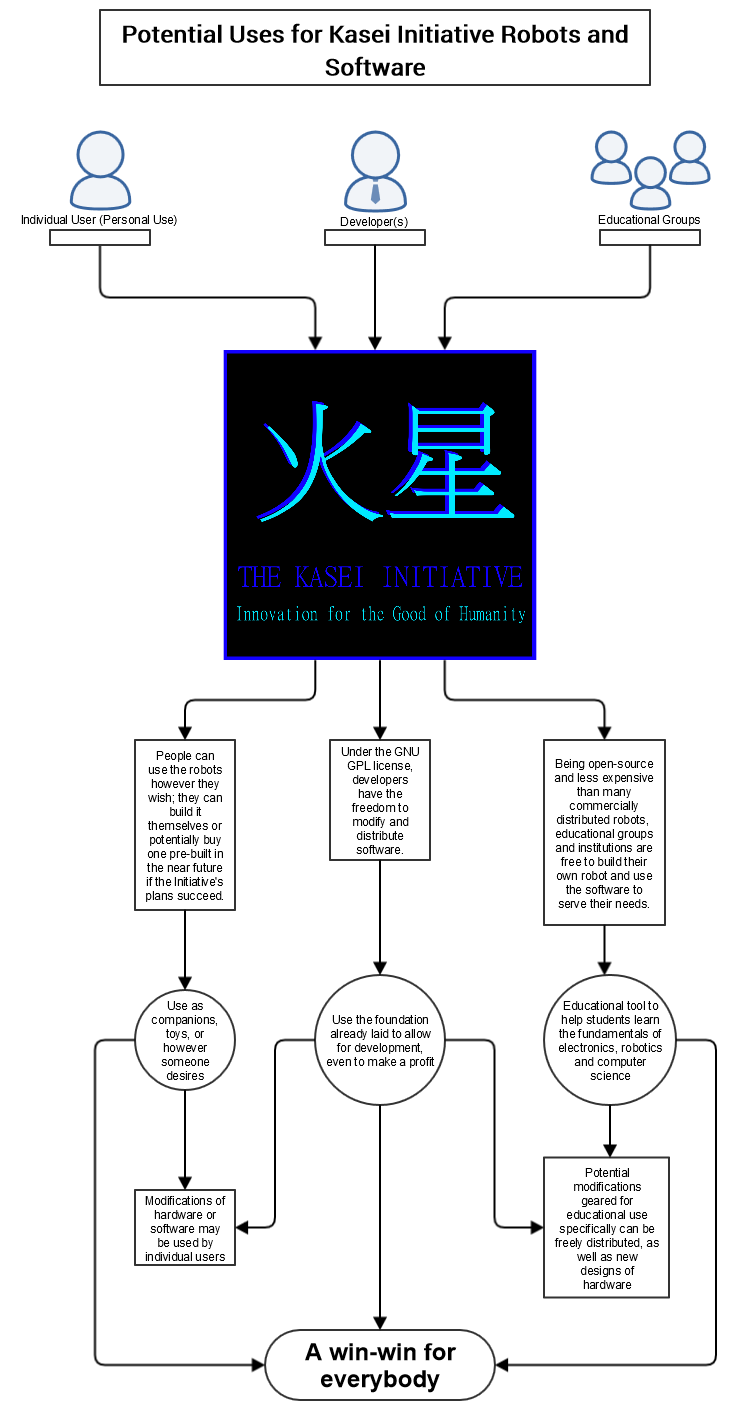 - Have a personality coded that can be interacted with

- Have a foundation for creating an affordable robotic companion; as for the ultimate goal of the Initiative (extending far beyond the scope of the contest) will be to start a robotic revolution.

- To create a sentient robot within the allotted time (I USED to be this naive; not anymore. This is a very long term goal, but it is a goal.)

- To make any promises about what will and will not work; in all honesty, AI is still in its infancy, so development will take time, and no matter what anybody says, there basically aren't any right or wrong solutions just yet. Just because one method seems to be working well for AI doesn't mean it'll be the one that brings a robot revolution. However, I will do whatever is in my power to make the Kasei Initiative be a leader in such a revolution, as it is coming, and it's going to be great.

- To deceive anybody; I see many huge companies who thrive off new technologies like 3D printing and exploit it with restrictive patents and licenses, and I hate that so much. Trust me- and I hope you will grow to trust me through what I do and say- I am not that sort of person. I will be honest in what I do; if it doesn't work, it doesn't work (see my "Ehhh" project log about the microcontroller)! Also, I love open-source technology, and I will make this an open source project, no matter how successful the Kasei Initiative becomes.

I hope I can count on your support, and any questions you have, ask, and I will (hopefully) be able to answer during a weekly blog post on the Kasei Initiative Site, which is linked on my Hackerspace.

A separate one will come for the software...