The detection technique we have chosen for this project is based on the measurement of Electrolytic Conductivity [wiki], which is a solution's ability to conduct electricity. This measure contains highly valuable information on the contents of a solution as its conductivity is proportional to the sum of the Total Dissolved Solids (TDS) [wiki]. Measurement of TDS is typically used as an aggregate indicator of chemical contaminants in the study of water quality, particularly relating to agricultural runoff and industrial pollution. Our system utilises this principle in combination with a separation technique to detect specific substances within the TDS. We apply a technique called Capillary Electrophoresis (CE) [wiki] which separates the solution into a series of ionic bands that migrate past a stationary detector at varying times, allowing for individual substances to be identified and quantified.

Conductivity detection has been employed in CE and chromatography for some time however the initial iterations employed a contact-based approach, typically a fixed eC/TDS probe, which came into direct contact with the solution. While this technique is highly sensitive the electrode is subject to degradation, this causes measurement drift due to heterogeneous oxidation of the electrode surface which diminishes the machine’s precision and operational lifespan.The full potential of the technology was realised with the introduction of contactless detection systems, which led to the development of the technology we have chosen: Capacitively-Coupled Contactless Conductivity Detection (C⁴D). C⁴D utilises the wall of the capillary as a dielectric to wirelessly transmit an electrical signal through the solution which is attenuated by the change in resistance due to the ion concentration. 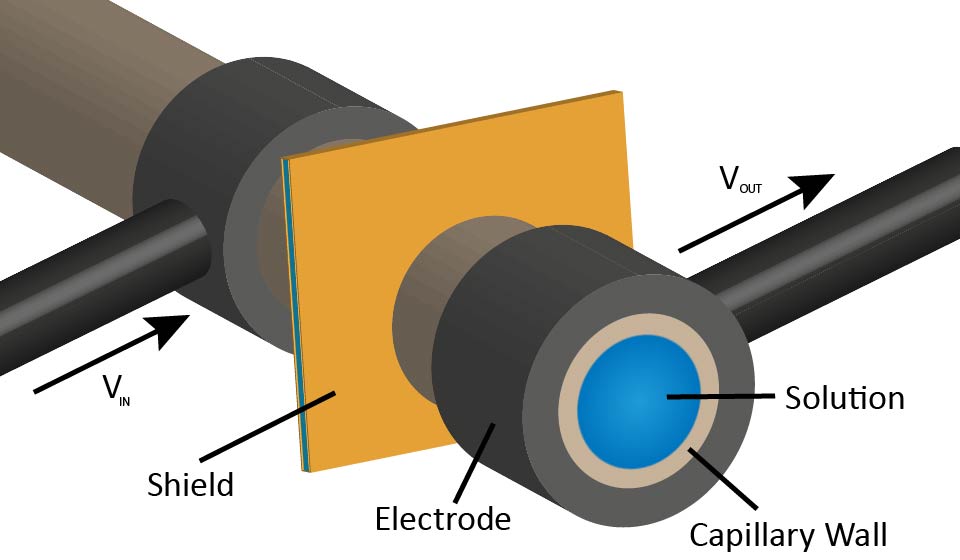 The C⁴D technique allows for a much simpler transmission and receipt of the excitation signal over typical light (UV) and contact-based (TDS) detection, without expensive image sensors and complex capillary windows. The versatility of using C⁴D with the CE separated samples means that by manipulating only a few simple parameters of the system almost any substance can be identified and measured. This replicates the function of most Ion Specific Electrodes (ISEs) by utilising a separation technique to get the desired solute by itself, in place of specific electrodes for each solute. The relative simplicity of this technique makes it a highly versatile yet low-cost way to detect the presence of substances in a sample that is highly suited to automated sampling and reporting of water quality.

The measurement of electrolytic conductivity is achieved by measuring the resistance of the solution. Measuring the resistance involves passing an electrical signal through the solution and measuring the attenuation of the signal as different ions pass the electrodes. Contactless detection in a Capillary Electrophoresis (CE) systems couples electrodes to the capillary forming a picofarad capacitor, which requires a high frequency input signal to transmit current through the solution. As ions pass through the electrode the change in resistance of the solution R causes a change in the resultant current I=V/R. The current of the output signal is converted to a voltage by a transimpedance op-amp (current-voltage conversion) which is then synchronously demodulated into a DC voltage, cleaned of noise and sampled by an onboard ADC. The flowchart below describes the components and operation of our detection circuit. 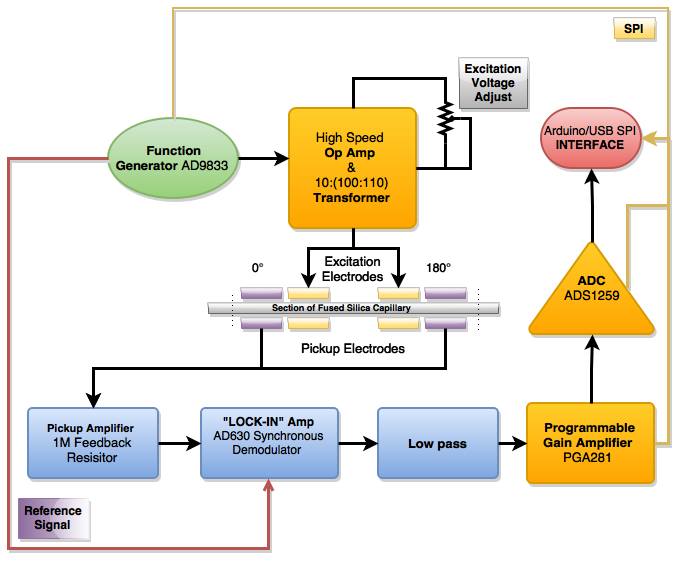 Great Motivation well written. I'm working on a basic EC probe as we speak. Do you happen to have a link or two handy to any literature on the subject of AC frequency and polarisation of the test liquid?

I'm working on a Nutrient Dosing Pump for hydroponics [PeePonics] and I would like to keep the cost down to a minimum by using a DC EC measurement depending on the loss of acurracy.