Finally, I have a microphone

Using a microphone in speaker cabinet as feed-forward, to extend low frequency range of audio system

This is what I did:

This microphone works. But its response is too quick. 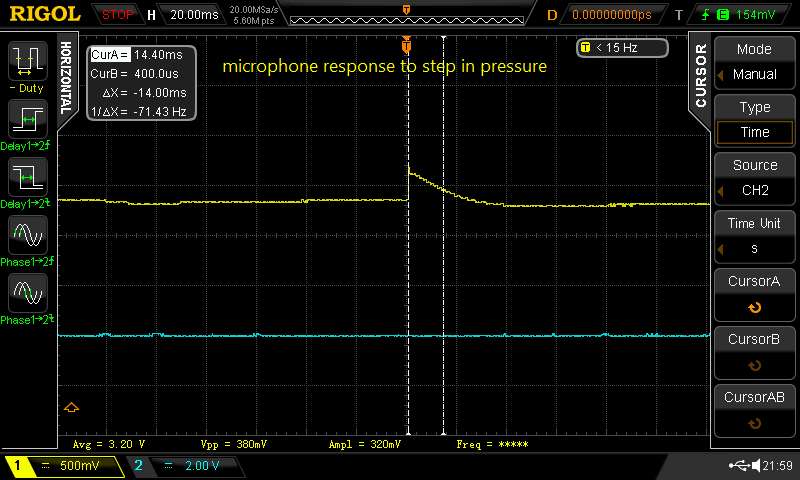 And that is something that took me a long long time to figure out. Because I didn't go straight to testing step response. I just tested it at 40 Hz sine wave as before, verified that the sensitivity is just right, and went straight to making circuit. That circuit did do something, and the speaker was giving out some very nice sound. I assembled it into a nice portable thing, and took it with me the next day. To find out that outside, it went crazy and started to self-oscillate.

Then I found out that it was extremely sensitive to temperature of the microphone. And only at that point I started measuring responses.

The thing is, that response (its decay time) is very sensitive to temperature. It is very related to leakage currents of jfet, which depend exponentially on temperature. It is caused by the capacitor being discharged through the gate of JFET. I estimated that at room temperature, gate-to-source leakage resistance is about 20 GOhm, not 20 MOhm as was stated in the datasheet.

So I needed a way to increase the response decay time at room temperature.

I achieved that by adding that feedback capacitor (15 pF) I initially wanted to, across jfet's gate and drain. That was a...

...Success!! (oops, I forgot to capture a screenshot!)

See that capacitor inside the transparent blob of photocurable epoxy? I hope you do... I forgot to take a picture before putting the blob.

So now I have my feedbass working more-or-less as I wanted to, and in the next project log, I will publish frequency responses of the speaker!

The effect of feedbass, measured.