The PCB design should not only be about connecting the pads together. This is the end goal, but reaching this goal should be done following guideline instructions. 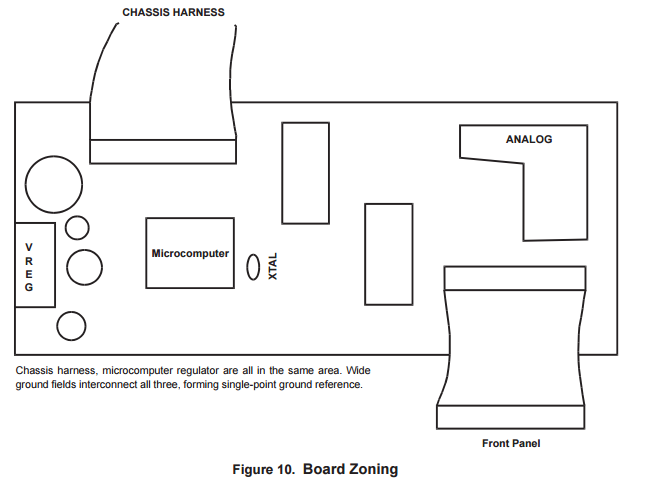 As we can see from the image, high speed logic including the microcontroller are placed next to the power supply. As we move away we start placing slower components. And at the far end we have the analog components. This will keep the analog signals clean, grouped and isolated from any interference caused by the digital signal.

Zoning and placing is not only about components. It should also be applied to power planes and signals. The power planes on a 4 layer PCB should be consistent. It is possible to divide the planes into multiple ones (for example digital and analog) but the areas should be predefined. Also the designer should make sure that the signals do no cross from one plane to another. All digital traces should go on top of the digital ground plane and similarly all analog traces should run over the analog ground plane.

As a general rule the bypass capacitors should be placed as close as possible to the corresponding pin. Series resistors should also be placed next to the micro-controller pin that they connect to. And to reduce manufacturing time and thus the cost, component orientation should be consistent for neighboring components. In polarized components, try to keep the polarity in the same direction.

PCB constraints are not there to make your life harder, actually setting up all the constraints upfront will make the design easier.

This is often referred to as the black magic design of PCB layout due to it complexity and ever changing conceptions. It is always good to follow manufacture recommend layout procedures and guidelines when available for the component, make sure to check the datasheet and application notes for this. The following are general rules that will help along the way.

The below set of rules should be followed to avoid complications during manufacturing.

The video below shows the tombstone effect on one capacitor. Notice how the paste is more hot on one side causing the capacitor to twist vertically.

The image below was taken from Understanding DFM document. It shows the effect of acid traps and small copper silvers.

In the PCB guideline of Eurocircuits, they describe acute angles and acid traps as “Peelables" 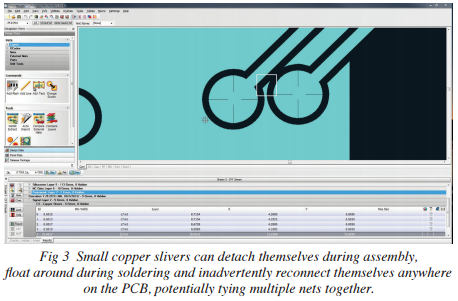 This is just a brief guideline for PCB manufacturing. Make sure to visit the referenced documents for more information. If I have missed something important make sure to mention it.