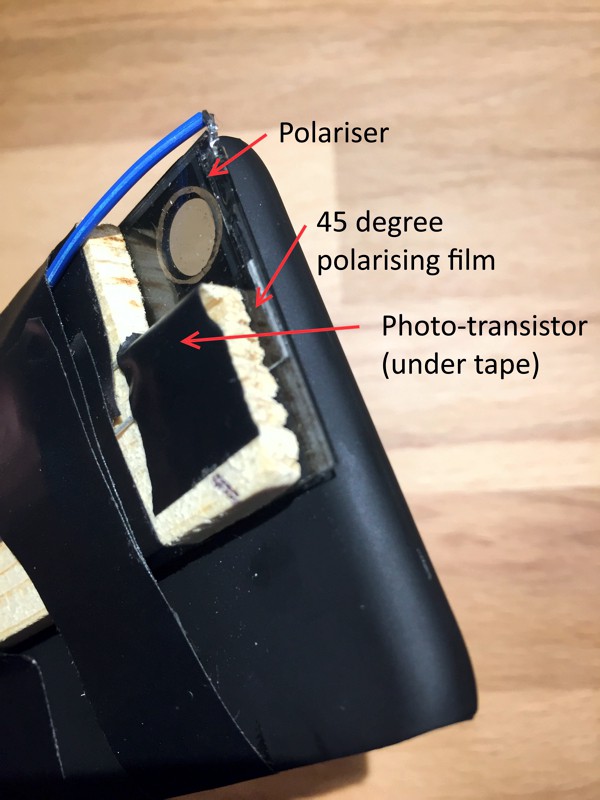 Reader Paul Wallace contacted me to tell me about the DOLPi electro-optic polarization camera that he built for his iPhone. His ingenious solution makes use of the iPhone's flashlight to calibrate and synchronize the control of the polarization analyzer (hacked from a welder's mask as described in the DOLPi whitepaper).

The drive voltage at which quasi-45 degree rotation of polarization occurs varies over time, so Paul used a phototransistor to detect light from the iPhone's flashlight that passes through a 45-degree polarizer on its way through the liquid-crystal panel. By varying the drive voltage across the liquid crystal panel, a minimum in transmitted light occurs when the 45 degree polarizers cross. As shown in the following picture, this level can be detected and used to set the corresponding 45 degree voltage reference:

The iPhone’s flashlight is also used to synchronize the change in polarization with the image taking. The iPhone blinks the flashlight after every three images have been taken. The device uses this flash to reset the 0,45,90 sequence to a known state.

Paul provides details of the Arduino-controlled circuit, its firmware, and the iPhone app in his webpage: http://ynformatics.com/2016/iphone-polarisation-camera/

Thanks Paul for sharing, and kudos for your very ingenious solution!