A g-code filter to smooth out 3D-printing process

3D printers designed or made by the Hackaday.io community

The idea of SplineTravel is to generate a smooth path for traveling to avoid stopping the motion of the print head. SplineTravel is a stand-alone g-code processing program, that takes the output from a slicer and replaces straight travel commands with smooth paths.

Currently, apart from smoothing out the motion, it also features a seam concealement technique, which seems capable of completely eliminating blobs where perimeter loops start and stop.

The project is in alpha state. It works, but the UI is very raw, and it currently only tested over a limited range of settings of one slicer (Slic3r).

SplineTravel is currently doing two things: smoothing out travel moves (the original goal), and concealment of seams (which I came up with when fighting communication choke when combining smooth travel and retraction)

This is done by computing exit velocity after preceding build move, enter velocity of the next build move, and creating a Bezier-curved travel path that matches exit and enter velocities. The Bezier curve is generated so as not to exceed a user-specified acceleration limit.

Retraction and unretraction are injected into the travel g-code, so that the printer doesn't have to stop moving. There is an experimental support for raising Z during the move, but I couldn't get it work on my printer. 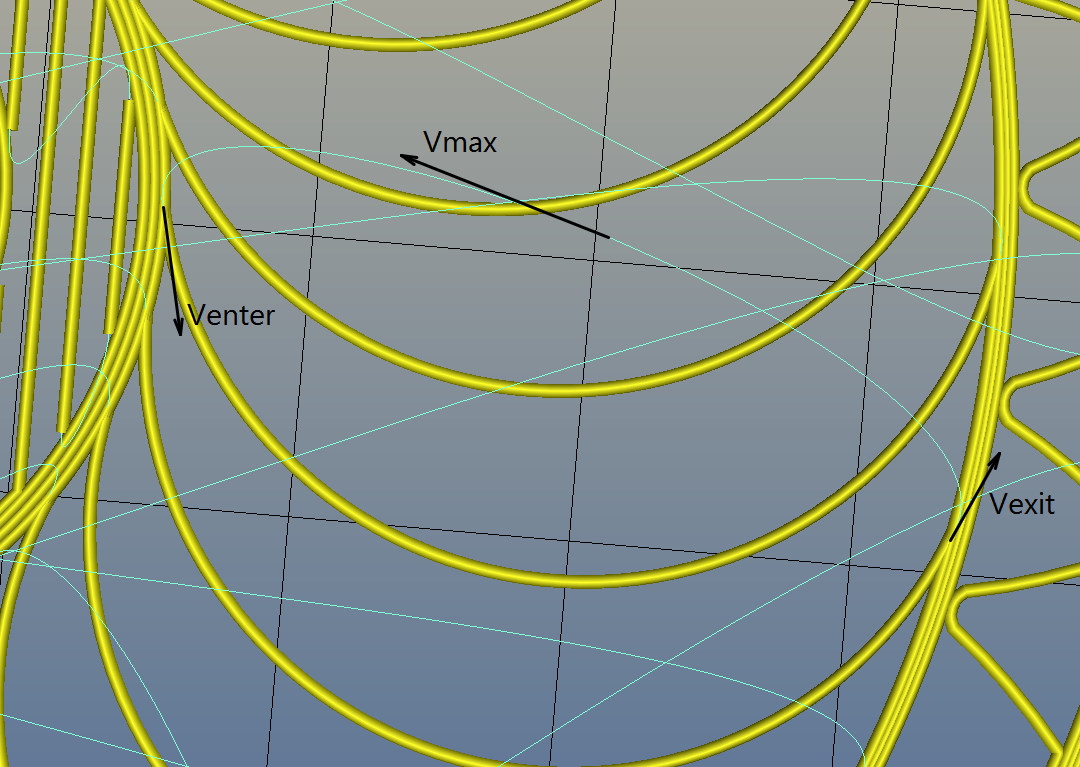 This is done similarly to Slic3r's option "Wipe while retracting", but:

This is only possible for looped perimeters. 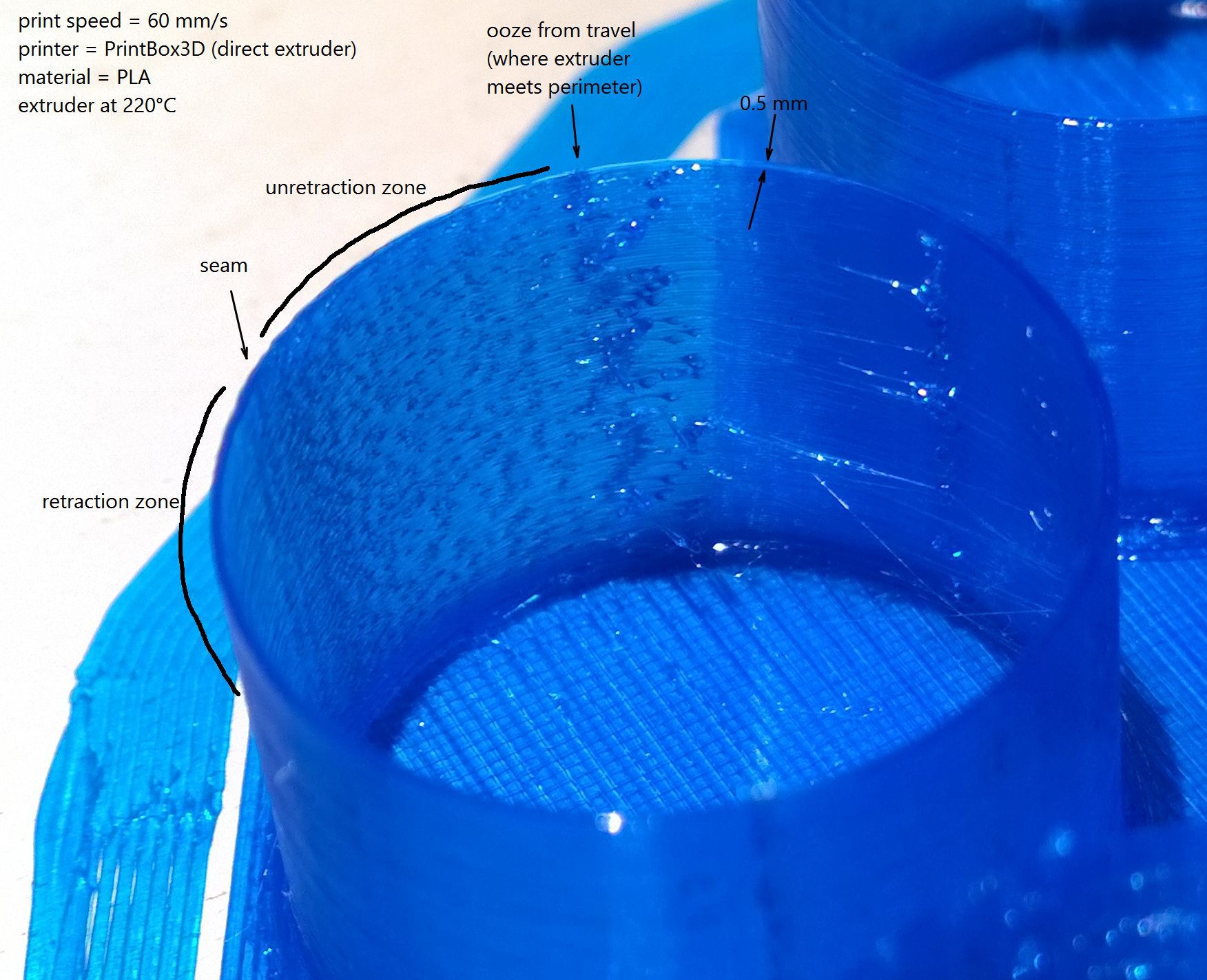 This is the video of the first more-or-less successful print.

Is it worth it?

That's a tough question, actually. First of all. take a look at the test results (here, and here, in project logs).

* smooth travel reduces noise when printing. substantially. (at least on my PrintBox3D)

* blows up G-code size insanely (typical figure is three times, on objects with mostly straight lines this can be much worse a factor)

* increases printing time (while in theory, it should be capable of reducing it)

* It is tricky to get it right. Too fine a tessellation = comm choke. Too rough - and the printer will stop at every joint, then the travel takes forever. This is the main reason, why SplineTravel can't improve printing time.

* in some cases (when there is a cusp in bezier, mostly), my printer stops and thinks for a while. It might be caused by cordinates precision limits. So far, I have no idea how to fight this problem.

* on my printer, combining SplineTravel and Z-hopping proved impossible (due to firmware not being capable of processing XYZ curve, I think). Without Z-hopping, there is ooze all over the place.

* SplineTravel is not very compatible with Repetier-Host's Feedrate slider that adjusts the speed in real time. Well, it works, but running at anything other than 100% causes speed mismatches. Retraction/unretraction blended into curved travel is also confusing Repetier-host, causing it to report wrong filament consumption, not counting layers properly, and visualization issues, and in some cases repetier-host even fails to estimate printing time!

So, SplineTravel was a fun hack, but I don't think I'm going to use it a lot.

All that doesn't apply to seam concealment technique, which seems to be fantastic. More to come on this =)

The exit and enter velocity you use are skewed.
Because extrusion is stopping / starting the movement of the head is actually limited by the jerk and acceleration on the E axis. Perhaps that is why the time estimates don't come out as being faster than normal.

Love the idea. I am currently working on a GCODE interpreter for a special printer and having a curved movement is super helpful for a 'dragged' effector as well as avoiding acceleration and deceleration of a swinging effector. I've just gotta have a go at replacing all non-printing moves with curves, even if I only use an arc. Thank you for the inspiration. (If you want to see my printer project, go to https://hackaday.io/project/13420-rigtigs-big-3d-printer.)

This is quite the amazing bit of experimental slicing! its a shame that the people who write the slicers have yet to innovate on this level. as soon as I get my production delta completed, I will be testing this extensively, and having a smoothie board, I feel as if it may be able to handle this.... Thank you for this wonderful tool!

Please let me know if you can get Z-hopping work. It is one thing I couldn't get out of my printer.

Good news is that my printer turned out to be compatible with standard firmwares, so I'm considering wacking an arduino due and trying embedding splinetravel into the firmware, where it should be able to work much better.

Josha Foust wrote 08/23/2015 at 16:08 • point
Maybe this would work better in firmware. Like on something with a more powerful processor like the Smoothieboard.

Totally agree that it is worth doing in firmware. The problem is, writing firmware is quite a bit harder, especially considering that my 3d printer is not open source (there are heavily custom stepper drivers, which are crazy good IMO)

The video looks awesome.  Quite a stark contrast from the usual jerking motions I'm used to watching.