From the first brain storming session a computer aided designed (CAD) model was drafted using Solidworks™. Being socially aware a design effort was made to minimise packaging where possible and as such led to the redesign the support structure and base, so that the upper support structure could be stowed in the base when not in use reducing the amount of packaging from production to deployment. Swing Arm actuation was also discussed at this phase and the choice to use a low cost 9g servo motor was made. Drawing inspiration from the hobby RC world a OEM hobby linkage rod was not only a functional choice but a cost effect alternative to designing this part from scratch.

A number of geometric iterations were made that focused on ergonomics and functionality eventually resulting in the next major design pictured below. 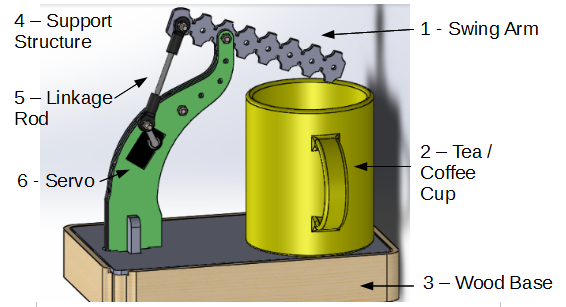