With the mechanics now sorted it was time to consider the electronics, but before laying out a schematic a flow chart of operation had to developed.

The initial flow and sequence of events are as follows:

The flow chart helped identified the requirements for the electronics, added features where deemed necessary to meet the needs of the end users, eg vision impaired users require tactile buttons and audible tones, hearing impaired users would require visual cues and of course all users could benefit from all these additional features. Adding features increase the overall cost, and keeping cost down was important. Trade-offs between features and costs were made with the addition of 4 surface mounted lights (LEDS) for visual feedback, tactile push buttons selected and a piezo buzzer added for visually impaired users (Below).

The Brains of the operations is and Arduino Nano PCB, Atmel 328p; the nice thing about these low cost circuit boards is that they already have suitable features reducing the overall bill of materials (BOM) such as voltage regulator, usb connector for debugging. And also facilities STEM because the student change the parameters of code in the ARDUINO IDE / or using a text editor and GCC. 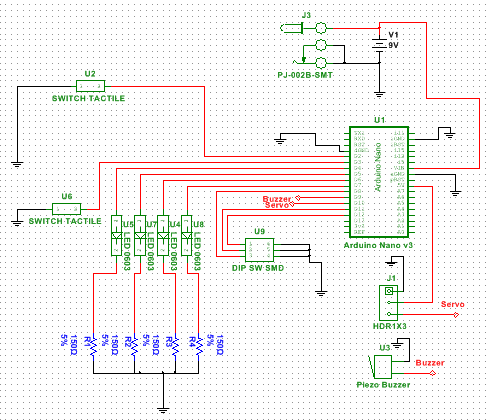 National Instruments Multisim™ was used for the schematic capture, which then was transferred to Ultiboard™ for layout. Circuit Board Layout involves mechanically places the individual parts such as push buttons, lights and other components drawing tracks that link all the parts electrically together pictured below.