This is a short log[*] describing the 16-bit expansion card interface in the 68000 system. I've deliberately kept the design of this interface as simple as possible, in order to make it easy and quick to build expansion cards. I know I could have implemented a standard interface, like VME, S100, or (shudder) ISA, but I didn't. I felt like I'd learn more by implementing my own interface, mainly so that I could discover all of its shortcomings!

The motherboard has four expansion sockets, all with an identical pinout. Here's the setup: 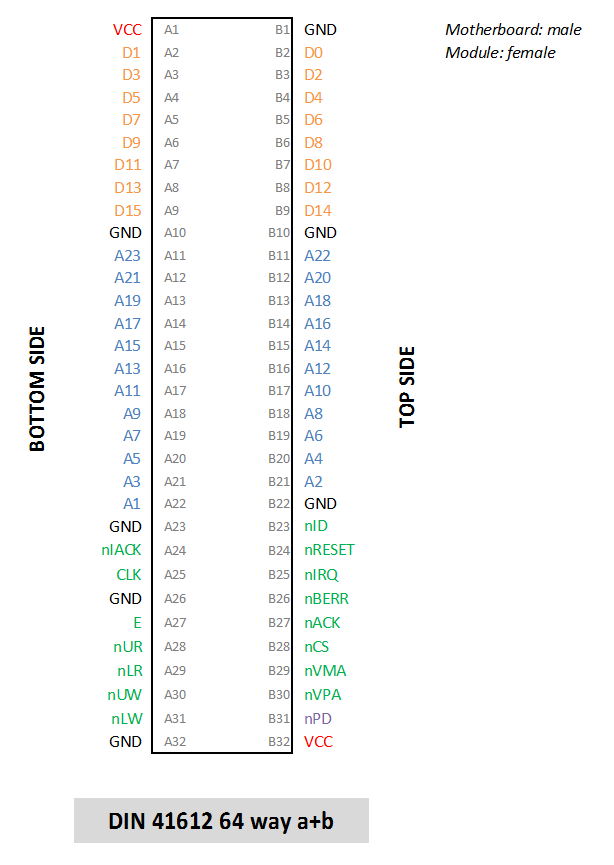 Each slot is mapped to a fixed 1MB region of the MC68000 address space. The expansion interface exposes all 23 of the MC68000's address lines. This might seem pointless, given that only the lower 19 lines are needed to address a 1MB space; however, exposing the entire address creates the possibility of plugging a bus analyser into a slot in order to help with debugging.

The nPD (presence detect) lines on each of the four expansion slots are connected to general-purpose inputs on an MC68681 DUART. At boot, the operating system code uses the status of these pins to determine whether any peripheral cards are attached. If a card is found, the OS runs an "identify" cycle to work out what's plugged in. To do this, the host asserts the nID line and runs an eight-bit read cycle on each occupied expansion slot. The peripheral must respond by placing an ID number on the upper eight bits of the data bus and terminating the cycle with nACK. This enables the OS to initialise a driver for the attached peripheral.

Here's a screenshot of the output generated by the system during the boot process, showing the OS identifying some peripheral cards (lines highlighted in red). Having found two Ethernet cards, the OS subsequently initialises its network stack (lines highlighted in green). The output in the screenshot probably looks somewhat Linux-ey, but it's not Linux - all of this code is home-grown. 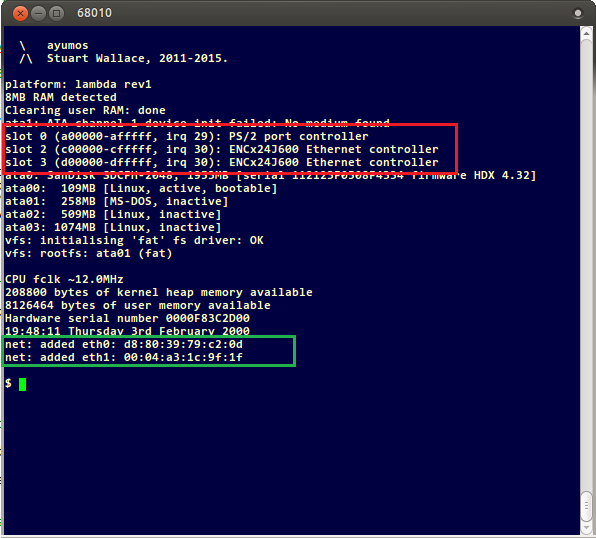 (For those who care, I got tired of referring to the OS as the "As Yet Unnamed Mc68k Operating System", and started calling it "ayumos" instead)

Overall this expansion interface suits my requirements fairly well. It's not particularly generic - I can't imagine it ever being used in any other system - but it works. There are several shortcomings, including: