Now it was time to tackle some of the software (talking about codes running on the computer not the firmware) side of things. The very first thing we did was to load our under-powered PC (it is a 32 bit system by the way) with the latest version of Ubuntu (14.04.3 LTS).

With it 'sudo apt-get updated, upgraded, and then dist-upgraded'. We are finally ready to install the 'Robot Operating System (ROS)'. For those who are not familiar with ROS, wikipedia calls it:

Meanwhile we call it a kick ass software that ties the various components of a robot together. It has a large open-source community supported library to boot. Anyone who is really serious about robotics should take a look at it. This is also the first time getting our feet wet in the 'ROS lake'.

For our system we installed the most current version 'ROS Jade Turtle' (detailed instruction here) IN FULL (don't to leave out any important packages). The ROS website provides a series of excellent tutorials that really helped us... in the beginning (more on this later). In a nutshell, what we want to in ROS is to implement something called Hector SLAM (no it is not a WWE thing). Firstly SLAM is a abbreviation of Simultaneous Localization and Mapping. It refers to the process in which a robot (it can be any number of similar things) can in parallel map out an unknown area and at the same time determine its location in the map. This is helpful in getting a robot autonomously from point A to B.

Now Hector SLAM is something more advanced. It can build up a map without need for odometry. Let us explain: Imagine the lidar sensor we featured earlier. It outputs a distance versus polar angle kind of reading. When the sensor moves, the readings change, kind of like a scene A to B. Now the Hector SLAM algorithm is able to the components of A in B. Thus it does'nt require odometry input as a reference., although it can be augmented by it.

Now ROS rears its baffling head. It is well known to have a steep learning curve (maybe that is only for us). While there are a multitude of examples of sucessful implementation of RPLIDAR with Hector SLAM, there is not step by step instruction how to do it. After much toil we got it to work and we will document the steps here. Hope it is helpful:

First, one needs to get RPLIDAR to talk to ROS (we are making a major assumption that you are using Ubuntu), the steps for this procedure are:

2. Clone the folder listed on the site into your catkin's workspace src folder (assuming you are using Jade Turtle here)

4. Source the setup.bash file (we found that we need to do this for every command prompt that we open to run ROS stuff): source /opt/ros/jade/setup.bash

6. After that is done connect the RPLIDAR and run your new spanning rplidar ros node (that is what it is called): roslaunch rplidar_ros view_rplidar.launch

The last step open up what is call RVIZ which a ROS visualization program. What you should see is something like this: 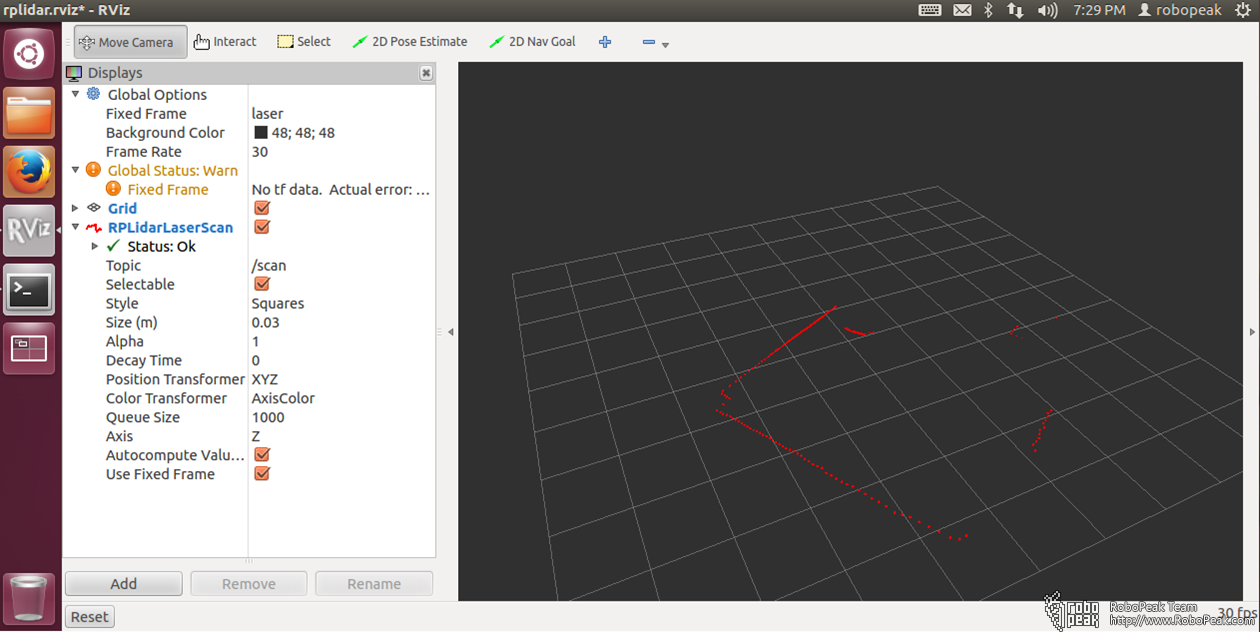 Now what you would immediately notice on the left is a warning about 'No tf data'. To put it simply it is trying to say that it is lacking in some defined reference frame. This will be a problem later on when trying to run Hector ROS.

Alternatively you can quit RVIZ and run the following two commands in separate command prompt (remember to source your setup.bash in both command prompt):

to see the data stream.

Now the next step is to implement the Hector SLAM node itself. Here are the step:

4. To start mapping do the following:

5. Now just move the lidar around... slowly... it should build up a map of the surrounding.

If you were to start the mapping without making the modification in step 3, no map would be generated.

Here was our test set-up for the first mapping, the lidar was connected to a laptop and the platform moved around on a trolley. The problem here is that the lidar is picking up the trolley push bar. Since that is fixed structure as the platform was moved around, the algorithm got confused and did not manage to build up a map. Maybe there is a way of excluding certain data points from the mapping. 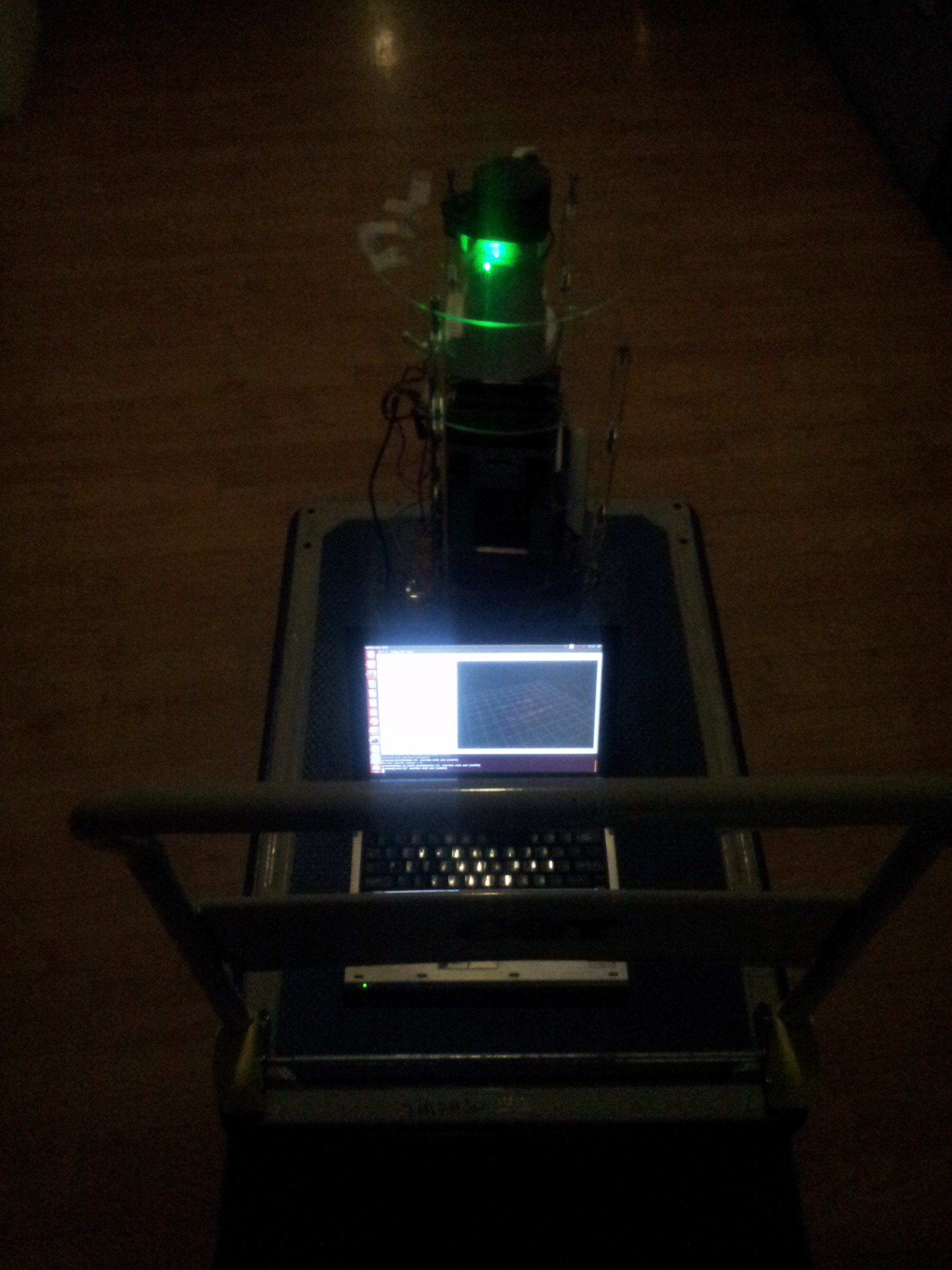 We then connected the lidar directly to the platform onboard pc and started the mapping via ssh over wifi. This ensure no part of the lidar was blocked. We drove the platform slowly up and down the corridor outside of our office and obtain this:

The corridor was in fact straight. The fact that it appears curved here was possibly due to the fact that the wall on that side was exceptionally featureless. So the Hector SLAM algorithm may not be matching up the features accurately. Maybe implementation of the odometry input would help in this case.

Modification to a Holomonic Base

I have a problem when running the catkin_make hector_slam, there is always an error said

Thank you very much for this information.

When you ssh into the onboard computer of the robot, do you have to do this from an ubuntu platform? And will this also open an rviz window? Or how do you manage to do that?

I have another question regarding the autonous navigation.

Do you have an idea on how I could implement or use the data that is generated to make my robot navigate autonomous through a building?

MAAAAAAAAAAAAAAAAAAAAAAAAAAN!! GENIUSS!!! A lot of time trying to do that and finally worked!!! Using Indigo and doing the modifications you said on comments maked everything going fine!! Thannnnnxxxxxxxx !!!!!!!!!

Had issues getting it running using ros-lunar on ubuntu16.10 (yakkety)
So finally figured out the following working steps,

Awesome write up and got me going. Thanks!

Hi! I have been the problem with generate map, I changed the step 3 no map would be generated.
Can you help?

Hi, i'm trying to follow your example (it almost works). It seems i'm encountering a little issue. No map is built in rviz. i have this info: lookupTransform base_footprint to laser timed out. Could not transform laser scan into base_frame. on the terminal. Do ou have an idea on how to repair? Thanks.