Preterm infants come in lots of different sizes. Nasal CPAP cannula come in few sizes. Read on to see if we can 3D print a solution.

So to give a quick idea of the need for this device I grabbed some statistics from the latest ANZNN (Australian and New Zealand Neonatal Network) annual report (2013). I'm based in Australia so these are relevant numbers to this project - they will translate to most developed world situations - data in the developing world is harder to track but no less important.

In 2013 the population of Australia was 23.13 million (+4.4 million in New Zealand) . ANZNN tracks all babies registered to level II and III units (level II is Special Care, level III is NICU). Most CPAP occurs in NICU so I will just focus here. In 2013 there were 9,721 babies registered to NICU in Australian and NZ. This is about 2-3% of all live births. Only 5% of these babies did not receive CPAP during their NICU stay. So in 2013, 7,815 preterm infants received greater than 4hr of CPAP in NICU across all 28 NICU's in Australia and New Zealand.

I work at King Edward Memorial Hospital in Western Australia - we are the only tertiary care maternity hospital in the State and that makes us pretty big. In 2013 we had 117 SCN beds in our unit, 55 of those NICU beds. Of the 9,721 admissions to NICU across 28 units, about 1,150 were admitted to our NICU. We are probably one of the biggest NICU's internationally.

Thankfully significant injury from CPAP does not occur that often, but these are reported as 'pressure injuries' for our hospitals accredition purposes. We would see 8-10 pressure injury reports each year attributable to nasal CPAP. This would equate to as many as 85 babies each year in Australia. However, this is the tip of the iceberg. These are the most significant where tissue damage and injury is quite extensive and reported as a clinical incident (could result in permanent disfigurement). The clinicians I work with report that the occurrence of 'redness' and 'soreness', through to minor injury requiring some intervention is more common particularly in patients receiving CPAP for longer durations. In 2013, of the infants receiving CPAP the median duration of therapy was 40 hours (range 14-128). Remembering that these kids are born extremely preterm (down to 23 weeks gestation) their skin is extremely fragile and susceptable to damage.

Since taking on this project, many parents of NICU 'graduates' have expressed their desire for a better solution as they have first hand experience with the discomfort and damage these devices can cause.

The image below (used with permission) gives some idea of how the current device is fixed to the patient. 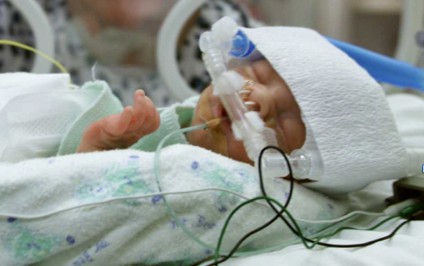