This experiment investigates the production of bio-oil from Coffee waste. Bio-Oil can be used to make biodiesel.

In this project, I am trying to find out if coffee is a viable source of biodiesel and how the particle size of the coffee grounds affects the amount of oil extracted. I tested both used and new coffee grounds. The used coffee grounds are the ones that are the most likely to be used in a real world application, as we are not going to farm coffee just for making biodiesel. Based on the usage of coffee and the population of U.S.A, about 127.2 Million Kilograms or 33.1 million gallons of bio- oil can be produced by the U.S. annually (using a yield of 10% which we will see is a very possible yield). This can be used to power city buses and diesel cars, resulting in reduced pollution as Biodiesel is a cleaner fuel, releasing 75-90% less carbon than gasoline.
To extract the oil from the coffee I am using hexane, which bonds with the oil and extracts it from the coffee grounds. 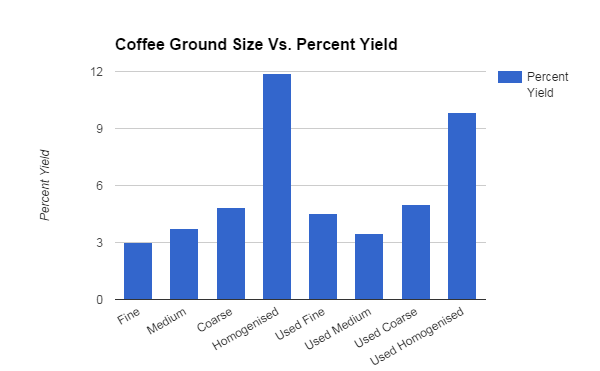 My results were expressed in terms of the percentage yield of oil.

The reason that I expressed the data in percentage of mass that is oil is because the mass of each sample is slightly different from each other and this method lets me compare the ratio of each bean’s oil content rather than just the mass value. The yield of oil from substances are also commonly expressed as percents in the field of bio-diesel.

The hypothesis was partially supported, the smallest particle sizes, which occurred with the homogenization, were the ones that yielded the most oil. However, for the coffee grounds which had not been homogenized, the coarse grounds had the highest yield.

I would like to thank Ms. Katherine Seguino, the instructional coordinator for the science department at Naperville Central High School, for supervising and helping me in the school lab.

I would also like to thank Professor Teymour of the Illinois Institute of Technology for helping me with the procedure, in the lab, and for providing and helping with the homogeniser.

Finally, I would like to thank my parents for helpful discussions and brewing coffee.

Nice Project. I was wondering if the Hexane can be captured and reused, since it is nasty stuff and Petrol based i think.

I just let the hexane evaporate off, it would probably be possible to capture the gas and condense it by cooling the gas.