M42, the answer to life, the universe and everything regarding photography. Information, modern day uses and hack with M42 lenses

It has been a long time since I had a chance to do another log entry. Sorry for that, but here it finally is!

The lens I will look at today is the Tair 3S. A 3 element 300mm prime from the USSR/Russia. This behemoth of a lens with its 72mm frontal ring mount is quite a good performer. It is quite sharp considering it's simple formula, has good color rendering and has amazing bokeh due to the 16 blade aperture. There have been various versions of this lens from 1955 all the way up to 2005, but the soviet era versions are the most sought after. 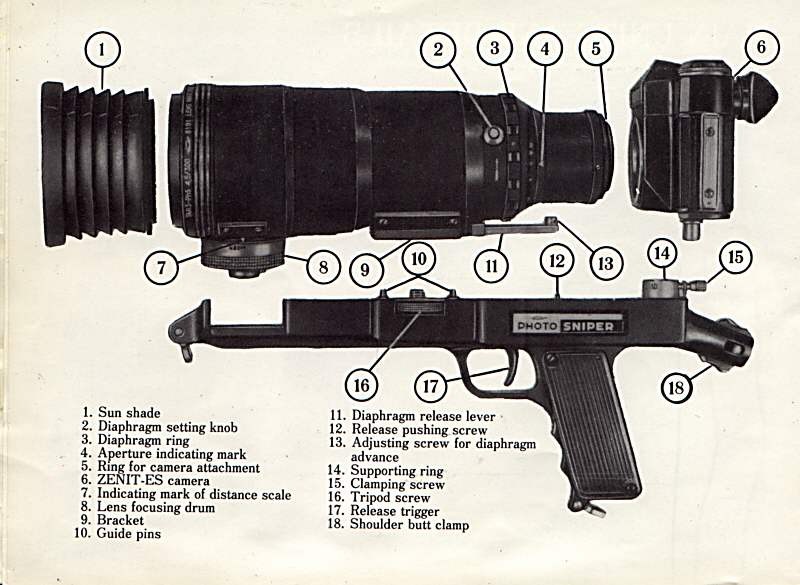 The lens is build like a tank(muzzle). It is russian over-engineering at it's zenith(there a pun in that). It is big, bulky and heavy at a whopping 1.54 kilograms without anything attached to it. This is the main reason why this lens is most commonly found as part of a kit.

The fotosniper kits included the Tair 3S in a leather or metal case matched up with a modified Zenit SRL body, some B&W filters, A helios 58mm lens and a gunstock and shoulder rest! The unwieldy Tair at 300mm is much to heavy to operate traditionally without a tripod, so in order to make shooting with it possible, the soviets simply put a gunstock underneath it with a trigger that operated the semi-automatic aperture* and the zenith camera.

*Semi-automatic aperture : The aperture needs to be reset by hand. You set the spring and halfway the trigger closes the aperture to the desired stop with a loud clang.

It is a unique lens and quite a solid performer for such a simple lens formula, so it is well worth having it as a 300mm reasonable light sensitive lens for a modern camera. Yes, like all other M42 lenses, you can get an adapter an screw this puppy on your DSLR or Mirrorless system and this looks absolutely amazing.

So here is where the hacking comes into play. Surely when you go out and shoot this lens you want it to function as it was intended. This means you want the tiger to work in a way that makes sense for your DSLR. So it should be able to activate the aperture, measure the light and give focus confirm and when pressed down, the trigger should have the camera take a shot.

There are several hacks to be found on the internet that rig this lens to digital cameras, but I did a conversion several years ago that just is a bit more refined. It it suitable for many camera systems, it is reversible if you want to use the old Zenit camera on it again and it is really simple.

The conversion is based on the HAMA remote shutter control units which are almost the same form factor for various systems or at least easily adaptable if it does not fit your camera. 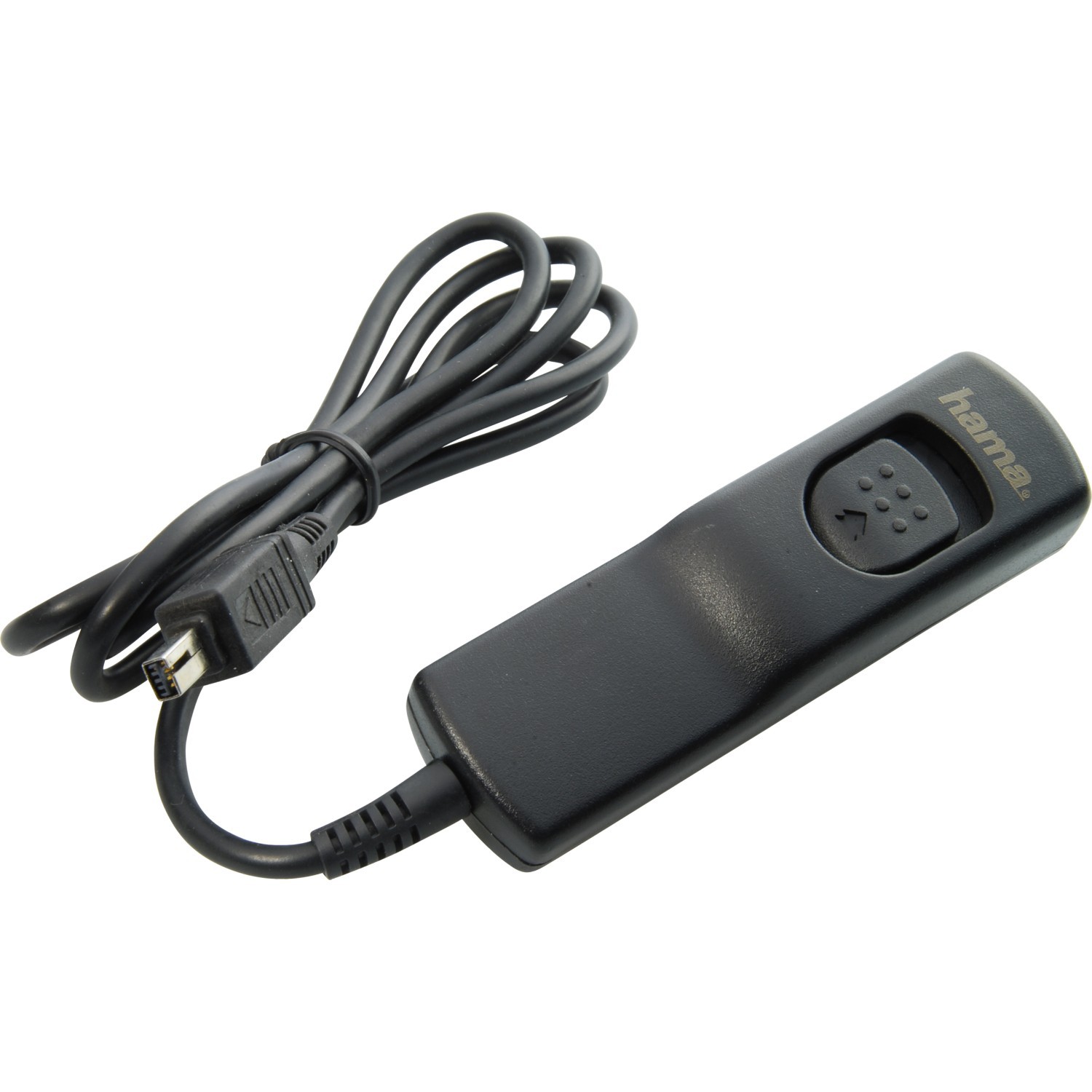 Step one is to gut the remote. The PCB needs to be slimmed down to fit and the pins need to be angled backwards. the pressure fit can't work id the second trigger port is there, so cut it off or desolder the part. The connector probably will be in the way of the sleeve is on and you need to take the grommet off.. You can solder the wires directly or use the bare connectors independently to work them around the mechanism later. This is just about all you need to do to the remote. 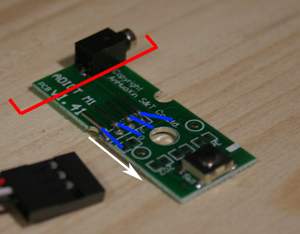 Step two. Preparing the gun-stock. There are a few mods you need to do on the gun-stock. A route for the wire to go through and come out and the trigger pin need replacing. After you have disassembled the gun-stock, you can remove the trigger pin by first loosing the worm-screw. I believe it is a standard M4 metric size. Replace this with a shorter screw with a flat head. The routing of the wire is a matter of preference. I used the empty grip to store the excess cable by drilling a hole through it. Because my remote port on the camera is on the left side, I opted for the cable to escape via the top side of the grip, but anywhere that you can route the cable to is fine. Maybe you need to remote the trigger-pin guide at the back depending on DSLR body size, just test fit the lens and find out. 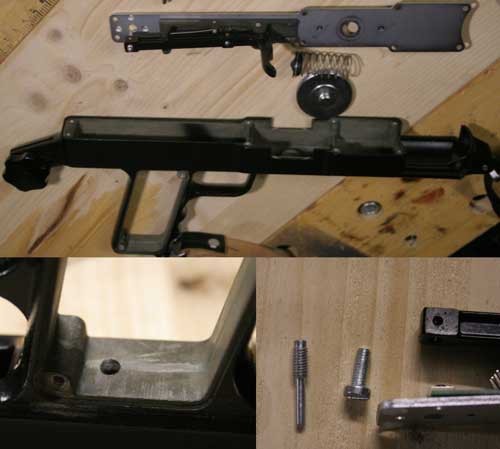 Step three is putting it together. You need some sleeve or isolator on the PCB so that it can't short on the metal housing of the gun stock. I cut one out of the plastic packaging the remote came in. Loosen the mechanism from the top plate and slide the PCB and sleeve assembly between the two parts. Make sure that the nut and the micro-switch are aligned and then tighten the trigger mechanism and top plate. Now you can calibrate the throw of the tiger. Adjust the screw where you can feel both focus and the shutter click in the button, then tighten the worm-screw. 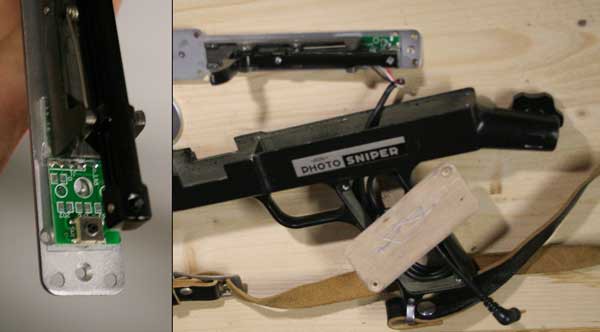 Setting the aperture trigger is a bit finicky. You can set the hight with a set screw on the lens. I prefer to have the aperture close between focus and shoot, making the trigger a 3 stage button. 1. auto focus 2. set aperture and 3. shoot. 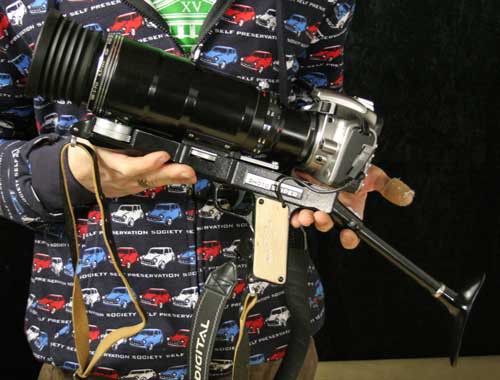 Connect and route the wires and put it back together. get your M42 adapter ring and mount your DSRL. Plug in the trigger in and head off to your favorite air-show or political rally… or perhaps don't!. 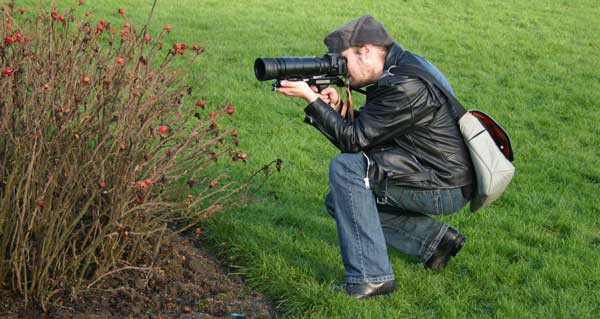 Apart from the novelty value, this is a pretty good preforming lens for what it is and it is fun as well. The hack itself is doable for anybody and the reversibility of the modifications should lay down to rest any concerns about destroying 60/70/80 soviet industrial heritage.

Depending where you are in the world the number, versions and price will vary. It can be had for 100 euros, but even 200$ for a complete kit also isn't a bad deal if you can get that to the US. Many eastern European sellers are asking prices that are much to high for visually banged up units.

Make sure the kit is complete, the lens is clean with an operational aperture and you'll be good to go.