Well, this one was easy. I implemented the overtemperature detection described in the previous log, fired up the heaters at 100% and got this (no galden in the oven): As a consequence to the smoke I lowered the overtemperature thresholds to 245 °C (off) and 240 °C (on). Going lower than that is probably not feasible because the galden evaporates at 230 °C and some margin is needed to actually get heat into the boiling galden.

I don't know where the kink in the T_I (chamber thermocouple) comes from.

With Galden filled in

First of all, yes it does! 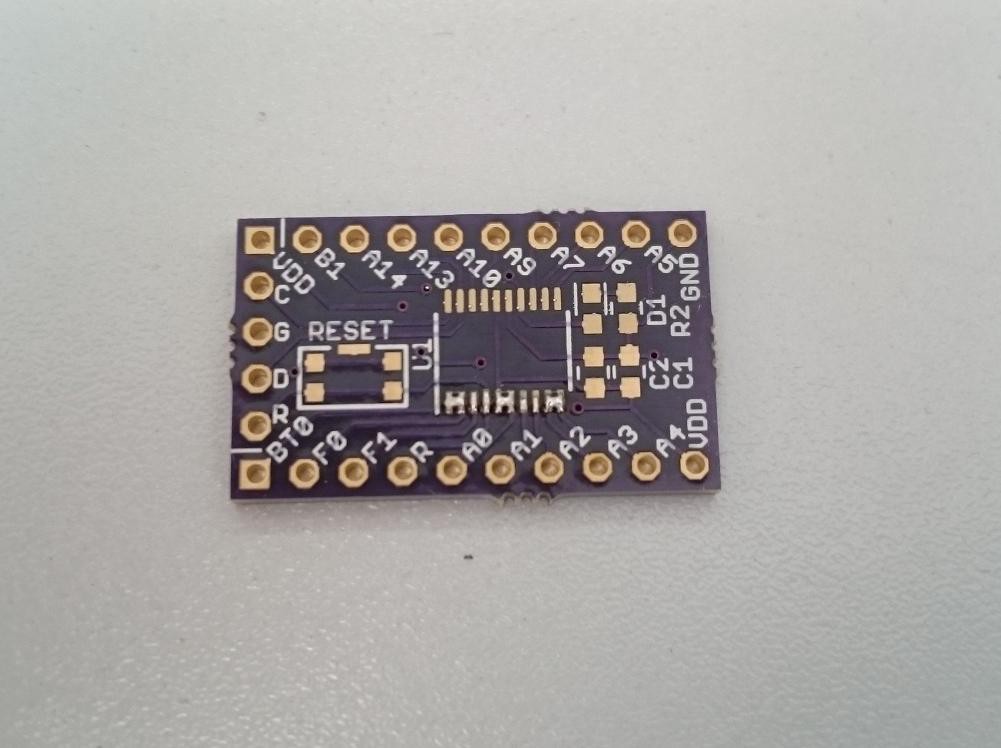 But getting there was at least partway dangerous because I turned vapsy into a galden geyser for a moment. Here's what I did:

30 mL of galden were poured into the oven. The resulting liquid level is well below the PCB grate (?) and the chiller exit fitting, and some galden is in the tube between chamber and chiller. Here's a top view

of the PCB in the chamber: 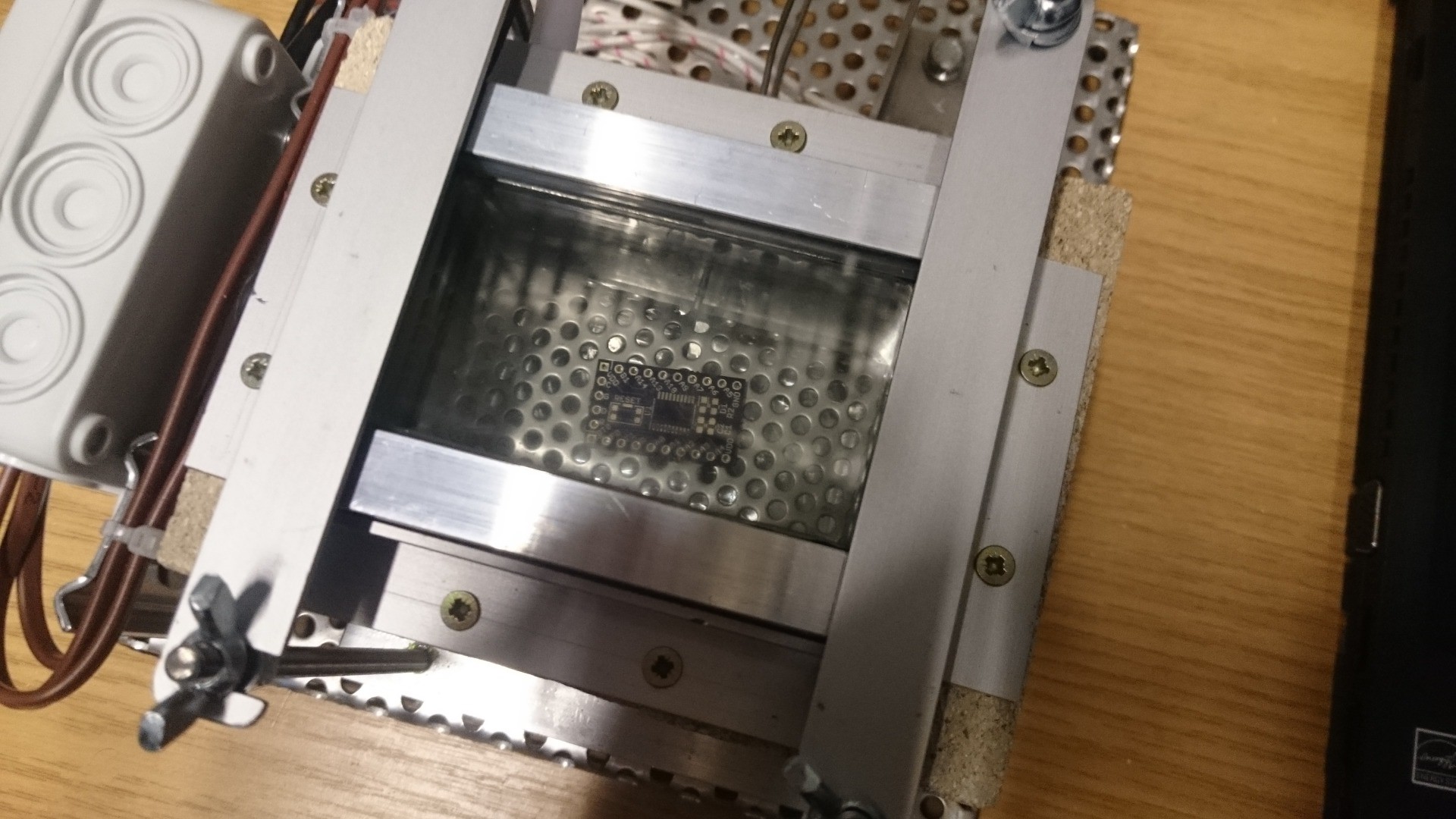 and after a while small drops of galden condensed at the lid's inner glass plate: 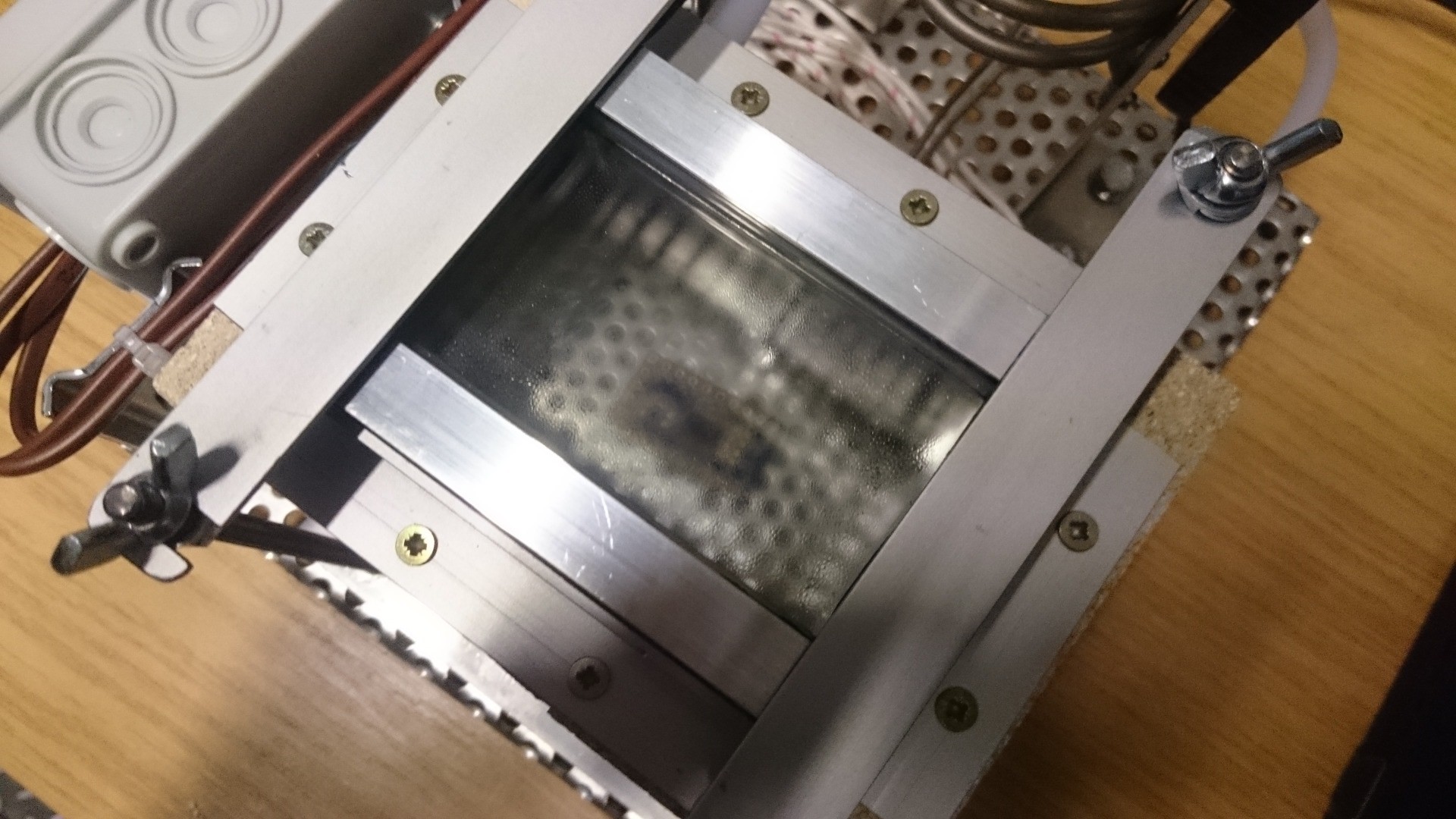 These drops grew with increasing steam quality in the chamber. When the chamber was filled with saturated steam, steam also exited through the chiller. This is when things got dangerous, because the power was still set to 100 %.

What happened? My guess is that galden bubbles entered the chiller from below, pushing liquid galden out of the tube. This was most probably caused by the high heat flux, which was

Here is a plot extracted from the logs: 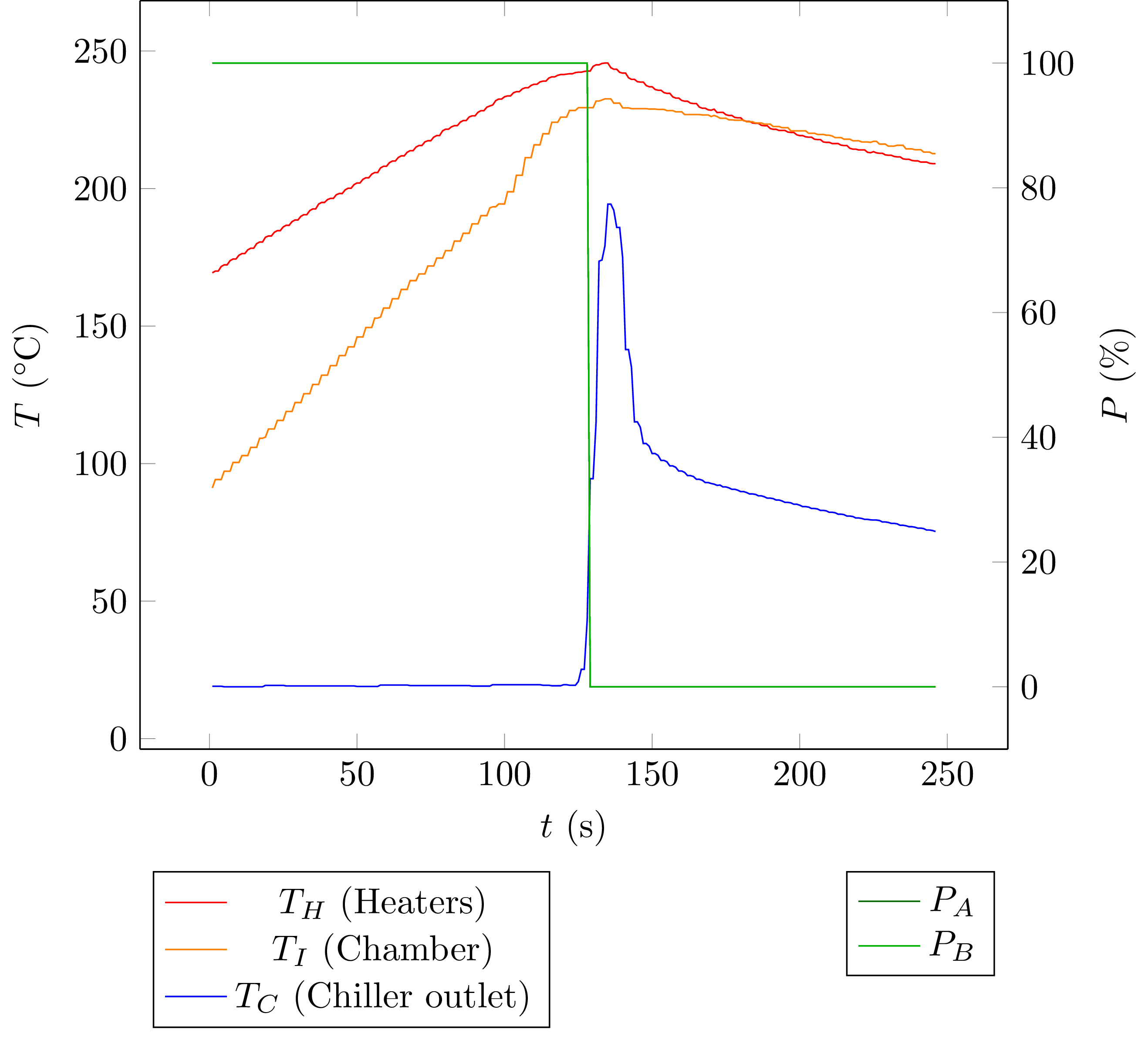 Let's start with the region t < 100 s: Both heaters and chamber heat up, the heaters are significantly warmer than the chamber. Nothing surprising here really.

t = 100 s: galden starts to evaporate. The boiling point is given at 230 °C, and looking at the raw data reveals that the heaters have roughly this temperature at that time. The evaporated galden brings a lot of heat into the chamber, which now heats up quicker than before (how cool is that!?) until it reaches 230 °C as well. Overtemperature protection doesn't kick in because the galden does a good job at cooling the heaters.

So up to t = 120 s or so nothing happens in the chiller, which quietly waits for something to be done, at about 20 °C. Now things get interesting and here's a zoomed in excerpt: As soon as the chamber is saturated with galden vapor (t = 125 s), the chiller outlet temperature increases because the chiller now has to cool down a certain amount of galden per time. The theoretical maximum with a vaporization heat of 63J/g would be

assuming that there are no heat losses to the ambient. That's quite a lot and this small chiller certainly can't handle it:

The chamber temperature remains constant at about 232 °C. This tells me that the thermocouples are exact enough for this job (I haven't calibrated them).

First of all, I won't switch this thing on again until I a have better control strategy. Full power is no strategy at all, so it can only improve! I'll need to think about ways to reliably keep the chiller within its limits. Another overtemperature detection for T_C would certainly work, but there are certainly "softer" ways of getting this right.

Alex Rich wrote 10/04/2015 at 03:12 • point
what about an overflow chamber for the galden that gets pushed out, cool it and let it condense back into the main setup.

My setup is just what you describe, but with a very small overflow chamber.

Alex Rich wrote 10/04/2015 at 03:10 • point
I hear you, the fact is, if you don't allow the chamber to increase in pressure using a seal on the lid and getting rid of the pressure compensation valve, any expanding vapor will have to go somewhere.It can't stay in, otherwise the pressure would increase.

So did you basically make a coffee maker pump that pumps Galden out of your pressure compensation opening?  http://www.engineerguy.com/videos/video-coffee-maker.htm

yes that's one way how things can go wrong. I'm sure I can circumvent that mode, though

yes, the lower one is submerged. I didn't think of the coffee maker when I decided to place it there...

Also submerging the lower tube was done on purpose, so that vapor can't enter it and escape through the pressure compensation pipe. At least that's what I wanted to happen/not happen.