Update (9-22-15): NOTE: it's *much easier,* probably, to use the circuitry as-is from an old (IBM-compatible) floppy-drive. Two pins on the drive's connector are for step and direction.

Though, there may be some resolution limitations (no microstepping). See this "Fail of the week" which actually isn't much of a fail at all: Fail of the Week: Laser cutter that makes jagged edges | Hackaday

Well, since I've burnt-out or otherwise damaged a few diodes in the last few days, I've noticed one thing in particular... It seems most DVD drives use stepper-motors rather than DC motors to position the head. Apparently my collection of scrapped drives shown in one of the earlier logs must come from CD drives.

Fine, steppers are certainly easier to work with. So easy, in fact, that I'm using nothing more than a motor-driver (Dual H-Bridge) chip and a quadrature-knob to move the motor in the following video (no processor!).

This stepper driver was found in old Macintosh floppy drives (and likely elsewhere). It's in a 16pin DIP, which is perfect for prototyping/breadboarding. It takes a quadrature input (like used in volume-knobs or the scroll-wheel in your mouse) to move a bipolar stepper motor (the kind that only have four wires, often found in floppy-drive and DVD-drive sleds).

Here I've wired the knob directly to the motor-driver, no processor required.

It also appears to come in other packages, including surface-mount. But I've probably a dozen old Mac floppy drives, and they all appear to use this chip in DIP form...

And, I know you're wondering... Why didn't I use the motor-drivers from the DVD drives, themselves...? Well, first, one drive's chip wasn't documented. The other two drives have (different) multi-purpose chips which look quite handy, but have *way* too many *tiny* pins to work with... One was 58 pins, if I recall correctly. It handled the "sled" motor, the spindle motor, the eject motor, and the focus/tracking coils. I need two for two axes, and since those chips were different, it would require that much more effort to work with them. Why not the L293? Well, I don't have any, A. And B, I don't have any money. And C, I don't have to wait for them. And D, now I know I have a dozen chips that do the job quite nicely and will be handy for other projects down the line. And E, of course I'm looking for some amount of justification in having kept around 12 Macintosh floppy drives for all these years. But they do have a wealth of cool things in 'em... The eject-motors are especially nice, highly geared-down, and modular. The "sled" motor unit is also quite nice, most are a contained unit with end-support bearings.

Next step, wire 'em up to the DVD sled motors... Why didn't I do that for the video? I'll do another and add it to this post.

Here's the DVD sled in motion...

There seems to be a commonality amongst steppers of this sort... The windings seem to be "stacked" one atop the other. 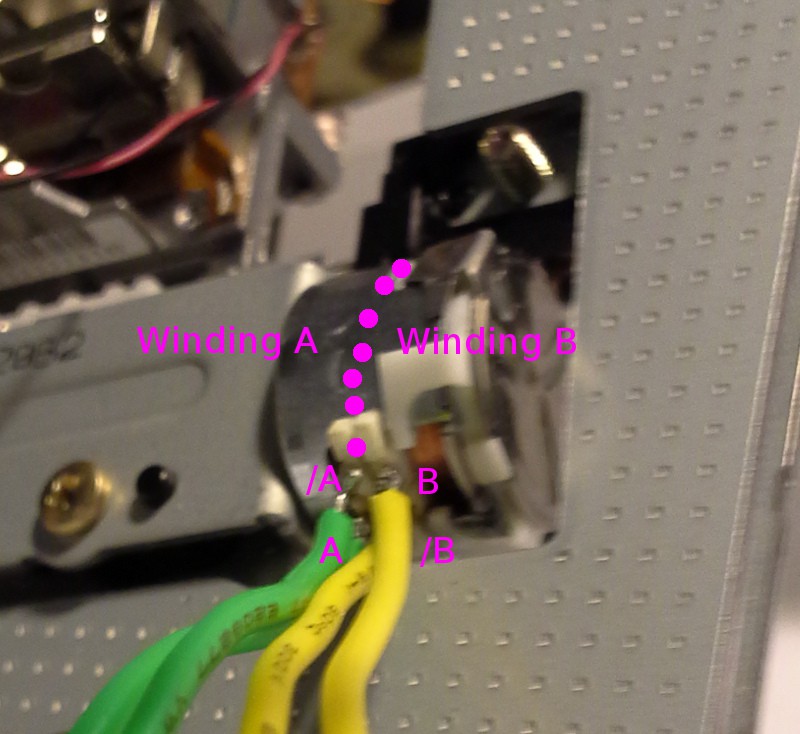 I'm not certain, but I believe if you swap /A and A, and/or /B and B it merely reverses the direction. This is how I have it wired-up to the driver's outputs. (Is it possible to accidentally wire it up such that you'd get one step in one direction then the next in the reverse...? To-Ponder... but I don't think so).

Also, don't use wire this large, especially solid, to connect directly to the motor's pins... Those pins are held-in the plastic, if you melt it with too hot a soldering-iron or too long keeping that heat there for such large wires, that post will lose its holding-strength, and you'll eventually rip out the tiny winding wire.

(If you read this before this update, there're a couple changes above, re: L293 vs. L293D... along with some additional rambling).

Further experimentation with the knob suggests that we'll be needing microstepping. I'll go into it more, later. But, the gist is that the motor is quite weak at "high" speeds, and definitely misses quite a few steps.

Again, without microstepping, it might be much easier to use an old IBM-compatible floppy-drive's circuitry. Seriously: Step and Direction.

ramblings on precision and non-steppers