@Stefan Lochbrunner and @esot.eric were thinking about using a dvd laser to ablate spraypaint for making PCBs as seen <here>. I had a laser working, but whether I tried paint, marker or tape, it just didn't work right when the stuff was stuck to copper.

Taking apart a few laser printers, I struck on the idea of using toner - it's a plastic powder that melts on, and is what people have used for making PCBs at home.

I tried dusting on the toner powder, but that failed epically. But I did eventually find a method that works!

1) Mix some toner in with some alcohol (water doesn't work due to surface tension and this dries faster anyway). It shouldn't be pasty, but you do want it quite thick.

2) Clean some copper clad board with steel wool or whatever, then pour on some of the toner mixture. Tilt the board to get full coverage, then shake off the excess. Watch someone doing tintype photography to see a professional at getting the constant thickness. As you're shaking it off, the stuff left on the board should already be drying. Give it an extra blow or two and you're ready to laser!

3) Use a DVD laser (mine is in an XY thingee outlined in other posts) to burn out the pattern of the traces. You may have to experiment with different burn speeds, focuses (its good when not quite focused) and coating thickness (varied by adding toner the the slop) to find what works.

4) Carefully use cotton wool or a soft brush to clear away the non-melted toner, leaving the melted toner where you want.

4b) Heat the remaining toner and the board above some sort of flame to fix it thoroughly in place.

5) Etch away the excess copper and you should (theoretically) have a board! Yaay :)

Here's a test trace (not etched yet). I could scratch it off easily, but careful handling should help (edit - problem solved by 4b). 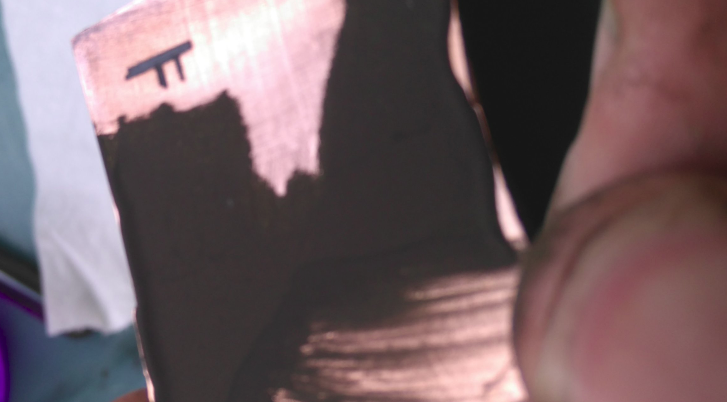 I'm leaving on holiday but just had to try properly. The video files are massive, and I don't have time to edit/upload yet. Here's a money shot of the results though: 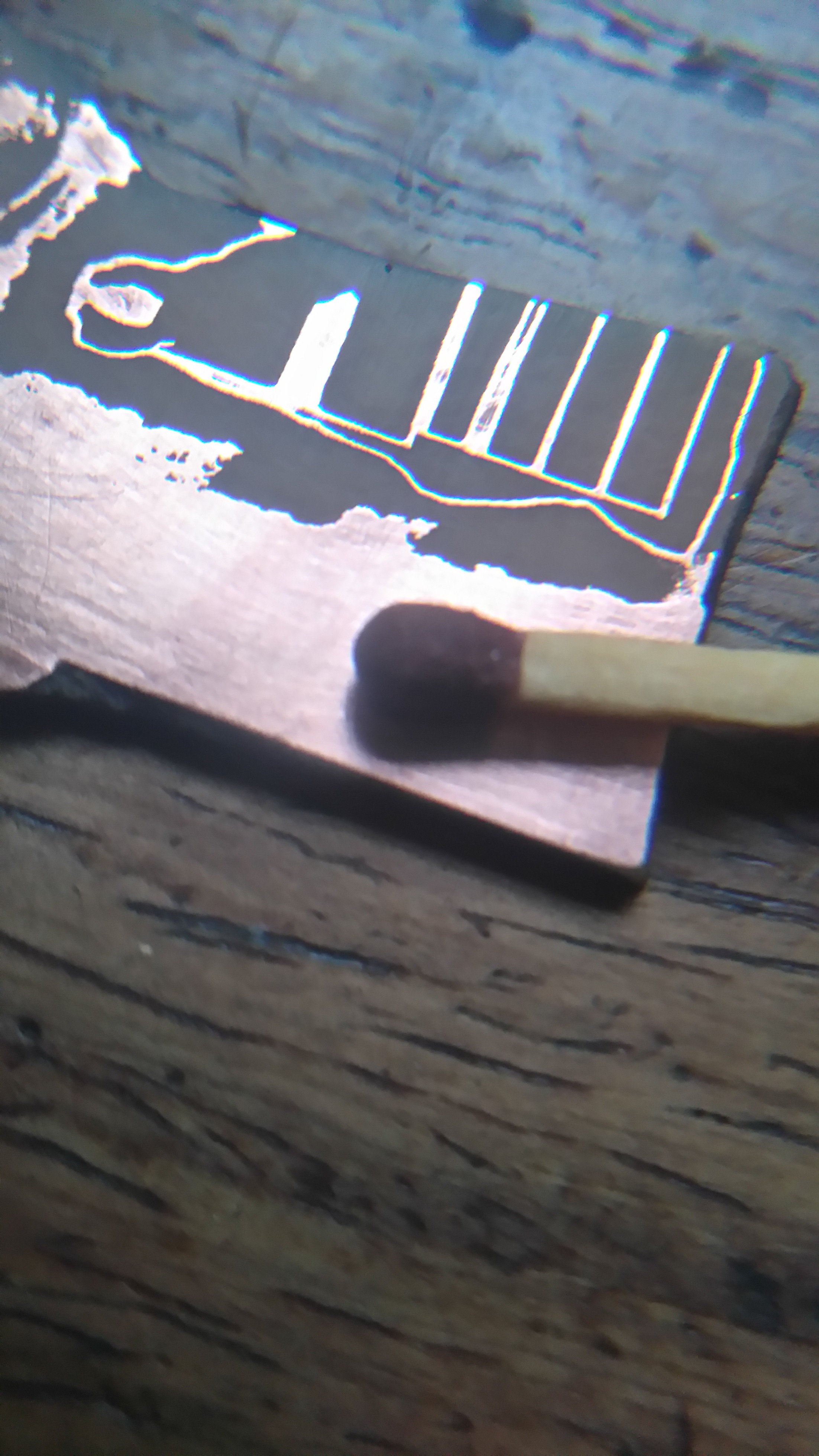 I added a step between 4 and 5 above, which makes handling the board without the traces lifting much easier. In fact, they survived harsh scrubbing without a single break. So this is good to know if it is going to be a silkscreen method.

I confess to speeding up the etching process with some VERY strong HCL, but don't even think of trying that without gloves+goggles+safety tie. Seriously, I happily splashed the H2O2 in my eye and bleached my fingers a little with it, and people normally freak out about the safety of that. So when I freak out about this acid, you know it's bad.

I am amazed at the tiny track width this thing manages. And the clearance between lines it can achieve! It looks like there are some broken patches in the photo, but these are left over toner.

Even though this was just a fake pcb sketched in inkscape in 5 mins, I am pleased with how this is looking and excited to try some actual boards in January, plus show the whole process in a video.

@johnowhitaker: It's pretty durn cool you threw this up here, but it's such a friggin' brilliant idea, why ain't it at your #Mini Laser Cutter?!

And, yahknow what else it could be used for, is adding "silkscreen" to various things, PCB or otherwise... Printing labels on metal instrument-panels... ...

@esot.eric, I've been meaning to port it over. Just got back from a week far from computery things so maybe soon I'll get around to it. I want to make a new version as its own project for the hackaday prize, but I need to source some drives to get some better pics and test the process more. Before I destroyed it I did test melting some coloured toner over a PCB as a silkscreen. Didn't manage to get the settings dialled in, but it looked like it could work. Wouldn't stand soldering or reflow temps though...As for labels, it is easy to scratch off with a fingernail, but adding a coat of clear lacquer for protection could work great!

Cool! Was wondering about colors. Good call with clear-coat. I'll definitely skull it when it's up!

I got the lasers out the other day, so my experiments are closer to happening than ever. But they're all too weak, so it looks like I'll have to take apart my "secret side project" to do this, though. But that's OK, 'cause this'll be much more useful. Besides, if I wanted to revisit the secret-side-project (burning images into floppy-disks) the system would be much easier to implement and work-with with the new lens arrangement (and could even be an add-on to the two-axis system).

Keeping my eyes open for that new project!

Still thinking this is friggin' brilliant... Just acquired a used toner cartridge to try out soon.

And in my feed today: #OpenExposer

I never could wrap my head around that UV-exposable PCB stuff... As far as I'm aware, you can't *see* it when it's exposed! How do you know when it's done exposing, nevermind etching, aligning the other layer, etc...?

Seems like these two systems could work together nicely with some work...

It's been ages since I took a look at #OpenExposer - I have the laser module from a laser printer that I have started reverse engineering - having it be one 'axis' could sure improve print times. One problem is getting a visible laser in there... need to scrounge some more DVD drives since I left my spare diodes in Zimbabwe :/

Regarding the UV PCB mask, everyone I have seen do it just times exposure and when they find a process that works they just stick to it religiously. I haven't looked into it myself since I have neither a functioning printer nor access to treated PCBs near me :P

I read that CD-RW lasers are pretty powerful as well, but focussing 'em might be a little difficult for the same reasons as UV exposed PCBs ;) Seems like it'd be lots of trial and error in the beginning of that process, and yah don't know the results 'till the material's used-up.

That's why I dig this process...