(Update 2: Another photo from mirrored-plastics-burning)

Alright, the last-log I led-up to this... second "duh-moment" which reduced weeks of over-engineering down to little more than gravity and binder-clips...

As described in the last log, I turned the upper-axis sled/laser mechanism on its side in order to do some experiments with lenses of different focal lengths (and discovered the focal-length of the lens--*under* the drive's adjustable-focussing lens--the one I originally presumed to be a collimating-lens--to be durn-near exactly the focal-length I was looking for (about 10inches). Cool!

Here's the new setup... it's *way* easier to adjust focus, square, parallel, and much more... And doesn't even require any screw-adjustments to do-so! 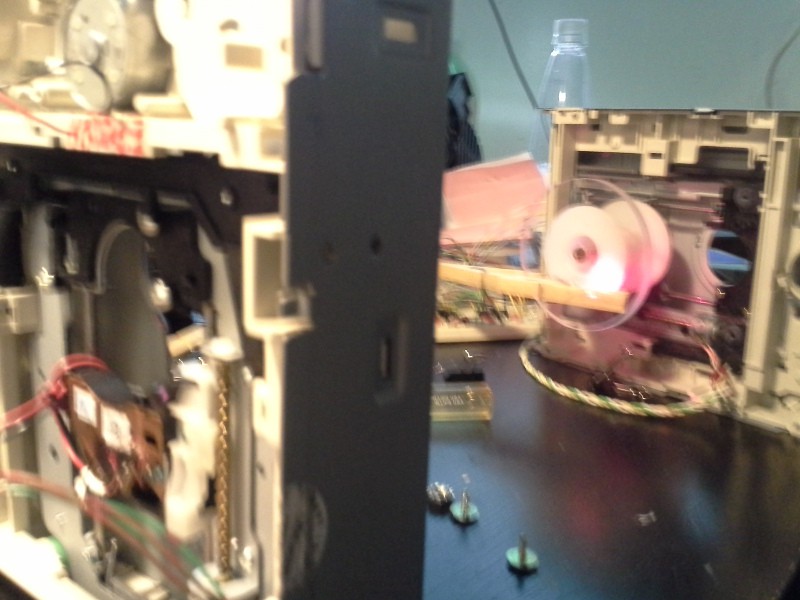 Gravity can be your friend...

The laser/sled axis is the one closest to us... It originally traveled with the laser facing down onto a horizontal surface. Now that surface is upright (why not? We've gotta clamp the material down somehow anyways...)

(Sorry for the blurry image, later images will be more clear, this just happens to be the only one with the laser lasering... And a fore-sorry for the sizes of the following images... I should probably write an imagemagick-script again soon... what's reasonable these days...? 1280x960?)

So, that's the "Big Duh" which reduced quite a bit of mechanical design and failure to... unnecessary.

Now for some results...

We all know "black [electrical] tape" is cuttable with a laser-diode... And there are a few other such materials which just make sense, such as (as I discovered a while back) floppy-disks (the magnetic/media part),

I didn't take a photo, from a while-back (Update added at the end), but another interesting result was cutting *through* potato/corn-chip bags... We're talking the heavy plastic that's *mirror-finished* on the inside. So, cut yourself some mirrors!

I'da sworn that mirror-stuff would've gone all the way through, so all I expected was to burn off the ink on the outside of the bag, leaving a mirror-finish behind the "cut." Instead, the ink apparently sucked up enough heat to even burn through the mirroring. COOL. (even weirder, it seemed to work perfectly fine with *red* bags, which I'd've expected to be *reflecting* the laser-diode's red color...)

Here are some more recent results, some quite surprising, as well...

(Note the diagonal line... that same pattern used in all the experiments)

This pretty much cut completely through the paper, except in a few places where it left some white fibers... Maybe the ink isn't consistent... and obviously the thickness isn't, as it can clearly be seen-through in several spots and not at all in others).

(Would it work with Construction-Paper?)

Etch Plastic... (This one's in the "expected" category, as I'm sure we've all seen people've etched their names on their cell-phones...) This happens to be a back-cover from an LCD monitor. Seems to work best on Matte-finished plastics, *really smooth-finished/shiny* plastics not-so-much. Though, it probably has to do with the actual type of plastic as well...

But this one was a shocker to me... 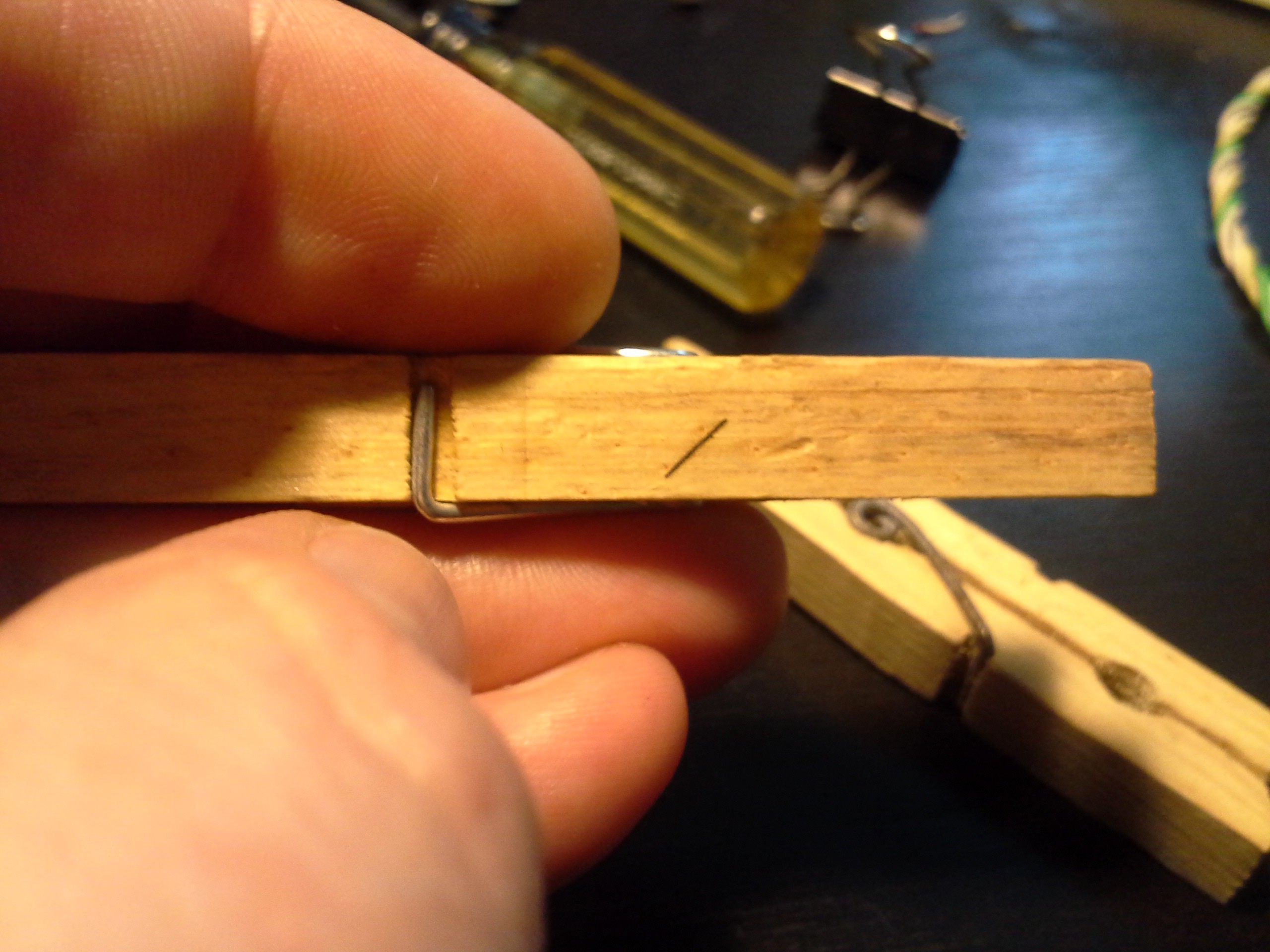 I figured it wouldn't work, because it doesn't do anything to light-colored paper... I even tried (pink) carbon-paper and (white) thermal-paper with zero-results. But here's a very-light-colored *wood* that burnt darn-near perfectly.

That led me to a strange conclusion... Maybe bleaching has something to do with why it doesn't do anything to paper...(?) So, I thought I'd try some unbleached paper... 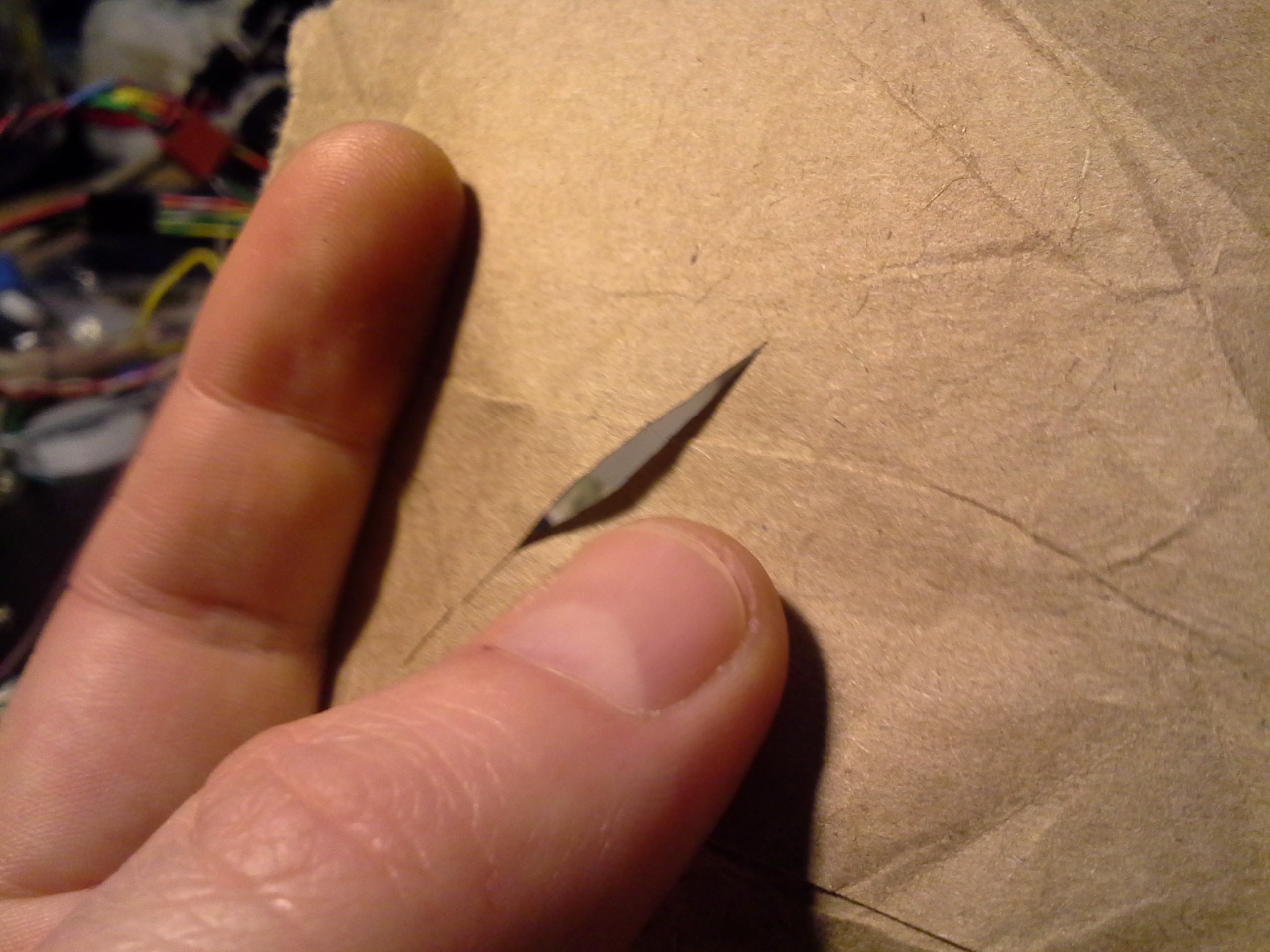 I thought it just burned like the wood, until I picked it up... nope, it cut right through.

So, I think maybe corrugated cardboard is the next experiment... I figure if it burns wood and cuts paper-bags, and cardboard is kinda like several layers of paper-bag material... we should get some burning... (Maybe even the unbleached card-stock-ish material used in e.g. cereal-boxes).

In which case, that'd be a pretty decent (and obviously cheap/easy) material to run experiments in calibrating software, etc... (Which would be quite handy for, e.g., fine-tuning/test-running the setup for double-sided printing on the #Mini PCB printer).

No idea what I was expecting, exactly, but I kinda visualized the possibility to etch labels into heatshrink before shrinking it... (Yahknow "GND" "5V"...) 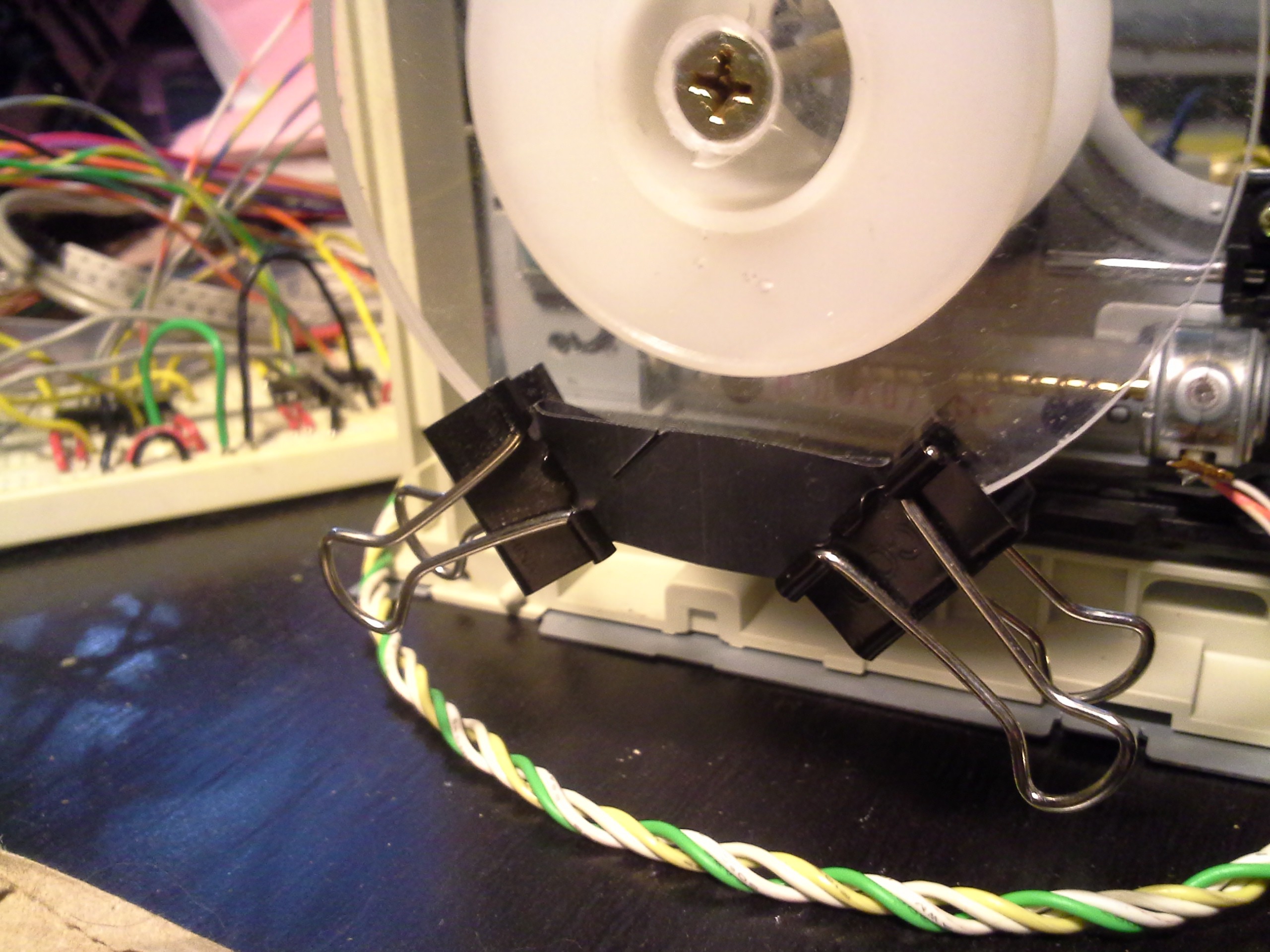 That one... would probably take some fine-tuning. This particular heatshrink is obviously quite large, and also thick, and it didn't burn-through, but it did definitely weaken it at the burn... Heat that up (for shrinkage) too much around the "label" and it'll likely just rip apart. But feasible...

I have no idea what the laser's actually doing to the tubing, though... Is it plausible the heat is just causing it to "shrink" locally, rather than actually *melting* it...? (It would seem shocking that the laser's heat-output would be higher than the tubing's ability to withstand my friggin' heat-gun which can melt solder...) And, I could be mistaken, but beside the "etch" it almost seems like the heat caused it to shrink just a little bit, forming a ridge... Interesting, but no idea what it'd be useful for.

These experiments were done with the laser-diode from a 20x DVD drive, as I recall... And, again as I recall, the maximum-output of my LM317-based current-source is 250mA.

And if you didn't pick up on the obvious bit that took quite some time for me to pick-up on, leave those sleds in the drives' housings; it sure makes for easy "assembly" using just gravity and a work-bench/table/floor.

And if you're as prone to over-engineering as I am, then here's another tidbit, from @johnowhitaker: It's easy to make fine-adjustments using little more than stacks of paper as shims... Books, post-its, who knows.... Still getting phone-books, dunno what to do with 'em? rip to the right thickness... Oh, and another one, also from johnowhitaker: Use binder-clips (or clothespins, since binder-clips were at the bottom of the same box) to secure your material... WAY easier than, say, designing (and cutting) a special bolt-pattern... (Something like that can always be added later *if necessary*).

Finally, look back at that last log, I was pretty excited about a few things there, but one of the "big ones" that I'll be adding to my tricks-of-the-trade is the ability to use wood-screws with those stamped-sheet-metal "nuts"... That's what's holding my work-surface to its sled, and works *way better* than I would've ever expected.

This is a different brand, but has that same mirrored-finish on the inside. As I recall from my previous experiment, it actually *cut* that bag, but this one just seems to have burnt away the "ink" including the mirror-finish, but the bag itself seems intact (and clear). Could be interesting... 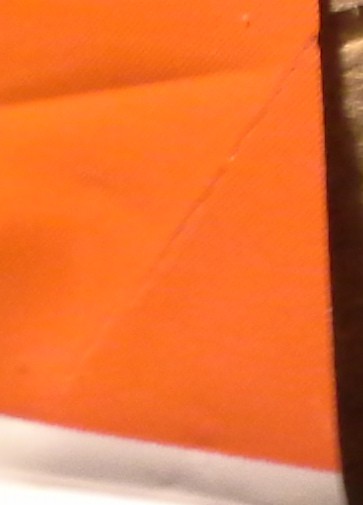 Very hard to see the path, above, but you can see how it burnt through the mirror-finish on the other side... 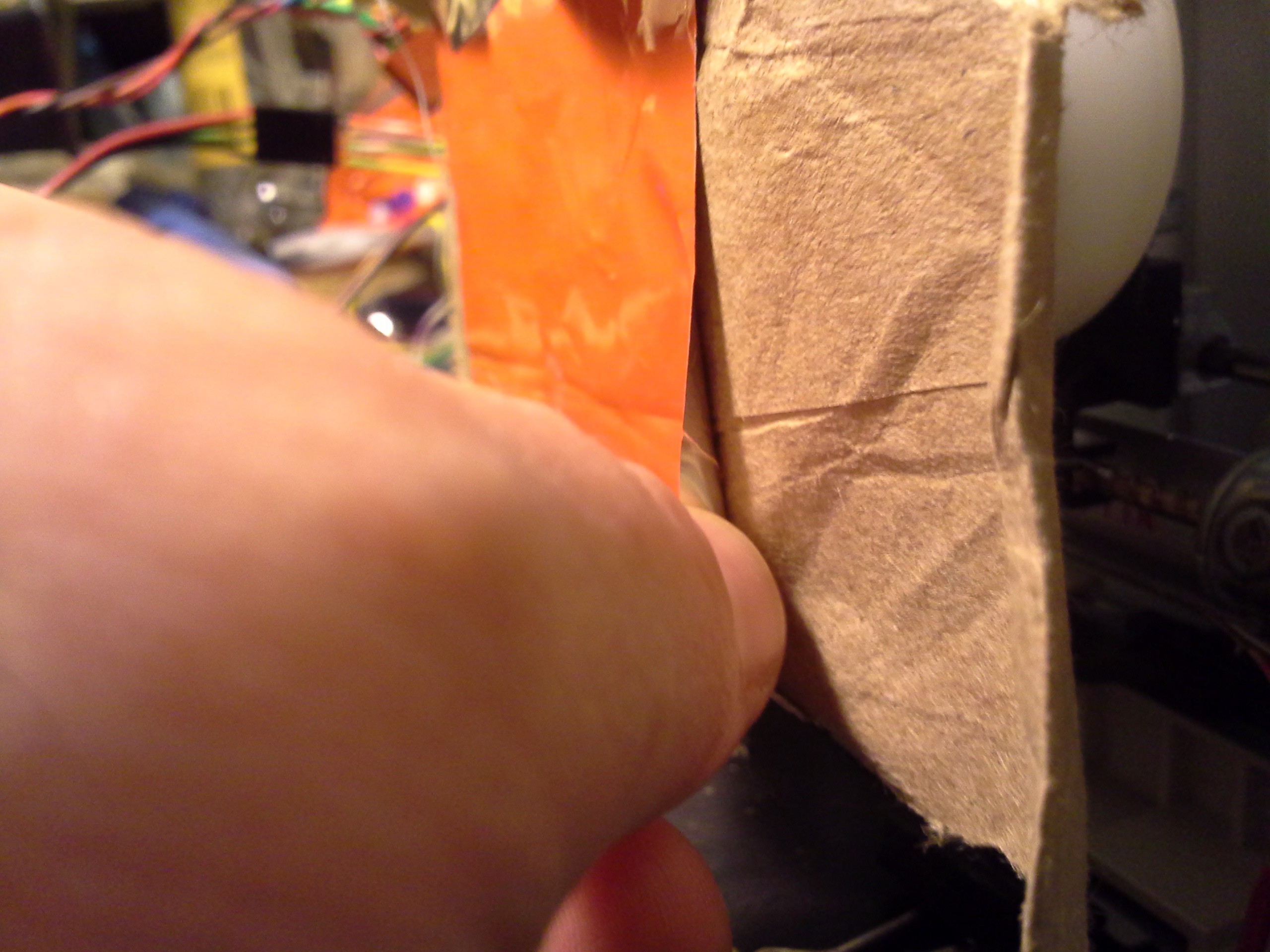 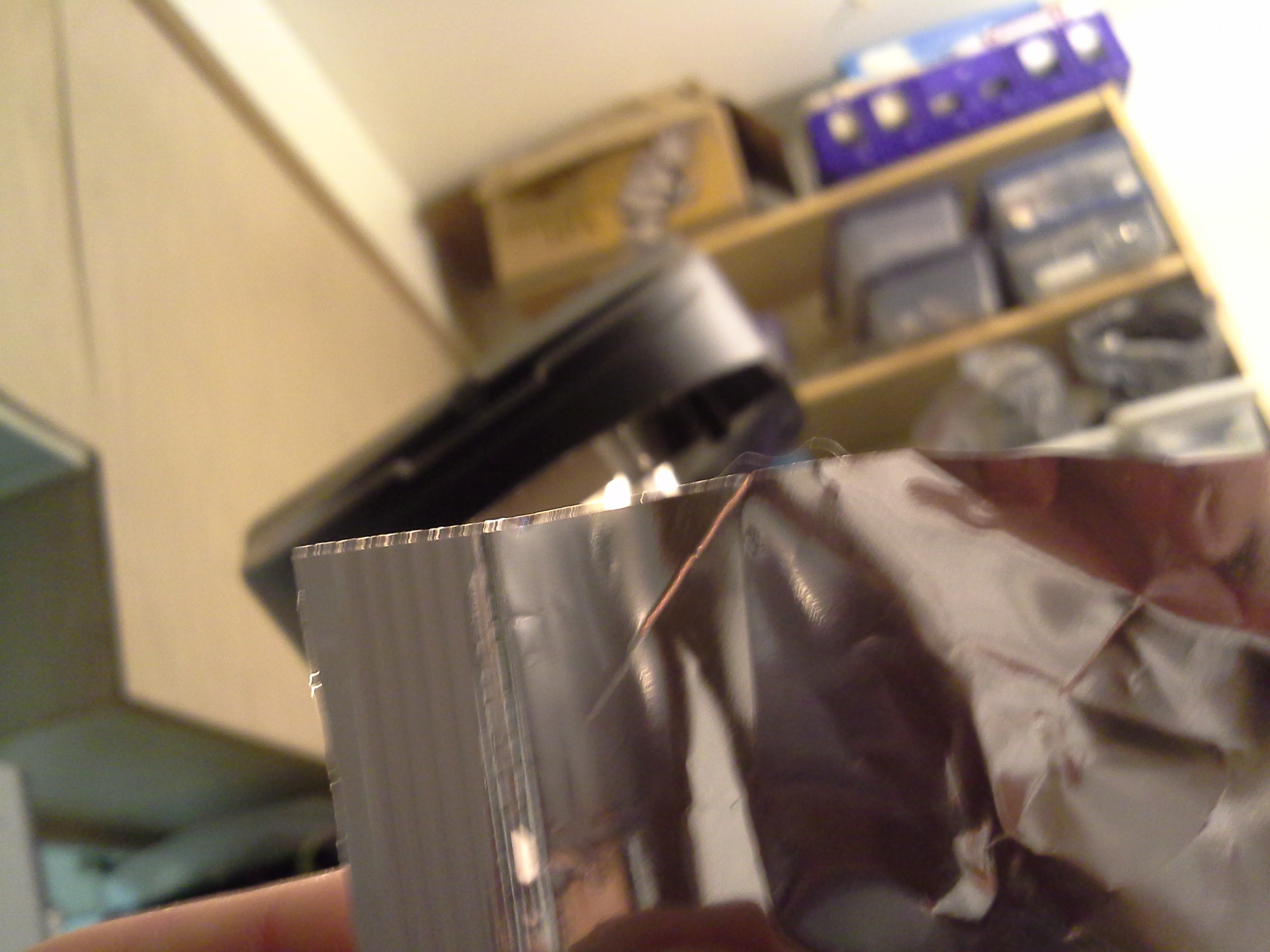 (Actually, upon looking at it more closely, it almost looks as though the orange ink is still on the other side... Interesting).

The material is a little weakened where it was etched, as in it wants to fold down that line, but trying to rip it takes some effort, so there's definitely a bit of "clear" material left-over...

Hah, apparently I had a photo on my camera from the first-run... This bag was mostly-red with some black on it. Among other surprises, the red burnt through, as well. 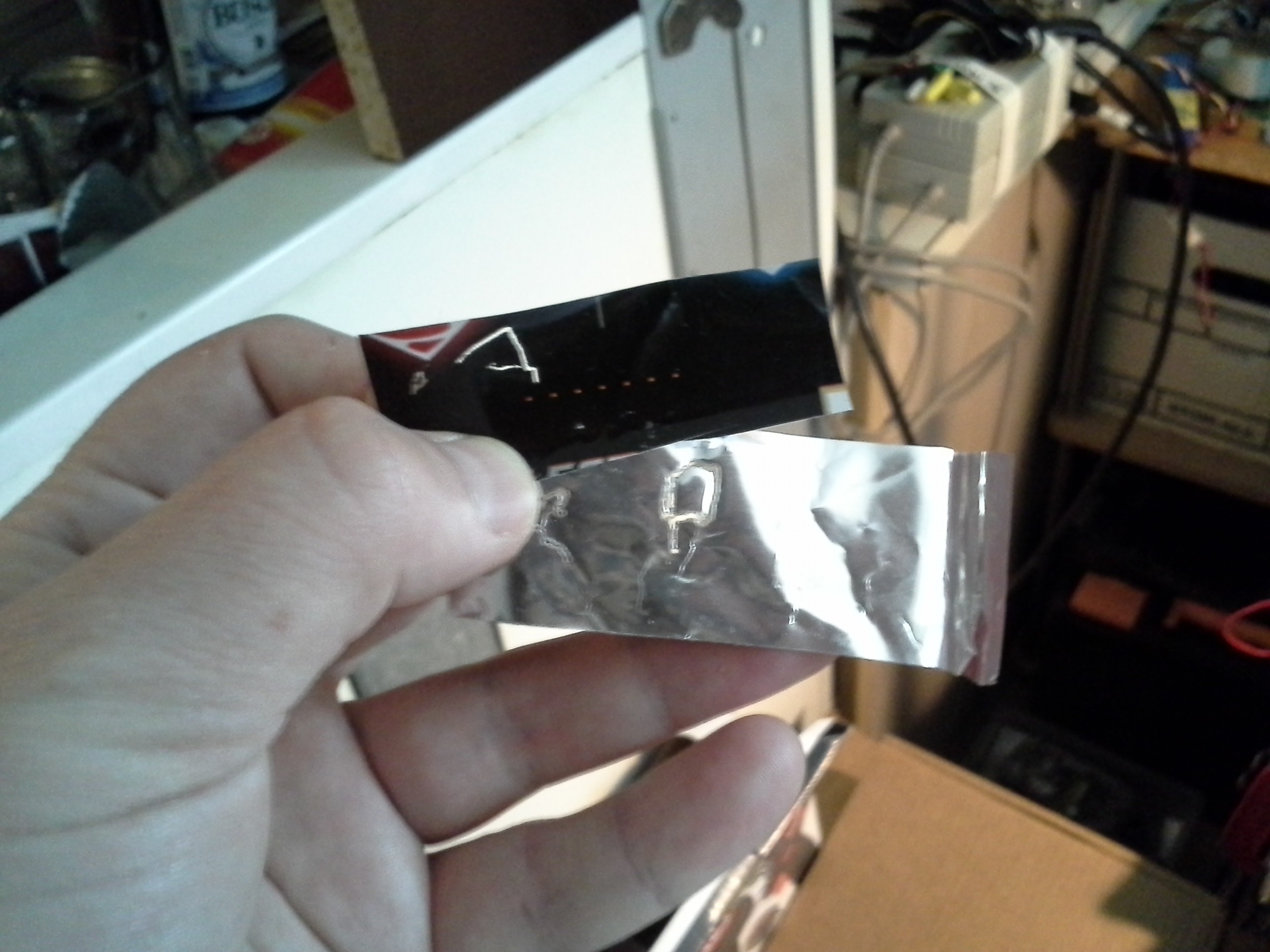 Looking very good! And I can see you had fun trying different stuff. Impressive that it can burn wood at that distance. Fun stuff :)

Indeed! And thanks for the tips, yo!

The distance-thing... I'm wondering about that... Seems to me every piece of optics added to the system would result in a little bit of loss, so focussing it up closer with another lens might result in less available power at the closer focal-point than removal of that lens and a much further focal-point. (Which reminds me, there's still the internal-optics, the quarter-wave-plate, the half-mirror/prism whatever it is that combines the DVD-laser with the CD-laser, the half-mirror for allowing the outgoing beam to bounce-back and be redirected on a different path, and several others, many of which could probably be removed... hmmm).