I used Eagle for the first time since college, what, a decade ago? (Holy snap, how long has there been a Linux version?) And one nice thing I discovered is *really* good HPGL support. 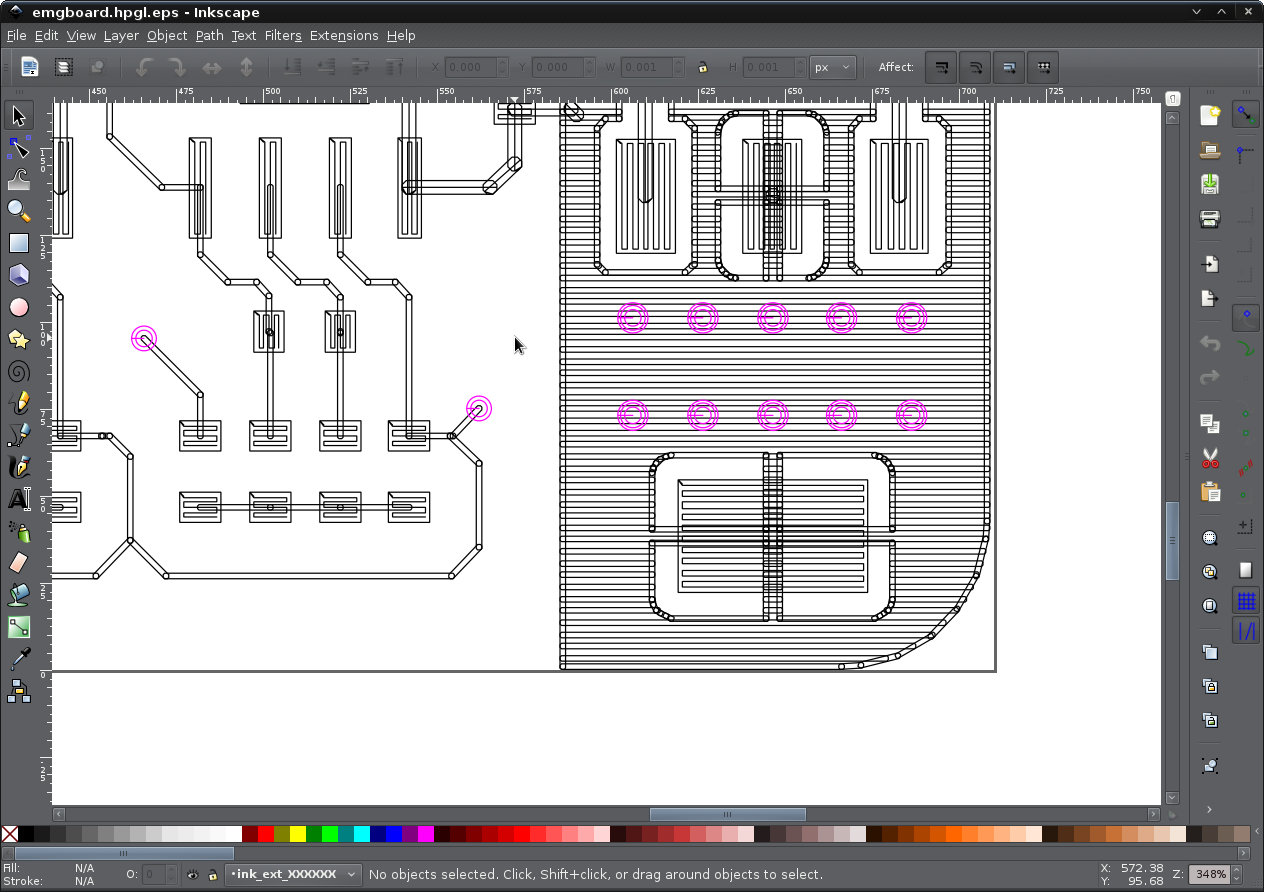 Note the paths used to fill the pads and fill-layers... it also fills wide tracks, and even pays attention to "pen"/tool-width. Awesome.

(PCB design from #Mumai, written-up recently on the blog.)

I'm using grbl. (I'd intended to use HPGL from the start, as I've already done motion-control projects with it, before... but that's another story. And the PC-side grbl tools are pretty sophisticated these days, what with rendering, etc.) And that means I need to convert that HPGL output to G-Code. And low-and-behold the friggin' search-fu finally worked in my favor... "hpgl to g-code" resulted almost immediately in exactly what I needed! Howto PCB from Eagle - RepRapWiki

(Note that most G-code (and similar) output from PCB applications seems to be aimed at mills/routers, which cut the material surrounding the traces, rather than drawing ink (or toner #Mini PCB printer!) where the traces are located, as I'm doing).

The output of hpgl2gcode is quite straightforward (as is the HPGL), so it's not difficult to modify the Z-movements into 'spindle' start/stop commands, if you're using the 'spindle' output to drive a laser, as I am. 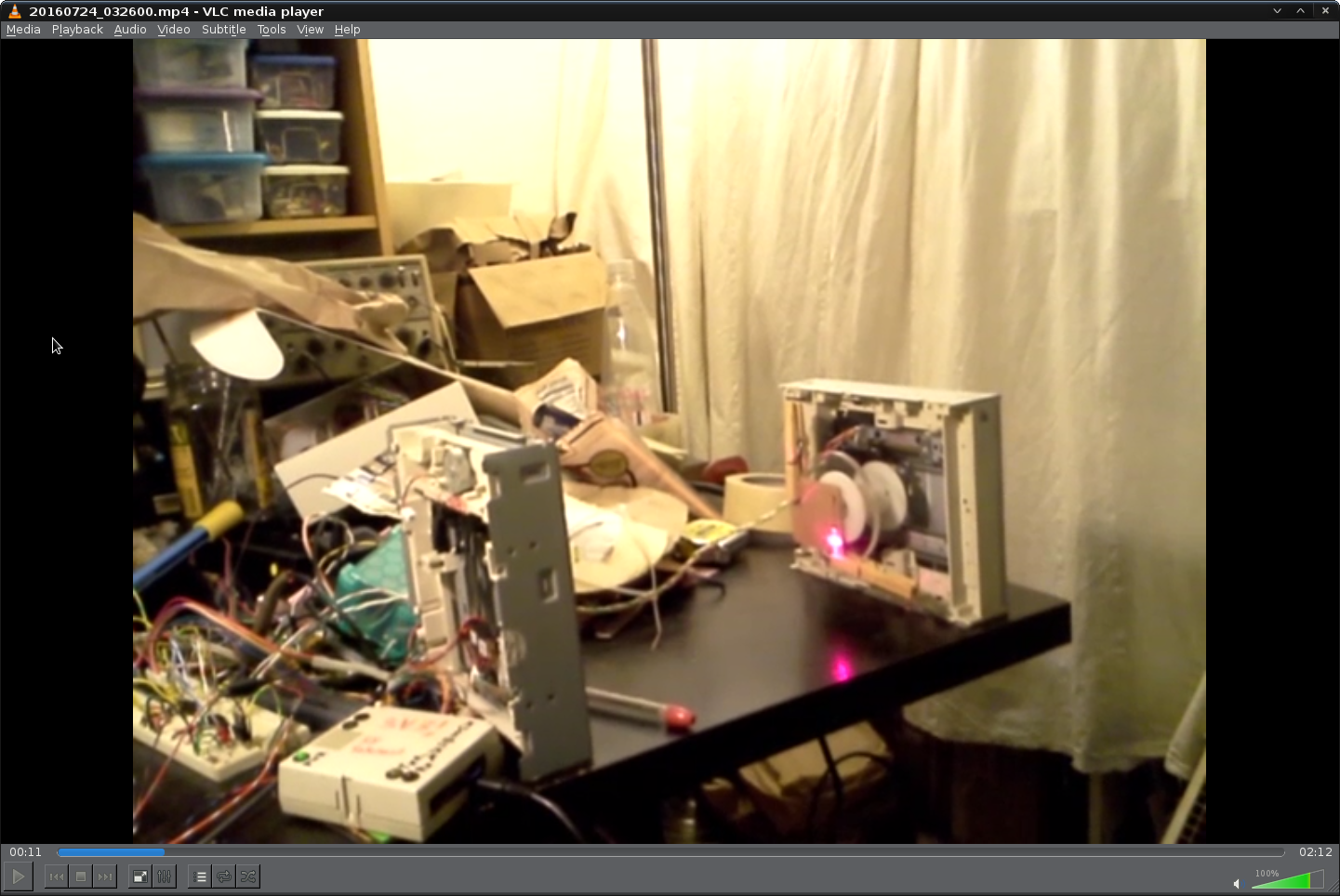 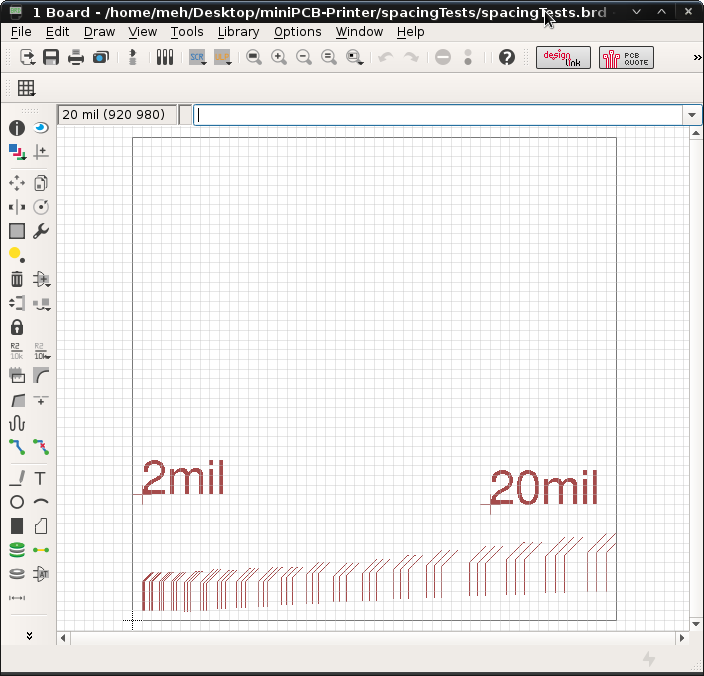 Drawing the text was pretty slow, so I ultimately removed that from the raw gcode.

Here's the visualizer from the Universal Gcode Sender (UGCS) (a *very* nice feature, that definitely makes conversion to g-code worthwhile even if you have a device capable of HPGL):

Interestingly, it doesn't draw all the paths in the same direction, guess it's trying to save time as best as possible. Also, though, it turns out to be a handy test of the precision of the system... 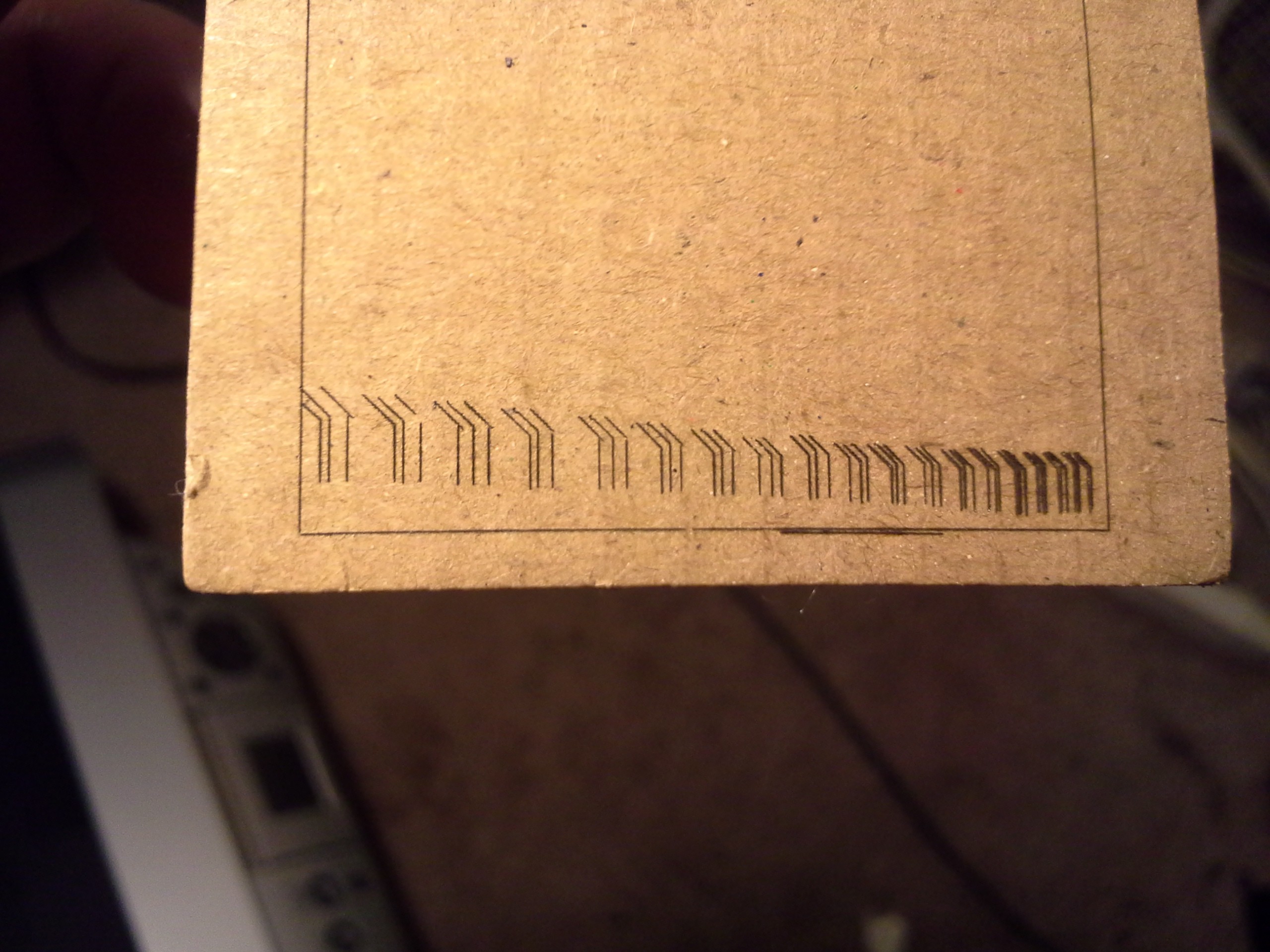 At first it looks darn-near awesome... but upon closer inspection it's easy to see some odditites.

Yeah, I could expect some breaks, likely due to the cardboard fibers varying in various locations, rendering it more difficult to burn... But then there's some overlaps, and those ain't right. Then there's the traces which clearly aren't evenly-spaced... and that ain't right either.

So, I thought, hey, there's a lot of conversion going on 'round here... Who knows where it's coming from, but I can easily think of conversions from floats to ints, then back to floats, then back to ints, and probably even more. So... maybe... And then there's the fact that my PWM-based "microstepping" is pretty much non-sophisticated, but we'll come back to that.

So I spent *way too much* time trying to get a side-by-side between the actual output and the rendering... And discovered many flaws in my thought-process along the way.

Big One: cameras taking close-ups distort the image. Below is a scan (from a flatbed scanner) overlayed (and slightly shifted upwards) atop the photograph:

Note how the two line-up at the edges, but in the middle they're quite far off. Makes sense, but took quite a while to figure out while comparing the photo directly to the rendering. Won't bother showing that. (Oh, yeah, and apparently one of my steppers is wired backwards).

Here we have the rendering compared to the scan:

Kinda hard to see, there, (are there click-throughs to zoom? I forget). 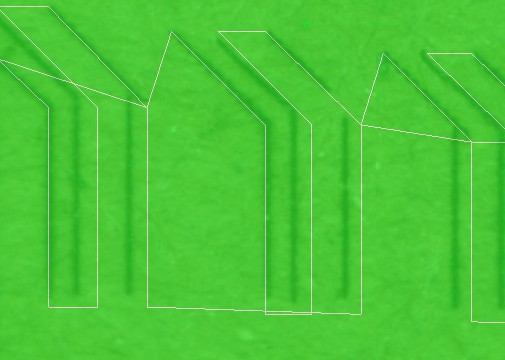 You can clearly see the path to be taken by the machine (in white) isn't exactly consistent for each trace... But the points do all align. So, it appears the most-visible errors aren't due to all those conversions. There must be some error in the software (which I modified) running on the machine, and/or with the steppers themselves.

So, that might make sense, considering I modified grbl to add direct PWM-based microstepping output... microstepping isn't *particularly* accurate, anyhow. And my implementation could probably stand to be improved.

Note some other "features"... there's a distinct jagged-pattern on the diagonals. That'd make sense if single-stepping.

It would also make sense in poorly-implemented microstepping... The motors really do want to hold at certain positions more than fractional-positions, so it takes more energy to move away from a step to a microstep than it does to *hold* at that microstep (overcoming the motor's tendancy as well as external forces). So, it would *also* make sense that there might be some *slop* which varies depending on which direction it approaches each fractional-step. Which might explain some of those "overhangs" etc., many of which appear to be almost exactly one "step" (comparing to the stair-step pattern).

...So, maybe it's best to stick with dedicated motor-drivers with step/dir inputs (rather'n H-Bridges), if you've got 'em, or money, or patience waiting for delivery... none of which are on my plate ;)

Thing is, the traces in that furthest-to-the-left group are separated by 20mils, and off by quite a bit. Worse-still, I haven't calibrated the machine, which means that those are more like 30mils! Also, those overhangs are bad, and the opening is even worse... So...

(hmm, is it just me or are those 'stair-steps" longer than they are tall...? I wonder if gravity has anything to do with this?)

Oddly... I don't recall that much error on the earlier tests which were *much* more complex... 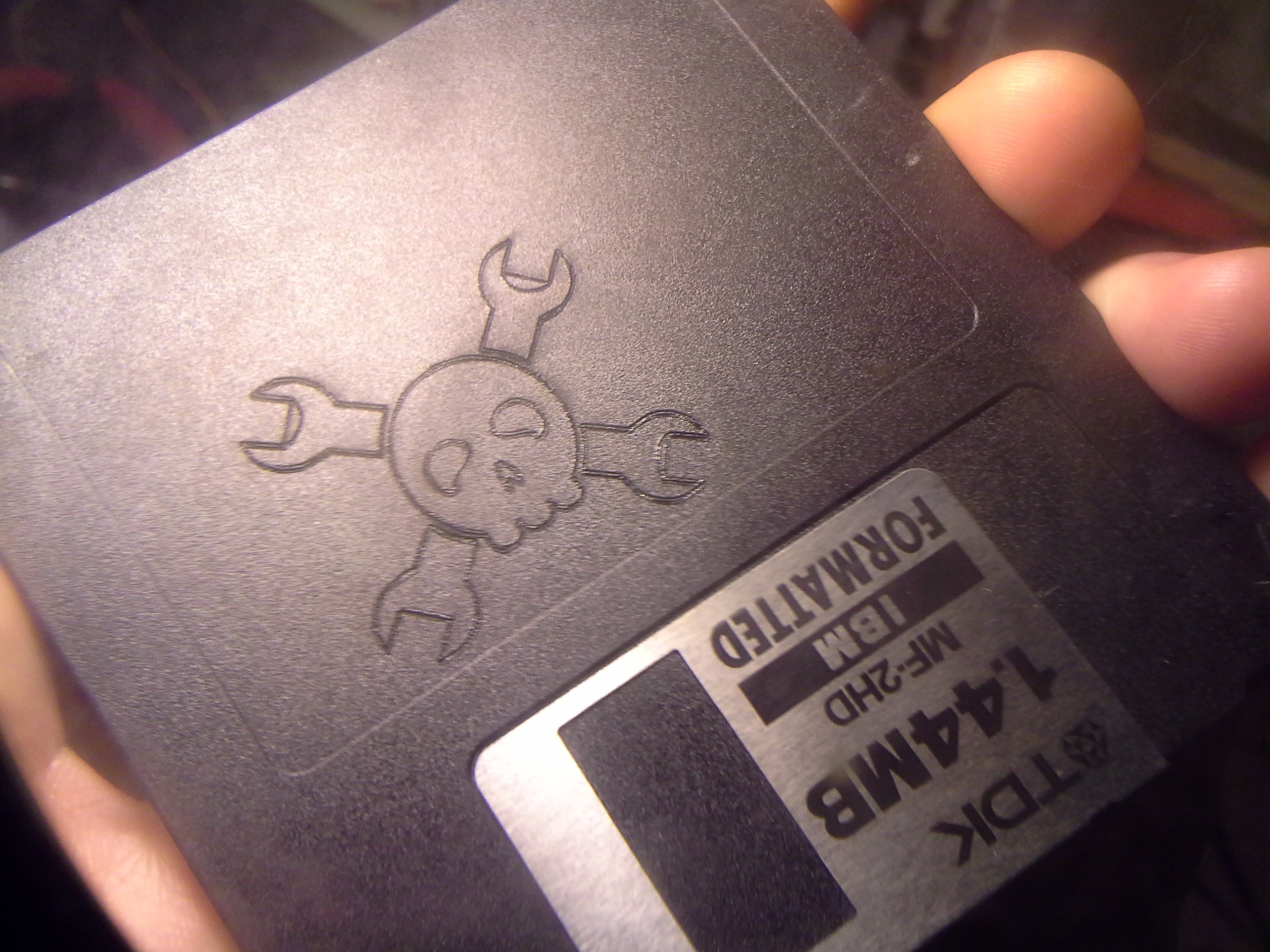 Note that this guy was drawing each line *twice* (except for those weird rounded-insides of the wrenches which I can't explain). But maybe if it drew them from the same direction each time (I'm not sure) then it would be less noticeable...

One plus: That "trace width" is looking like about 7mils, as best I can figure out how to measure it with my calipers.