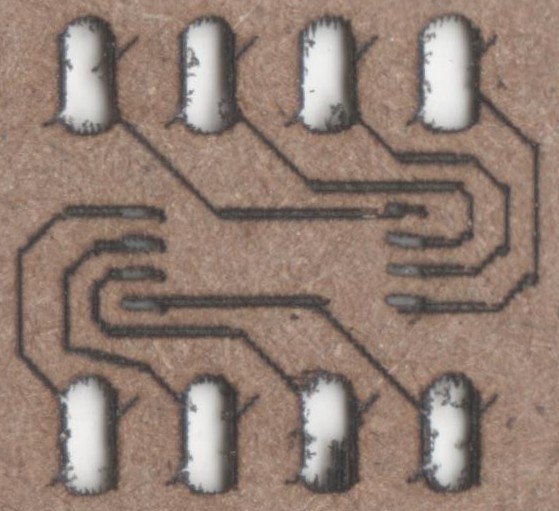 This guy's properly-scaled. HPGL-Settings were a bit off (stupid diagonals through the holes), but otherwise, that's a TSSOP (ATtiny45) to DIP breakout, and it aligns. So, not *perfect*, sure, but definitely doable.

I used a trace-width of 6mils, I measured the beam's burn-width to be 4mils, so I plugged 4mil as the pen-width in Eagle's HPGL output, so it draws each trace twice. This is important, I'll explain in a bit.

This, BTW, is a paper grocery-bag which seems to burn darn-near perfectly every time... Though, with the Pads, the repeated zig-zagging causes it to burn through. That's OK for these early tests.

Got a bit daunted after initially calibrating the system's steps/mm:

Again with the breaks and overhangs, but this time they're not repeatable! Infact, most of the error is non-repeatable in these (now calibrated) tests.

But then it occurred to me: When outputting a trace-width that's wider than the pen-width, it draws overlapping "sausages." Which might just make up for all those weird "breaks"... 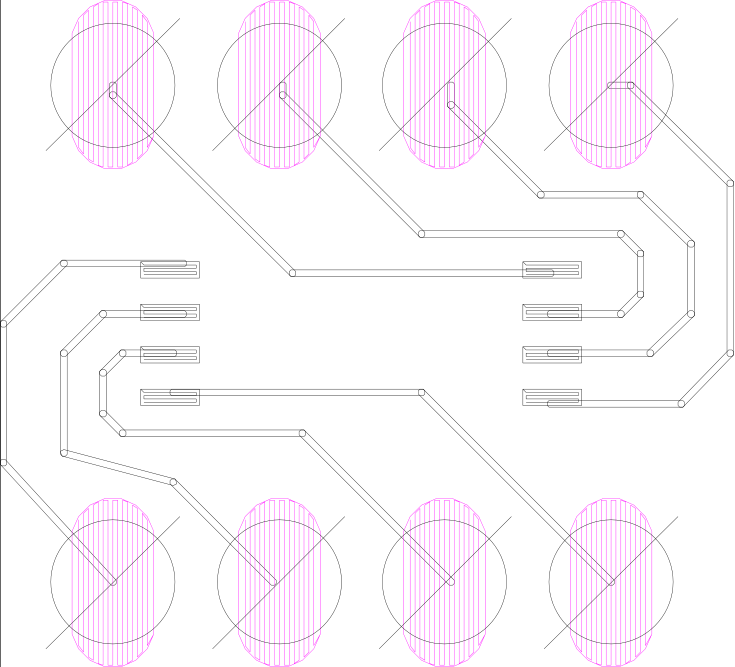 I tried to take into account the repeatable spacing... 18mils between traces looks pretty good in the spacing-tests, but I ran out of space trying to make this breakout board and just went for it... and the results, again, are much better than I expected. Again, that's a TSSOP... I don't plan to work much smaller than that!

One more time... in case my overanalyzing scared yah off:

new challenge: working PCB with substrate made out of a grocery bag.

hmmmm.... carbon is conductive, no?

I mean, it's a little bit conductive, right? Probably not very solderable though.

I tried to measure resistance... no conductivity, even at 2Mohms... So maybe something with laser-tweezers and atomized gold-particles floating in the air...? ;)