Step 0 - Introduction to the Compaq Portable

A project log for Repairing a Broken Compaq Portable Keyboard

The Compaq Portable was Compaq's first product. It is an amazing machine, but its lousy keyboard doesn't hold up over time.

So a few weeks ago I was looking around one of my favorite online auction sites, http://www.shopgoodwill.com/ and came across a Compaq Portable (the original) with bids going around $5. I watched the auction, put in a bid, and won it for $5, a hell of a deal. Well, unfortunately shipping that heavy beast cost me another $45. Whoops.

So a few days later the monster is sitting on my kitchen table and I power it up. Amazingly enough, it seemed to survive the trip without issue. I half expected a broken yolk on the CRT or something. Anyway, the first power-up test worked well. No smoke, no fire. It beeped and wanted a boot disk. Success!

Unfortunately I didn't have a 360k 5.25" bootable floppy around at the time, so I didn't get very far. I powered it off and put it aside.

Fast forward one weekend trip to my storage unit and digging through some old boxes of stuff, I came back home armed with a bootable floppy and a old Mountain DriveCard. A kind of 20MB hard-drive-on-an-8-bit-ISA-card device, which I used to use way back in the day on my last 8088 IBM. I figured if it wouldn't boot from the floppy, the DriveCard should work.

(It's amazing to think that this hokey thing from 1986 still works, and its practically my go-to device for debugging and testing vintage computers. What's even more amazing is the price the sucker commanded back in the day - $1,195! Apparently that was a excellent deal in those days! - Google Books - PC World Review in 1986)

Well, surprise surprise, the floppy drive didn't work, and while I was mucking about with it, I started to suspect that there may be a problem with the keyboard, but I dismissed that thought at the time. So I pushed onward and put the DriveCard in. At the same time I poked around the system to see what other kinds of goodies were in it. Interestingly enough, not much had been changed over the years in it. Same 2x 5.25" floppies, a floppy/parallel controller, a CGA card, a old 2400 baud modem, and a Central Point TransCopy card. Interesting. I pulled out the TransCopy card, which goes in between the floppy controller and the drives themselves, thinking that might be causing it to not boot the floppy, but nope. No dice. Drat. 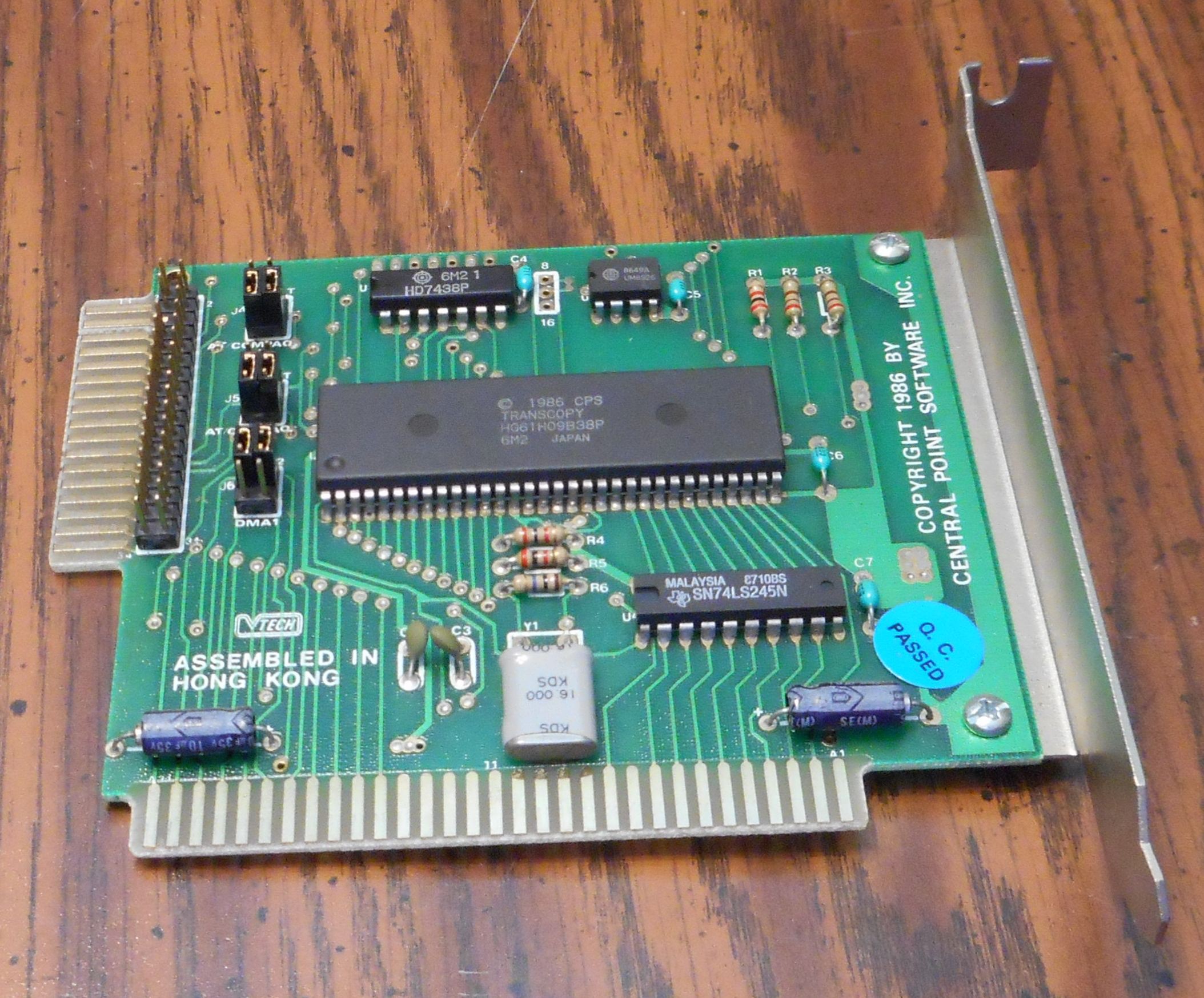 There also was a strange interposer card on the CPU.

Here it is removed from the system. Apparently this is a dClock RTC, sold by Microsync in about 1986. I have since removed the absolutely stone-dead lithium battery. Here's an ad for it from the March 1986 issue of InfoWorld. (As a side note-if anyone has any information about this device, or the software that's supposed to go with it, please contact me!)

Anyway, so I went ahead and put the DriveCard in. Lo and behold, it booted! A click, a whir, a bunch of drive head read noise, and I was looking at an MS-DOS 5 prompt! But at this point it became obvious that the keyboard was unresponsive. Odd.

Step 3 - Trying to Fix the Problem

If you measure how the dClock is connected, it'd be easy to write a little piece of software to load values from or into it.

Unfortunately, that also involves identifying the ICs under the battery socket.

(In case it wasn't clear, that's an offer. Get me something equivalent to a schematic and I'll write that software)