A project log for HEXABITZ - Modular Electronics for REAL

A new kind of electronic prototyping!

Hexabitz arrays are fully-distributed, multiprocessor systems. Each configurable module has its own MCU. Modules connect with each other to form an array, similar to the way computers connect to form a network. Having separate processors -instead of embedded multi-cores- in the same array gives you the flexibility of running them at different clock speeds or even mixing powerful, expensive processors with small and cheap ones.

This architecture dictates having a separate firmware uploaded to each module. You are required currently to write, debug and compile code for each module separately -while keeping in mind all the interactions between these modules- since there is no technology to support intuitive multi-processor software development. I’m looking forward to the day where we can write a single software -as if we were developing for a single target- and the intelligent compiler would then dissect this software into small pieces, figuring out all the required interactions between these modules on its own. Hopefully, it won’t be that long!

Until we get our hands on such a revolutionary tool, we have to figure out ways to design and develop code for complex arrays so that an array of 10 modules does not take 20x development efforts. Fortunately, there are lots of tricks and solutions to substantially reduce the amount of work needed. We will discuss some here and in future posts.

In order to support a wide array of users, Hexabitz is designed for three developer levels/personalities:

We will focus, in the time being, on developing and supporting hardware and software tools and components mentioned above. We will do our best to offer more options in the future, especially in higher-level programming languages (e.g., visual programming, Python, MATLAB, etc.)

Figure 6 illustrates the hierarchy of Hexabitz software components how they map to different users. We will discuss next these components and detail the important ones.

The Hardware Abstraction Layer (HAL) and the Cortex Microcontroller Software Interface Standard (CMSIS) developed by ST and ARM, respectively, are the core low-layer drivers for Hexabitz mainstream-implementation MCU hardware. They interface directly with MCU registers and perform the most basic tasks. Most developers do not need to worry about these drivers but it helps to understand how they work and how they can be implemented if you want to dig in further in embedded systems development and optimize the code for your application.

A higher-level of third-party drivers is required to perform advanced functionality such as real-time control and data storage management. Two major third-party, middleware components are currently used in Hexabitz software: FreeRTOS and FATfs. It is also very likely that we add more components in the future as functionality expands.

FreeRTOS is the de-facto real-time operating system (RTOS) for MCUs and small embedded systems. It is open-source and free to use in its standard format, thus, accessible to everyone. An RTOS is a critical tool to ensure synchronous, predictable and real-time execution of software in embedded systems. Although FreeRTOS does not have all the capabilities of a computer-grade RTOS, it does have basic multi-threading (multi-tasking), memory management and access control. FreeRTOS code is complex and difficult to understand for non-specialists. However, from a user perspective, interactions with FreeRTOS become minimal if Hexabitz’s BOS and module drivers are utilized. Currently, Hexabitz is not making use of all of FreeRTOS features but as the platform evolves, we will integrate more and more of these powerful features. In general, each module is always running the following threads (tasks) in parallel (Note that parallel here is an over-simplified notion as MCUs can only execute code serially. The FreeRTOS scheduler, however, cycles between these tasks on every RTOS beat to simulate parallel execution.) 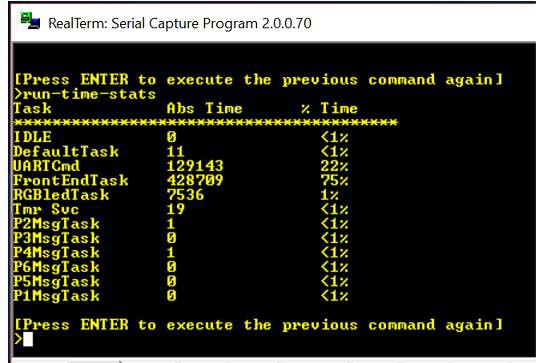 Figure 7: Tasks (threads) running in a Hexabitz module. There are six communication tasks (PxMsgTask), a CLI task (UARTCmd), a DefaultTask, a FrontEndTask and a module-specific task (RGBledTask). IDLE and Tmr Svc are tasks created by FreeRTOS for its internal use.

File Allocation Table (FAT) is a system to manage files on storage media. It is used on personal computers and many embedded systems. FATfs is a free, memory-optimized FAT module for small embedded systems. It enables you to read and write files stored on various storage media (e.g., SD/MMC cards, Flash memory, SRAM memory, etc.) and same files can be viewed or modified on personal computers as well. Storage-related modules utilize FATfs as part of their module drivers. FATfs code is highly optimized and difficult to read and understand. As with FreeRTOS, using module drivers effectively relieves the user from understanding FATfs intricacies while utilizing its features.

BOS is Hexabitz own operating system, built on top of FreeRTOS, and specifically designed to support Hexabitz arrays. It relieves the user from writing code to perform initialization, inter-array communication and housekeeping tasks, among others. BOS also manages the Command Line Interface (CLI)-a simple and intuitive tool for user interaction, as well as non-volatile storage of module and array parameters (and syncing these parameters across the array). Future software releases will introduce more intelligence and automation to let users focus on their end-application and delegate all background activities to the BOS. BOS is an essential part of every Hexabitz software project. Both the BOS and module drivers have the following sub-components:

The BOS is responsible about routing Messages and Streams within the array. Routing is based on an internal routing table that defines the number of connected modules, their Hexabitz part number and how they are connected to each other, as well as the polarity of each of the serial array ports. The last one is particular important for duplex (two-way) communication. As mentioned before, the default state of all communication (array) ports is to have the transmit pad (TXD) on top and the receive pad (RXD) on bottom in order to offer complete modularity and flexibility in assembling modules. For bidirectional communication to take place, however, you need the TXD line of first module to connect with the RXD line of second module and vice-versa. This is possible by programatically swapping one of these port pins whenever the modules are connected and putting the port back into normal polarity when they are separated.

Routing tables can be generated in two ways:

Every time the array boots up, it verifies its actual connections against the stored routing table so that any topology change can be accounted for. We will provide later a detailed anatomy of a sample topology header file and  instructions on how to generate one.

Module drivers provide all module-specific functionality, i.e., all the software needed to use and configure module front-end. Similar to BOS, modules have their own APIs, Messages, Streams and Commands. Each software project is usually created for a single module (because it will be loaded on a single MCU) and thus you should not add another module drivers to the same project. If you have an array of similar modules (e.g., multiple H01R00 modules), you can create a single project and use Targets feature in the software development tool (uVision) to account for the few variations between these modules (e.g., their IDs, etc.) This way you are able to generate, with a single click, firmware images for all modules from that same software project.

In order to make the platform easily accessible for non-embedded-programmers, Hexabitz features a Command Line Interface (CLI) based on the core CLI functionality of FreeRTOS. CLI is available at all array ports and can be accessed from any computer (or any device!) running a serial terminal tool. There are plenty of serial terminal tools that are free and require no or minimal drivers installation. We use a free terminal tool called RealTerm but users can use any other similar software as well. All you need to use the CLI is a cable the bridges module UART ports with other common PC communication ports (e.g., USB-RS232 cable).

Commands sent via CLI are executed instantly and thus there is no need to compile any code. Once the command is sent you cannot go back and change it and it is difficult to execute complex logic efficiently in the CLI. It is still, though, a very handy tool to perform quick tests and build small applications without the need to read a single line in the code! We will post later more details about using the CLI.

All Hexabitz software will be released with MIT license. This means you are free to use our software in your own projects/products for personal or commercial applications. You are not required to open-source your projects/products as a result of using Hexabitz code inside it.

The Reason We Exist