I finally got around to assembling the laser cut frame parts, and everything is looking good. The servos were just barely too large for the holes (and by 'barely', I mean a couple thousandths of an inch); 20 seconds with a file on each servo hole made it fit perfectly. I am not sure whether I should enlarge the holes or not, though... I cut the holes according to spec, so I suspect that my servos are just a bit out of spec. I don't want the holes to be too large, so that the servos are not flopping around. (They are only secured with two tiny screws). If anyone has a thought on this let me know...

Another nice thing with the thinner wood is that the entire body stack is now short enough that I can use 2" #6 screws, instead of custom cut threaded rod. Screws are much easier to work with, especially in conjunction with lock nuts.

I also decided not to assemble the distance sensor mount this time; it was nice to play with it when I was working on the API for the HaD Prize, but since then I have not use that much. The kids like to just use the remote control.

The laser cut frame is definitely lighter than the MDF one, although at the end of the day the total difference is less than I thought - batteries and servos contribute the most to the weight. The laser cut parts do look pretty sweet, though!

The 'after' shot is included below, with the 'before' shot and some assembly shots included after the break. 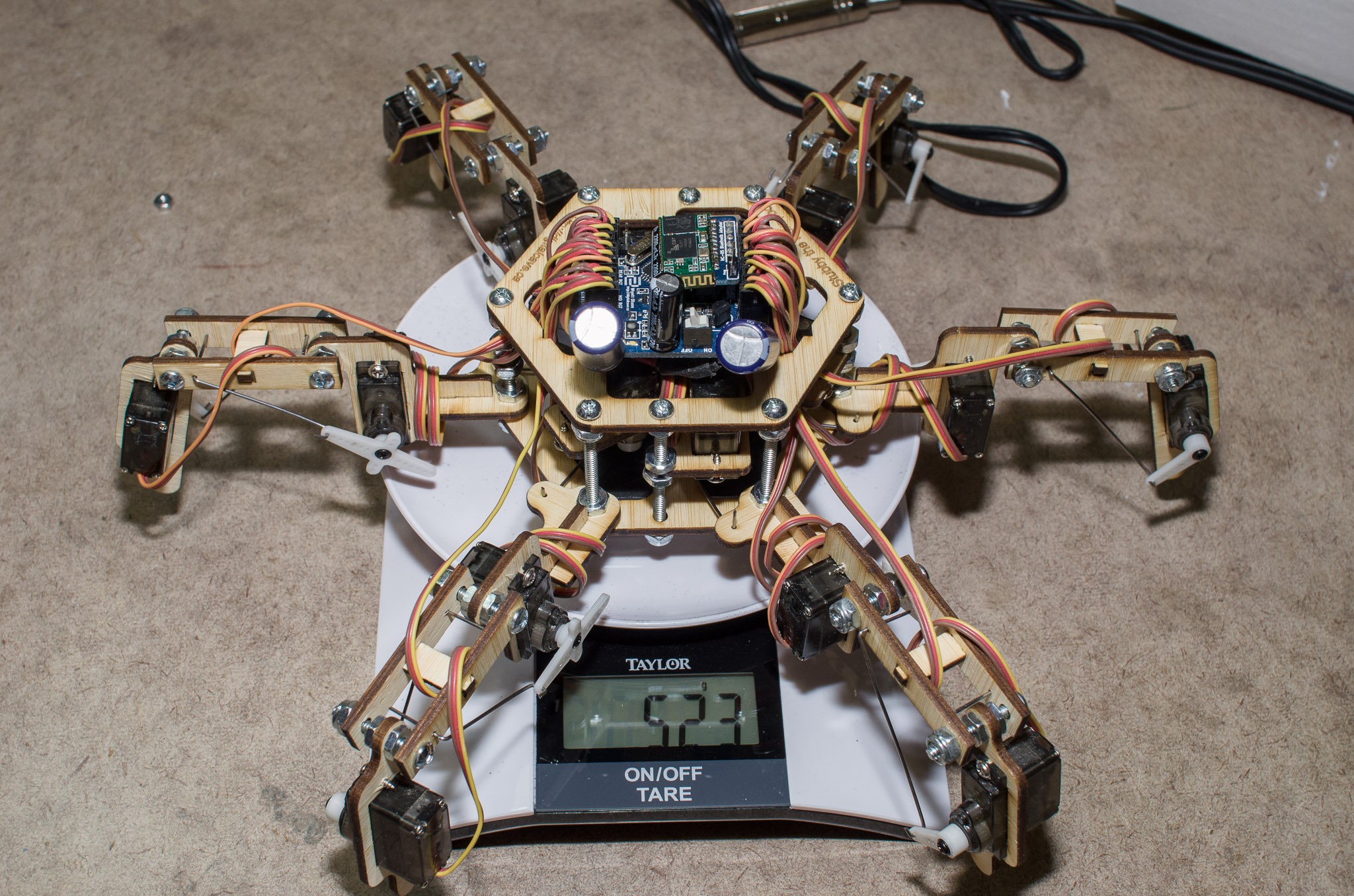 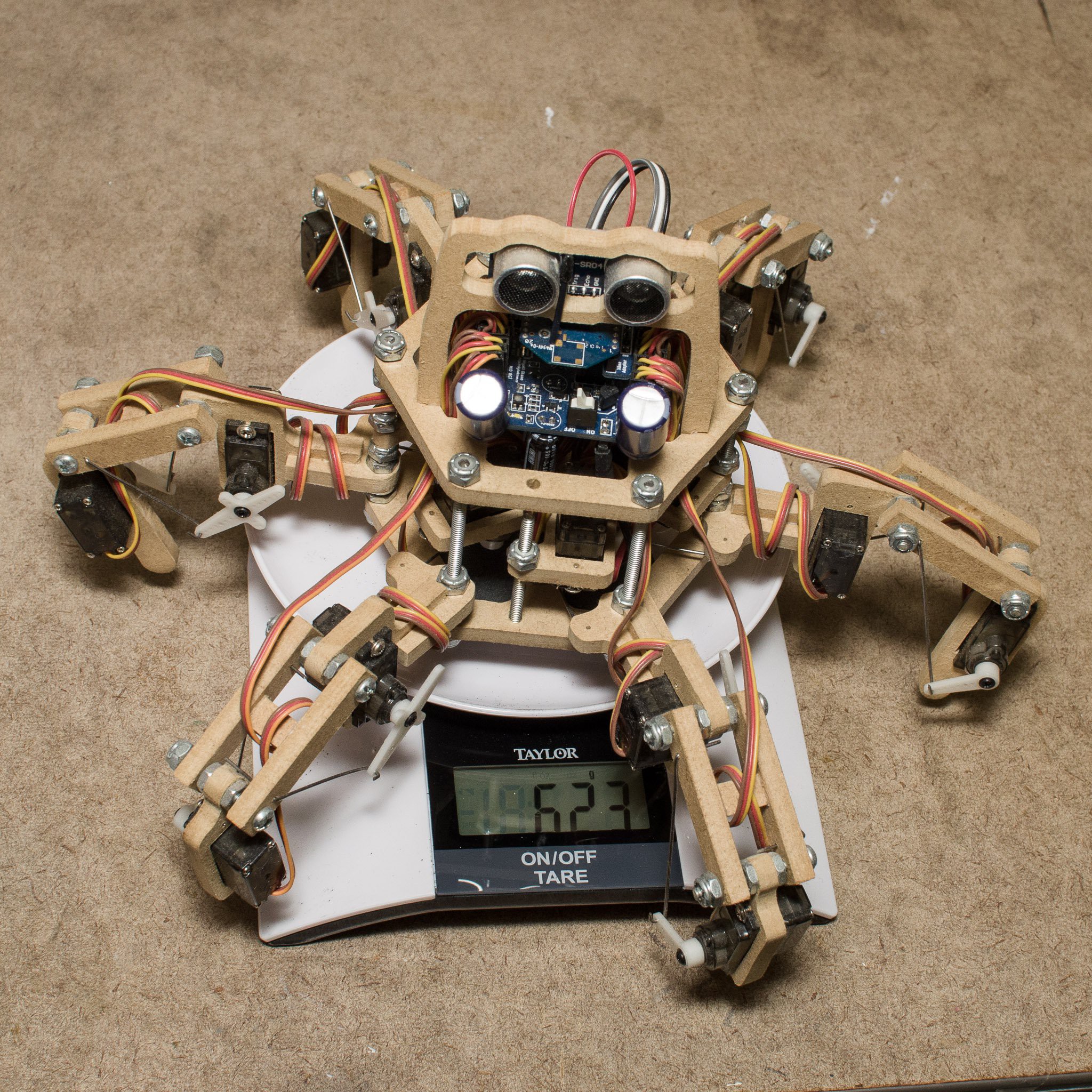 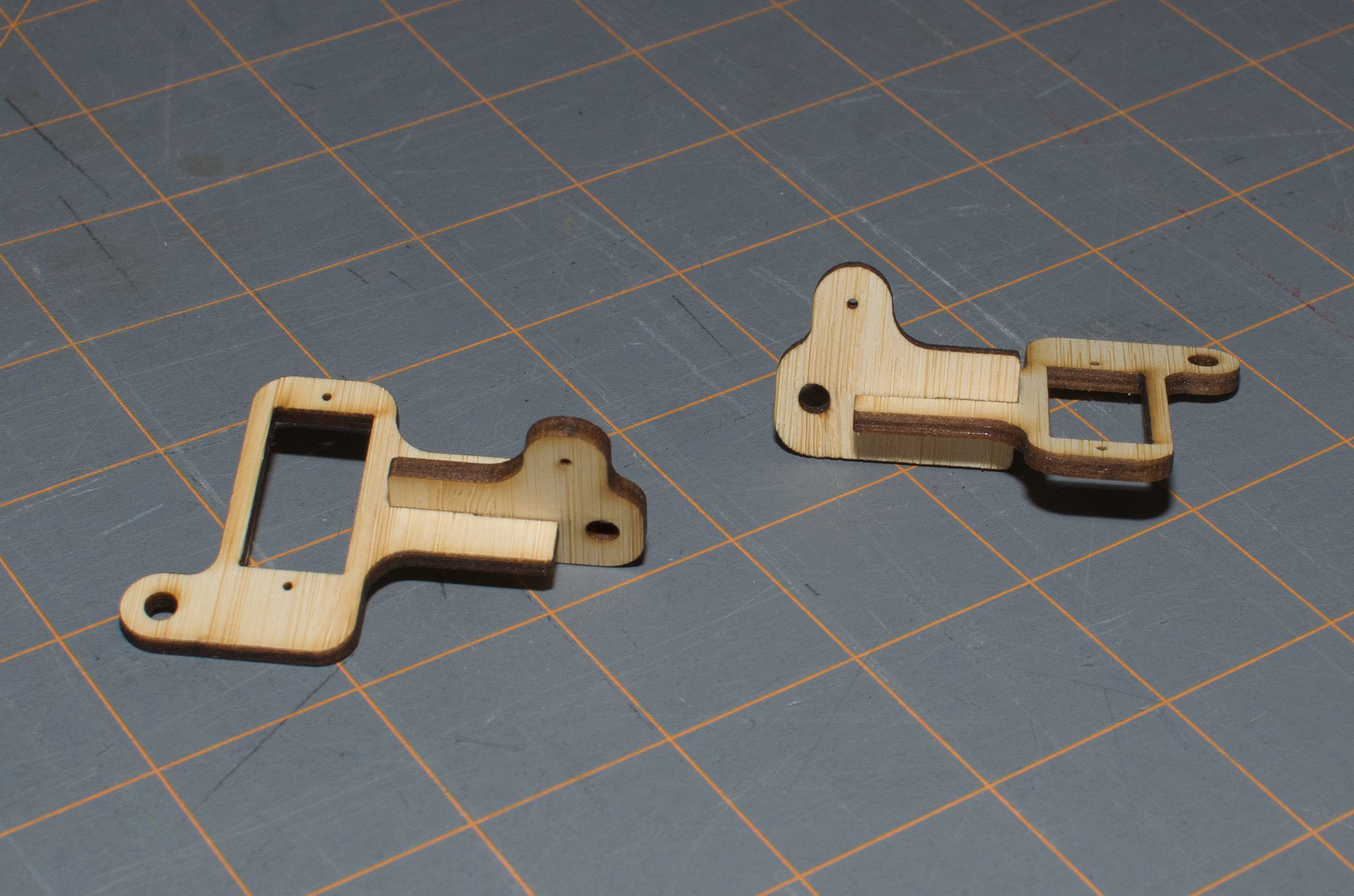 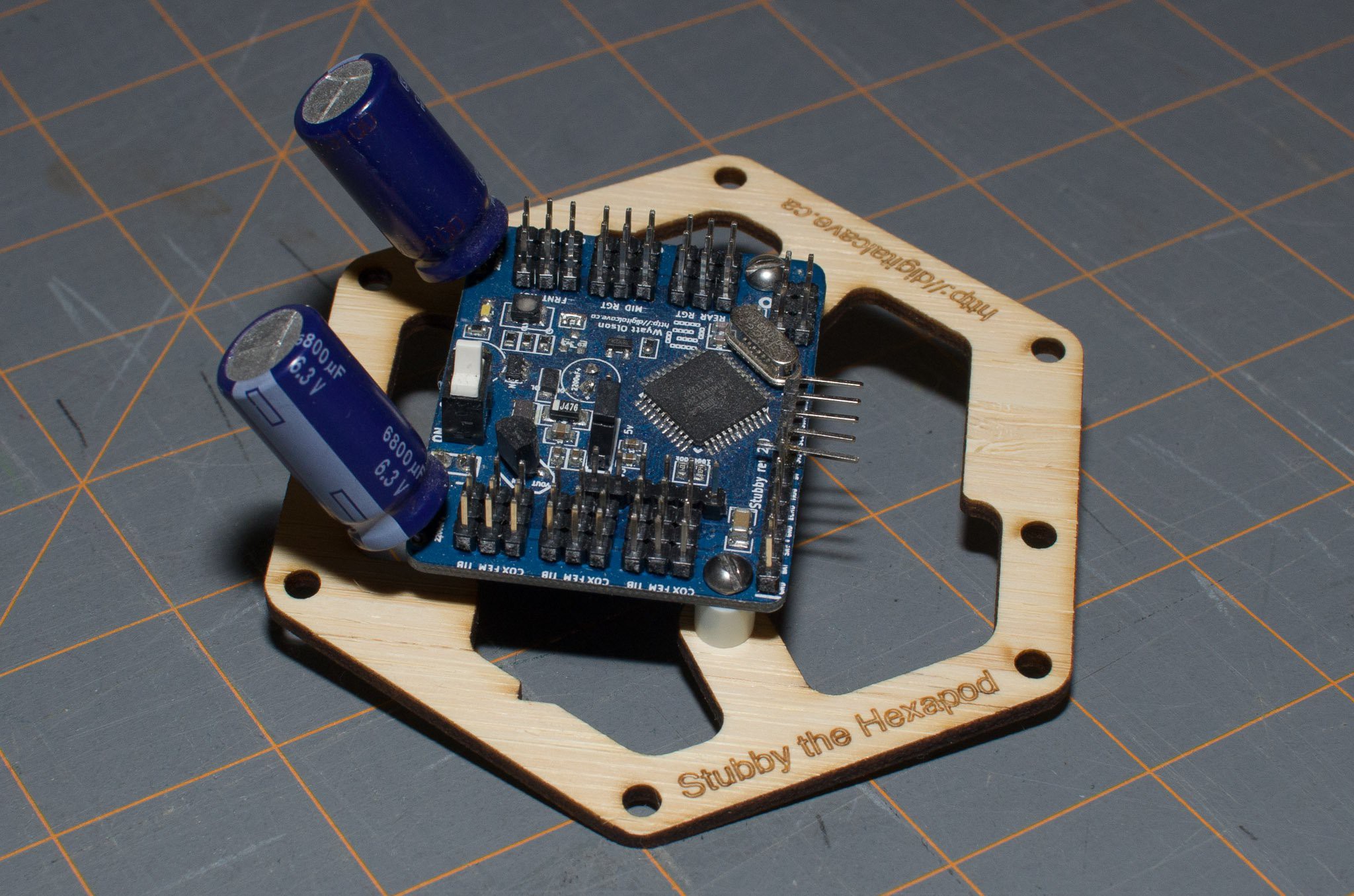 (Note: the two 2200uF caps should be on the top, not the bottom. If they are on the bottom, there is not room for the coxa servos in this thinner stack). 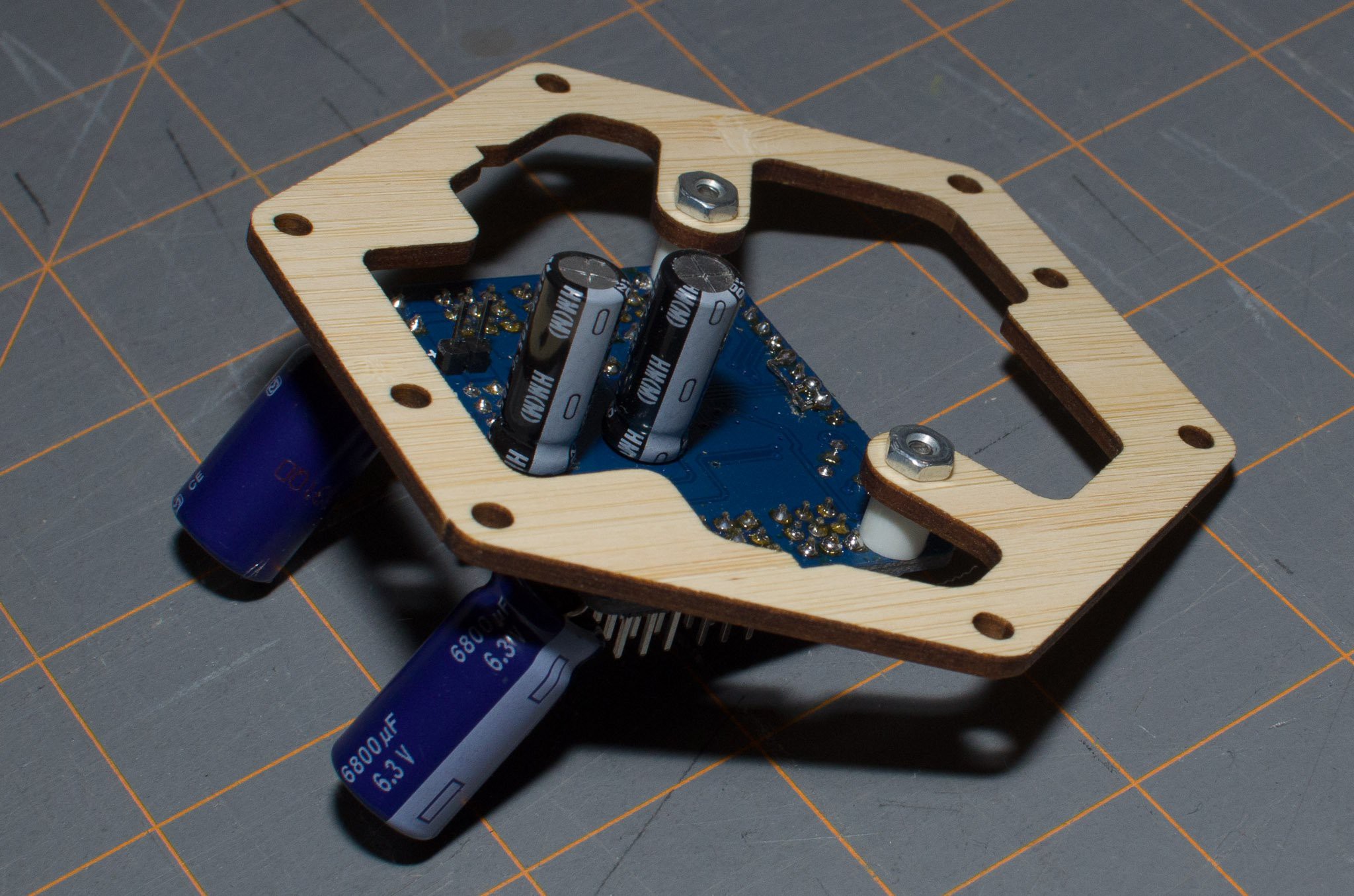 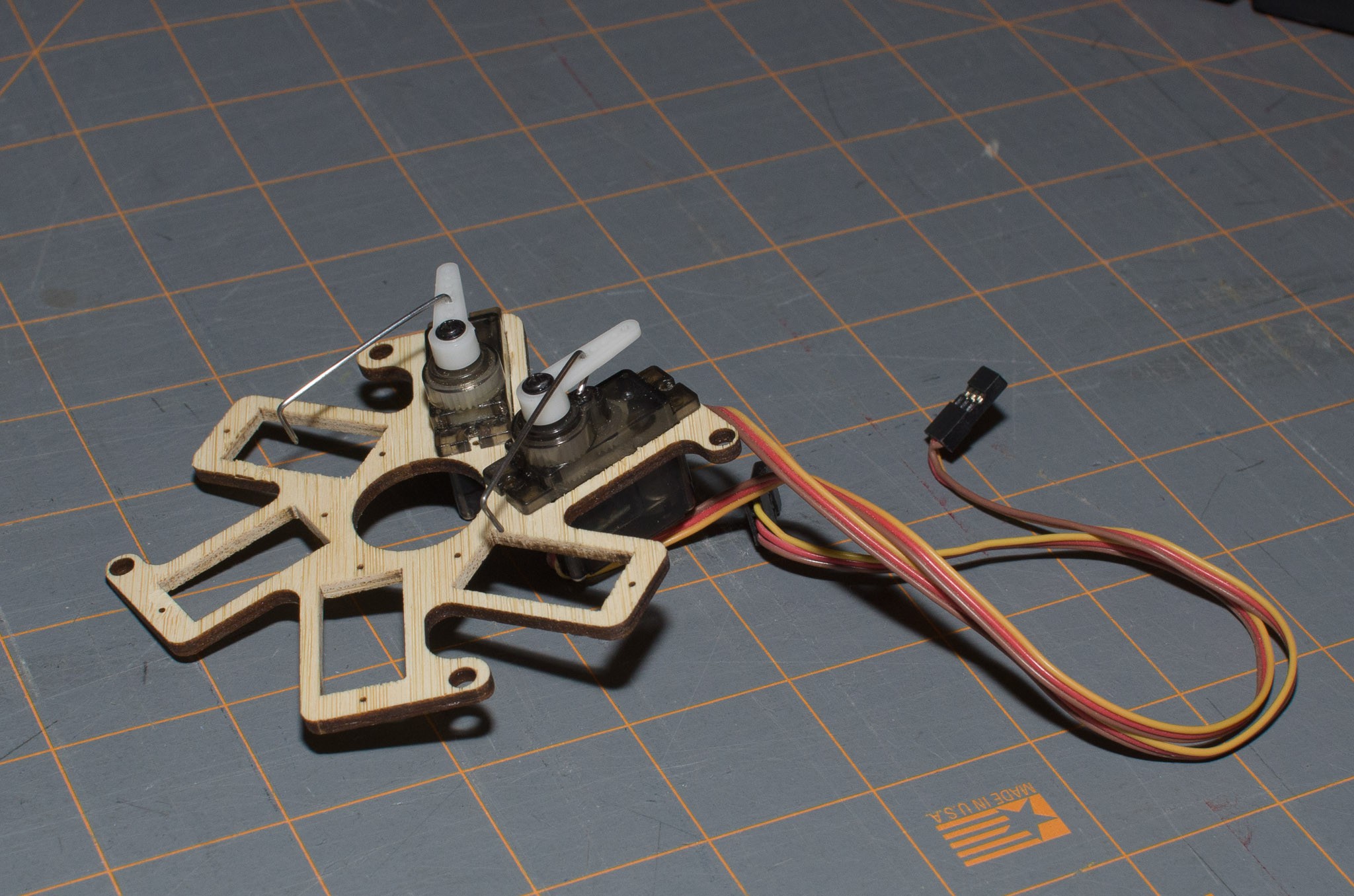 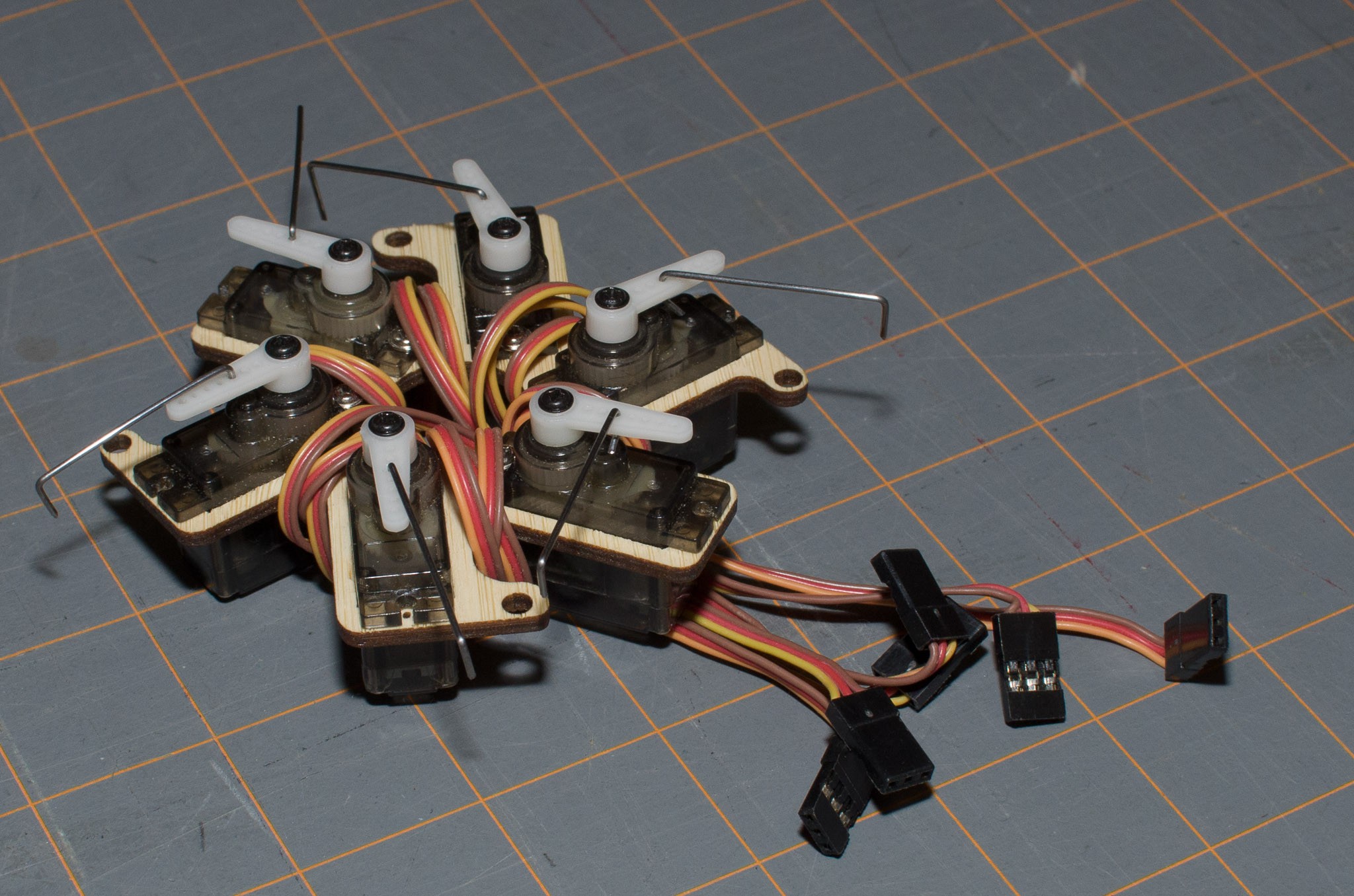 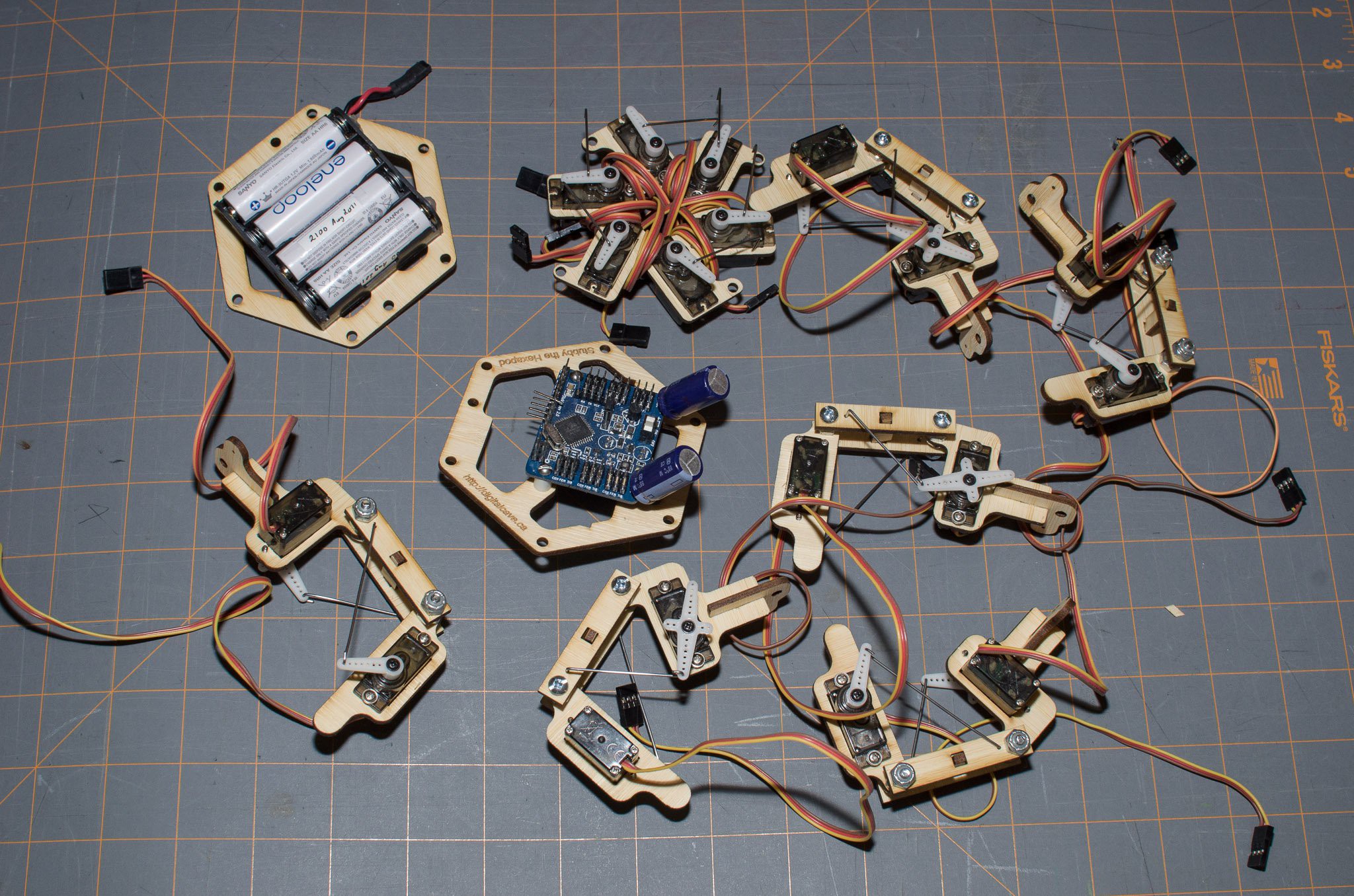 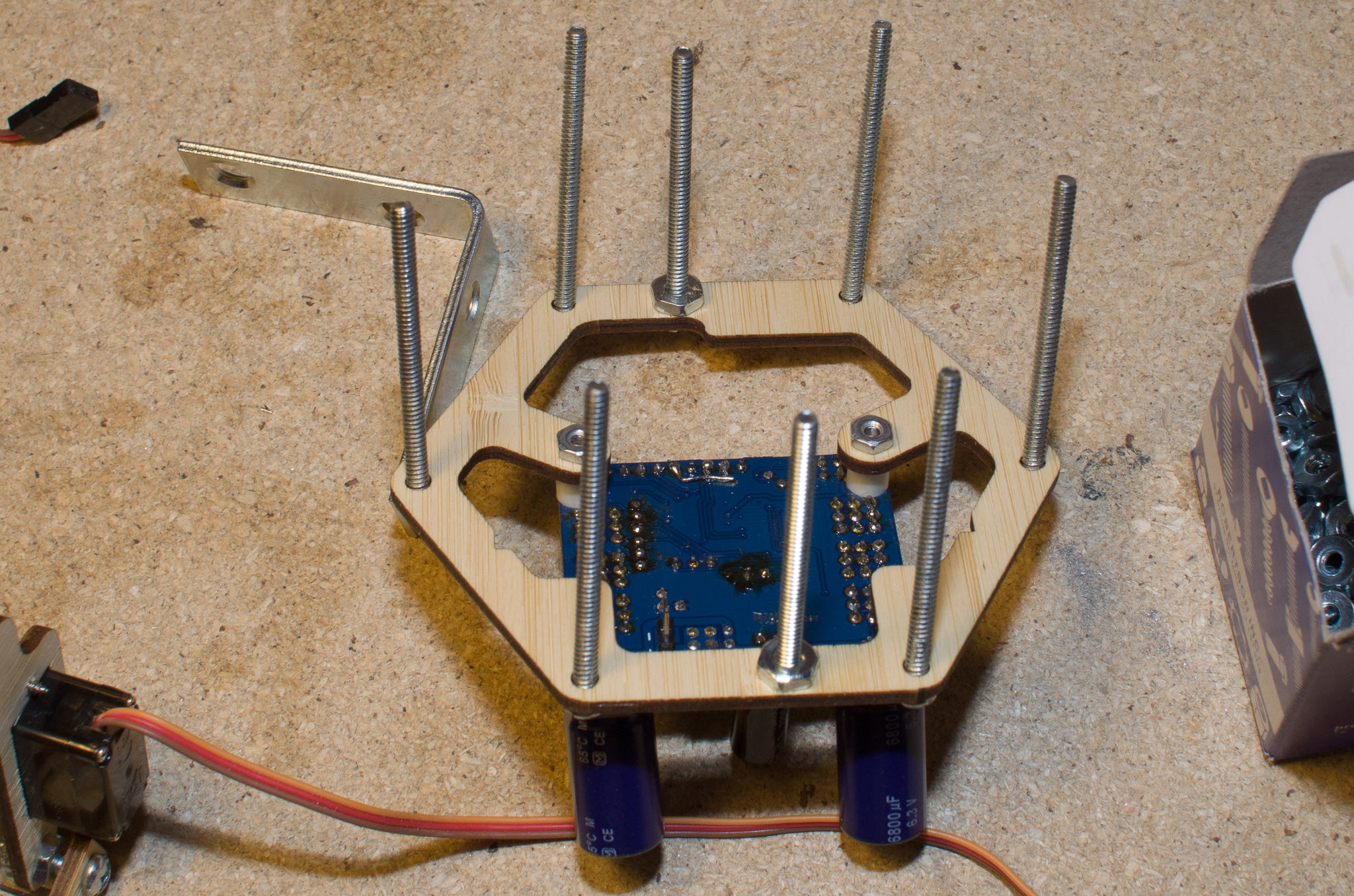 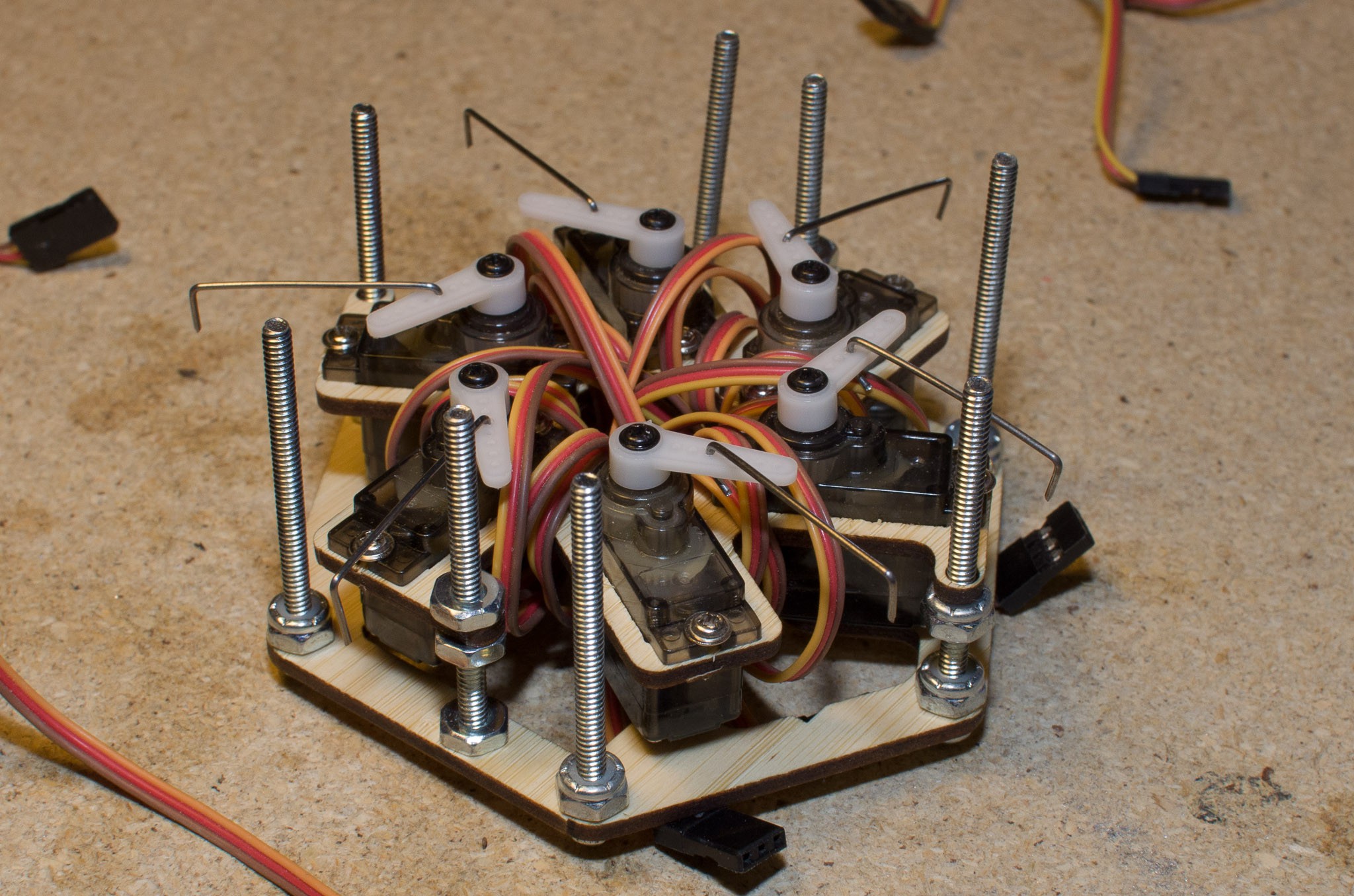 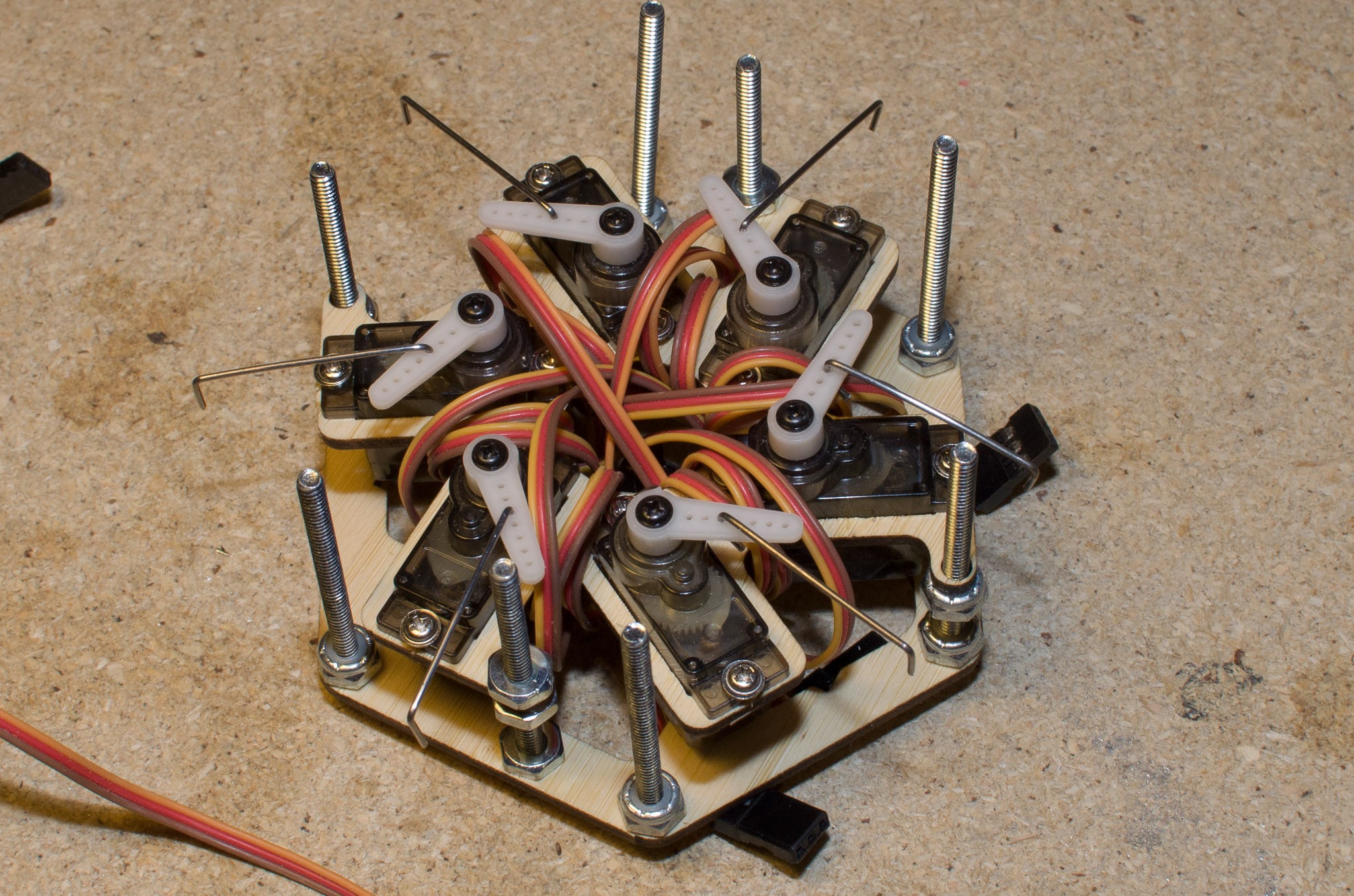 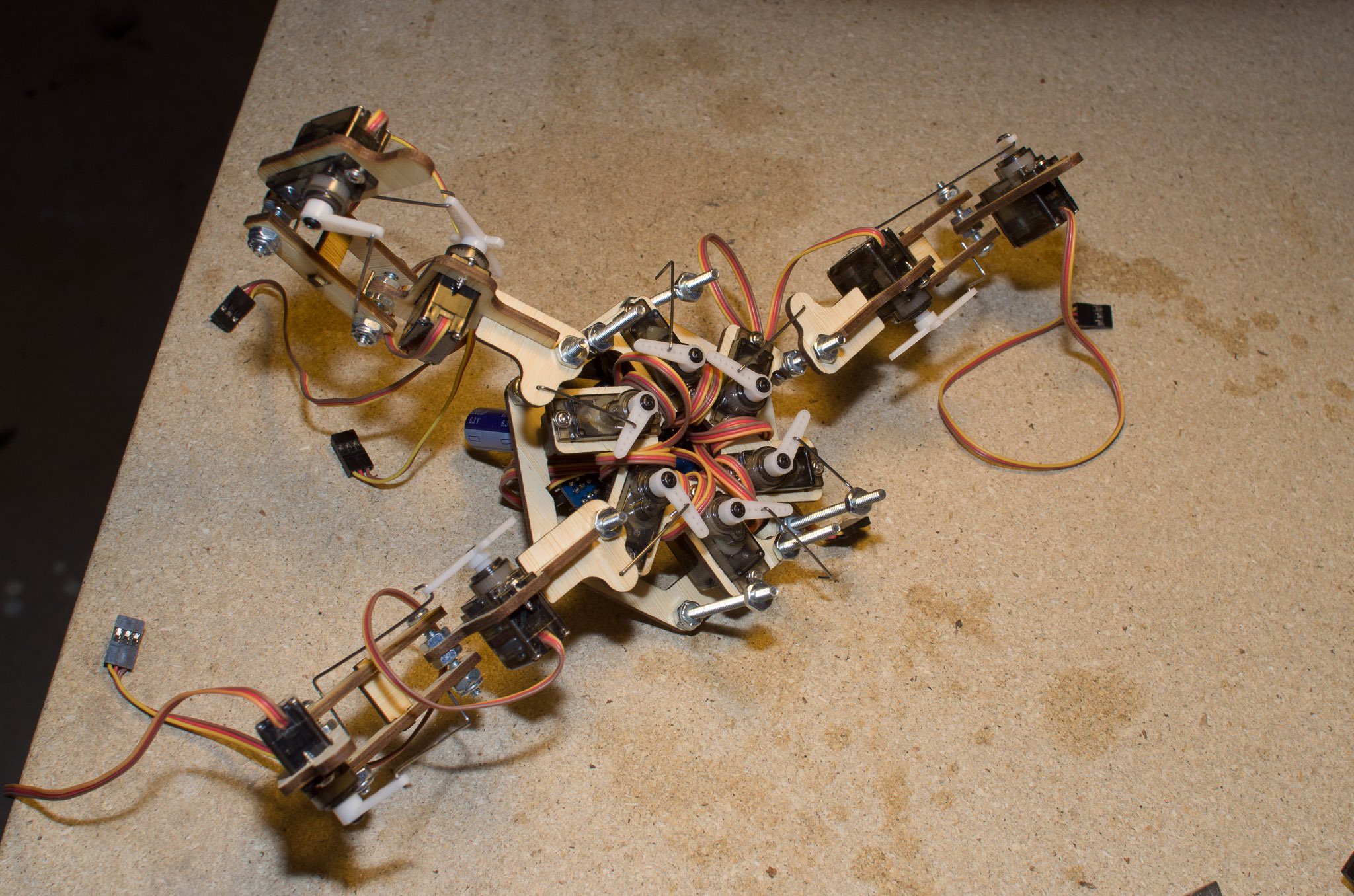 Hi, I just found out that I could use thread locker (like loctite) on normal nut instead using nylon locking nut. And my order of m3x50cm threaded rod from ebay just arrived :-)

Hi, I'm unable to find 70mm M3 bolt, the longest availabe is about 50mm, is that enough? Looks like it will take  long time to finish. I already got the frame, the servos are on the way, and the pcb need to modified a little bit to suit the availability of the components on the local store.

I'm using 1/4" thick acrylic frame (the one whom commented on your youtube video) , its too bad if I must discard current frame and reorder correct frame. Btw, currently I have idea about controlling stubby using android, but its a long way to make it happen.

With a 1/4" frame you probably won't be able to get by with 50mm lengths.  That said, there are other options rather than throwing out what you have: I couldn't find 70mm screws either, so I bought some threaded rod and cut it to length.  It was only on this latest go-round that I was able to use screws.

I took the distance sensor and magnetometer off since I didn't use them much anymore. The laser cut frame has space for it still if I want to add it later.

I would be quite interested in using a Lipo but I don't think they play well with servos. The 1S cells are too low voltage and the 2S cells are too high. If I used a 2S I would need to add a step down regulator which can source high currents (I am not sure of the required current but even if each servo is 500mA, the total of 18 would be 9A total...)

The screws are a bit heavy... I have had problems sourcing nylon screws for a reasonable price. I need to takeanother look and see what I can find.

Does it have to be screws? How about spacers, like those? http://www.aliexpress.com/item/Durable-160pcs-M3-Nylon-Black-M-F-Hex-Spacers-Screw-Nut-Assortment-Kit-Stand-off-Set/32437486883.html

As for LiPo batteries and servos, a regulator is a pain indeed, but since this is a common problem in the remote controlled model community, there are plenty of "UBEC" (simply a switching regulator) modules available for high amperages. They even have overdischarge protection and what not.

Personally, since I'm not an engineer, I use a single 3.7V LiPo battery in #Tote, without any regulator for the servos. It's out of spec, but it works with the SG90 and SG92R servos I use. The servos are a little weaker, but it doesn't matter with the small weight of this robot. You could probably compensate for that by changing the PWM frequency. Of course this is a hack.

All the joints are built around the principle of having the center part tightly connected to the screw using two nuts (one on each side), with the ends captured with lock nuts but allowed to rotate freely.  This is my poor man's alternative to using a bearing of some sort.  Since the ends are the parts that rotate, and since they are far apart from each other, there is very little play in the system.  If, on the other hand, the ends were tight and the center was loose, the center piece would flop around.

So to get back to your question... I don't think spacers would work (or at least I can't think how to make it work).  I don't see how you could make the center piece tight enough to keep things stable.

As for the lipos... yeah I have seen the UBEC devices, but all the ones I have seen max out at about 5A until you get into the larger / more expensive devices.  What I really should do is put in a dedicated buck regulator built to spec in the next PCB... however I have no plans on making a new PCB anytime soon.  Too many projects, too little time.... ;-P

Ah, I forgot about how the joints are made. In that case nylon bolts are probably a bad idea anyways -- they would bend.

Have you considered using plastic (nylon or acrylic) screws to further reduce the weight? Those metal screws look heavy. What happened to the distance sensor mount? Are you going to use some other sensor?

I see you are using standard rechargeable nickel batteries (either NiCd or NiMH). Have you considered using a lighter LiPo instead?