- When the a/c or heat is on at my house, the fan is noisy and makes it hard to hear the TV

- When you turn the TV up loud enough to hear it over the HVAC fan, it is way too loud when the fan turns off. This makes watching TV a constant exercise of manually adjusting volume up or down every few minutes (worse on really hot and really cold days).

I want to sense when the HVAC fan kicks on and off, and automatically adjust the TV volume appropriately.

This will alleviate the physical burden being imposed upon my right thumb which currently has to move several times every hour to keep the volume at the correct levels.

1. The 24 VAC thermostat fan line connects to a rectifier and a transistor that control an input on an Arduino Nano.

2. An output on the Nano connects to a transistor that closes a button on the Adafruit TX(keyfob).

3. The Adafruit RX(pcb module) sends a pin high when the button on the TX is pressed.

4. The RX pin goes to an input on the Adafruit Trinket, which has two outputs controlling transistors that close volume up and down buttons. 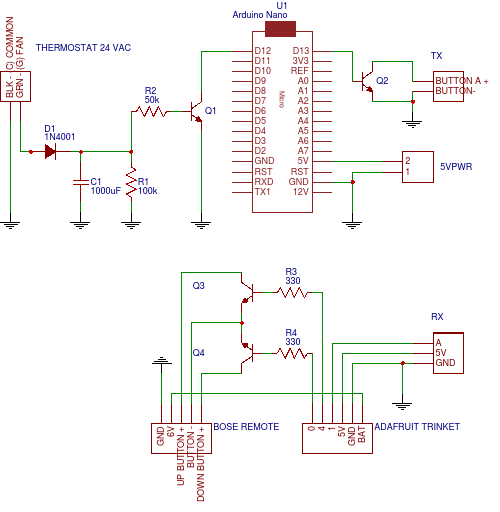 I saw your comment https://hackaday.io/project/34266-chewed-up-remote-repair/discussion-99377 on your other project page.

I got an idea about that, but maybe you already tried it and rejected it earlier:

@salec Thanks for the comment.  Actually the apparatus on the thermostat was powered by a USB cable plugged into an outlet.  I never tried to harvest power from the thermostat output or anything like that, was just trying to answer "is fan on or off" as you said.  This triggered a message being sent to the receiver I put in the remote control, the receiver then told a little arduino to pulse the volume buttons up or down a few times depending on the fan state.

The problem I ran into was putting the arduino (adafruit trinket) into a low enough power state.  I played with code and did a lot of googling but couldn't figure it out, it just drew 8mA no matter what which is too high for a remote control (I had to change the 4 AA batteries every 2 days).  This required me to put all of the remote circuitry on a hard switch rather than being able to leave it on all the time.

50$ ! What a rip-off! They made a remote which is not IR so that you couldn't replace it with one of many cheap universal programmable IR remotes.

I think they deserve to have their remote's PCB caged in a mains-supplied project box with a micro controller operating not just volume up and volume down, but each and every remote button, and the box should be placed near TV, accepting IR commands from an universal IR remote (or even better, one built by you, now that you know how to make enclosure, and can reuse their buttons on a new PCB of your design), as well as from your system for automatic volume adjustment.

I would love to switch to a universal remote and have all this in a project box.  That's not a half bad idea!  Who knows if I'll ever find the time to start that project though.

Building a Spot Welder for 18650 battery packs is an interesting and challenging adventure. How to over-engineer a spot welder.
Project Owner Contributor