Mormyrid fishes communicate by their electric organ discharge waveform timing. How does the fish do this?

Mormyrid fishes recognize the sex and species of other fishes by their electric organ discharge waveforms (EODs), particularly timing. These signals are encoded with microsecond precision by peripheral Knollenorgan electroreceptors ( KOs) which project to a dedicated time-coding pathway in the brainstem. One model proposes that stimulus-evoked spikes, originating in two different regions of the skin, will arrive at small cells in the anterior exterolateral nucleus (ELa) via both an excitatory input which is delayed and an inhibitory input with a shorter delay. Only stimuli with durations exceeding the conduction time of the axonal delay line (i.e., the excitation due to the pulse onset traverses the axonal delay before the inhibition due to the pulse offset arrives) will excite the ELa small cell (for example, cell 2 in figure ‘A’ with long duration stimuli). If all KOs are stimulated simultaneously, inhibitory inputs should arrive first, preventing the excitation of smal

This model has been tested by stimulating Brienomyrus brachyistius KOs with head-tail or transverse electric field geometries designed to stimulate receptors sequentially, and uniform geometry designed to stimulate them synchronously while recording in vivo evoked potentials from the posterior exterolateral nucleus (ELp), the sole recipient of ELa small cell output. Given that electric field strength was sufficient to drive “all” KOs, we predicted no evoked potentials in ELp under uniform geometry compared to a large evoked potential under head-tail and transverse geometry.

To interpret this experiment, a simulation of certain elements of the neural network was performed. The next sections outline the simulation and some results. 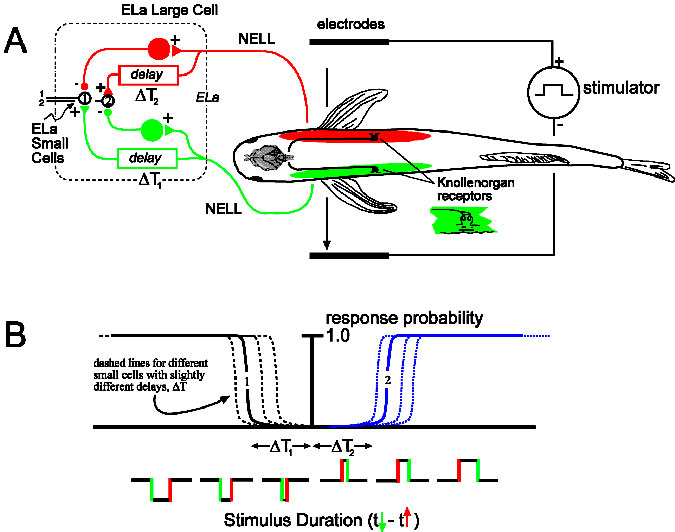 My second generation TDR which aims to be standalone (no oscilloscope) and as cheap as possible while being usable.
Project Owner Contributor

Measuring the "complexity" of various signals, such as bird song, ECG, a protein sequence or DNA.
Project Owner Contributor

"Complexity" of a time series