I did some current measurement of PICTIL rev2 compared to a original TIL311. As also seen in the table I powered both from 5V using the same breadboard circuit. The PICTIL was also much brighter (as far as the human eye is an instrument for that). Another point is that I do only have one original TIL311 (datacode: 9243 made in Korea) I do not know whether this one is typical for all. The used current range (300mA) was the lowest on my multimeter. The unit for the currents is mA. The last columns is the current of the original divided by the value of PICTIL. 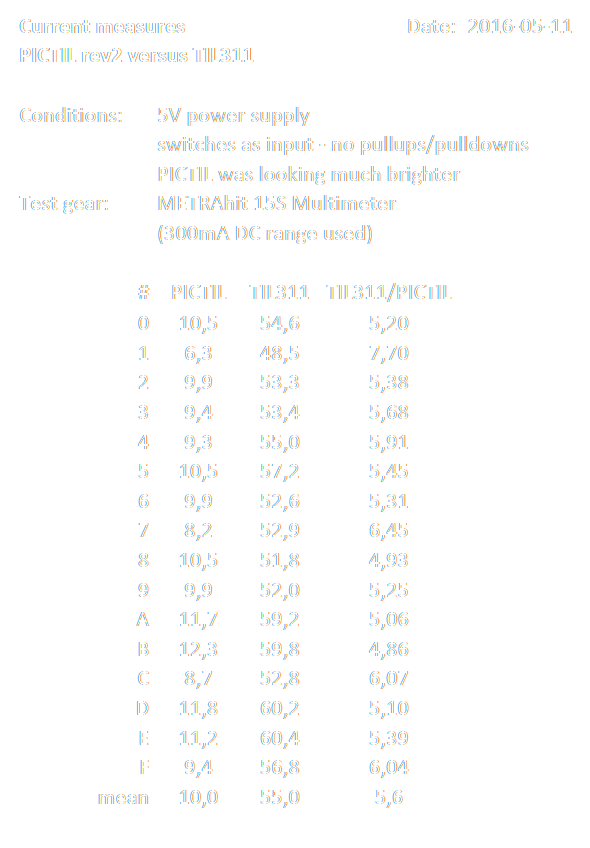 As you can see the PICTIL rev2 is much better than the TIL311 in terms of power consumption. On average the PICTIL consumes only 10mA! When dimming the PICTIL to archive the same brightness as the TIL311 the results should be even better.

Some added Note:
I repeated this measurement today with a other meter. According to the specs the Fluke 8040A is better. It has also a 20mA range, but this meter is much older and as far I know was never calibrated. (The METRAhit used before was last calibrated in December 2011). But never the less The measurements were very similar most times about 1,2mA higher for both PICTIL and TIL311.

I would have been very surprised if you didn't find these values :-)