Sixteen different LED colors on a teeny tiny board.

Joe and I recently wrapped up our #NeuroBytes grant so I got my hands on a spool of 34 AWG magnet wire and spent yesterday building a deconstructed blinktronicator: 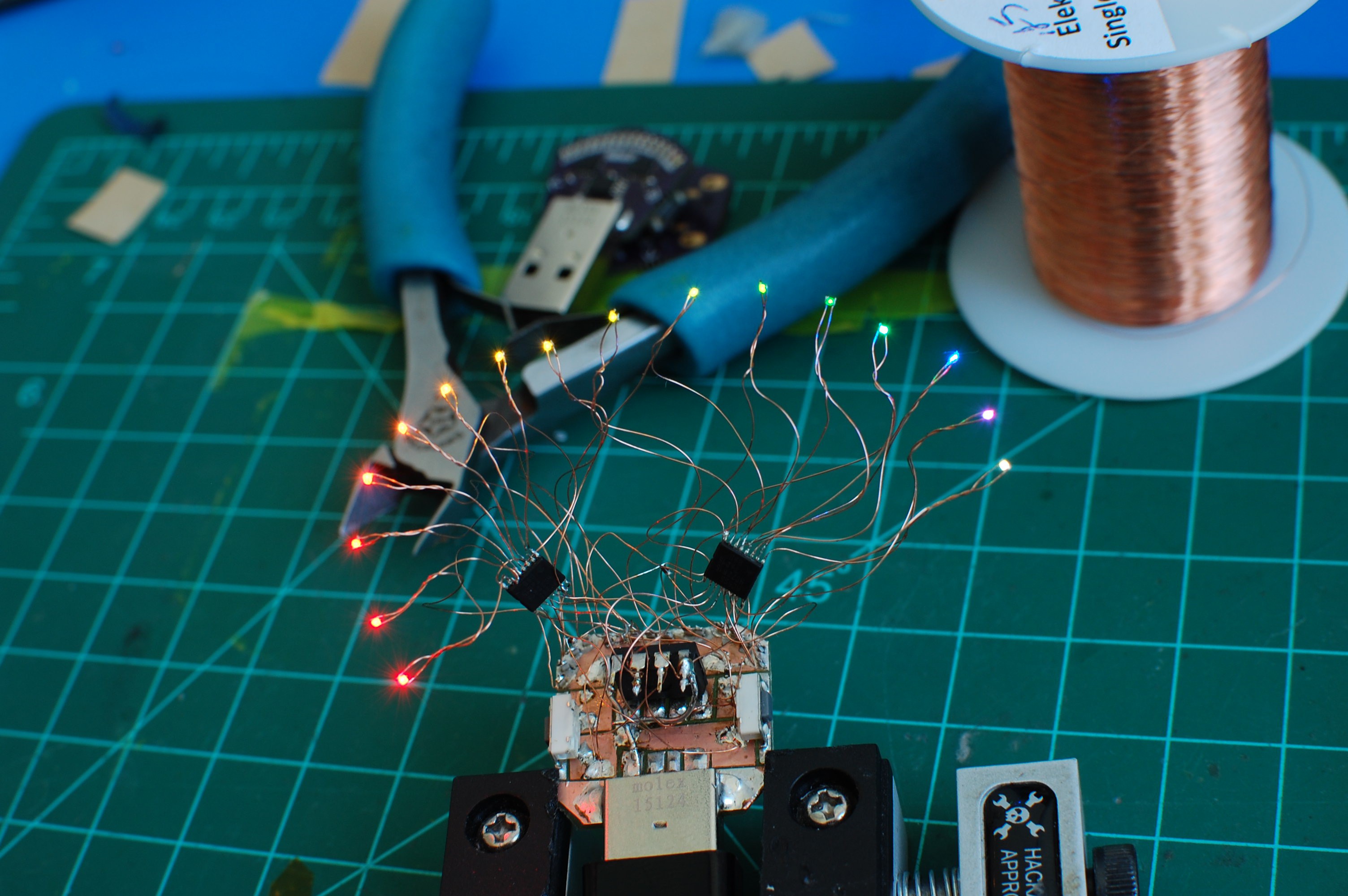 This exploration into the world of novelty soldering is without question the most tedious tangent I've ever embarked upon. I bumped the shift register package up one size since the 0.5mm-spaced DHVQFNs from the original were insanely hard to free-hand solder, but... to be honest, the 0.65mm-spaced TSSOPs shown above aren't any better, since one has to tack onto a teeny pin hanging out in space rather than a slightly teenier metal pad on the bottom of a chip. I also used a hilariously massive DIP ATtiny45 since I ran of the TSSOP models and thought it would look neat. 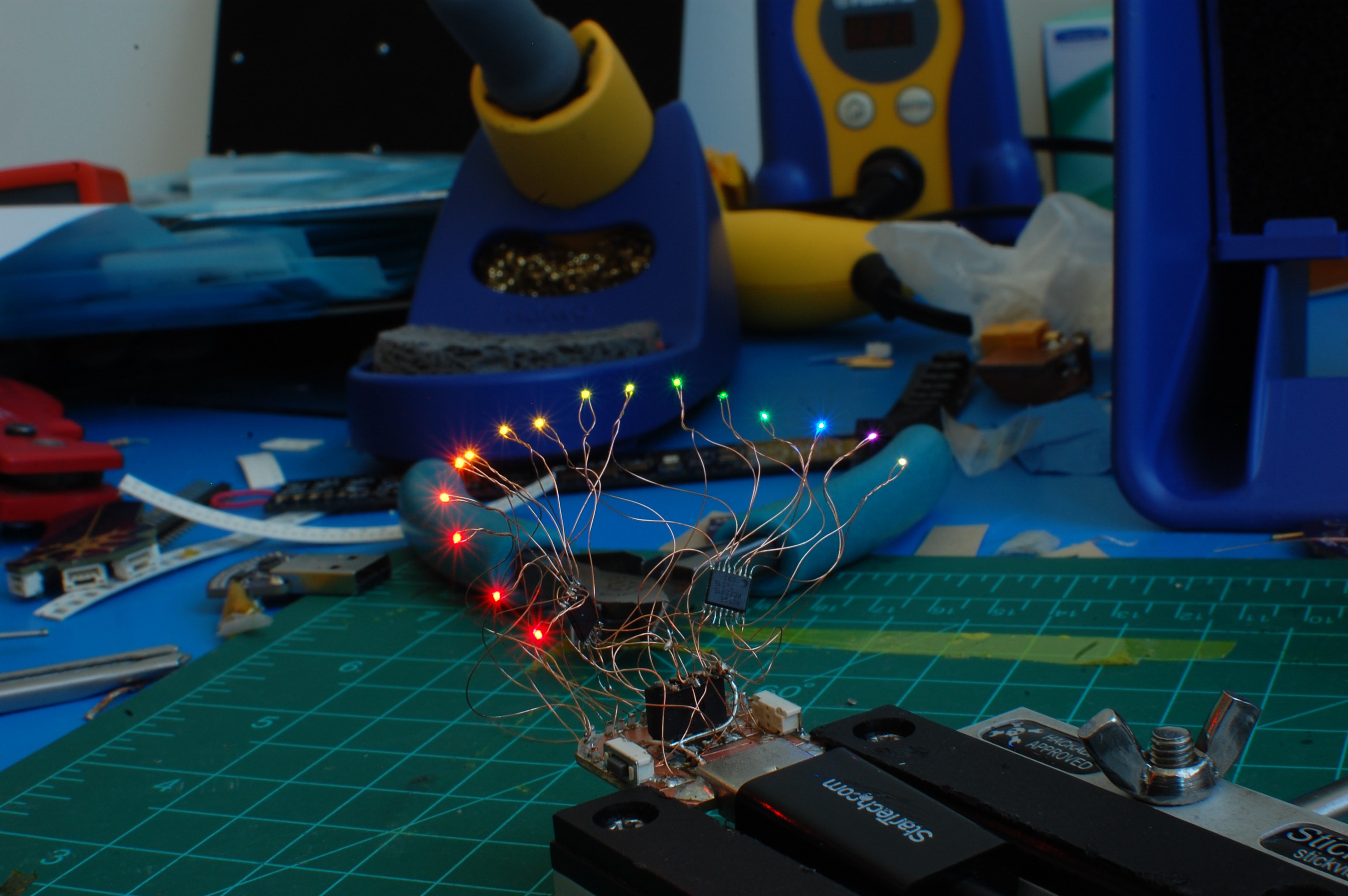 Electrically, this version is pretty much identical to the standard PCB other than the resistors; I decided to skip the bussed units for "ease of assembly". This also helps thermal performance a bit as the original 8-resistor networks dissipate around half a watt each when all the LEDs are on at full brightness, which is a tad over the per-element limit of 0.05 W. All the LEDs are rarely on at full brightness, but it's still something I should fix if I do another PCB iteration. Hence the graveyard of tombstones along the back of the rear of the board: The bypass capacitors for the two shift registers were fairly easy to add after dealing with the LEDs (at least 0402 ceramic capacitors aren't flat!), but I'm especially happy with how I decided to mount them: 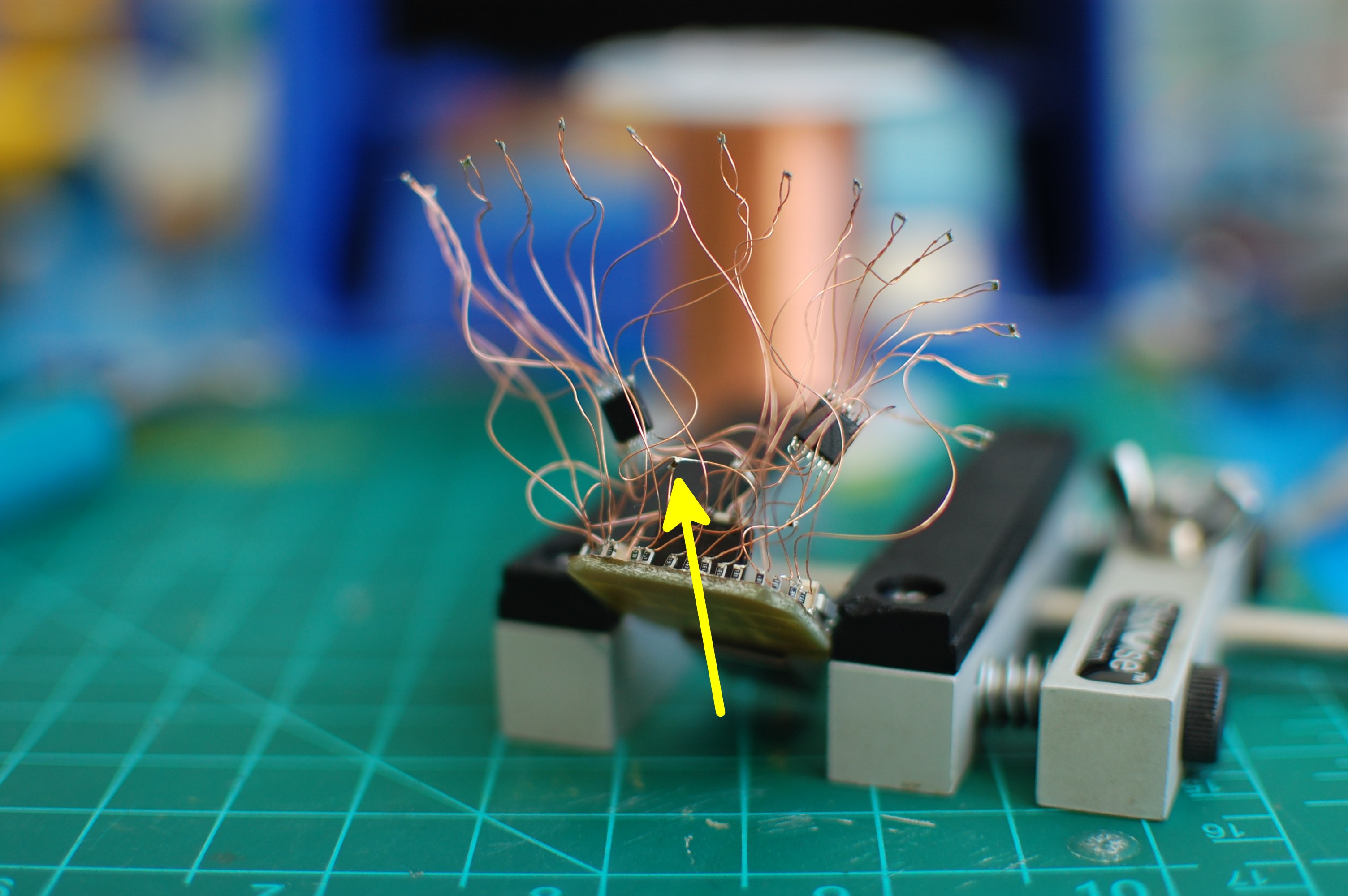 I should have programmed the ATtiny45 prior to attaching it to the copper clad but I forgot. This wasn't a huge deal as I ended up re-using most of the wires save the RESET line. And yes, all four modes work, although showing off 'pandering' mode really runs the risk of tearing the LEDs off the shift registers:

This creation will likely meet its untimely demise as soon as I accidentally crush it with a stray piece of paper (as the free-air portions are insanely delicate). Until then it stands as my best personal example of furthering the impracticality of an impractical project.

This is pretty slick, indeed.

Welcome to the world of hand-soldered 3D electronics :-P

Thanks! I'd love to see more of that world--any good resources you can point me to? I don't know the search terms.

one cool project is #Volumetric Circuits!

Ah I haven't looked at that one in six months, the latest update is awesome.