A project to design and build a tiny useful bat detector and to spread appreciation for these amazing creatures.

This project actually breaks two world records; as of this writing it is the world’s smallest bat detector and it is also the world’s simplest bat detector.* There are only four main components; a battery, a microphone, an amplifier and the LEDs. The microphone works into the ultrasonic range and feeds into the amplifier which rolls off the lower voice level frequencies and amplifies the higher frequencies. The LEDs just display the output of the amplifier. What could be simpler?

A major benefit of this project is that it is a building block for more advanced bat detection projects. I'll discuss that more in a future discussion below.

*For those fun loving grammar folks out there I should probably say it is the world’s smallest and simplest detector of bats. This does not measure the size of bats nor does it test their intelligence. 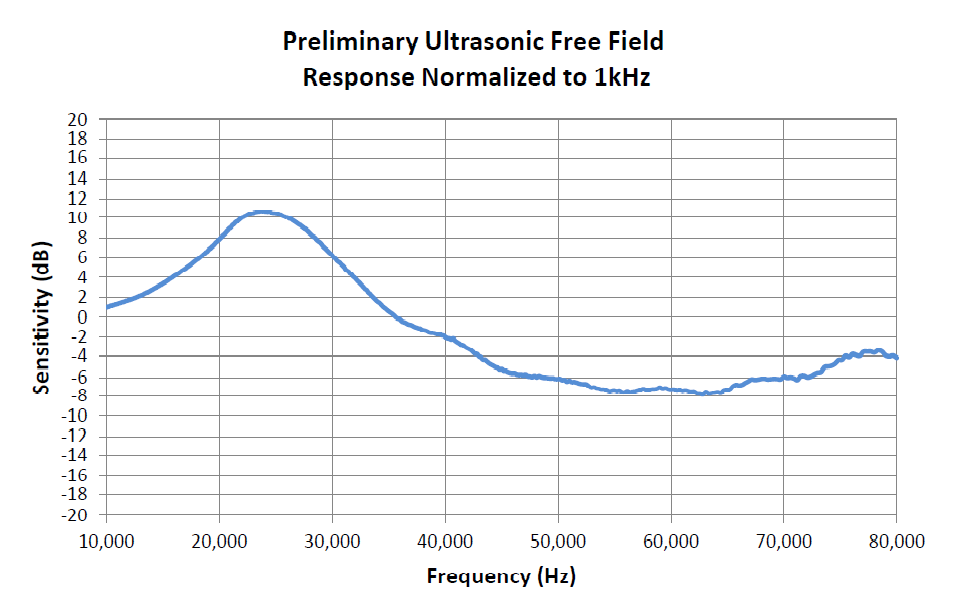 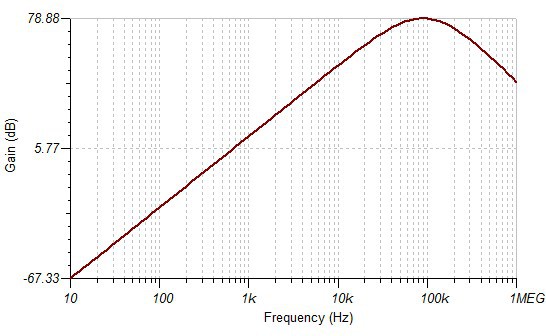 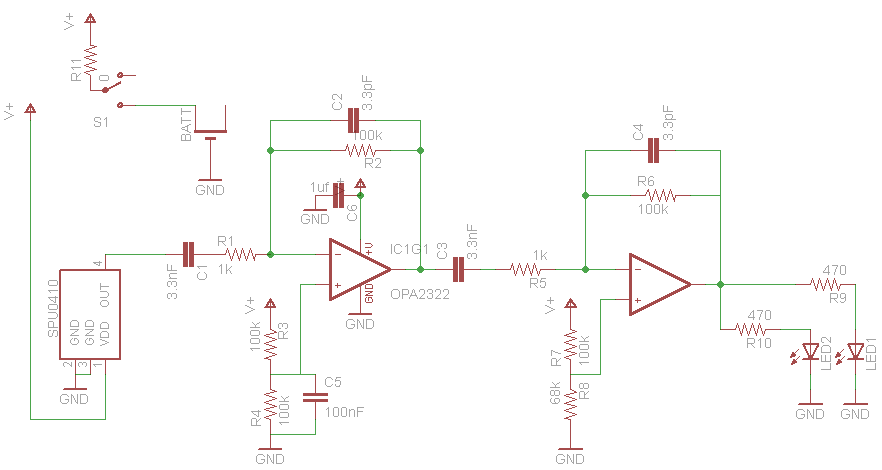 I was expecting for it to yell "BAT!" whenever it detected one.

Ordered parts and PCBs for several of these tonight.  I plan to give some of them to friends as gifts.  Thanks for the inspirational project!

Made a couple of these now  (had a few failures due to bad soldering on my part). Just wondering if you or anyone has a breakout for the microphone SPU0410HR5H-PB.

I've got a sparkfun Op amp breakout LMV358 I'd like to hook up to. Spambake do you want to get in touch dlip@hotmail.co.uk

Made it, works great ! One thing the high pass is a little low could do with it being about 15khz. Its too fidily for me to test different caps. Can you or any one recommend what to do to cut out frequencies below 15khz.

Please do some more hacks,  If I can follow and do them anyone can.

I’m more of a fiddler than a filter wiz so I don’t have a precise answer for you.  Maybe someone else does.  I selected the values partly by fiddling.

C1 and C3 roll off the lower frequencies so you could try replacing one of those with a 1nF capacitor.  If it seems to help but you need a little more you could replace both.  Reduce the capacitance further if you need more roll off.

Two things to keep in mind:

1.) This filtering is crude as you can see from the simulation chart.  Part of the idea was to roughly even out the response of the microphone.  Reducing the capacitance shifts the response to the right on the chart so it also has the same effect of reducing the response on higher frequencies.  It's all a matter of trade offs.


2.)  Many things produce ultrasonics that we are not aware of.  Rustling clothes, jangling keys, clinking silverware and glassware, rubbing fingertips, usb chargers and power supplies, TVs, monitors, computers, etc.  If people are around and doing the usual rustling and clanking the detector will pick it up.  Tell them to Namaste tf out.

Anyway, have fun and enjoy bats; they are pretty cool.  Have a look at Hystrix’s bat detection pages as noted in the Resources section of the project details for lots more ideas.  I am working on similar things but it is far more fiddly than this and therefore very hard to document.

Wonderful project! I love listening/watching the bats fly around our house in the summer.

They are amazing animals once you take a closer look at them.  I attach my tiny bat detector to my larger ones with a little blue tack to add a visual cue to what they are doing.  It is as sensitive as any of my other detectors.

Wait, seeing the picture now - does that mean you're building a detector for the world's smallest bats? ;)

It will definitely detect the worlds smallest bats.  Not so sure about the worlds largest bats.  Thanks for the great first post!

The 2017 Hackaday Prize
Modern security and cryptography call for a source of true-random numbers. This design creates them from thermal noise in a resistor.
Project Owner Contributor