For my second battlebot, I wanted to build a vertical spinner. I figured that using 1/4" polycarbonate sideplates on a 3D printed body would be nice and durable. This was a good idea. I figured a spinning weapon made from a cutting board (UHMW PE) would be nice too. This was a less good idea; UHMW is durable but soft... I later upgraded to a weapon of 1/2" polycarbonate with a big tooth.

During its first competition, the bot was extremely durable and reliable, except that it was fairly easy to tip on its side.

Big Tooth got to the championship match in its second competition, being very reliable.

The design basis was a 'vertical spinner' that could be flipped over and still fully function. This led to a fun-to-CAD design with lots of symmetry.

The process of building the jig, and drilling/bending/cutting the sideplates was extremely time intensive, probably about 15 hours of work. But it makes for a repeatable build. I even 3D printed a piece to verify the bends as well (an extruded offset of the model that matched the curvature), and used this to make some corrections.

The robot is not autonomous. Ain't nobody got time for that in this league... Instead, I use WebbotLib to program the Pololu AStar32 Micro MCU (Uses Atmega 32U4). This in turn communicates via XBees with my Arbotix Commander. It sends PWM to a brushless motor controller (which is also provides a 5V voltage regulator) and a Pololu dual motor driver for the drive motors. I was barely able to fit the electronics into the chassis, and ended up not having a switch, so battery has to be manually disconnected. 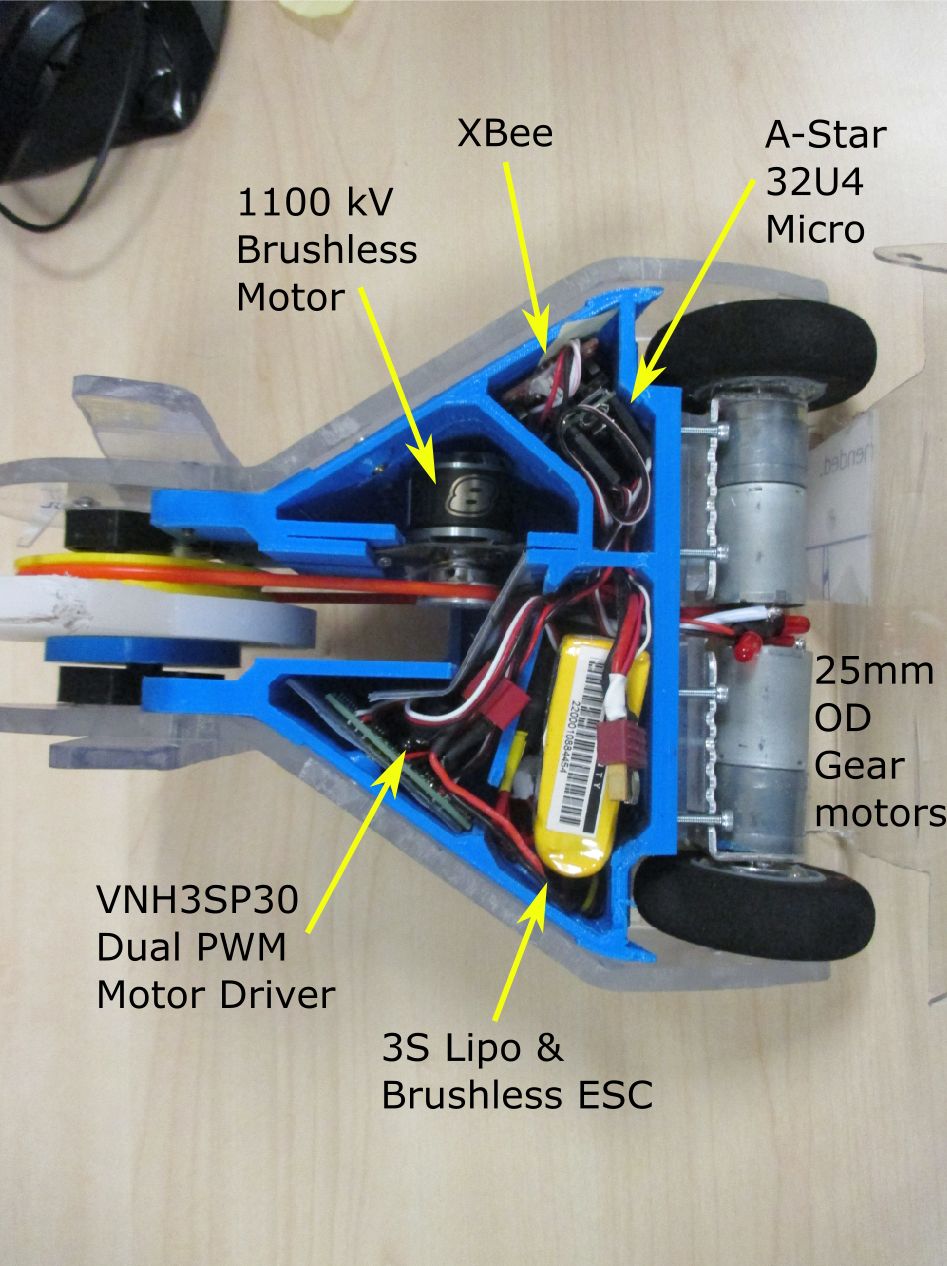 Between the first two competitions, changes were the addition of side guards to reduce tippiness, replacing the weapon with a polycarbonate one, and better wheel hubs.

For the third competition, I added: (1) a pulley guard to the weapon's pulley to avoid the belt jumping off the pulley; (2) rubber bands super-glued to the foam wheels; (3) 3/16" guards around the back of the wheels. The robot's demise was another vertical spinner that dented one of the drive motors and apparently broke the connection between motor and gearbox on the other drive motor. This damage was done through the 0.3" Polycarbonat shell that covered these parts.

I initially started out with smaller wheels, but replaced these in the middle of the first competition. This ends up exposing the wheels to potential damage, but gave me much better driveability.

The weapon has a steel 3/8" keyed shaft that spins in two bearings, and is nicely balanced and shimmed for minimal friction. I 3D printed the large pulley for the weapon in two pieces which snap together.

Unfortunately, I managed to delete most of my latest CAD files, so replacing any broken parts will be tricky. I anticipate starting a new design for the next competition.

This robot can juggle 7 balls and various juggling patterns by rolling balls on an inclined surface.
Project Owner Contributor

An adventure of six students who push to compete the best universities sacrificing every waking hour of their vacations.
Project Owner Contributor