Definitely a hack-job, but now I can drill-press holes up to and exceeding 1/2in!

Using stuff in my collection, nothing purchased!

A few interesting techniques and whatnots learnt during this process:

Some bolts are self-tapping (!?)... Awesome. Look for cut-out flutes and a tapered-end.

Computer slot-covers are quite handy little strips of metal... They come in various materials, some more malleable than others, some aluminum, others with ridges for structural-purposes.

I needed to attach roller-wheels to the particle-board surface, as, otherwise, the drill could rotate with the rack(/pinion). The original rotary-tool mount had a bracket with an upright thing that prevented too much rotation (but quite a lot was still allowed). That upright thing had to be removed for this attachment.

Because only one bolt is used to hold the wheel-mount, and because the bracket lost some width due to wrapping around the rack, the bracket flexes a bit at the distant-side. So I added the upright "band", as seen here, for some added-support 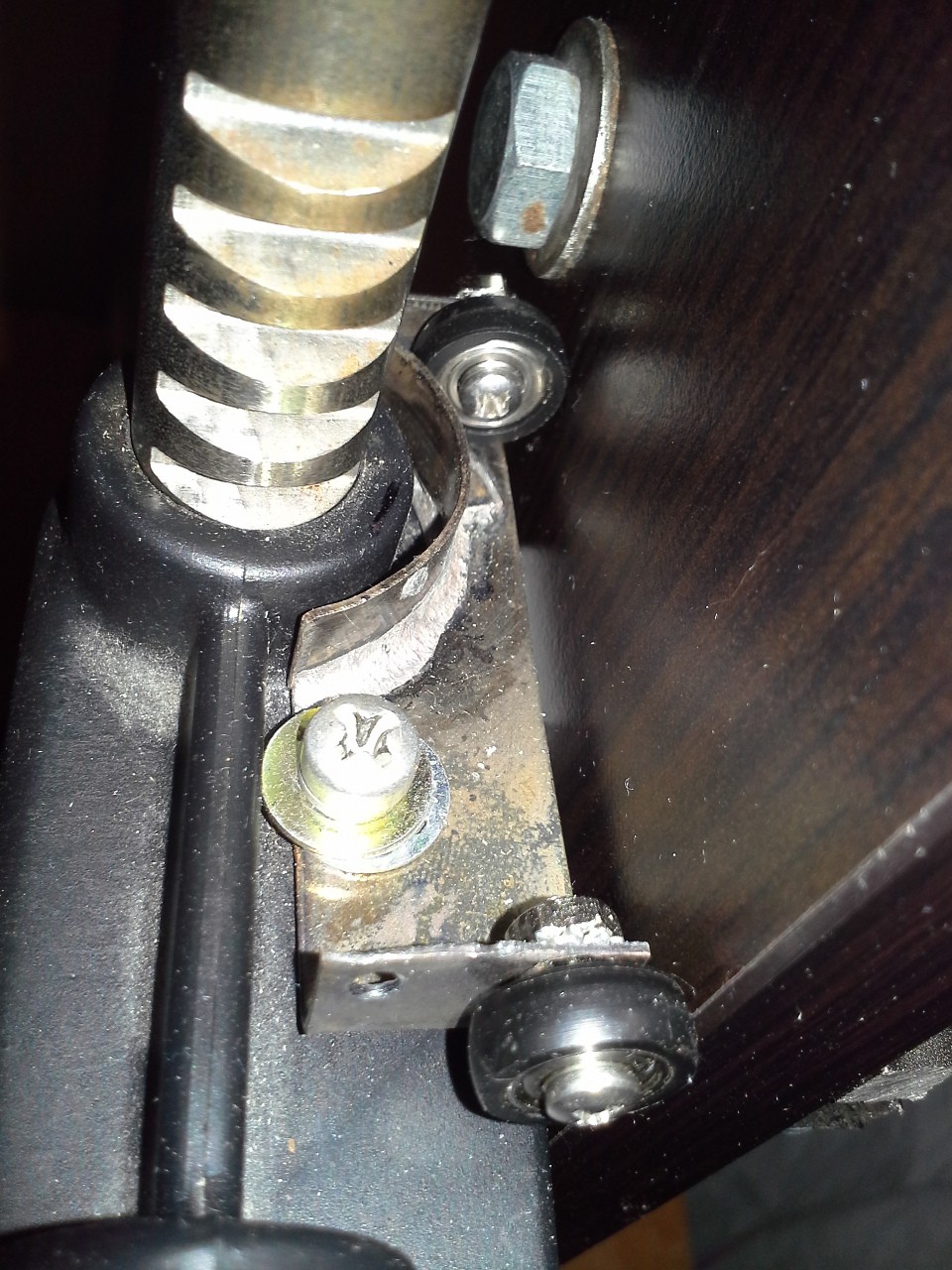 Doing-so was interesting... I don't have a welder. So I set my soldering iron to its highest setting which was just enough to run a hefty bead on each edge. Wasn't sure what I was going to do to melt those two beads together, though. It was difficult to heat both materials with the bead separating them from their resting-position. Then it hit me... I wanted to "reflow" the solder-beads together, right? And how do most 1337 Haxorz reflow [PCBs]? In the oven!

Well, I don't want all those fumes lining my oven, and I just happen to have acquired a whole bunch of pots and pans, more than I could ever cook with. So I set it in a stainless-steel pot, didn't even bother trying to clamp 'em. Covered with a bit of aluminium-foile, and turned the stove-burner on high. A bit later there was quite a bit of smoke (definitely open the windows and use a fan for something like this!). A bit later the smoke had dissipated... about 20 minutes in I checked it and much to my surprise the thing aligned itself quite nicely and made a beautiful fillet.

This particular bracket still flexes a little bit at the far-wheel, but it's certainly better and the rotation is on-par with the amount the rotary-tool setup had... It could probably be improved, still.

The bottom of the mount is attached to the "rack's" bolt via plain ol' L-bracket, where the original rotary-tool mount was bolted.

The top was a bit more difficult. I found an L-shaped bolt-clamp thing originally used to clamp a lamp to a desk-top. Did some bending so it'd grab the "rack". Actually tried two different bends before deciding a straight-up U is obviously the right choice. Well, it's almost a U.

The spacer is three pieces, a bolt and a nut, and the third plastic piece was from an old stroller I scrapped years ago. It's hard to describe at the moment... The bolt-head is just clamped against the surface (no drilling necessary), and the nut makes it adjustable to get everything as square as possible. 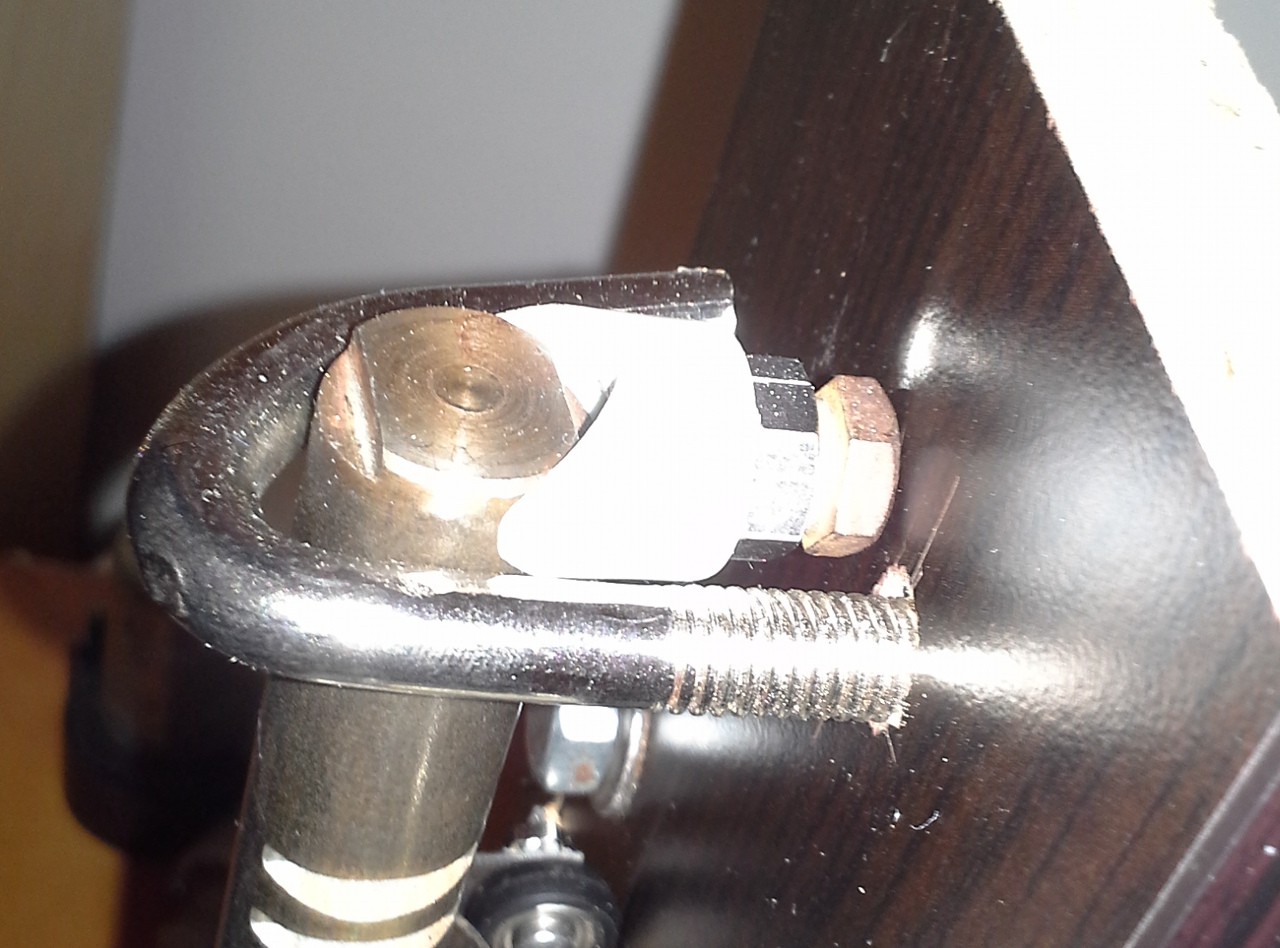 The right-angle drill-attachment had a wooden handle that was held in with a single bolt. I unscrewed the handle and used that bolt-point to attach it to the plywood. But it wasn't difficult to rotate the whole attachment around that bolt. But there's a flat surface. I used two pieces of steel(?) cut from a square-shaft originally used to drive the paper-feed grippers in an old dot-matrix printer. I also had a similar piece of aluminum, but didn't want it to flex too much. 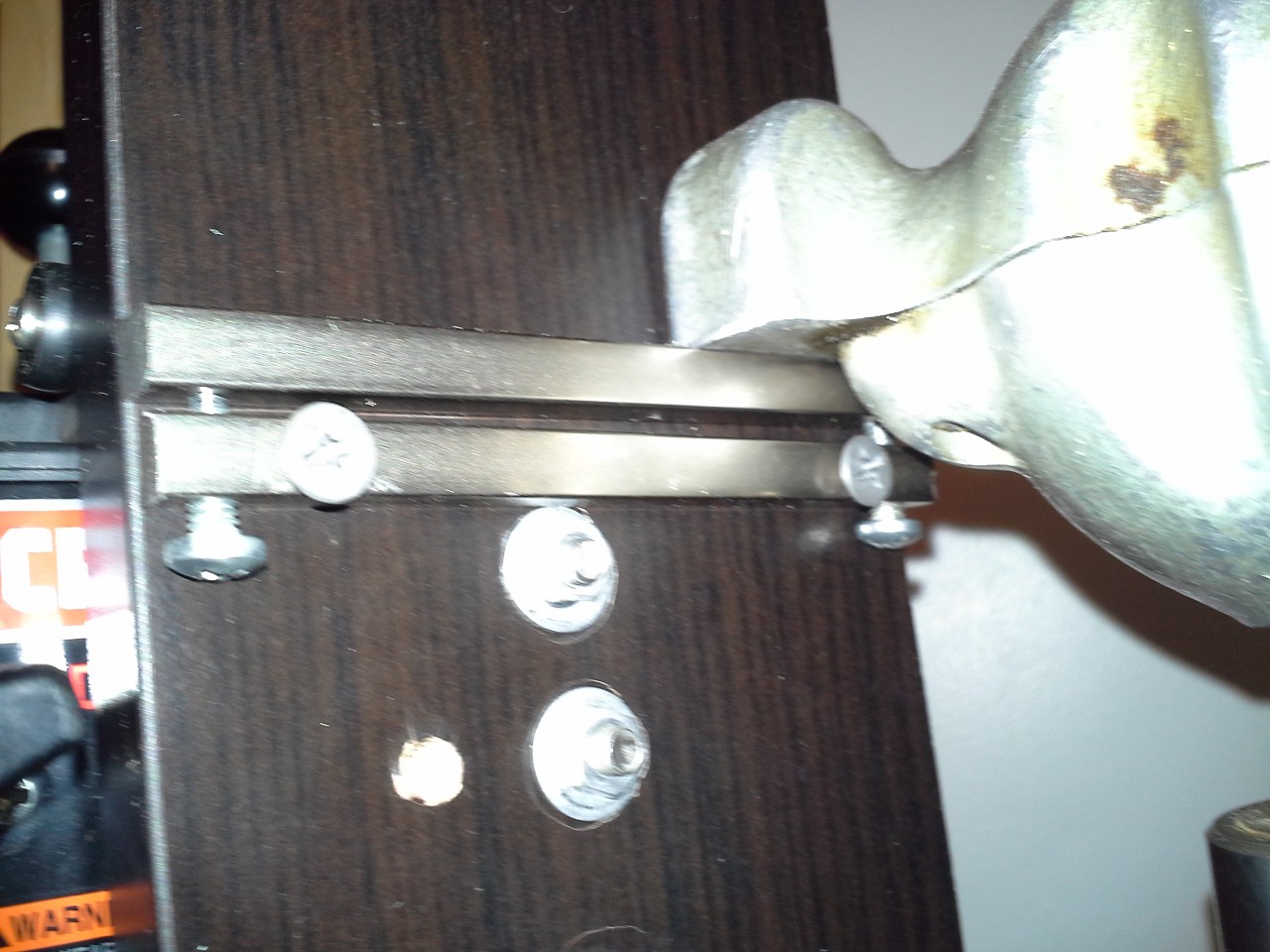 I planned on using 6-32 bolts for fine-adjustment, but couldn't wrap my head around the necessity for cutting-fluid (and the expected mess)... and, suffice-to-say, I got the tap all the way through the first hole (but not fully-threaded) before the tap broke. Thankfully there was enough of the tap remaining to grab-hold of for removal.

So I went up a size and used vegetable-oil as cutting-fluid and, of course, it was a *much* smoother process. (In case you're like me, and need to know "why" before being convinced "that"... my theory is that the "cutting" fluid doesn't actually aid in *cutting* at all,...

Nice! Makes me think of doing a drill-press to rotary-tool-drill-press conversion, just because. XD

This was a one day build, because I have a 5 year backlog of paper for destroying, and my shredder is broken.
Project Owner Contributor

The Destroyer (of confidential paperwork)

Sick of having the mailbox ran over by the snowplows, I built one that rotates
Project Owner Contributor

2021 Hackaday Prize
Getting a little exercise during the daily grind.
Project Owner Contributor