For 2015 HITCON CTF(http://ctf.hitcon.org/) contest we decided to present something special for the hacker teams - a Star Wars-themed lightsaber score board!

The CTF contest involves each team attacking each other to "capture the flag" through system exploits. Since the theme this year is HITCON Wars we thought it would be cool to use lightsabers to indicate the attacks and point captures of each team.

To achieve this we make a lightsaber stand that is connected to the contest scoreboard server, and dock the lightsaber to the stand. Inside the stand we use a MediaTek LinkIt Smart 7688 board which runs OpenWRT Linux to receive updates from the scoreboard. When a point is captured, the stand changes the length of the lightsaber beam length and plays an attacking sound effect. 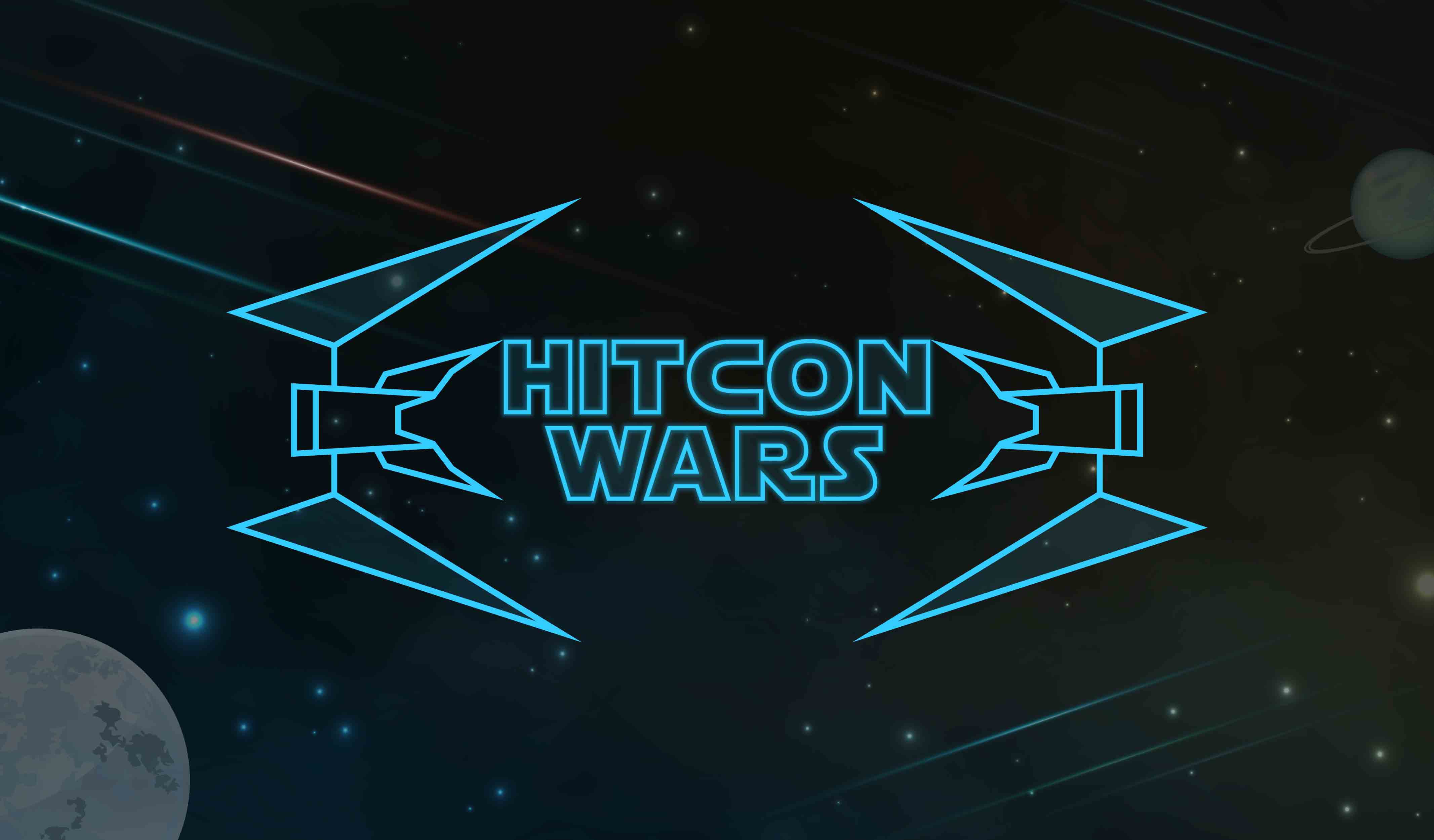 We want to create a cool scoreboard for 2015 HITCON CTF contest.

CTF (Capture the Flag) is a computer security competition. CTF contests are usually designed to serve as an educational exercise to give participants experience in securing a machine, as well as conducting and reacting to the sort of attacks found in the real world. Reverse-engineering, network sniffing, protocol analysis, system administration, programming, and cryptanalysis are all skills which have been required by prior CTF contests at DEF CON. There are two main styles of capture the flag competitions: attack/defense and jeopardy. We want a lightsaber themed scoreboard because it would be cool :)

For each team, a lightsaber is docked to a lightsaber stand. The stand consists of a LinkIt Smart 7688 WiFi/Ethernet development board which receives score updates from the HITCON CTF scoreboard server through Ethernet, as shown in the diagram below: 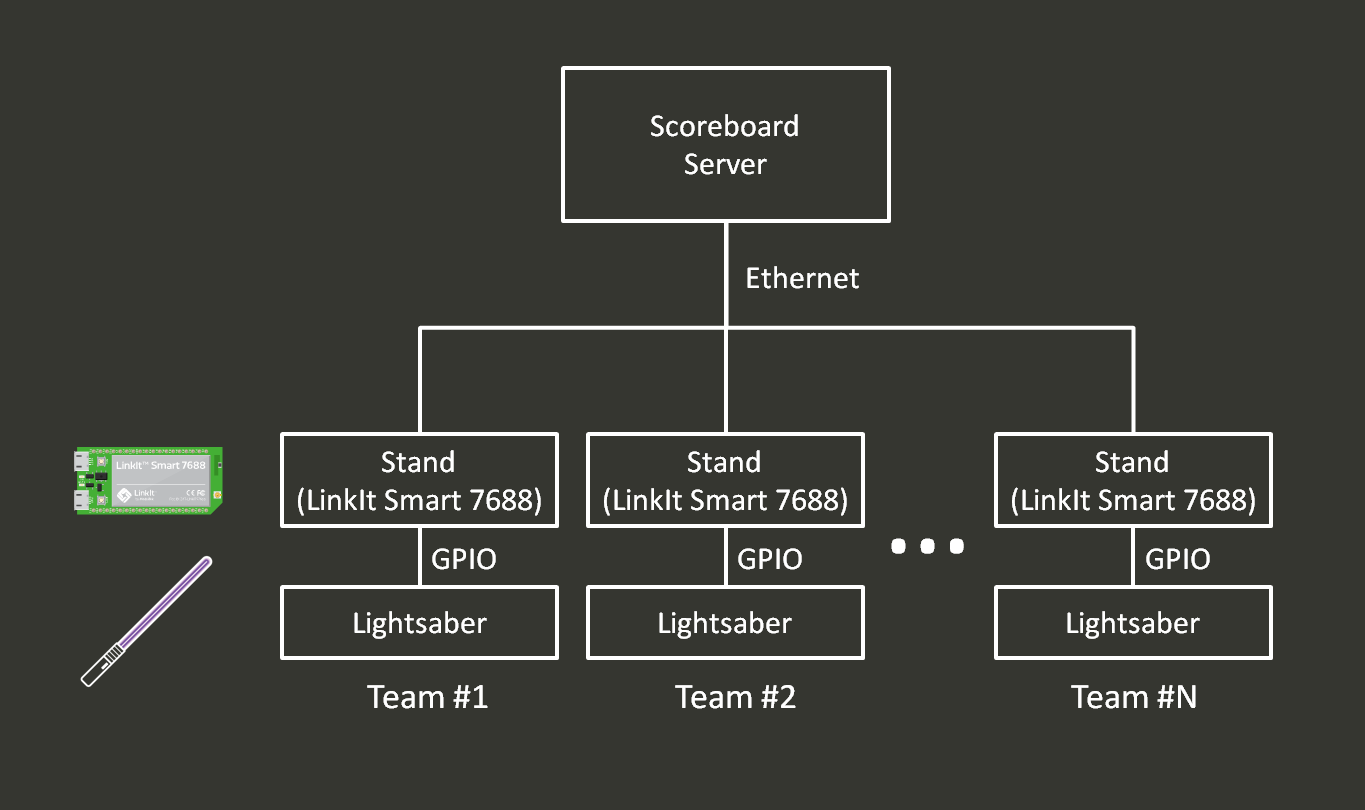 The stand listens to the updates from the server, changes the length of the lightsaber blade, and plays sound effect, as shown in the video.

So there are 3 major components in this scoreboard system,

We now go through each components one by one.

We want the teams joining the CTF contest can take lightsabers back home after the contest, so instead of building our lightsabers from scratch we decided to mod the light sabers built by Makoto Tsai, a well-known lightsaber smith in Taiwan. He was kindly enough to helping us modding several lightsabers with an external interface that allows external control of the LEDs inside the blade.

The blade in Makoto's lightsaber design consists of 6 sets of LED chains, each containing 10 pcs of LED. The blade LED chains looks like this: 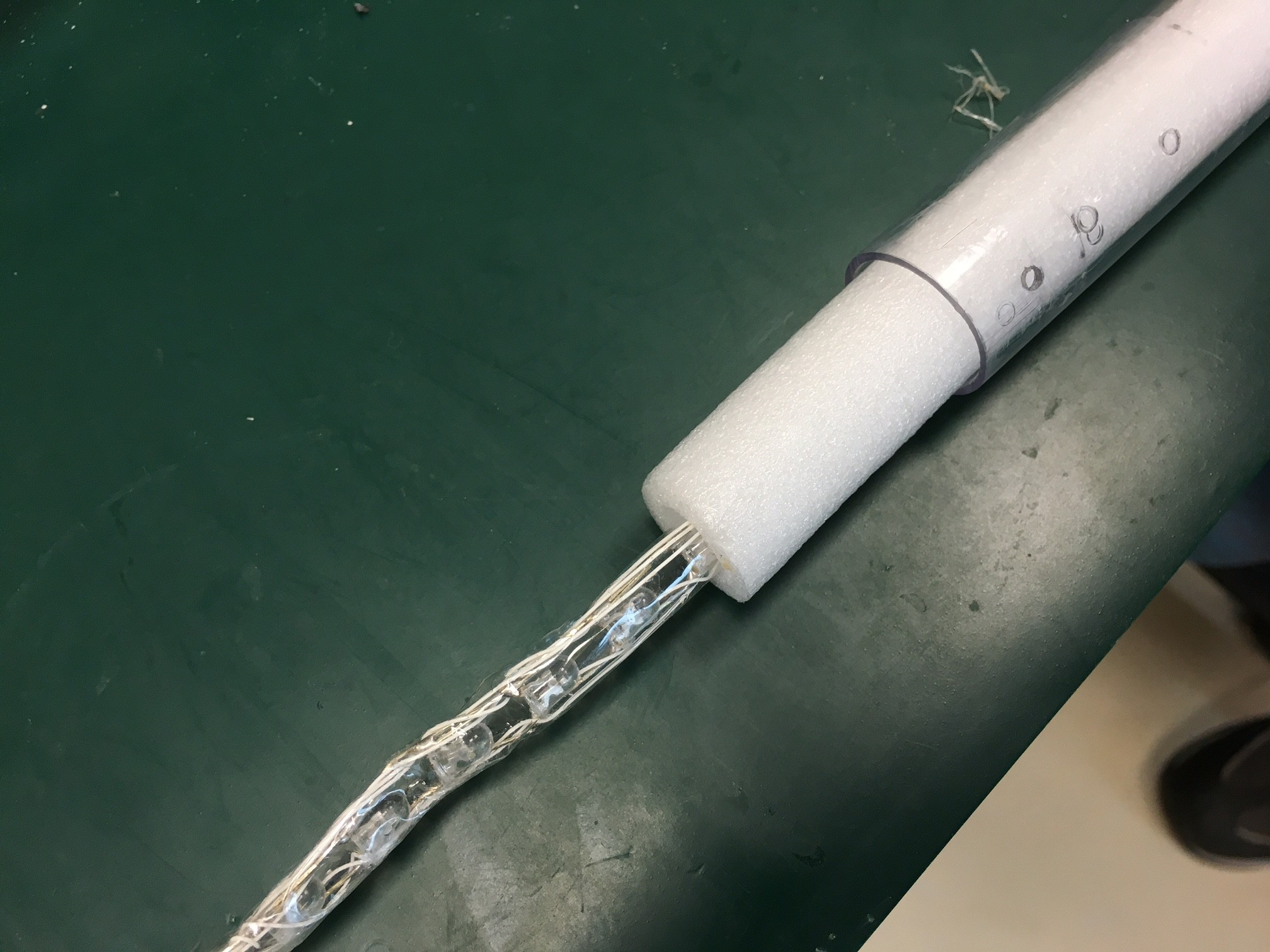 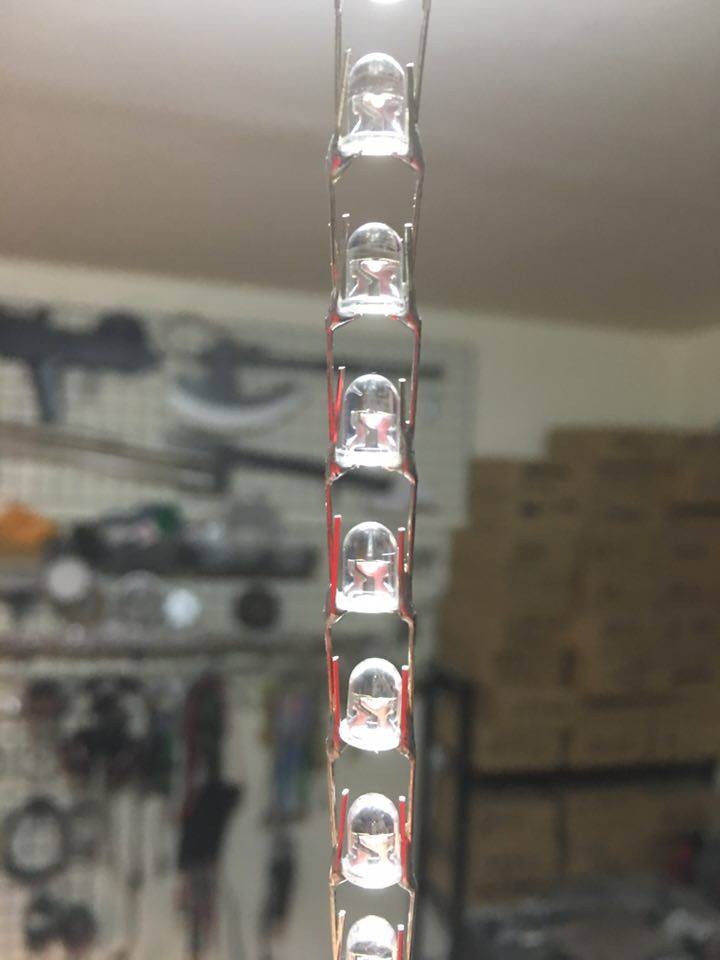 When it's not docked to the stand, it's controlled by the board inside the hilt, as shown below (translated from Makoto's article here): 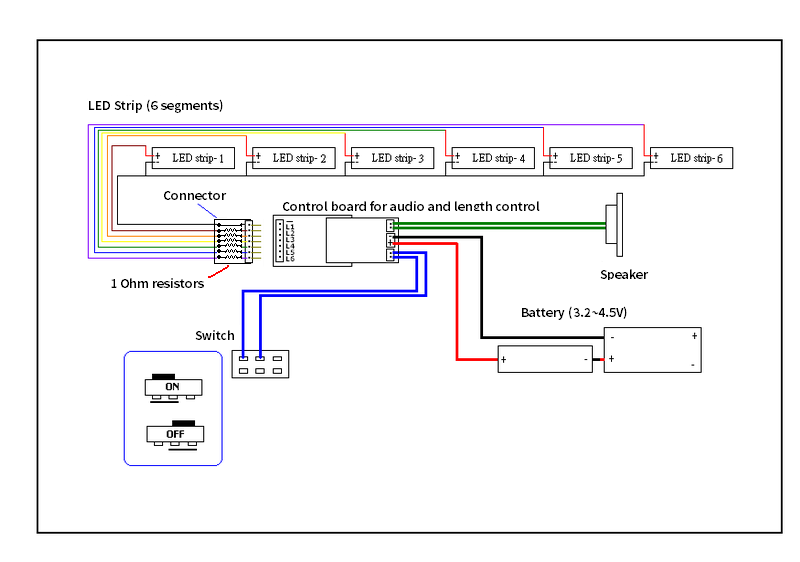 Once the lightsaber is docked to the stand, external control takes control over the LEDs inside the blade part. The control protocol is straightforward: 6 GPIO pins controls the 6 segments of the lightsaber blade, amped by 6 PNP transistors, and shares a common GND. So what we need is to breakout the connection between the LED strips to the control board inside the hilt. This way, the length of the blade can be controlled through external circuits, and the lightsaber keeps its original functionality. 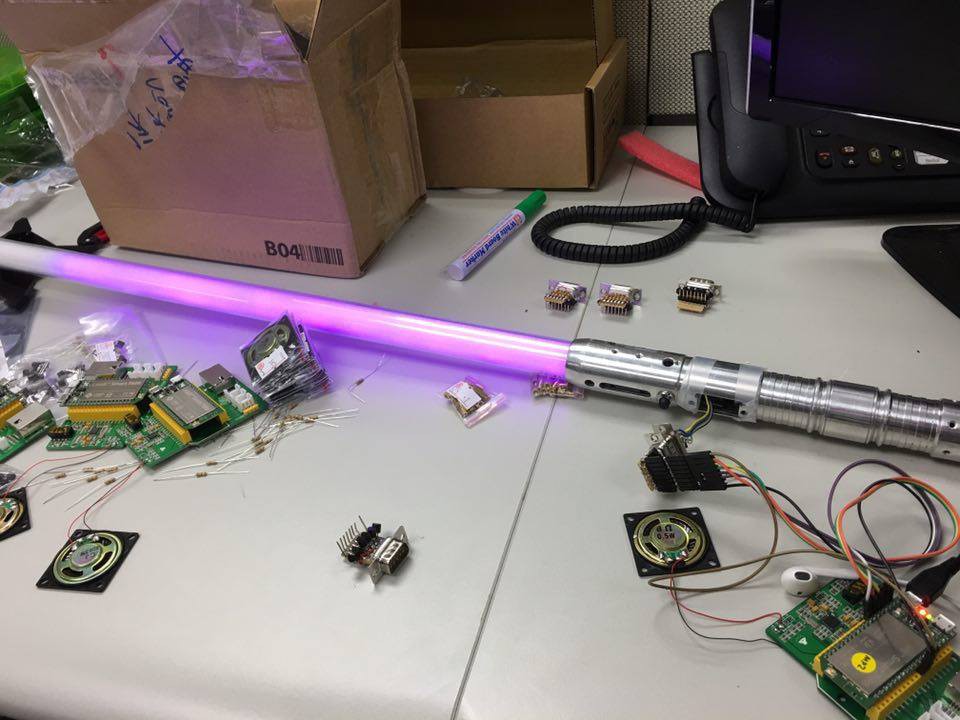 The D-Sub connector after inserting into the hilt. The hilt is cut and modded by Makoto. 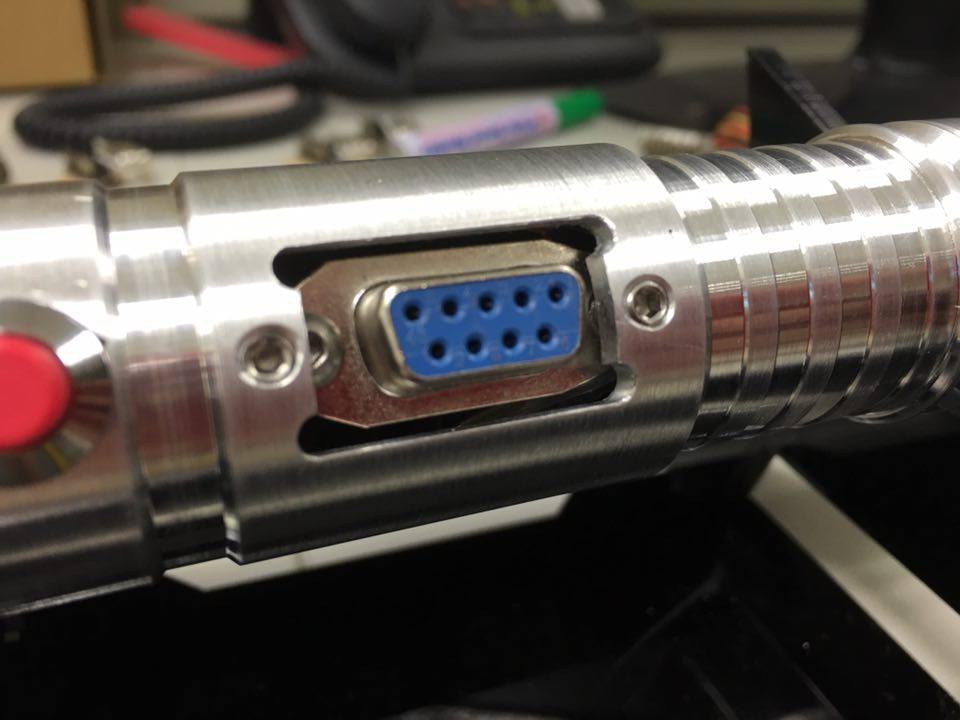 So this is how we mod the lightsaber - thanks to the wonderful lightsaber from Makoto!

Now we proceed to the design of the saber stand.

The stand is the central component in our design. Inside the lightsaber stand is a MediaTek LinkIt Smart 7688 development board that runs OpenWrt Linux and a Seeed Studio breakout board with Ethernet port and I2S audio output. The board is probably the cheapest headless Wi-Fi/Ethernet Linux development board that we can buy now - just $12.9 USD each. The board connects to the scoreboard server through ethernet, and connects to the lightsaber through the D-Sub connector. So there are 2 major HW component: the lightsaber blade controller, and the speaker for playing audio effects. An overview diagram is show below: 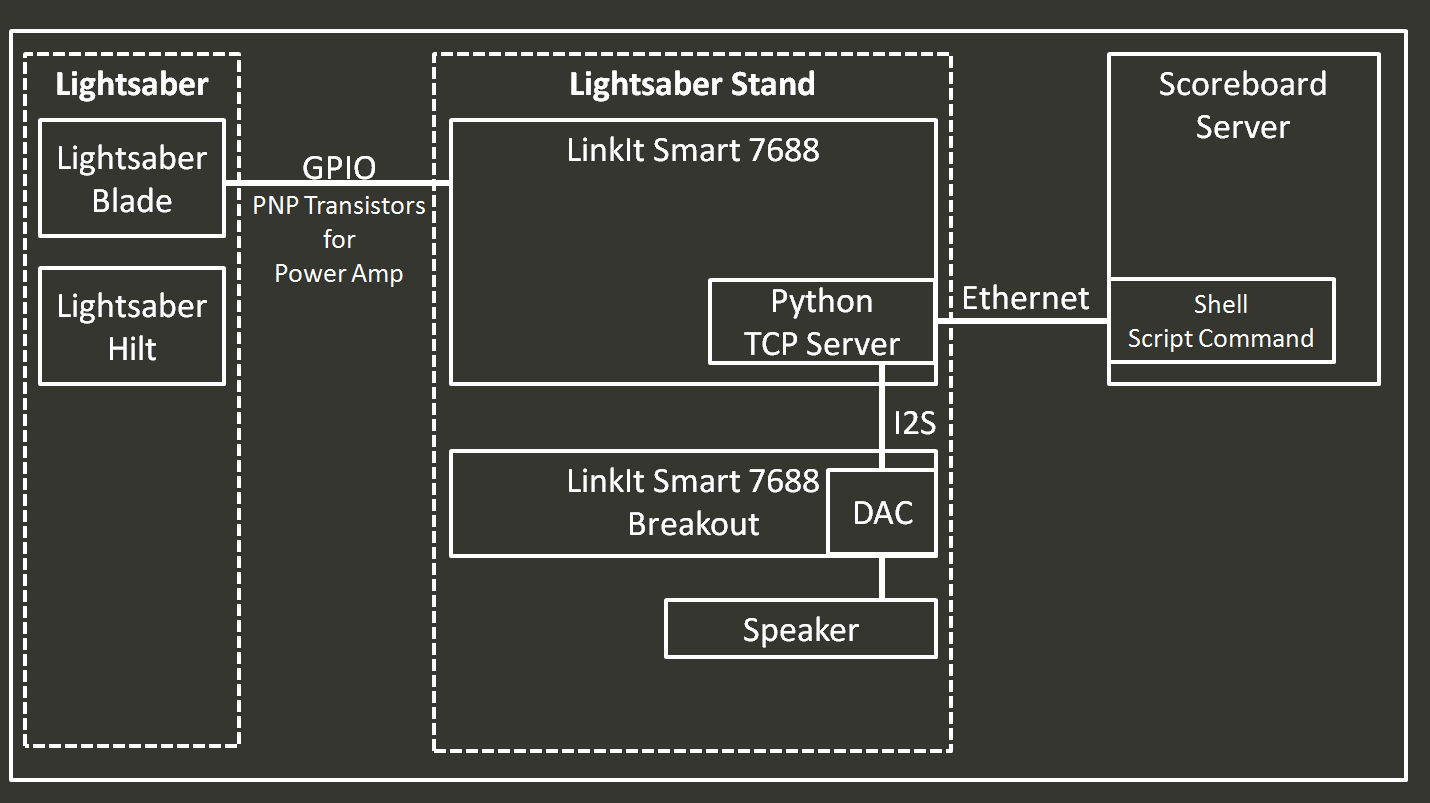 So we need to construct the connector to the lightsaber, and connecting the server through ethernet and plays audio. We use a convenient breakout board from Seeed Studio that has Ethernet port, Audio DAC and GPIO breakouts. We now go through the construction of the connector,...

Yet another Quadrocopter - built from scratch. Running on a STM32 evaluation board.
Project Owner Contributor