V0.2 of the board was committed to Github at Thu Dec 31 23:59:11 2015 -0600. This has some of the routing suggestions from the comments, moves the antenna out past the board edge, fixes the LDO tab short to ground, and removes the HAT EEPROM. 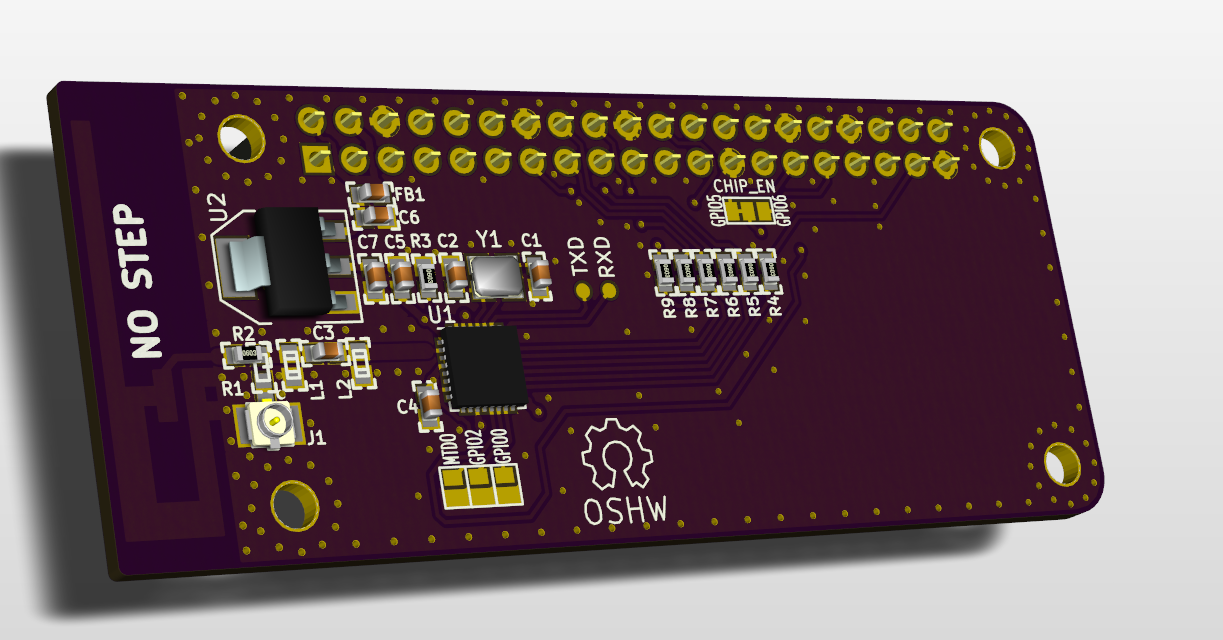 As long as SDIO is enabled in config.txt, the ESP8266 properly enumerates on the bus and the correct driver is loaded. The expansion header is not much fun if it's only being used for WiFi, and HATs are not allowed to be stackable. So I removed the EEPROM.

That does mean I can't call this a HAT. So I'm looking for a good name that doesn't use "HAT". Any ideas?

Meanwhile: I reflowed a second board, this time in the toaster. It came out better than the first, and fired up on the first try. The only issue was that the OSH Park white silkscreen turned a bit more yellow than the first hot air hand reflowed board.

Edit: Argh! Some last minute rerouting of the 3.3V behind the chip broke the ground plane under the LNA antenna pin. Probably not going to make a ton of difference, but I haven't sent anything off to manufacture yet.

Edit2: Fixed. I also discovered a no-connect in the RF path, where the DRC error was legit and not due to the antenna weirdness. I added a cut-and-jumper block to change the CH_PD GPIO from GPIO5 to GPIO6 or disconnect CHIP_EN from GPIOs altogether. Finally I redid the solder jumper parts so that there's no paste on top. I'm still holding off on ordering in case I find something else wrong. OSH Park isn't going to be doing anything 'til Monday anyway.

Hmm, so since this project is related to receiving remote signals and ESP is involved, how about calling it TIN or TINFOIL? :)

Some vendors are calling small zero hats without the eeprom "pHAT" E.g https://shop.pimoroni.com/products/phat-dac

I considered "pHAT" but it seems that Pimoroni is the only reseller using the name.  I still don't have plans to go into production but I don't want to step on their toes either.

I'm hesitant to get near the name "HAT" anyway.  There are also a lot of HAT spec violations that even the pHAT doesn't do, like grounded plating over the standoff holes (needed to keep the groundplane continuous near the antenna), exceeding the outline of the Pi, and of course ditching the EEPROM.

WiFi Toupee?  Raspberry Meringue?  WiFiPiPants?  This is why I'm not in marketing.

Thank you for all your advice!  I hope this one will perform even better with the more proper waveguide and grounding.