I haven't progressed much lately but I have encountered several use cases for the DYPLED module :-)

I recently found this circuit on the web :

This is an amazing solution to reduce the proliferation of buttons on the board, and save some space, and make it easier to route...

Edit: I also decided to drop the "blank" input. I wonder if this feature would be ever used, and it might be a bit confusing.

Furthermore I use 3 LVC1G08, it might be better to use HC08 instead (less crazy routing to the 3×2 power supply pins despite a larger package)

Or I could just use only NC7SZ157 (MUX2) to emulate AND gates. Too bad there is no quad MUX2 in DIP18. I have 74LVC157APWR but the select lines are shared so it's unsuitable for arbitrary logic :-/

Edit: the above Flip Flop works.

I changed the feedback resistor to 10K and the the RC to 100K/100nF and it works nicely. However it is pretty sensitive to finger touches so the pads of the switches should be protected. But otherwise, it's a nice thing.

Only actual drawback: it's not easy to set/reset a latch as with the last method. So I only output one wire, that will be connected to 0V or +3V to force the state. This saves more wires (hence PCB surface and routing) and a couple of pins (one less pin after I removed the blanking input). 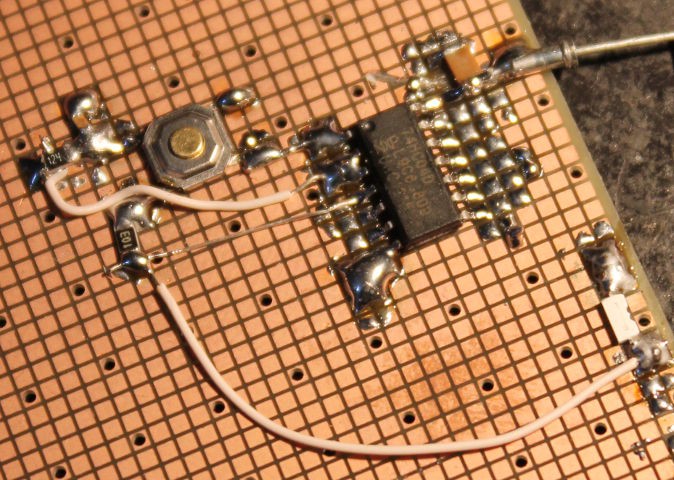