cracking the code of the itanimulli riddle

So far we have put a lot of work into decoding the border of the original FEZ images numerically - there was clearly a cyclic pattern in the data but it wasn't completely obvious what it was. Instead of filtering out the border as black/white and assigning them values, why not filter out the letters graphically and see where that goes? I started with @Moritz Walter's original images and removed the FEZ shapes from the border. The center image shows the letter-shapes that had white borders removed. The right image shows all letter-shapes removed.

The border definitely has a repeating pattern in it. In fact, we're already familiar with this pattern:

If we scale the tiny XOR mask image up it looks like this: 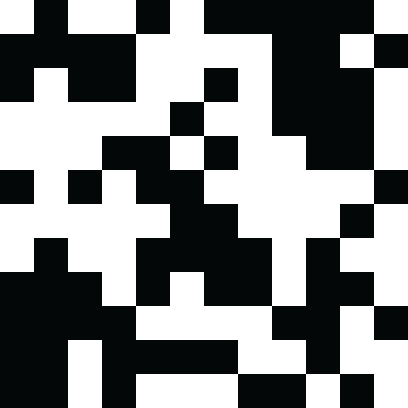 That looks like the repeating border pattern in the original FEZ graphic!? Could this be an artifact of the original XORing of the image or something intentional?

You'll also notice the repeating pattern is only 8 squares in width whereas the tiny XOR image is 12. There isn't a perfect overlap and 4 columns are unused.

I did check graphically and the pattern in the "tall" image above does overlap exactly with the tiny XOR image...unfortunately there doesn't seem to be any new data in the image since we already have any data contained in this pattern from the mask image...

Vigenère In the Comments!

Hum, there's one more chance, but it's definitely far fetched. Maybe the inverted and framed tiles do not stand for themselves, but work in context of the FEZ symbols. I.e. a tile is logical 0 if the black pixels of a tile cover more than 50%, and logical 1 if they cover more or equal to 50%. Thus, the inverted tiles just serve as a difference map. Yeah, I know, a long shot :/

They do look like bit masks, rather than any recognisable image.

Not to be pessimistic, but I should also point out that perhaps we're just meant to XOR the pattern again at the large scale, thereby inverting the inverted tiles and producing something that would all be correct FEZ symbols...If that's the case this part of the puzzle could actually be "solved"...

You should work for the government, man. No problems here, everything's solved, nothing to see here, nobody don't worry plz, we got that one ^^

I'm happy to keep looking ;) I just know from QR codes the mask itself doesn't encode data, it just serves to mix it up so the data is more distributed

^^ just kidding, I'm not sure either if there is still something in it. We have to step back and look at the big picture. How does it all go together?

Also regarding @Stuart Longland's decoding - were any of the FEZ characters actually rotated? Looking back at the original image it seems like the "rotations" actually correspond to letters in the alphabet (e.g. A, G, M, S are all the same shape under 90º rotations). What I'm thinking is that the rotation data is now accounted for as it encoded some letter information. What isn't accounted for is the background inversion - which we now know is inverted along the pattern of the tile...

No, they have never been rotated. When I made that entry, I just didn't know FEZ code so I looked at the symbols and noted how many unique symbols were in there and that they show up in different orientations.

The random seed idea is very interesting as it would give exactly this result, but that would imply that both the tile and the background were intended to be random. The inversion of the FEZ background colors doesn't obscure the symbols all that much like an XOR mask in a QR code would (or does it?) so this would require a much larger assumption about why both the background and tile images were intended to be random?

It definitely seems like the tile is in the background intentionally - the tiles themselves were also inverted in such a way as to preserve the "background" image (the FEZ symbols seem to have been laid on top of the tile background in white or black according to the color of the tile). So although the focus is clearly on this pattern, it is strange the dimensions are totally off

so, at least it does not decode to unicode, neither direction..

IMHO there's no logical explanation where this could be an "artifact" of the XOR operation we did earlier. There's only one explanation for the pattern of the tile showing up magnified behind the FEZ code: The author put it there, probably intentionally. I think the author wants to tell us that we have to take a closer look at the tile, there must be something to it. It could decode to something, or maybe we have to use it as a mask and overlay it over the blue channel. However, there's a small chance, that the author did this accidentally. If he/she used a pseudorandom generator and used the same random seed twice to generate both the tile and the "magnified tile", and if he/she then accidentally made it fit even though the magnified tile has a width of 8 while the original tile has a width of 12, but that's just to many ifs..