Finally, I decided to try something many people have made already: get hold of a powerful laser by ripping one off a DVD-RW drive. I have a plenty of those, and despite all are working, I decided to sacrifice one.

Why do I publish another project devoted to that common thing? Because while searching for what max current can I pass to that diode, I couldn't find any info online that I would trust.

So I'm trying to figure out max drive current myself! And I don't want to kill the laser!

OK, I still have no idea, what is the actual max current in terms of not killing the laser diode. But a lot if interesting stuff was revealed while measuring light output vs drive current. 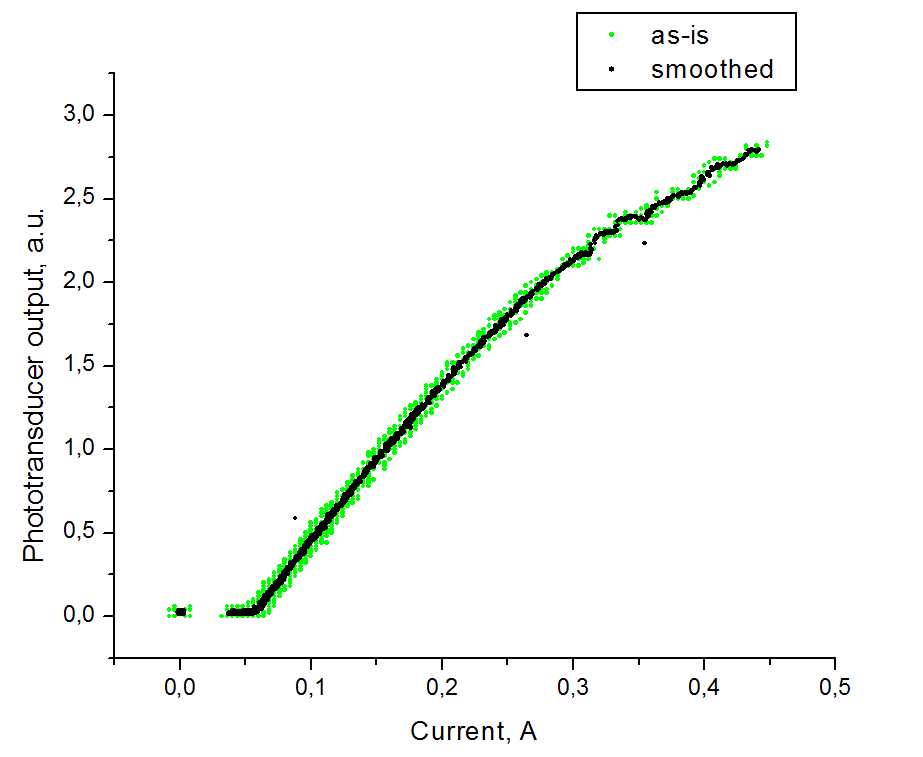 The curve starts to be irregular at currents of more than 0.3 A. The irregularity is accompanied by spatial oscillation of the beam at frequencies of MHz range.

I don't know if this is damaging to the diode or not, but for now I conclude that the diode, at least for optical purposes, should not be driven higher than 300 mA.

So, if you want to measure the max drive current for your laser, try discharging a capacitor through a resistor and the diode, and capturing current-vs-intensity curve in the process. From that curve, choose the point where it begins to be irregular, derate by 10%, and this the max current. Hopefully =)

i thank you for the knowledge,i feel angry because i brought a 200mw laser diode in a electronic component store,when the tester worker tested my laser,it was very hot,when i bring it home,the laser just can burn slightly,i accidentally broke the diode with 12v power supply.However i still feel that they did "destroy" my laser without responsibility.

This is late but congrats on the blog writeup!

Wow you are such a freaking brainiac! Looks like you know what you are doing anyway.

Congrats on the blog-writeup, yo!

In the laser diode business, we call the maximum current the "Kink current". It's the point where increasing the current through the diode does not increase it's optical output, as long as you hold the temperature constant. It will show up on the I-P(optical) curve as a roll off in output power. The optical power will start to decrease if you increase the current further.
For maximum diode life, always maintain the diode temperature below 30 degrees C, and do not operate within 10% of the kink current for long periods.

Thanks for interesting comment. But that leaves a few questions.

"It's the point where increasing the current through the diode does not increase it's optical output, as long as you hold the temperature constant" At DC, or pulsed? (Basically the same question put in different terms:) keeping temperature of what? of junction, or of case?

At DC. Pulsed operation (with ns long pulses) will often allow you to run up to 3 times the current through the diode, with a corresponding increase in output power.

Within 10% of the kink current (more than 90% of the rated maximum current). So if the diode has a kink rating of 1A, don't run higher than 900mA for more than 1 second.

Pulsing the current allows the junction to cool between pulses and allows higher peak powers.

I highly recommend these - http://www.lasorb.com/lasorb-overview/

The wiggly area in your graph above 0.3A is common as you are approaching the kink current, but can also be caused by changes in junction temperature, poor current regulation, or an issue with the measurement setup.

hmmm. I think I've read somewhere that what really kills the diodes is not the current or temperature, but breakdown of optical surfaces due to too high radiation levels and that it also happens instantly and permanently, so the critical breakdown current is not to be exceeded ever, for any duration, however short. Moreover, that current varies between diodes and in different operating conditions; as such, the only drivers that would not damage the diode are those which have their feedback hooked to the laser's optical output.

Given all that, I don't understand how you could consistently drive the laser at several times its maximum current without any problems. What have I gotten wrong here?

You are not the first one who says that here either. That there are two modes of failure: heat failure, and mirror failure.

I can guess, that for mirror, it is similar to a breakdown of a good insulator. Insulators can sustain very high voltage (E-field), but at the point it breaks down, the damage is quick and permanent.

I don't know, what the mirrors are made or in this laser, but I think they might be the faces of semiconductor crystal the lasing medium is made of. Semiconductors are much less prone to instantaneous breakage upon breakdown. For example, you can easily cause breakdown of a silicon diode, and if the current isn't allowed to grow too much, the diode isn't damaged. Same may apply here: the semiconductor breaks down, that causes light absorption, which stops lasing positive feedback. This can actually explain the oscillation of light output that I see!

Does your DVD-RW LASER diode have 2 or 3 pins?

Usually, for high power LASER diodes a monitor photodiode is integrated into the LASER diode package.

Driving with constant current and ignoring the optical feedback might either destroy the LASER or drive it at sub-optimal power. Junction temperature may vary widely during use, so optimal current also vary. It is almost impossible to drive reliably a LASER diode at nominal power without optical feedback. For more details, you may want to look for dedicated ICs LASER diode drivers or other pages like this one: http://www.teamwavelength.com/info/laserdiodedrivers.php

It has three pins, but only two of them were soldered. I diode-probed the third connection to see if there is a photodiode, but it looks like it's open.

There is a special chip on this assembly, that looks like an optical feedback thingy. It is under a diffuse semitransparent coating, directly in line with the laser diode, behind the mirror.

Shine some light on it and see if the resistance changes would be my suggestion. (Lens could also be a filter)

Im wanting to do some laser etching using an existing cnc.