For Mother's Day a few weeks ago I made my wife a game on Dodo! It is basically one of those plastic slide puzzle games like this: 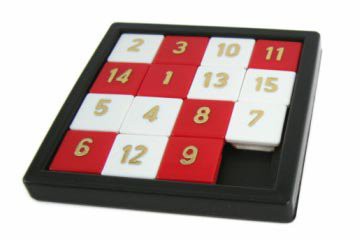 The picture for the puzzle is of our two kids. My wife loves big band music so I set the background to 'Moonlight Serenade', which is her favorite. That era of music reminds her of her Grandparents. The game is written in 'C' and is only a few hundred lines of code. The screen is 128x64, so the puzzle is rectangular instead of square. At first I sliced the image up so that the puzzle would be 8x4 (32 pieces). This proved to be very difficult to solve, especially with the image being low resolution and dithered. Each piece is completely unrecognizable until it forms the final image and you look at it from a distance. I then changed it to 4x2 (8 pieces) which felt about right in terms of difficulty.

To load the image I found this great little project on Github that simulates the Atkinson Dithering from early the early Macs. I use this to create the bitonal image needed for Dodo.

The game has the concept of a Cursor. If you click 'A' while the Cursor is on a piece next to the hole, the piece then moves to occupy that hole. To support the cursor I added the XOR drawing mode to the sprite drawing function. Repeatadly drawing a white block in XOR mode over the piece causes it to flash.

The music is encoded by hand in the following manner:

I have defined the various notes needed by the music. Each represents a number that is used by the VIA shift register to ultimately output the correct frequency. The music is a byte array alternating between notes and durations. A duration of 1 amounts to 50ms. For the tempo of the song, and to make it possible to encode triplets, I chose that a quarter note will be represented by 12.

If a note of 0 is output, it represents silence.

As you can see, encoding music can be a touch complicated, but to me, it is actually pretty fun!

Thankfully my wife loved the present. I gave it to her on a game cartridge in a card! Here is the finished project:

This is really impressive. Good work!