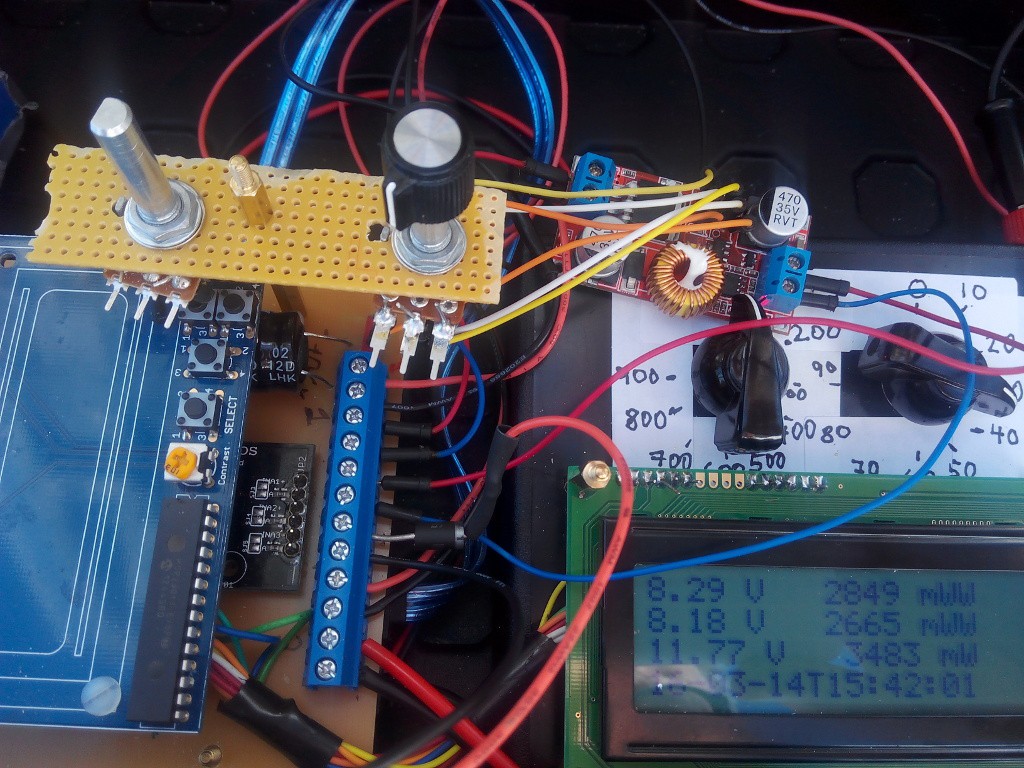 But that didn't work-here is what happened:

I start out with a very low current limit setting which makes the solar panel operate at about 14 Volts an a very low wattage of about 0.1 Watts. Then I slowly turn the potentiometer to increase the current limit and hopefully stop at the maximum power point. But what happens is that the voltage suddenly flips to the battery voltage, and the harvested power is far below of what the solar panel can deliver. At that point, the battery is at 8.18 Volts, and it forces the circuit to run the solar panel at 8.29 Volts which results in a power of 2.8 Watts at the solar panel. However, the solar panel is capable of producing 3.5 Watts under the given conditions which corresponds to a solar panel voltage of 11.77 Volts and which I verified with the variable load resistors.

So the voltage flips between about 14 Volts (open circuit voltage) and the battery voltage, and no matter how carefully I turn the potentiometer, I just cannot get it to stop in the middle at 11.8 Volts, the MPP voltage.

I'm not sure if this behavior is the result of the used controller chip on the buck converter, but at this point, I am planning to build a system where I have more direct control over the duty cycle of the PWM.

that's a very nice solution! Thanks for the post

I did it by injecting a small current into the CV potentiometer to change the voltage set-point.
Regards
Laszlo

No, I didn't try that. In the mean time, I built the whole circuit and it works great. The attempt with the purchased buck converter would have been convenient if it had worked, but ultimately, it is best if you can control the PWM duty cycle with the microcontroller directly.

Hi, did you try with any buck AND boost converter from ebay/amazon? There are some that can control output voltage and current, and also input voltage.