But does it run Linux?

Getting a recent Linux kernel to run on the T030 turned out to be much less painful than I first anticipated. Mostly because someone had allready done a lot of the hard work.

When I started putting the T030 together, I was not aware of any recent homebrew projects using the 68030 processor, but a couple of months ago I found this:

The KISS-68030 is designed by John Coffman and features a very nice, clean and simple design with a DRAM controller implemented in three GALs capable of running two 72 pin SIMMs.

And Will Sowerbutts has ported Debian Linux to the KISS-68030:

Check out his videos, they are very informative.

Will's kernel patch has been the most valuable resource I have found online for porting a recent Linux kernel to a homebrew m68k-based board. With that at hand, it didn't take many hours of work before I had the first kernel messages spewing out on the console of the T030.

It took me a while to figure out, but the assembly code in arch/m68k/kernel/head.S is fully relocatable and runs fine from 0x1000000. No need to mess with the kernel linker script, which I tried at first which didn't work. All I needed was to add transparent address translation for the MMU for the second last 16 MB chunk of the address space for the memory mapped IO (ROM, SRAM, IO and DRAM areas are mirrored throughout the address space).

I have added functionality in my ROM BIOS to supply the bootinfo structure at the end of the kernel image, which contains parameters like RAM location and size and the kernel command line.

With that in place, and with timer A in the 68901 MFP set up as timer tick for the scheduler, I was able to load the kernel to the point where it tries mount a root file system and start init. Without any real storage available yet, I have created a small initrd image with a statically linked busybox binary and a small shell script which outputs some stuff to /dev/kmsg (no real TTY device available yet, only the simple boot console).

Then I ran into another problem. No matter what I tried to use as init, the kernel just got an "unexpected bus error" and died. Further debugging revealed that the culprit was floating point instructions. But shouldn't the FPU emulation take care of that? A good number of hours later, I found the real problem: An error in the glue logic caused the ROM to respond during coprocessor bus cycles in CPU address space, resulting in a bus error exception instead of the F-line emulation exception needed for the FPU emulation to work. Doh! 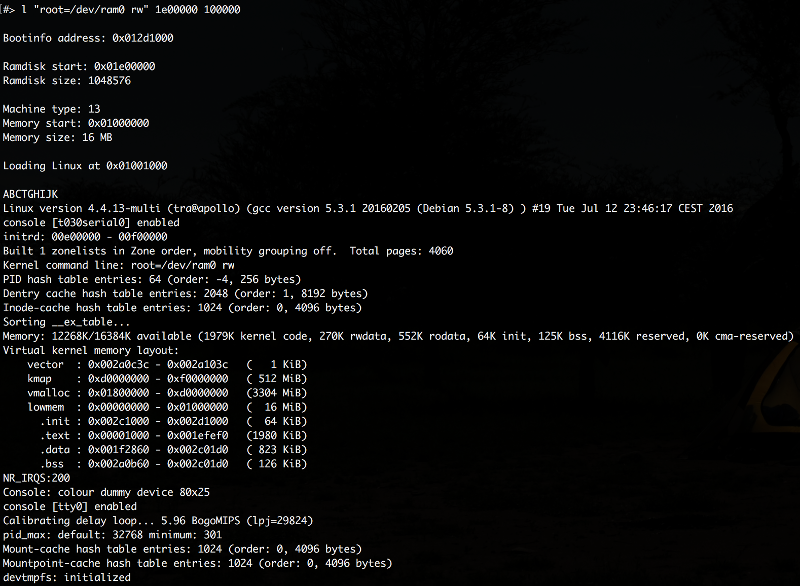 Notice the kernel messages with the 68901 serial driver. That is work in progress and it doesn't work yet. Before this project, I have never done anything with the Linux kernel source apart from just compiling it for different platforms. In other words, I still have a lot to learn about kernel programming and device drivers, so it will probably take a good number of attempts before I have a real TTY driver for the 68901 UART.

When that is complete someday, it should be possible to get at real shell. Then the next thing will be a SPI master driver for the TP3465.