The Case of Cases

Context being more that of the puzzle of cases not one case "to rule them all," but I digress. The past week I've been going through a few catalogs to find an enclosure for D-DAQ's mainboard. Previously, the PCB's form factor was based off of an idealistic & minimal footprint to make it easy to put anywhere and I needed a common IRL item to build from, of which a credit card's dimensions were chosen. Now that the design is maturing, I need to actually put the PCB in something for practical use and that is more irksome than one might think.

So, more than a week ago I began hunting for the "perfect" case/enclosure. I'm a photographer by passion and trade so there has to be an apparent visual aesthetic, though with my obviously technical nature, practicality is equally paramount. I I've seen Dangerous Prototype's case for their boards and recently, thanks to the link roundup post, I became aware of Paul Allen's case for his battery charger. Now an acrylic cover is just sweet and provides enough protection from the accidental touch when you're a hobbyist/enthusiast, but for a potentially hostile environment even as mild as the inside of a car, those won't cut it.

After figuring out the quires to get the right kinds of cases on google, I came across this guy which I was hoping would be perfect:

It wasn't tan, it'd fit nicely in your hand and supported a PCB really close to my original dimensions. Unfortunately, due to the grips and the pinouts on D-DAQ, this case was just too narrow. I needed like 5 mm more and I'd have been set.

I'd seen the company "Hammond Manufacturing" come up quite a bit, but all I was generally finding was their tan or naturally finished aluminum cases. I was also noting a trend in cases where the access to inside:

Because I needed a silicone hose to enter the enclosure as well as 9 USB cables, 3 Mini DisplayPort cables, and 3 groups of misc wires, I quickly came to realize that there was no sold way to weather proof this without a major redesign of the the receptacles and significantly enlarging the end device which would inflate the cost as well. So I figured that I had to start thinking in 3D to get this to work and the simplest case design to go with was that with a form factor like my first one up there.

Well, over the past week I came across what was almost my for sure choice, Hammond Mfg's 1553 series in translucent blue. 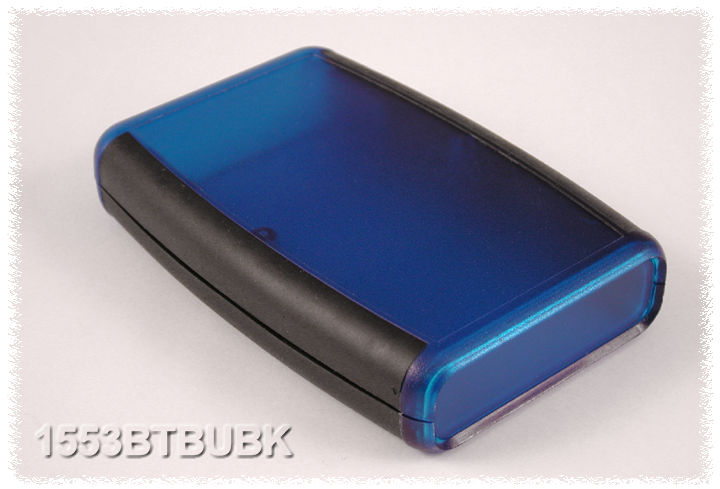 With 2 end caps, it was an improvement over the PPL and the translucency, despite my despise of blue LEDs, would do well to allow easy viewing of a few recently added status LEDs on my main PCB. This latter practicality and aesthetic made up for the bulbous design. I wasn't completely satisfied because though it was plenty big enough, I can see from the dimensions of the max PCB that it was too big for D-DAQ.

While trying to trudge through Mouser's catalog for cases, I came across Serpac's A27.

Heh, if I was going retro, this would be perfect. Nothing against retro, this harkens back to Tron if I added a dash of EL wire along the seams and perimeter of the end caps. For another project, maybe, but definitely not for D-DAQ. I'm sorry. That being said though, this case actually supports mounting 2 PCBs, one in each half of the shell and has a variety of end caps so it's pretty pragmatic.

One last case to show off that I rather liked. When browsing through mouser I came across Bud Industries but due to a friend's recommendation, I had a look at their site. The Style I case isn't half bad looking.

Unfortunately it's just too square and some of those dimensions are just not listed. Yes, I can reverse engineer them with a little help from Photoshop, but there is another snag. Remember how I mentioned that there are 9 USB cables? I need to get those receptacles to mount as close to flush as I can on the outside of the case. With a style like this, there is a definitive top and bottom side and this adds too much complication to PCB design for me to pull off for the sake of physical form factor.

Well, just a short while ago, I came across another case. Just after the Style I, there was the Style G.

Now, I wasn't originally going to move over to a separate PCB for the power supply subsystem with revision 4 of D-DAQ, but  I know I'm going to have a difficult time fitting that section of the circuit onto the board with the adjusted layout. With a case supporting 2 PCBs, all I have to do is provision for some board-to-board interconnects which will be relatively painless. The added depth and small size of the power supply PCB makes room on that side of the case for a small, internally mounted fan. I'm already going to have to pass to case to a machine shop so what are a few more holes for exhaust vents? All of the USB ports, the EGT receptacle, the Aux. Press receptacle, and the boost pressure sensor will all stick up through the top of the case. The Mini DisplayPort receptacles will actually have to flip over to the bottom of the board for clearances instead of mounting on the same side. Ironically, this makes for a small case of using the original reversed mount receptacles though I'm not actually using the cable for this purpose. Toss in a couple light pipes and the LED indication concern is solve too.

Now that I'm decided as to where this board will be going, I can finalize keep out regions for screw mounts/passthroughs and begin adjusting the layout to take advantage of some breathing room. Here is hoping everything else will fall in place as a result of this decision.

Still plugging away. Though the case is massively larger than I was wanting, it has room for growth. I'm adding 2 pics to show what I've been doing the past few days. So far I'm figured out some good sized grommets to use for mounting the board to the chassis of the case, created the appropriate parts in Eagle for the grommets, which are modified versions of the holes that SparkFun provides in their library, and have adjusted most routing to stay away from these areas.

Now, because of the huge size of the case for the bottom PCB, see photos below, I will be mounting a largish fan in the bottom of the case, that will be sized under or near 15 mm tall and 55 mm square. I've mapped out and confirmed with the to-scale prints there the end panels lay, the height to the ceiling, wall thickness etc. etc. This work may seem anal or pedantic, but dictates if I have to change parts for the terminal blocks receiving wires for misc sensors, if there'll be enough protrusion or of the USB ports, or if I need a chamfer cut around the holes because a lack thereof.

Tedious work nonetheless and though the results are not physically tangible yet, I just imagine Hannible saying the every popular line: "I love it when a plan comes together."

In case you're wondering because you don't recognize it, that's a Voyage 200 in the upper corner. It's large screen, QWERTY keyboard, pretty print equation display, complicated unit conversions, and a CAS make it my go-to calculator. I have a hardware version 1, TI-89 around, but it's it just doesn't hold it own unfortunately against this guy.