I like to make many things and have a particular fondness of clock projects. This one was inspired by an hourglass bulb that I have had for a long long time - from an hourglass that I never got to finishing. Rather than put it in the conventional sand timer configuration I wanted to integrate it into a clock. I really like the idea of a clock that is accurate but imprecise and the hourglass fits that concept very well.

The clock has two rings: the inner ring holds the hourglass and the outer ring has numbers to indicate the hour. Inside the clock there is a wristwatch that keeps track of the time. The hourly chime is conditioned and triggers the rotation of the hourglass. That flip resets the minutes indication as well as advances the number to the next hour.

When I finished the clock I put together a quick video describing the clock. There wasn't any video to speak of that was taken during construction though there were a bunch of pictures. This details section walks through many of the steps that were taken in building the clock. The video does have a time lapse of it's operation at the end.

First up in making this clock work was to decide how to flip the hourglass. I figured that having the inner ring held by a curved piece going across where the hourglass is thinnest would give me a nice spot to attach an axle of some sort. That approach meant that I needed the the ring to be pretty strong as it would be carrying all the weight. It also needed to be thin or the size of the clock would get pretty big. I didn't like the look of plywood here so I went with segments of maple that I formed into a few rings and rotated them so I essentially had lap joints. 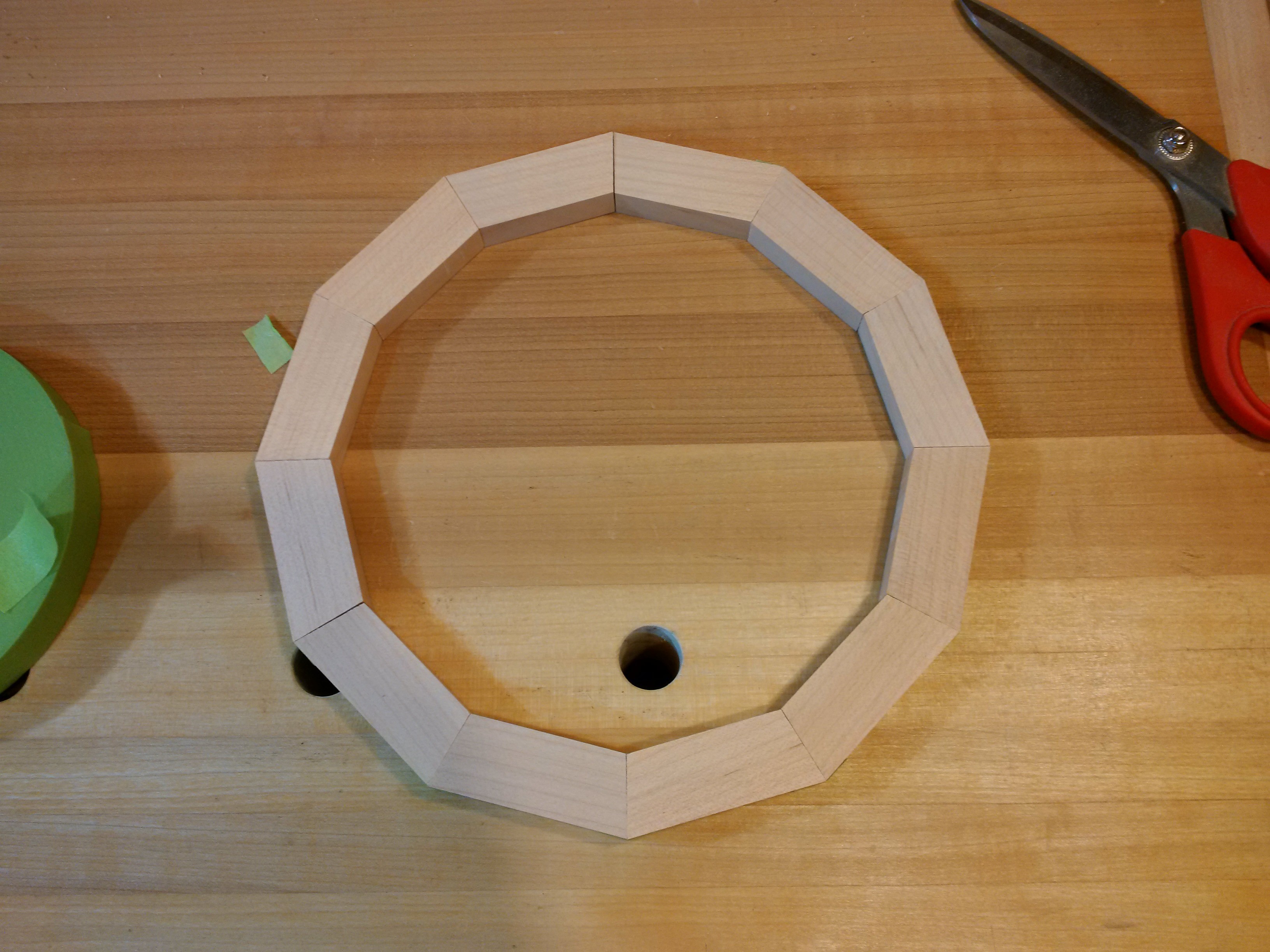 This also caused for a bit of a side project to make a saw guide as I don't have a good way of making these cuts clean enough with a power tool.

After trimming it up I was able to calculate the size of the outer ring. There are only a couple of ways that the outer ring can have a new number on the top each time. Having a large ring where the half rotation of the inner rotated the outer 30 degrees (six times the size of the inner) was not what I was looking for. Having the next number at the "5 o'clock" position makes for a nice look and keeps the ratio of the mating ring surfaces 5:6.

The outer ring is not as deep but is wide enough to put on some reasonable looking numbers. 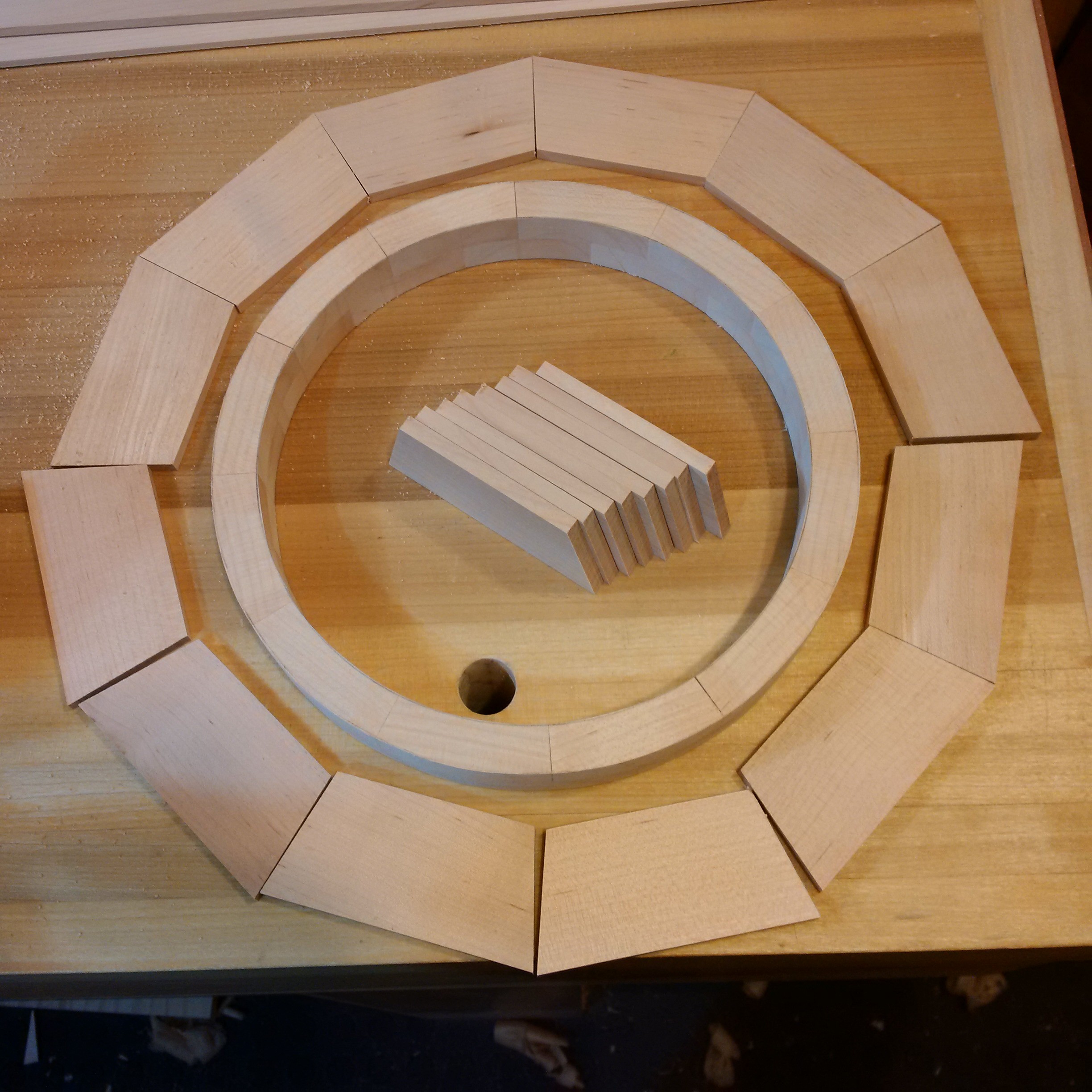 All of these rings were first glued together on their edges. To do that I taped one face together, put glue in the joints and pressed it down on the bench with a weight till it was set. Next up were two more problems that needed solving; keeping the outer ring in sync with the inner and keeping the ring from falling off. Both were solved by having some gear teeth built into the rings. I chose to only have the teeth protrude from the outer ring as I liked the look better and it made things slightly simpler. I switched the grain direction for the outer teeth so they would not break off. 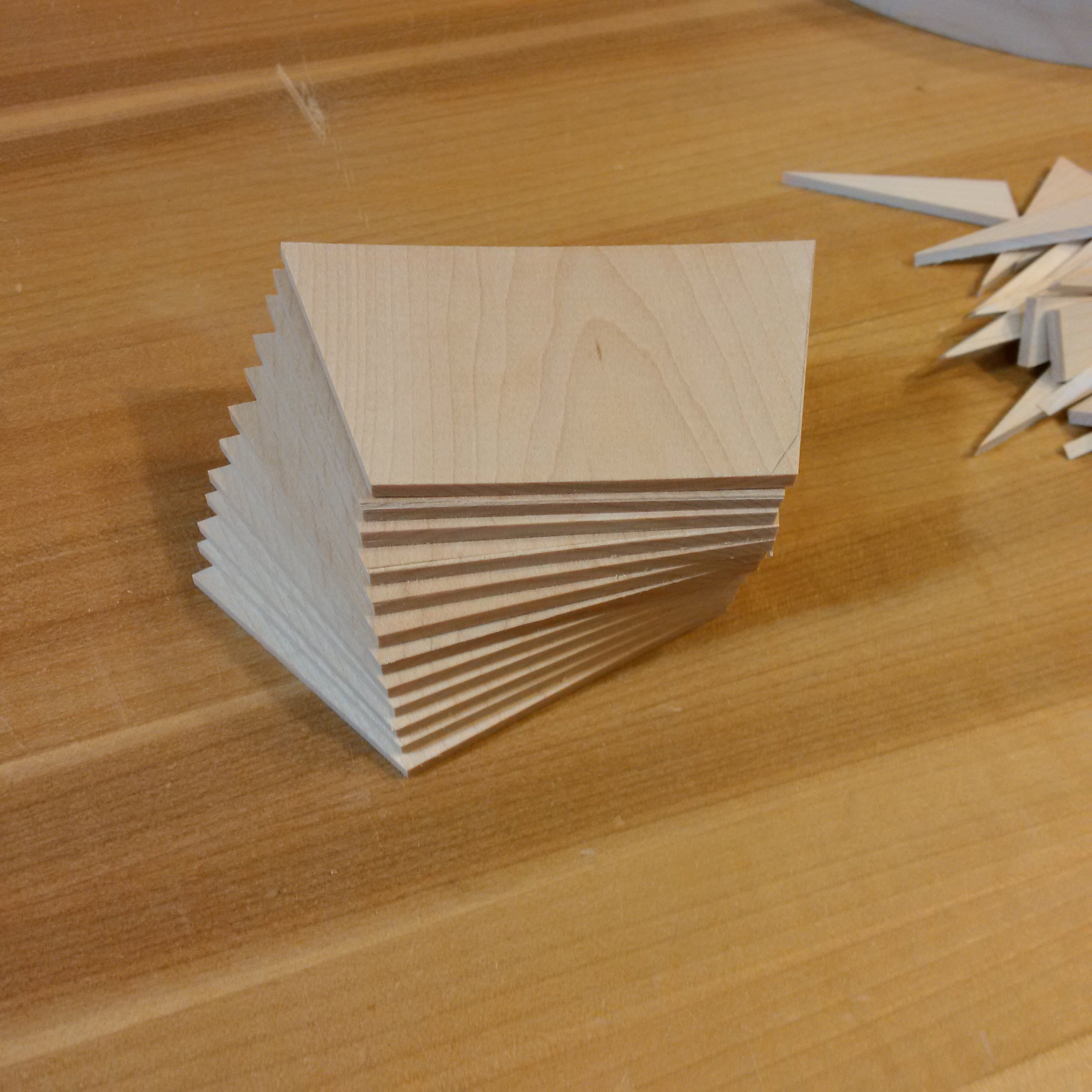 I glued them together like the other layers, glued on a template and cut them out on the scroll saw. A saner person could have chosen fewer teeth however I realized that by using 55 and 66 teeth I'd have the ability to make a 24 hour ring so I went with that. 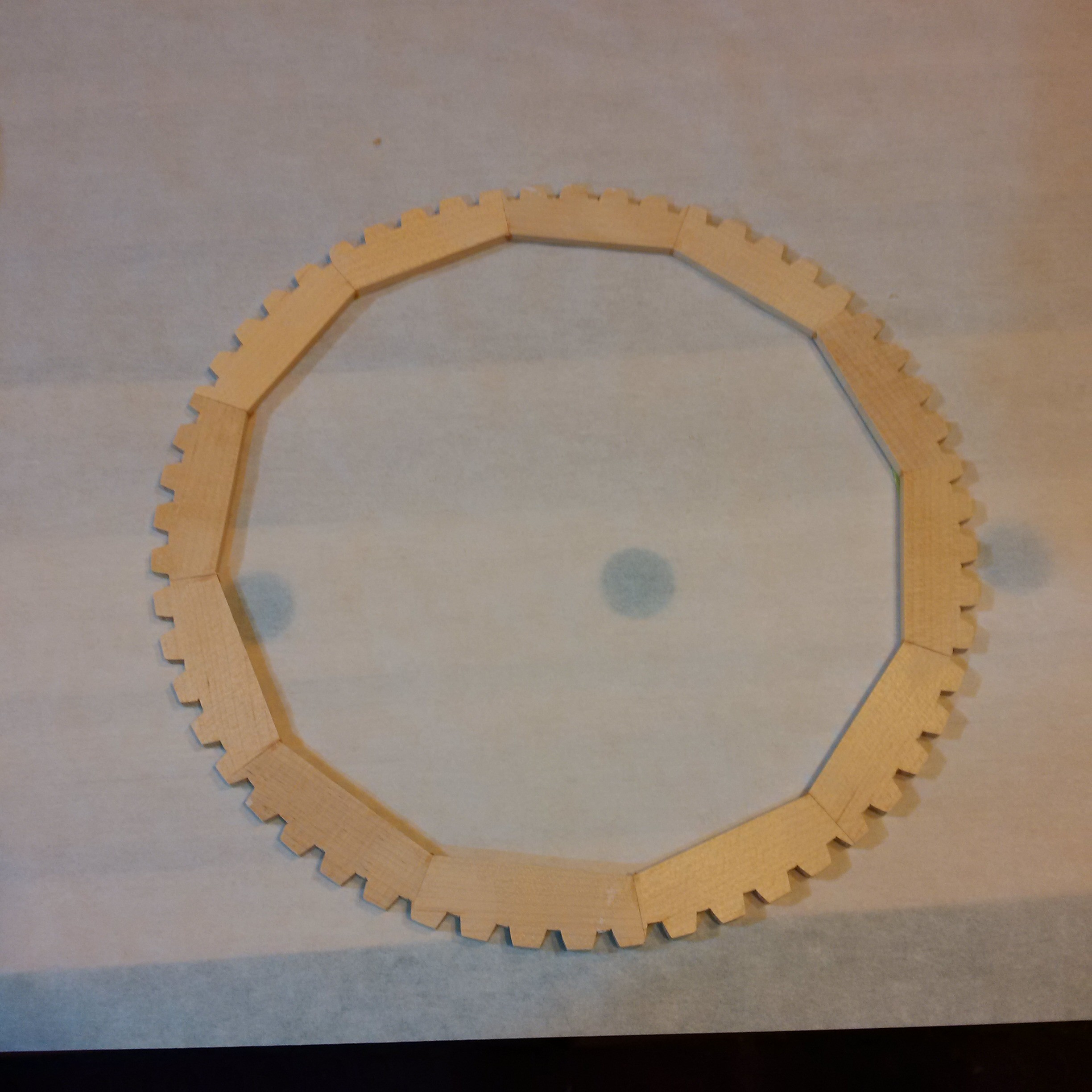 Turns out that I was off on my measurement of the length of the hourglass by a few mm so I had to take some out of the middle. Once I had the hourglass fitting nicely in the ring I marked out where I wanted the pockets for the top and bottom. For one end I wanted a little bracket that I could screw so that the hourglass could be removed for cleaning and for when the finish is applied. 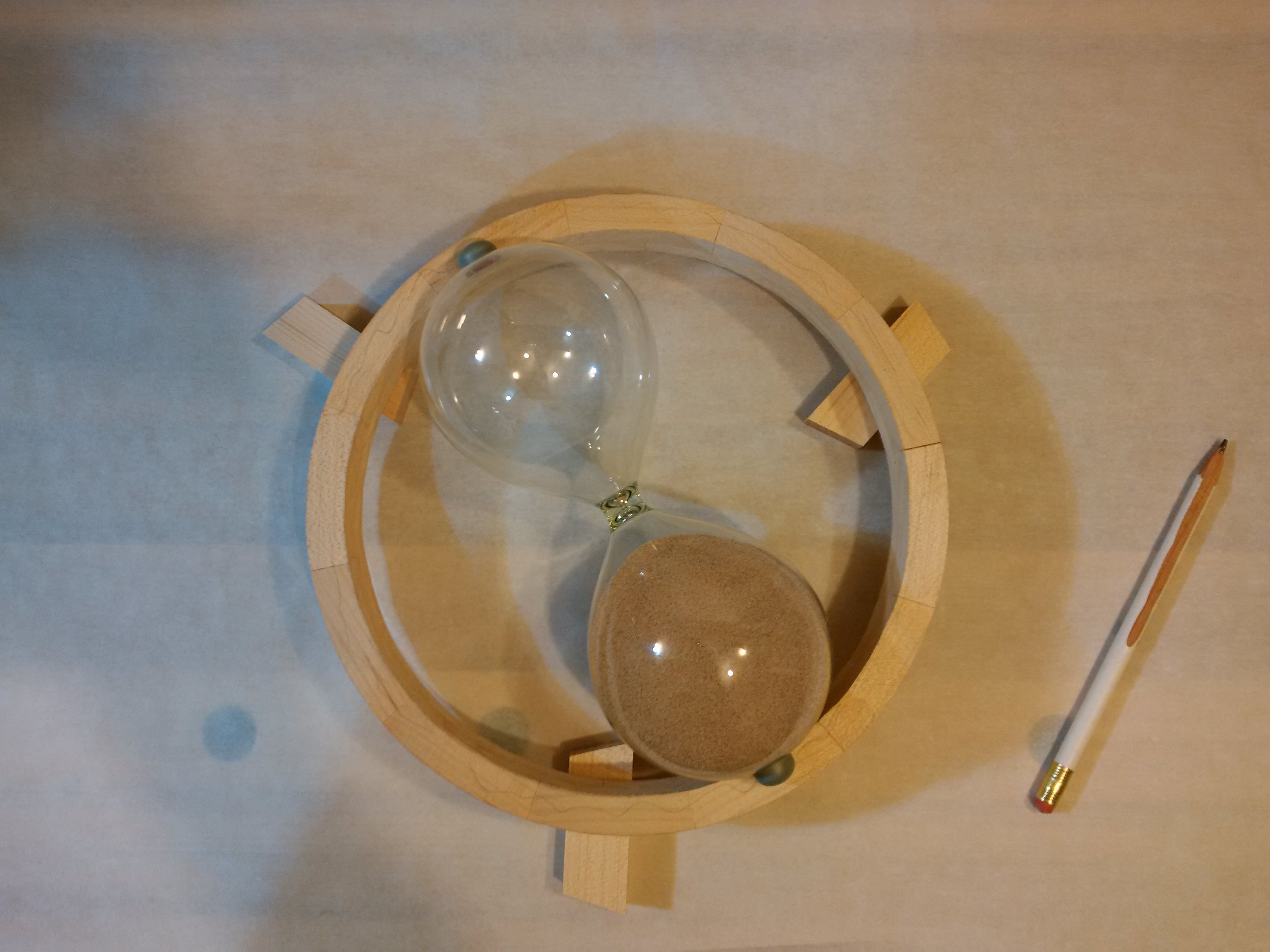 Gluing the remaining gear layers together was straightforward but took a lot of sanding, fiddling and smoothing to get everything meshing right. A lot. If I were doing this again I would take the time to make some sort of circle jig on the router to make it perfectly round. 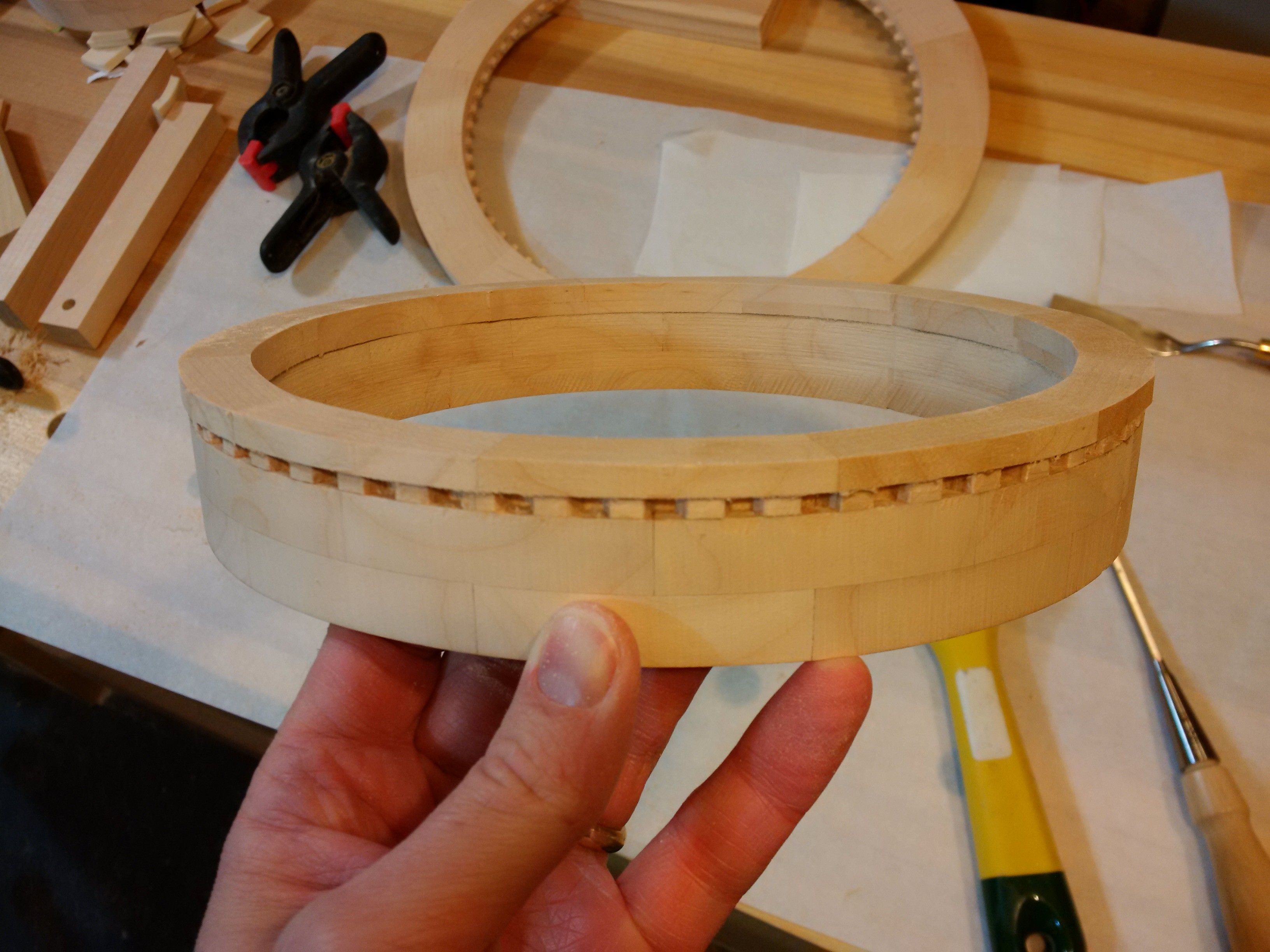 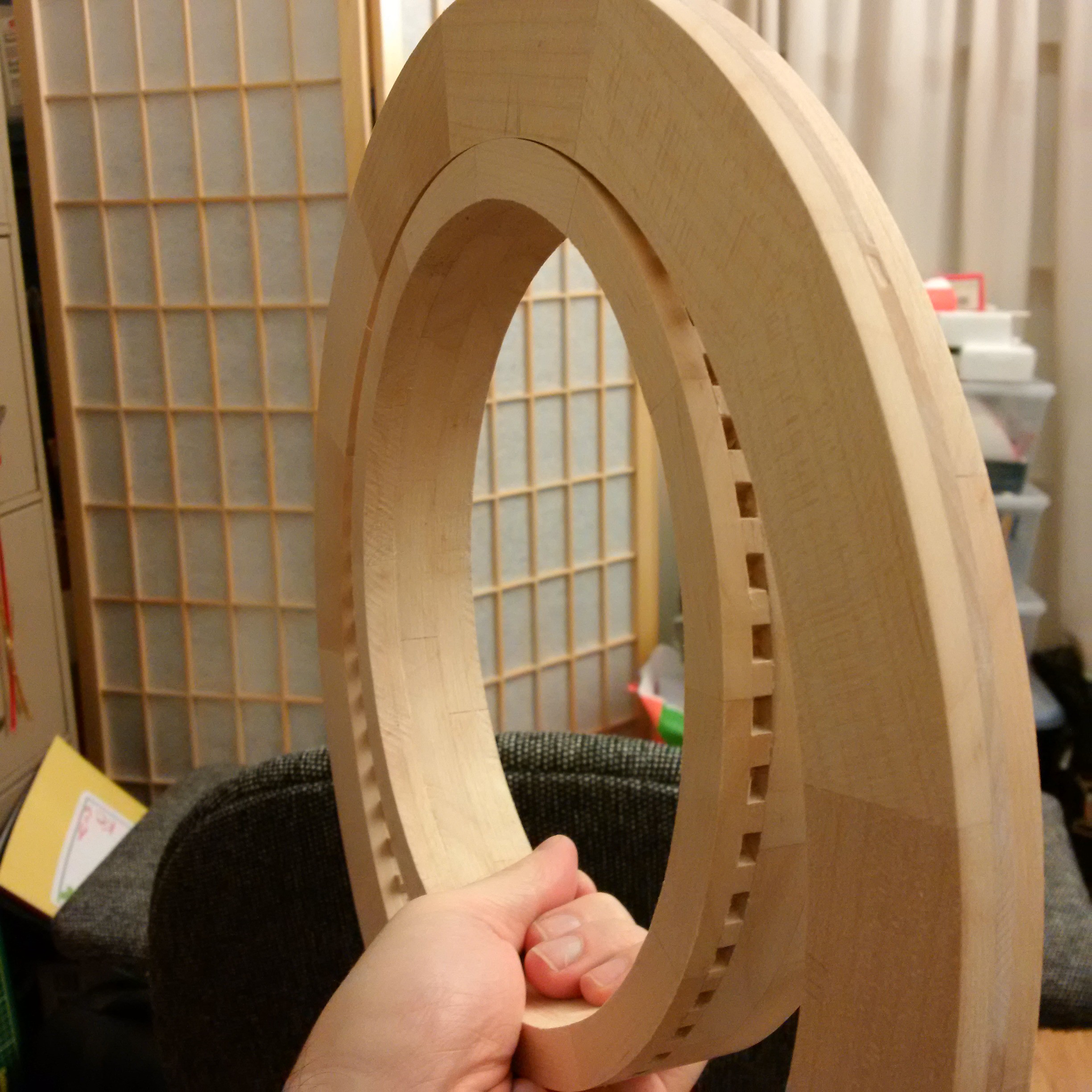 Next up was the support to connect the ring to the shaft. From the top I wanted the shape to be circular but I also like subtle curves so I tapered the support out to the sides. It was roughed out on the band saw then I added relief cuts to remove the bulk of the waste and finished with rasps and scrapers. 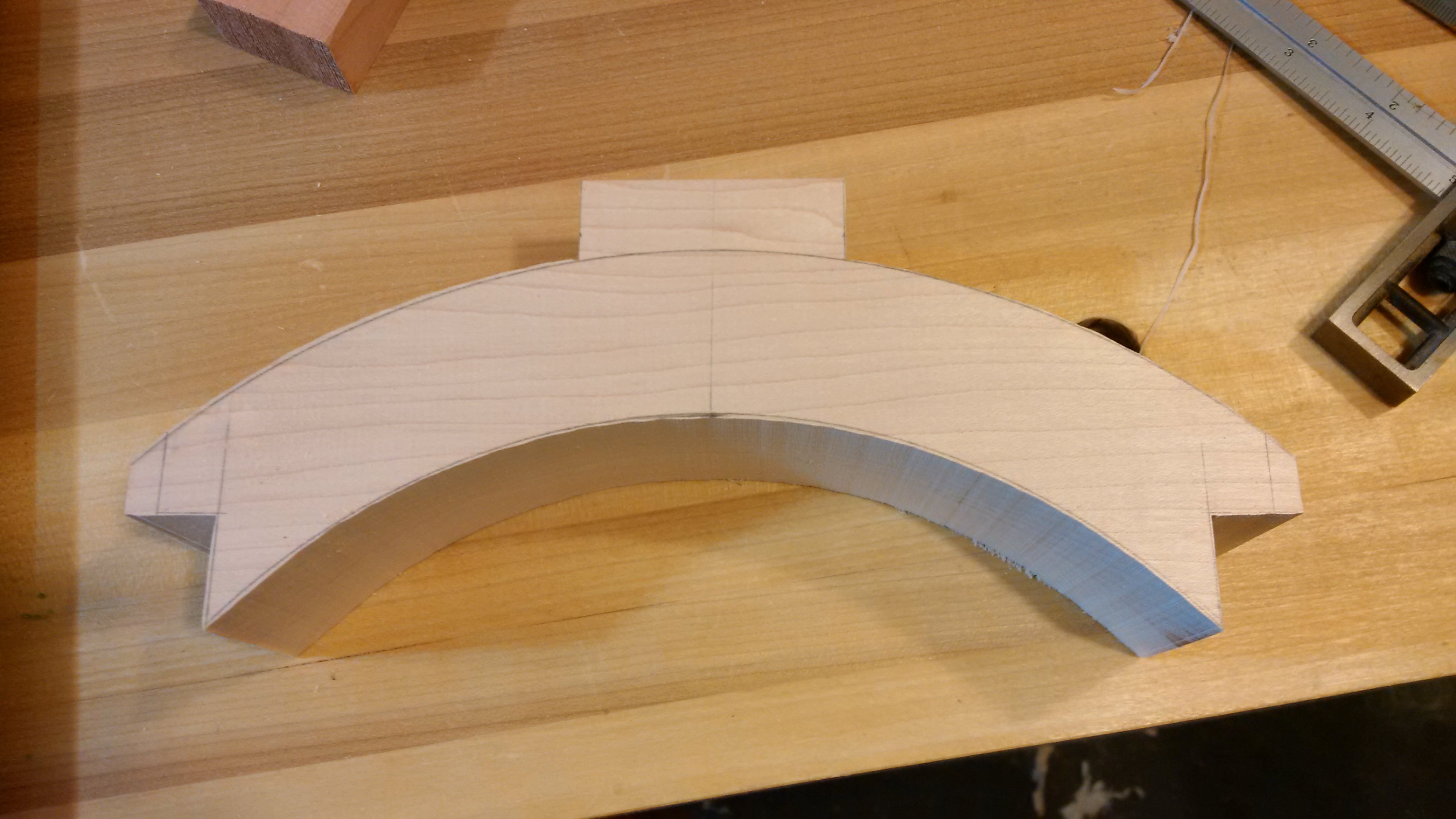 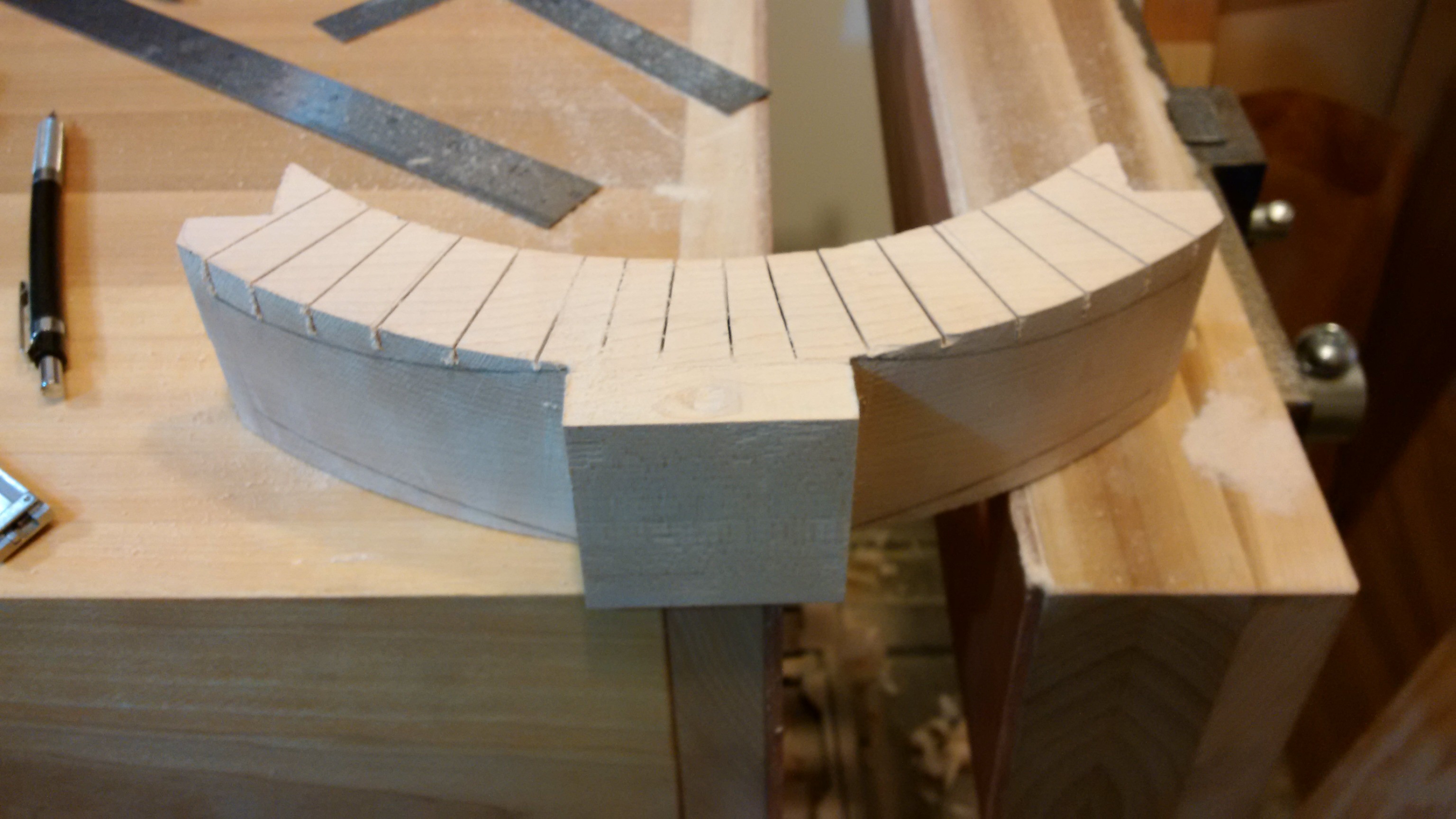 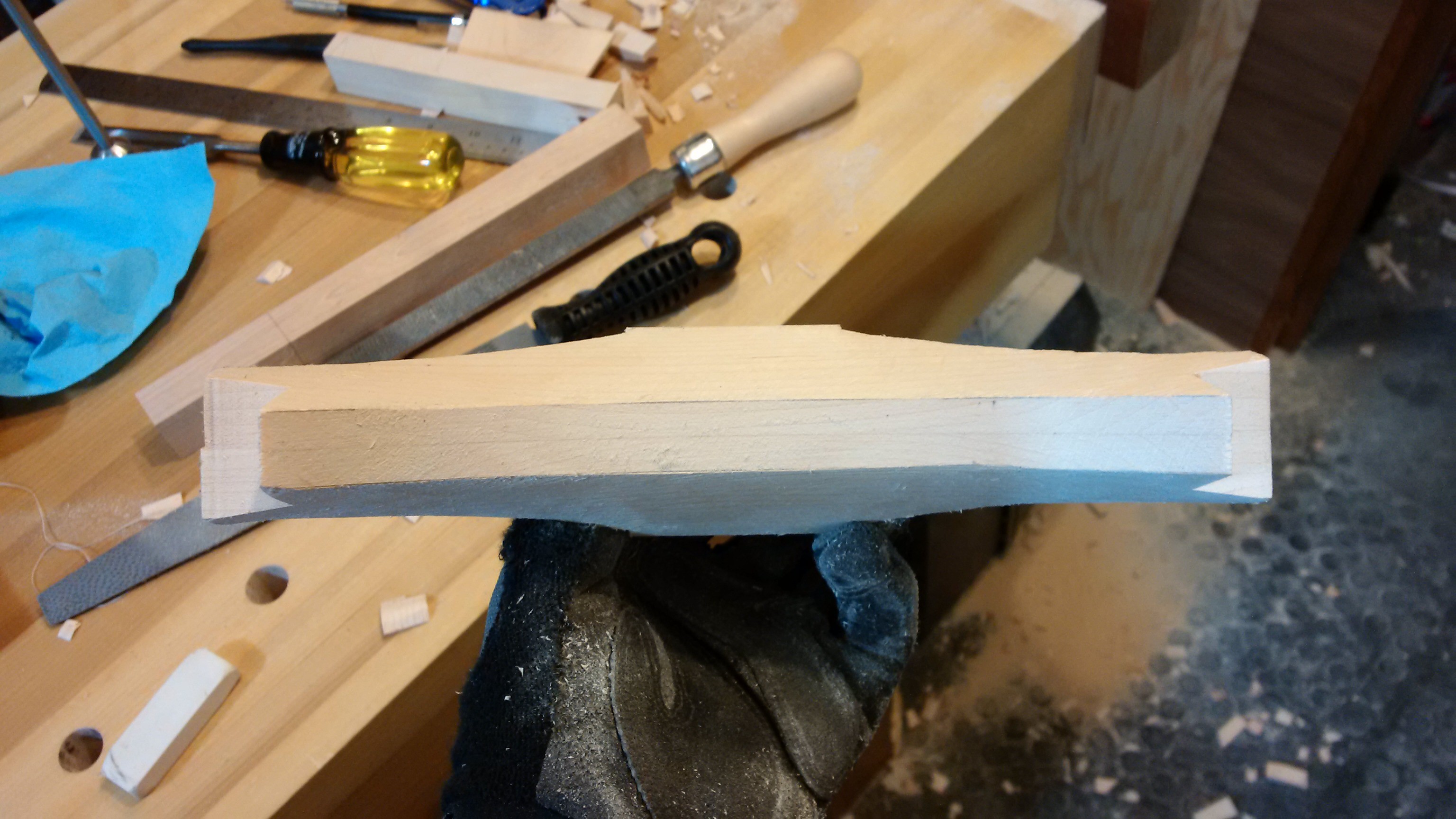 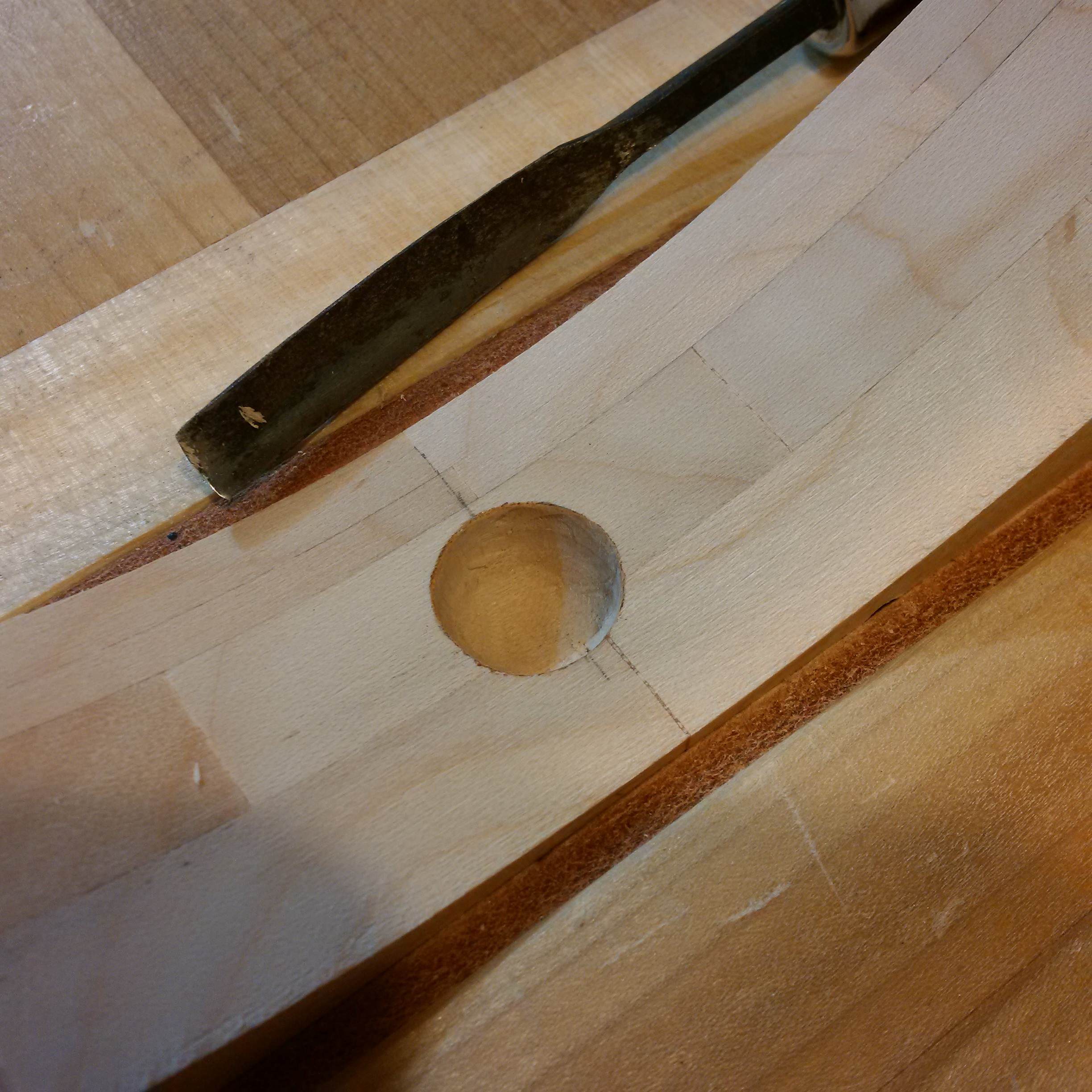 The other end was similar and with some fiddling I was able to make a little bracket that let the nub of the hourglass slide in. After some more smoothing and fitting of the brace I was able to glue it in place. I found where the center of the shaft should go with a compass and drilled a mounting hole for the shaft on the drill press. 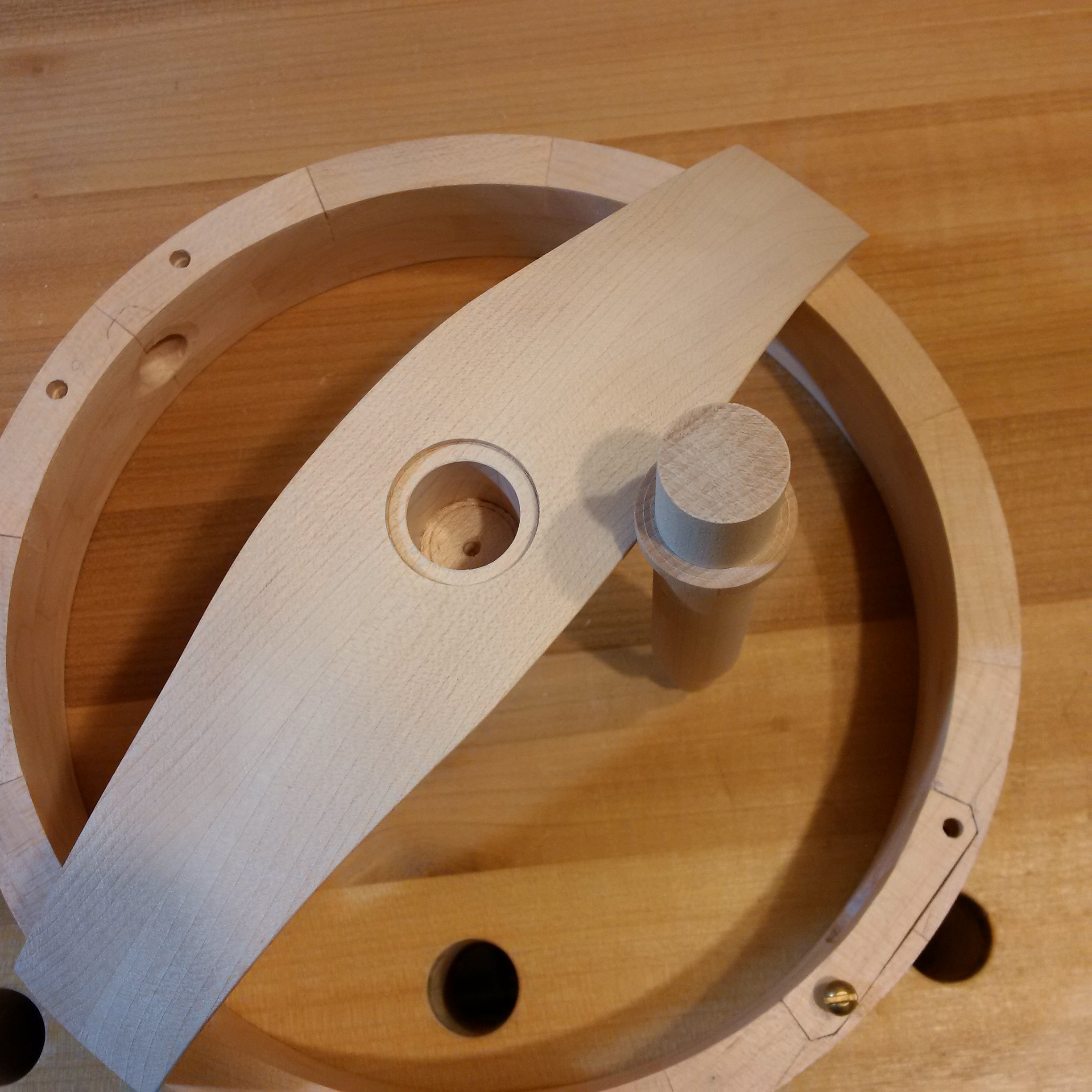 I turned the shaft on a small lathe to support...

Thank you for adding some wonder to my week!

There's so many clever, delightful aspects to your work but something about having that beautiful analog, deadbugged, potted circuitry hidden away, just waiting for someone to take a peek inside the cabinet really tickles me.

Congratulations on the project, very impressive job! How could i make the purchase of this clock and when will it be for sale, please advise

A cuckoo clock inspired by the Xenomorph stages from the Alien franchise.
Project Owner Contributor

A clock that is very tired, hands hanging down. Until someone approaches it
Project Owner Contributor