Uri Shaked12:55 PM
I don't believe those are mutually exclusive.

Thomas Shaddack12:55 PM
Talk him into opening it if the commercialization fails.

Inne12:56 PM
@Uri Shaked Regarding the up comming HADU Pico course, is there something you wish to see/would happen during the course. What would make you happy.

ailaG12:56 PM
Or find someone to fund it as open source for him

Uri Shaked12:57 PM
As I see it, making LOTS of money is a skill, which is pretty much orthogonal to being a great developer, creating amazing projects or anything similar.

ailaG12:57 PM
opensource is awesome but it is a challenge

Dave Blundell12:57 PM
I don't sell any open source things, yet, but have two projects I'd love to be open if I can figure out a way to

Uri Shaked12:57 PM
@Dave Blundell I'd start with interviewing Limor from Adafruit and Nate from Sparkfun

RichardCollins12:57 PM
I agree, but he is rather stubborn and wants to change all computing - "his way". I love him, but he can be hard to love. Yeah, i offered to help him raise the money. He just wants to do it his way, and probably does not want his older brother to help him.

I have some and are one!

Uri Shaked12:59 PM
@Inne I'd love to see creative things people do with what they're learning.

No, but do that same thing enough times and you can make it something big

RichardCollins1:00 PM
I downloaded Wikipedia the last two days. When I was working on Google ngrams, I had a problem that was taking my program 32 hours to run. He memory mapped and optimized and it ran in three minutes. I beg him to let me use that to solve some Internet global problems, but he has some other things in mind. He is thinking about my Wikipedia problem.

Uri Shaked1:00 PM
For instance, in the AVR course, people had an assignment to build a pong game in AVR assembly, from scratch.

Uri Shaked1:00 PM
It was fun to see how everyone approached this differently, and some people even went the extra mile and added some fun features like a speaker

Uri Shaked1:01 PM
@Dan Maloney as Derek Sivers once said, you never know where the lottery tickets are.

rjtescher1:01 PM
Pong? Whoa! I feel that could easily get over my head!

I always thought the way they added "English" to the paddle in hardware with the original Pong was a pretty cool hack.

rjtescher1:02 PM
@Dan, so there was "English" involved?

No wonder I was so bad at it!

RichardCollins1:02 PM
@Uri Shaked How about "Find all the covid mentions on the Internet (about 8 billion), identify the owners, contact them, classify the use and purpose, enroll the people in a global cooperative effort. Copy the problem to more computers, keep going till you find everyone and get them working together =--- simple algorithm, hard to get enough computer resources to do. And human buying in and agreement. 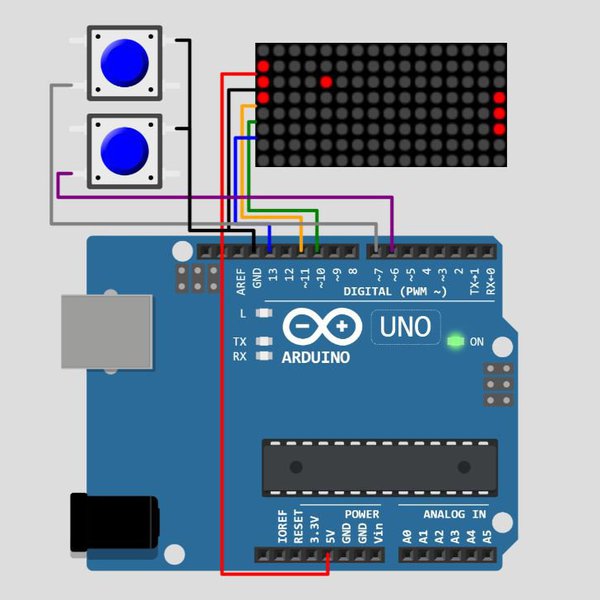 I attended the AVR assembly course, and it has a Final Project or Examination. This is my submission thereto. Well, it is more than that, it is also my trials and errors on getting there. While the main purpose is to present a software implementation on the wokwi.com simulator, this project will also run on real hardware.

Michael Möller1:03 PM
Thanks for the mention.

I'll have to look that up -- think I mentioned it in a story I did when the dude who wrote pong passed away...

Ted Dabney, that was his name

It may be hard for those raised on cinematic video games to conceive of the wonder of watching a plain white dot tracing across a black screen, reflecting off walls and bounced by a little paddle that responded instantly to the twist of a wrist.

Looks like I didn't include that nugget. Think it was something I stumbled upon while I was researching. I'll see if I can find my notes

Do you mean this little nugget?

"and bounced by a little paddle that responded instantly to the twist of a wrist."

Michael Möller1:07 PM
I got hold of some TTL logic diagrams to build it myself ... in those times .. TTL too expensive. And the TV modulator was "black box"

Now, there was some specific set of gates that they added to make it take more skill to play -- the angle of reflection would change a bit depending on which part of the paddle you hit the ball with. It was pretty cool stuff.

Uri Shaked1:08 PM
And now people are building AVR pong in assembly in matter of days

Oops, look at that -- we're past the top of the hour. Uri, thanks for being on today, this was great - I knew it would be a rambling Hack Chat, but didn't expect molecular evolution and Pong in addition to AVR and RP2040! Great stuff, thanks so much for stopping by!

And thanks to everyone for the fun questions and great discussion. We're taking next week off, but be sure to check in again on May 5 when we get back together again.

Thomas Shaddack1:10 PM
Thanks as well!

Dusan Petrovic1:12 PM
Thank you all!

Looking forward to your next HaDU course, too. Good luck with that!