Inne12:25 PM
@Hugh Mungis A cyberdeck device that drills he connectors back in :D.

Dan (a8ksh4)12:25 PM
@io Tenino You can use a buck boost converter in front of a charger and as long as it supplies enough current, it'll give some flexibility.

thesebelik12:26 PM
I am thinking I might need to have some kind of battery backup system for mine. since it's going in my car i can power it off the 12v from the car battery 99% of the time, but i'm pretty sure my car cuts all power to everything but the starter when i turn the car on. For my work I end up turning my car on and off frequently, so i'm wondering how to keep a reliable power supply for those moments? i would like to avoid shutting down every time i turn my car back on.

bootdsc12:26 PM
Whats everyones favorite form factor for computing devices? For me its the netbook.

Inne12:27 PM
@Hugh Mungis conecerning silicone: Well for instance adding soft robotic components like grippers to mount your divice to something. Or using air pressure as an input method.

Soft Robotic Gripper : The field of soft robotics (robots made from intrinsically soft materials such as silicons and rubbers) has been growing rapidly in recent years. Soft robots can be advantageous in comparison to their hard counterparts because they are flexible, ada...

Read this on Instructables 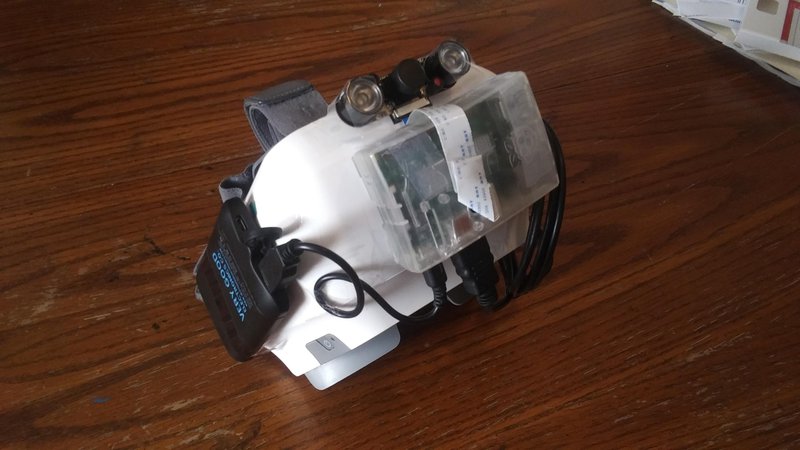 cyzoonic12:28 PM
@Inne Was looking into making silicon buttons for a movie prop i'm working on, but its quite complicated.

H3lixFossil12:28 PM
but he has a power bank and the pi AND infrared lamps on it

H3lixFossil12:28 PM
i think he had it set up so there would be a HUD as he walked around

H3lixFossil12:29 PM
but there was a significant enough delay that he said he wouldn't go running with it

nick_meynen12:29 PM
Except from peli cases are there any other (cheaper) brands that are suitable? Which ones are you guys using?

H3lixFossil12:29 PM
he just wanted to make some cool cyberpunk shit that gave him a HUD irl

jk. depends on what you want to do with it

Inne12:30 PM
@cyzoonic are the keycaps silicone or is the goal for the whole switch mechanism to be silicone based. Either sounds cool what where your challenges??

io Tenino12:31 PM
I have a friend that got a used pelican case from the DA's office in my town. Worked pretty well for his deck

H3lixFossil12:31 PM
peli cases are awesome for ruggedization, but i think it's rare that an individual will actually abuse a deck enough to necessitate that level of protection

io Tenino12:31 PM
Getting them new is pretty expensive I believe, but reusing something is in the cyberdeck spirit, ya know

cyzoonic12:31 PM
@Inne I am not quite sure as I don't know how it was done on the prop. As of right now I have surface mount buttons so the silicone would just push that down

H3lixFossil12:31 PM
i got a few on facebook marketplace for super cheap

cyzoonic12:32 PM
@Inne My challange is I have no idea where to start. I have never done silicon casting. I also have to find the right silicon (in Europe) and somehow add lettering as well.

H3lixFossil12:33 PM
I think there's a lot to be said for finding old laptop shells on the internet and gutting them and replacing the innards with your own ideas

H3lixFossil12:33 PM
assuming that waterproofing isn't on your "requirements" list

io Tenino12:34 PM
Honestly, I'm real interested in the eco/solarpunk side of cyberdecking more than the cyberpunk side. I think the idea of taking a bunch of different components and reusing them to make a functional, personal computer is really beautiful.

Nicolas Tremblay12:34 PM
@cyzoonic 3D print the top mold. Put a decal of the lettering. Pour in the silicone (Smooth-On is a great place to start). Smoosh in the board on top.

io Tenino12:35 PM
Taking old pelican cases, destroyed laptops, old screens, and knowing how to bash them together into something that works for you is really great.

Tom Nardi12:35 PM
Cheap, and nobody is going to miss them.

H3lixFossil12:35 PM
that's my biggest point of anxiety honestly. I have a beautiful AST NB-SX25 laptop/brick, but i feel like i'm throwing out a piece of history if i throw away the guts

H3lixFossil12:35 PM
it's thick enough to have a diskette drive

io Tenino12:35 PM
And having the experience and knowledge to fix your own custom electronics is amazing

cyzoonic12:35 PM
@Nicolas Tremblay thanks, I will look into it

nick_meynen12:35 PM
How you guys mount the assembled electronics inside a peli (or other) case whithout screwing inside the case?

cyzoonic12:36 PM
@nick_meynen See my deck, Pelican also sells an official mounting bracket for the inside. I made my own using a 3d printer

io Tenino12:36 PM
you can mount fasteners with epoxy and then screw into those fasteners

Gabe Lastname12:37 PM
I would like definitely to find a broken PowerPC-era metal MacBook to build inside of, I think that would be a great build.

thesebelik12:37 PM
That's definitely a lot of the reason why i'm building a deck, i want to teach myself how to make cool stuff from cheap/scrap parts

H3lixFossil12:38 PM
I think one thing that almost all deckers have in common is a hoard of extra components that will get used "eventually"

nick_meynen12:38 PM
@cyzoonic Looks nice, great idea. I was thinking to design some kind of spring clamps for easy removal of the electronics

io Tenino12:38 PM
the number of laptop motherboards I have sitting in a box is frankly reaching hoarder levels

DeltaWhy12:39 PM
is it possible to salvage a tablet screen to use in a deck? do they have a standard interface like LVDS/eDP?

io Tenino12:39 PM
just having things on hand that you can look at and can provide inspiration is really important

cyzoonic12:39 PM
@nick_meynen that would be cool, You could also use thumb screws

H3lixFossil12:39 PM
the personality trait that drives someone to scrap something together from scavenged parts runs deep in the community

Gabe Lastname12:39 PM
Can you boot those @io Tenino

Gabe Lastname12:40 PM
nice, I’m having trouble with the only one I have, otherwise it would be running a home server by now.

DeltaWhy12:40 PM
I got an android tablet with a broken port super cheap from a thrift store, was going to repair and use as a homeassistant controller or something, but maybe it's worth more to salvage the screen 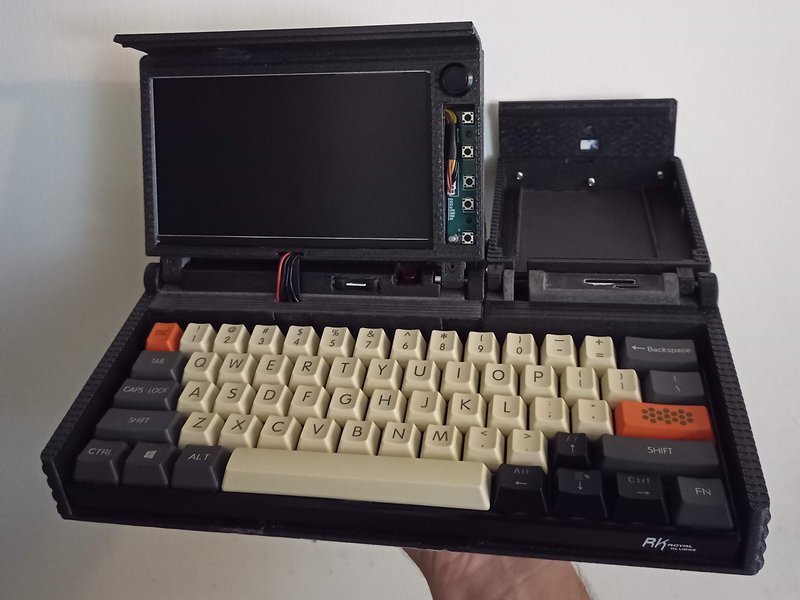 Gabe Lastname12:41 PM
if you can find the screen’s SKU you can search online for a custom controller, but generally no they do not use a standard interface.

H3lixFossil12:41 PM
the carbon set of keycaps is one of the greats

H3lixFossil12:41 PM
with all the hazard symbols

nick_meynen12:42 PM
@Will Sebelik also a great idea. Getting a lot of inspiration for my own build

it's heartbreaking to see a noob show up and ask "what's something cool I can make?"

on one hand, it's someone that wants to get their hands dirty with technical work and the act of creating something from parts.

on the other, they're just outsourcing their creativity

H3lixFossil12:43 PM
it's the artistic equivalent of hoping you get followers from a retweet

H3lixFossil12:43 PM
but i'm not gonna get on my soapbox about that

Dan (a8ksh4)12:43 PM
Well, give them advice on the parts that work together and it's up to them to find a neat way to put it in a box and call it a deck. lol.

H3lixFossil12:44 PM
i just want people to make something that will make them happy and not worry if other ppl think it's cool or not

nick_meynen12:44 PM
@cyzoonic I get the inspiration from our light switches here. They have 2 clamps on the side, turning the screws extends these caws so they are fixed inside their boxes. But i'm thinking now in a way to combine this clamps with the peli holders u using.

thesebelik12:44 PM
i feel like one of the main reasons people build decks is for other people to think it's cool

io Tenino12:44 PM
I think there can be a lot of value in replicating other's work. Especially if you're trying to build your skills

bootdsc12:45 PM
i really like to see things being recycled instead of just buying all new and printing a case

H3lixFossil12:45 PM
@Dan (a8ksh4) I think that was part of the reason we made the "quick start guide" on the cafe website

bootdsc12:45 PM
given enough time and money i could build anything. whats the fun in that though i'm not trying to be a factory worker

nick_meynen12:46 PM
@cyzoonic how did you the hdmi part, i want the schreen in the lid and the electronics in the bottom (below the keyboard). Did you use flex or a custom cable?

bootdsc12:46 PM
building a deck is really a lot more fun when you have a limited budget of $0 and have to be creative

cyzoonic12:48 PM
@nick_meynen This was a huge task, I found some HDMI cables that I could cut most the rubber off and fit through the hole that connects the lid to the base, I ran 2 of those.

io Tenino12:48 PM
Oh yeah, for sure. Somebody asked me if I would make them a Joopyter at some point. I was just curious, so I added it up, if I were to buy everything new, it would be around 200-300$

H3lixFossil12:48 PM
remember in the first matrix when he opens the book Simulation and Simulacra?

H3lixFossil12:48 PM
we had someone make a "book stash" deck before. that looked really cool

io Tenino12:48 PM
But most of these parts are stuff I found or had onhand, so it was a lot less when I built that.

io Tenino12:49 PM
@H3lixFossil that was such a cool deck!

Glinek12:49 PM
I think that big problem is that it is really hard to make deck that is like usable on normal day. I found it really hard to use my deck in every day life

Tom Nardi12:50 PM
@Glinek That's interesting, what did you struggle with specifically?

H3lixFossil12:50 PM
the most usable decks are made by corps and are known by the term "laptops"