A box arrived from Ukraine, the seller described the contents like this:

"Russian/USSR made Quartz Crystal Resonators 18 KHz. Crystals are in mint condition never soldered. Each crystal is in individual manufacturer's packing box with individual OTK certificate. Manufactured in 1989 Purchased from a storage of electronics manufacturer which is no more in business. "

Why choose these ? Well, there is no need of a socket (which would cost more than the tubes), the price is good (but increasing), 18KHz is not hard to work with (I found interesting dividers) and the look is awesome. A higher frequency means a smaller crystal, which would be less visually interesting and requires more flip-flops to divide down to 1Hz.

The plan is to

I have NO IDEA what that thing was used for. Why is 18KHz used ?

And I have no clue about the driving method because there are 3 active signals and not two, which is the norm I'm used to.

But let's start by opening the box: 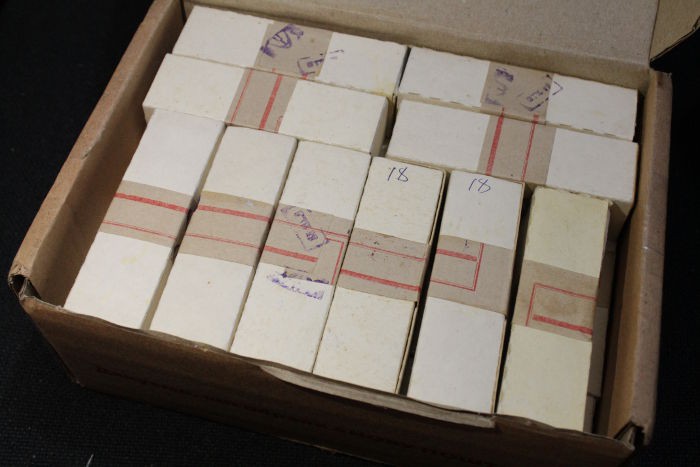 Each little box contains one glass tube and a "passport", a small sheet that describes the part: 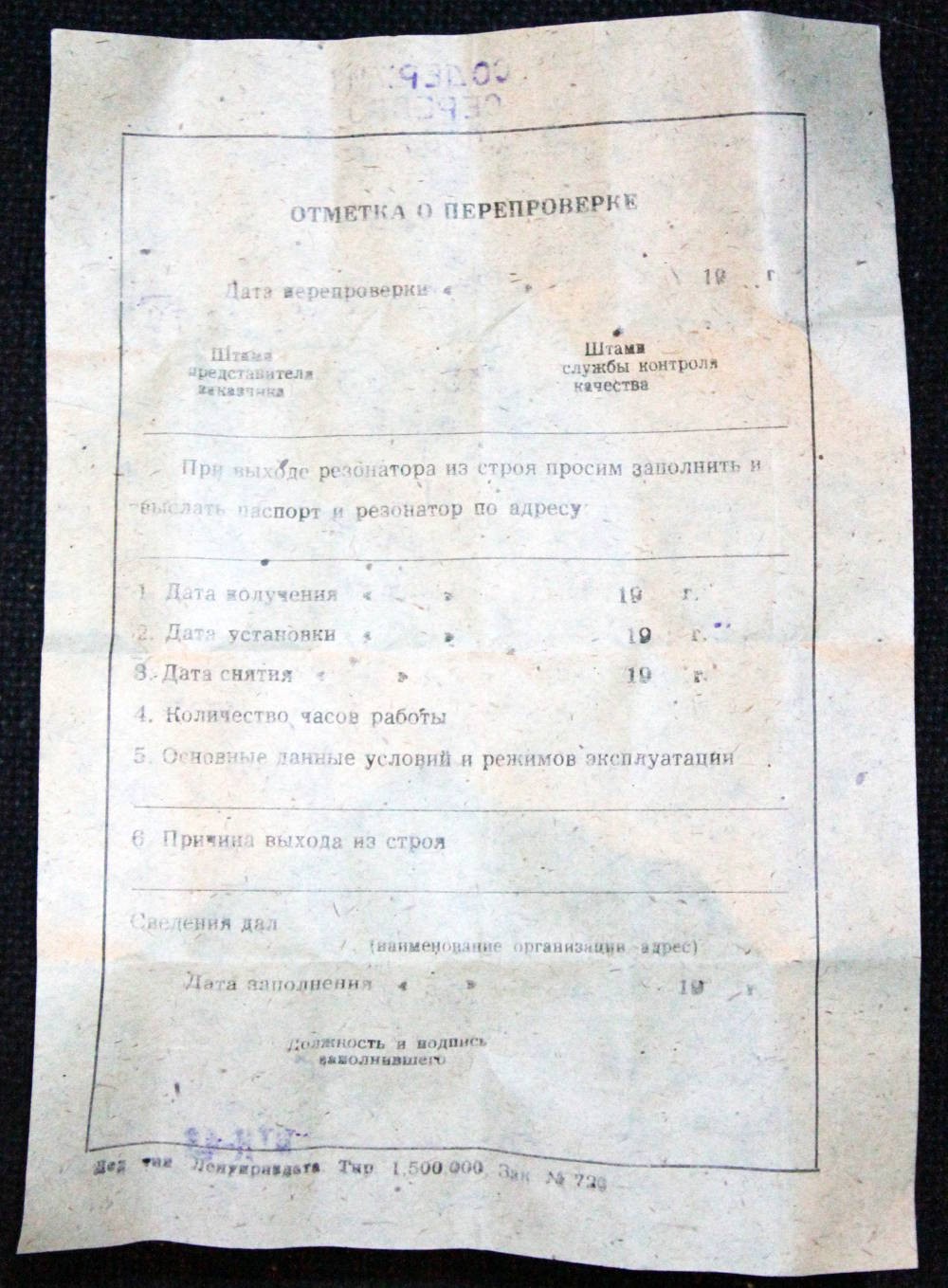 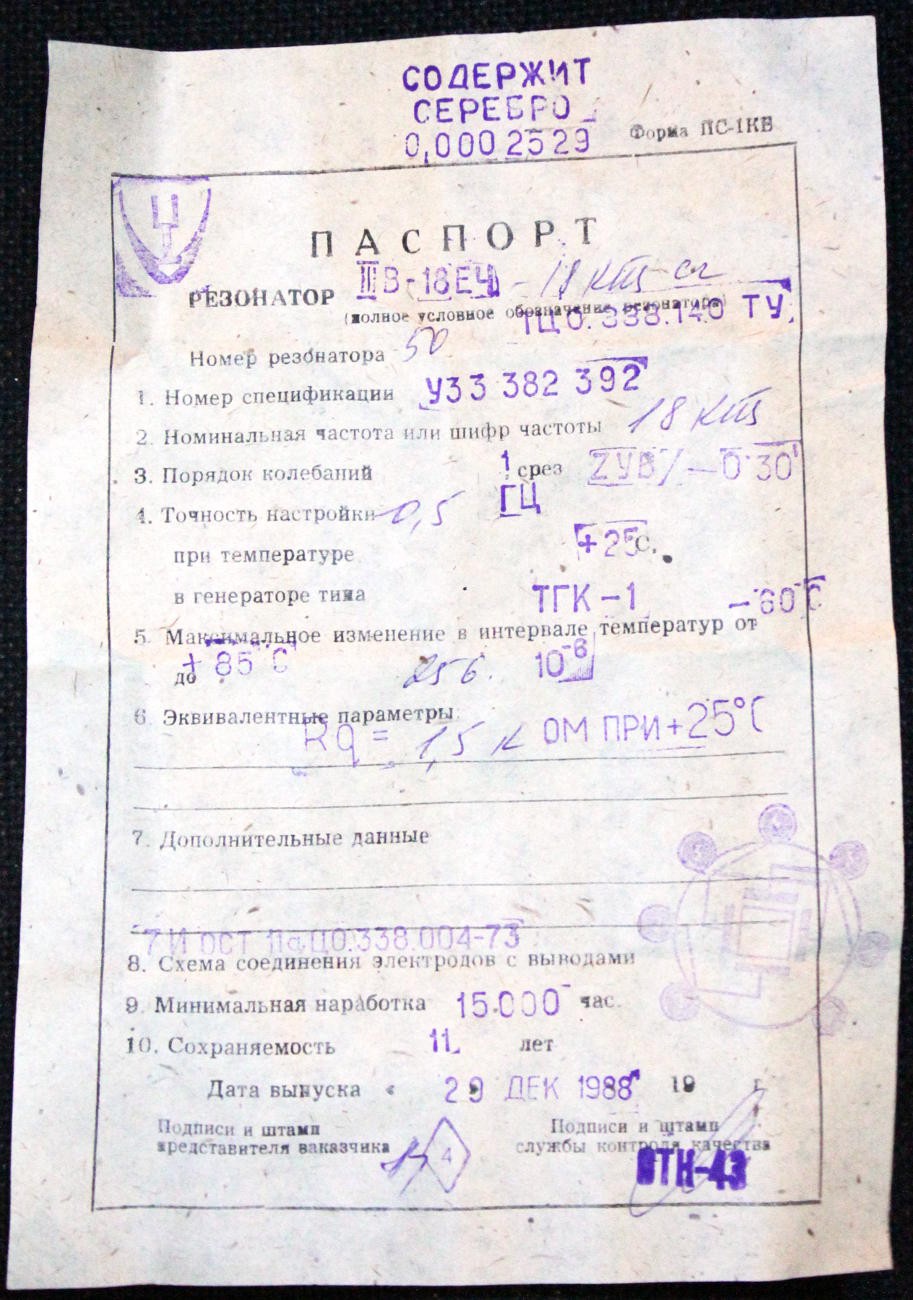 I'm sure that this last picture contains very interesting informations, about operating temperature and accuracy... But I can't make sense of them yet. Anyway, the date code is obviously 29 dec. 1988 (though Russia uses the Julian calendar, shifted by 13 days compared to the gregorian calendar we use in Europe, so yes, that's 1989 for "us").

The tubes themselves are great, though I have many questions about their design and use...

There are 3 electrodes, one at the back (next picture), two at the front, and one is 1/3 of the length only.

The above picture shows that 2 electrodes support the crystal at the exact opposite of the others. The distances are carefully chosen to reduce interference or dampen the oscillations...

I suppose that the crystal resonates in the bending mode, like a vibraphone plate. However I don't know how to drive it, what is the excitation electrode and the sensing electrode.

I suppose that the excitation is applied through the single electrode on one side, and the small electrode on the other, leaving 2/3 of the surface for sensing/collecting the charges. This structure does not correspond to the stamped logo on the passport, which describes a more classic structure with excitation on two opposite sides, and collection between the perpendicular electrodes.

I have noticed that the quartz bar is not square, but slightly rectangular...

The accuracy of factoty adjustment is 0,5Hz at 25 C that gives initial adjustment error up to 27,7 ppm (can be adjusted down to zero in the circuit)

The temperature imposed error guaranteed no more than 256 ppm inside whole range -60 to +85 C (given that curve is non-linear, between 15-35 C  is can be 10 times better)

Yes, low frequency crystals are not best timebase. The best is always between 4 and 5 MHz crystal. Just imagine the discrete parts flip-flops lineup :))

Some crystals exist that glow while resonating :) http://www.cdvandt.org/luminous_quartz_2.htm

Earlier, skaarj wrote that 1.5k ohms was "variation in the electrical resistance". I'm surprised there are two interpretations :-)
I found out later that impedance was a pretty important characteristic though the other parts in the circuit influence that, too...

Dividing down a 4096KHz crystal requires at least 22 FF... and many of them very fast, so power draw is higher...

Those glowing crystals are so weird, I don't read much dutch but I learned something new today, thanks !

Word "variation" is not mentioned there at all in connection with resistance :)

It does say exactly "Equivalent parameters: Rq=1,5kOhm at 25C"  While R is resistance, q must refer to Q-factor.

But since crystal has 3 terminals, i can not comment which two terminals we should find this resistance between.

actually there are 4 terminals.

but the resistance is extremely high so it must be impedance at resonance...

Thanks for the Russian lesson everybody :-)

0.5Hz is quite a lot of error for a clock source... It will be fun to tune... But if you say that the vacuum tube shields the quartz from temperature variations, that's an unexpected benefit :-) I have worries about the high temperature-dependent drift of the germanium transistors...

Those are quartz crystals in
subminiature vacuum tube package - the same packages as the vacuum tubes
in my project update log here - https://hackaday.io/project/10579/log/35223-update-log-4-vacuum-tube-sound-system-part-1-sound-processing

but beware, they are not immune to vibrations and shocks - the quartz
plate can easily break if the tube accidentally falls from your desk -
it happened to me

The design was... xeroxed from Luftwaffe many many years ago (like most
of their soviet tech)- but because Germany does not have too much quartz
in their underground, they abandoned the project and focused on their
state of the art L-C oscillators

Guaranteed to function for minimum 15000 hours (around 8 years in continuum functonality)
The variation in the electrical resistance is +1.5 kOhm at a variation of +25 degree celsius

The frequency error is maximum 0.5 Hz
They were manufactured 5 days before Christmas in the year 1988.

But at least that gives an estimate of the expected drift : there are 3600 seconds per hour, so there can be 2.5s drift per day (supposing no temperature drift)