A project log for Fall Detector Wearable for Elderly and Clinics

Combining a 3-axis accelerometer with an Arduino to create a networked fall-detection device and alert system for individuals at risk. So I've settled on building the prototype with my Photon Core from Particle.io. It has built in wifi and good support documentation, so I don't need to worry about connectivity. I have connected the 3-axis accelerometer outputs to the A1, A2, and A3 pinouts on the board (white, orange, and yellow wires). The black wire is a ground and is connected to the GND pin on the same side. I did not need to apply voltage to the accelerometer, and the Photon Core would actually blink and shut-off when I tried. I've also connected a green LED just to show it's own. The push-button to the top right will be incorporated later as an alternative alerting mechanism. 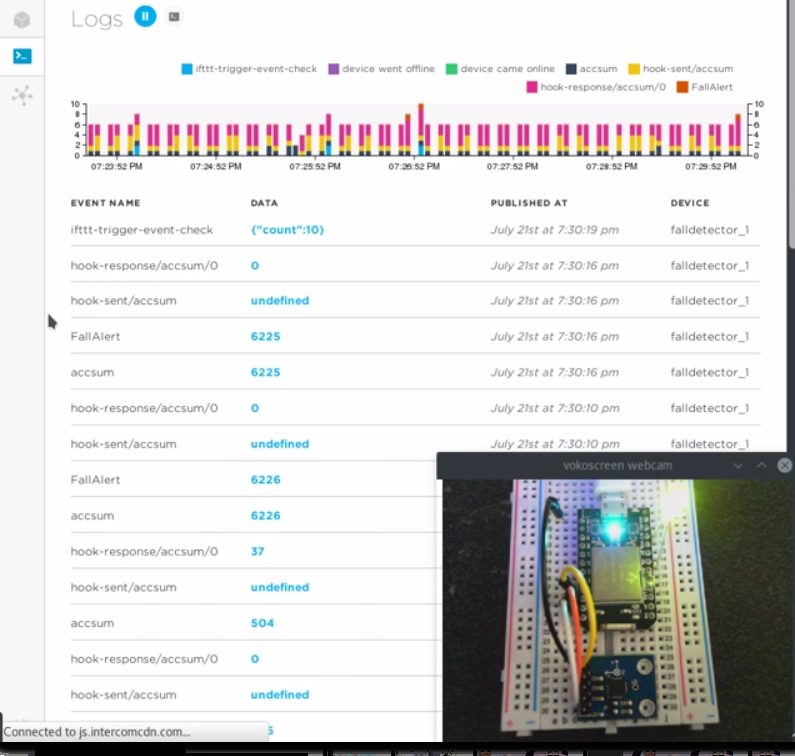 In the picture above, you can see the log from Particle.io, as well as the raw accelerometer data (accsum) being plotted on the "Patient Fall Activity Monitor" via Thingspeak. You can also see that email alerts were received within seconds of the detected fall on my Android phone!

Now that the basic code is in place to to talk to the online services, I'm going to focus on tweaking the code for fall detection. Currently, I'm just combining the raw values of the 3-accelerometers into a single variable. When that variable crosses a threshold, it activates and alerts to a potential fall.

Again, I'm self taught, so I'm learning along the way and most likely doing a few things inefficiently. Please let me know if you have suggestions or can help with any of this project!

4) design 3-d printed enclosure for board, accelerometer, and battery.

I'll clean up my code for the above and post that as an update soon! Very excited that it's starting to come together! :)